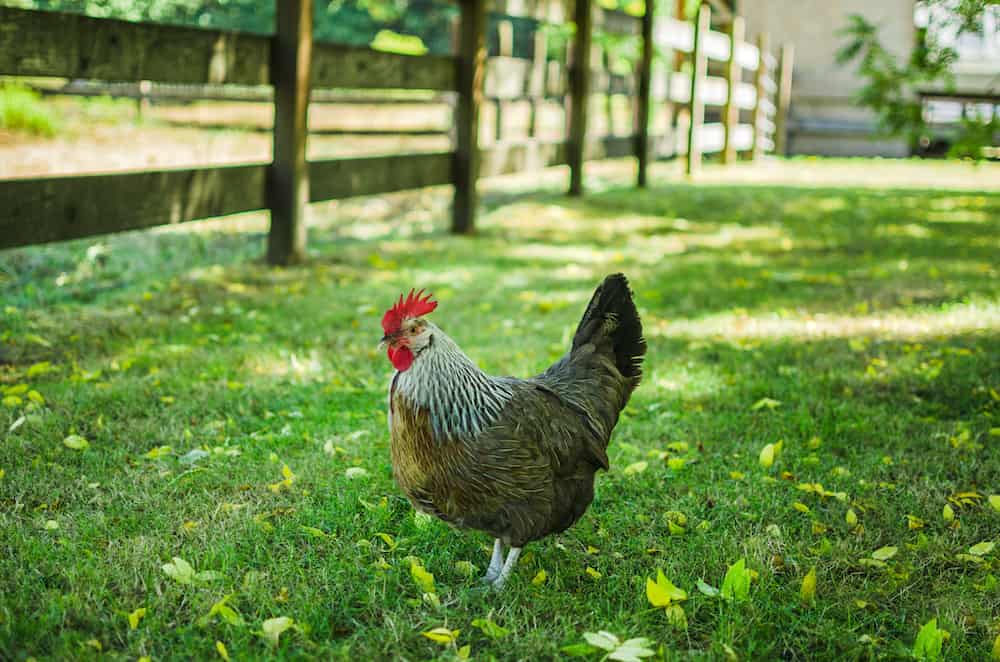 Creating a homestead can be a difficult process if you’re not sure what type of livestock can help sustain your rural lifestyle. One of the most beneficial is to invest in is the Ameraucana chicken.

This unique chicken breed is fairly new and only made its first appearance in the early 1970s.

The Ameraucana breed of chicken is known for being ideal for rural areas due to its skittish nature.

They don’t do well in busy backyards and suburban areas. They can be susceptible to stress when placed with other livestock.

You’ll love their blue eggs. They produce meat but it’s not the primary reason for raising them as they aren’t known to be meat birds.

Many people enjoy the Ameraucana breed because of its puffy and comical cheeks, while others love the chicken’s disposition.

The chicken’s personality aside, they are very bright and curious birds that make amazing pets.

Lastly, they work well in multiple climates and are very versatile.

Let us learn more about the Ameraucana breed to help you understand if it’s right for you.

History of the Ameraucana Chicken

The Araucana is a popular chicken breed from South America and has slight defects that cut down its life expectancy.

On that note, the Ameraucana chickens were bred in the USA in the early 1970s. The goal was to remove a genetic defect, a lethal gene, the Araucana suffered from. It presented as an ear tuft and increased the death rate of baby chicks.

After a decade of breeding, the Ameraucana was recognized as a breed of its own.

As of 1984, the American Poultry Association recognizes the Ameraucana as a standard breed.

They also have included eight different color variations of the species and noted their different characteristics.

More of the Ameraucana breed survived birth and were able to live healthy lives.

This produced a healthy chicken that could still produce high-quality eggs, plumage, and meat.

Additionally, their temperament was less aggressive and friendly.

It is one of the most versatile chickens when it comes to looks. It can have up to eight different colors. Each chicken includes its unique palettes, which are a mixture of black, white, blue, and brown.

This allows each chicken to be unique and have stunning color varieties. They are beautiful and eye-catching to keep on your property.

With their thick feathers, they are considered a winter hardy bird, which allows them to survive in a multitude of different climates. In addition, with their small pea combs, they aren’t as susceptible to frostbite.

Their beard and muffs are often puffy and give them a distinct silly chipmunk-like face. They do not have ear tuffs.

Other characteristics include deep red eyes that look sharp and intimidating, while their puffy cheeks and skittish personality make them less scary.

Weight-wise, females range from five to four pounds, while males can be as heavy as up to seven pounds.

As for the chicken’s disposition, the Ameraucana is very friendly but can be easily scared away by quick movements and loud sounds.

They are often found in flocks chattering with each other, and you won’t find some of them having problems interacting with one another or humans.

Do note that they don’t do well with other farm animals, so it’s best to keep them in a secluded area where they can roam around freely. This breed loves to forage.

This will keep them happy and stress-free.

Additionally, they may enjoy having you around them, but aren’t as friendly as other chicken breeds and don’t want to be touched or petted.

Other dispositions known to breeders are that not only is the Ameraucana’s appearance variable, but also its personality.

They show a wide variety of behaviors which makes certain traits hard to pinpoint at times.

This is likely due to the breed’s upbringing and genetic differences between the standards.

Roosters tend to be a bit more aggressive and territorial, while the females generally do well with each other but need to be given their personal space.

With their large frame, these chickens should be kept in large cages, providing plenty of space width-wise.

This can help prevent their stress levels and skittishness from spiking.

Ameraucana hens were bred with a blue egg laying gene. Their eggs are either light blue or all white.

Reliable layers, this breed can produce up to three to four eggs every week, so they are ideal for egg production.

The eggs themselves are medium in size and can either be used for food or as starter eggs.

Some owners begin to worry as the breed doesn’t produce eggs until 18 to 20 weeks, or around five to seven months.

Compared to other breeds, this is later in the game, but they end up producing more at a quicker rate.

Plus, the eggs they produce are of higher quality.

There was a rumor going around that Ameraucana eggs were more nutritious than others, but that theory was debunked later as a marketing ploy.

The eggs contain the same nutritional content as other eggs.

Lastly, if you are interested in hatching eggs, the Ameraucana is a non-broody breed. This means you will need to invest in an chicken egg incubator.

As mentioned, the Ameraucana breed of chicken originated from the Araucana chicken, which was originally from Chile.

Over the years, they have produced genetic differences, as the Ameraucana has been bred to have thicker feathers, do well in multiple climates, and have less recessive genetics.

Many people tend to confuse it with the Easter Egger chicken due to the similarities in looks and production of slightly blue eggs.

However, they have completely different origins, and the Easter Egger does not have a breed standard.

The Ameraucana has only existed since the 1970s and only were recognized as their own standard back in the 1980s.

As with any chicken breeds, the Ameraucana is fairly healthy and doesn’t pose any large health risks for its breed.

It doesn’t have any known genetic deficiencies that may cause long term illnesses or diseases.

The species is known for being one of the healthiest that has been brought over to America.

The expected lifespan of an Ameraucana breed is approximately seven to eight years if kept healthy. Keep them dry and draft-free in the cold months.

Of course, the chicken is still prone to common chicken diseases, parasites, and other small issues if not kept in a good environment.

The only issue is their skittish disposition, which only gets worse if they are not kept in a safe environment.

Here’s a good video that showcases a typical Ameraucana chicken:

Are Ameraucana Chickens Right for Your Homestead?

If you’re looking for a family-friendly chicken, these are lovely birds.

With their docile nature, they make easy pets but aren’t considered lap chickens. While it can be people-friendly, it prefers to be alone.

Raising them from chicks instead of adult birds can make them more adaptable.

Additionally, the chicken has bigger bodies than many other chickens and needs to have adequate space. This means you’ll need to plan for a larger chicken coop with a minimum of 3.5 – 4 feet per bird. Include also free-range space.

This American breed is accustomed to cold climates but must be kept in a draft-proof coop otherwise, they may get sick.

They do enjoy their coop, but they will also benefit from being able to roam around.

If you’re looking for a few beautiful blue eggs every week, then this breed is ideal.

Ameraucana roosters can be aggressive at times and work hard to defend their flock. They should be separated and have their own space.

The females are generally easy-going and not aggressive, but they can get irritated with each other at times.

If you have the money and space, it’s best to give this breed plenty of space for the flock and to roam around.

As a homestead chicken, they can be pretty useful if you’re only planning to support yourself.

If you want to branch out, we recommend getting other types of chickens.

Other breeds will give you better egg production and be able to support your family while also being able to brood the eggs themselves.

The Ameraucana is considered to be a rare breed in the USA. Expect to pay more for chicks than for other breeds.

While they generally do well in most climates, their origins are from South America so they would benefit more from a similar environment.

If you’re looking for a steady way to support you or your family with their meat, eggs, and plumage, then these will suffice. With their blue egg gene, you will enjoy adding these hens.

If you’re looking to start a farm or have a larger production, we recommend skipping this breed.

Looking at their overall cost, they can be worth the investment as long as you understand that Ameraucanas won’t start producing eggs until almost six months after they are born. This is longer than other breeds.