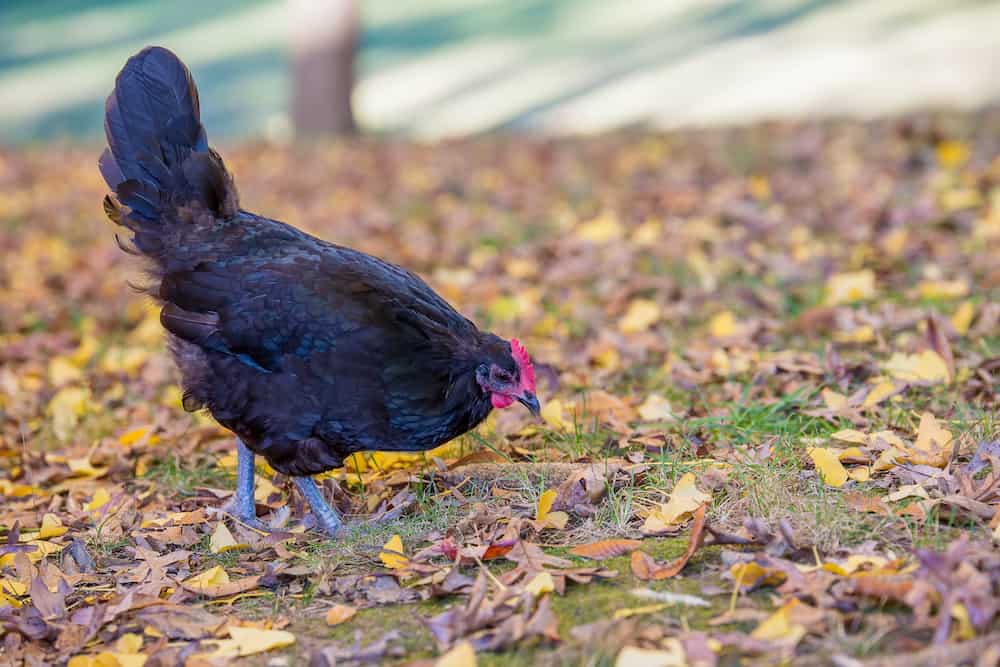 Australorp sounds like a unique name for a chicken, but you’d be surprised at how common they are.

You’ve even likely seen one, as they are a popular breed for homesteaders. They are hardy in cold as well as hot temperatures.

In addition to being a dual purpose chicken, they are known as “egg-laying machines”. They are a beautiful chicken breed that quickly became the honorary national bird of Australia.

This Australorp care guide explains the need-to-know information about these chickens. You’ll also learn what they offer to provide you a more productive farm.

Australorps recently received their name, as they were initially known as William Cook’s Orpingtons. At first, they were imported as one of the few birds suitable for the climate’s harsh climate.

Natively, Australorps aren’t particularly useful egg layers, but once they were cross-bred with Rhode Island Reds, they became more efficient.

Their history begins in England, and they were required to help produce higher quality poultry. In Australia, farmers wanted a utility bird that would first, lay eggs, and second, produce meat.

To create a dual-utility bird, they were crossbred with several poultry breeds, including Leghorns, Minorcas, Langshan, and Rhode Island Reds.

By 1923, Australorps were able to lay up to 310 eggs per bird per year, which enabled the creation of egg-laying contests.

There are a few color variations when it comes to this breed, and breeding societies recognize some of them.

You’ll most likely come across dark Australorp, although there is a possibility you might find blue or white color variety. Their skin color is white.

Interestingly enough, South Africa also has its version of Australorps with wheat-colored feathers, so they appear more golden.

Overall, they are relatively hefty birds with extremely puffed breasts and an upright stance. They have soft feathers, and they fit tightly to one another, which helps them look more elegant.

Often, the black feathers may look iridescent in the sun, giving them a beetle-green sheen that is recognizable from afar.

As they walk, they appear to have authority behind their steps and will garner everyone’s attention.

You’ll find a striking contrast between their coat and their comb, earlobes, and waddle since they are red. Also, it’s important to note that their comb shouldn’t have more than seven points.

The bottom of a black Australorp foot will be white with four toes per foot, and their legs are typically black or slate.

Their eyes are very recognizable as well since they are deep black, as is their beak.

On average, males will weigh up to ten pounds while the hens may reach eight pounds.

Knowing this breed of chicken’s characteristics, such as how they behave, is essential for you to raise them well.

Before introducing new breeds, it’s important to consider whether it’s suitable to be around kids and other animals. You won’t want breeds that don’t work well with each other or family members, so their temperament is essential to consider.

The good news is that Australorps are an extremely friendly large-breed chicken. In fact, they are often considered one of the friendlier poultry breeds because they are so docile.

Chicken keepers will note they tend to appear shy at first, until they have had time to get comfortable with their new family.

Once they have settled, they may follow you and your kids around the yard. You can even garner their favor by giving them treats as they follow you around.

These Australian chickens are also known for their gentle nature, which makes them a fantastic pet for you and your children.

They will attach to you just as much as you do them, so they’re great for family-friendly backyard farms.

Another advantage of their temperament is that they do well in small and large acreage farms. You can easily keep your Australorps in a confined coop though it’s preferred to allow them to graze freely.

Like any farm animal, they are prone to do better if they can free-range. They enjoy being active, so giving them a reasonable amount of space to move around, along with fresh air, is essential.

You will also want to note that Australorps hens are prone to becoming obese if kept in containment.

Fortunately, for farm owners who prefer to have as quiet of an environment as possible, Australorps are not loud.

For how large they are, they are also incredibly quiet and delightful. They’re not flighty nor are they noisy, even when surrounded by other animals.

Also, they don’t have an egg song, which makes them one of the quietest types of chickens you can find.

It’s important to remember that Australorps are relatively heavy birds, which means they’re not likely to fly often.

Likely, they will simply use their flight to get from the ground to their sleeping spot or laying box. This reason is another point as to why they’re great for kids to handle.

How Long Do Australorp Chickens Live?

Depending on health concerns and living conditions, Australorp chickens can live up to ten years, with the lower end being six years.

With their family-friendly nature and since they can be your kid’s pet, knowing their lifespan important. Also, it’s good to know to to ensure your farm continues to produce eggs regularly.

All About Australorp Eggs and Egg Laying

Another reason Australorps are popular is that they don’t need to be encouraged to lay eggs. This breed is also productive all on its own, without needing coercion or even lighting.

One of the primary issues farmers have with these chickens, though, is their broodiness. Although Orpingtons are known for their impressive broody behavior, Australorps are slightly different.

Some breeders say they are average nest sitters, with some saying they aren’t known for this ability.

That said, they are good mothers. They have good mothering instincts, especially if they sit to term, and they’ll be likely to dote over their chicks.

How Many Eggs Do Australorps Lay?

As we explored in their history, Australorp hens are very productive egg layers. However, over the years, their productivity has decreased slightly, although they are still ahead of other breeds. Today, you can expect Australorps hens to lay approximately 250 eggs per year.

Every week, you could collect up to five medium to large-sized eggs per hen. Having several chickens means you will have several eggs each day from your homestead.

How Old Are Australorps When They Start Laying Eggs?

Compared to the average chicken that may start to lay eggs at six months, this breed can start a little earlier.

Some suggest that Australorps can begin laying eggs between 16 and 18 weeks. Other farmers suggest their chickens start at six months, like other breeds.

What Color Eggs Do Australorps Lay?

Depending on where you live, white eggs and light, medium, or dark brown eggs could be the norm.

Sometimes, homesteaders may have a brown egg with a more pink undertone, but they are still highly distinguishable from white eggs.

How Long Do Australorps Lay For?

You should expect your Australorp’s first year of life to produce the most amount of eggs. Typically, between the ages of six and 18 months, they’ll have the highest levels of productivity.

Some suggest there is a rough formula to follow to measure your chicken’s output. The rule of thumb is your chickens will lay 80% as many eggs as they did in the previous year.

However, this theory hasn’t been scientifically proven, nor is it accurate for every hen.

You’ll also find the length of time your Australorps lay for will vary depending on their health and other factors. Your hens could lay past four years, but you can guarantee their egg production will decrease as they get older. 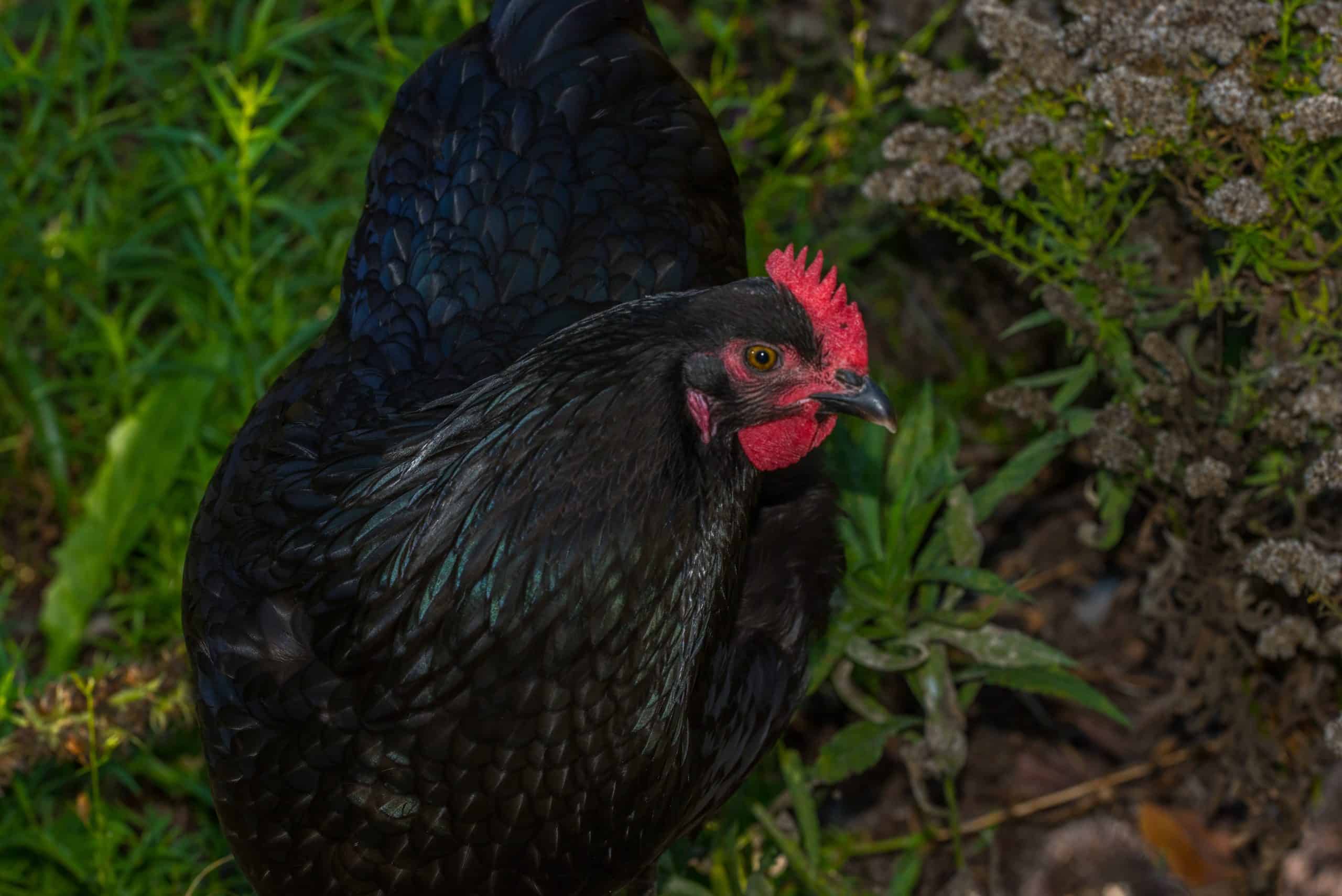 Apart from knowing their appearance, their productivity, and their egg-laying capabilities, there’s plenty more to learn about these chickens.

Fortunately, there’s not much you’ll be responsible for in terms of caring for your black Australorp rooster. They don’t need any special techniques for grooming apart from what you’d do with regular chickens.

Also, since their bodies are quite heavy, they’re unlikely to get far with any signs of flightiness, meaning their wings won’t need clipping.

How you feed your black Australorp chicken or rooster will have a significant bearing on their development, as with any animal on your farm.

They are a chicken breed that can eat similarly to other types of chicken, with vegetarian diets seen as the best option.

You can also easily find store-bought food that will meet all of their dietary needs.

Feeding your chickens with a mix of pellet feed, corn, soybeans, vitamin and mineral supplements, and medicinal ingredients is ideal.

It’s also vital to find a feed that contains preventatives to help protect their immune system from bird diseases. Many homesteaders also find that growing their chicken feed is the best way to control the diets of their Australorps.

With that said, you should always choose a feed that doesn’t contain unnecessary ingredients and preservatives. Keep the feed in a chicken feeder to keep it clean.

You can also allow your Australorps to graze your fields to find any hidden morsels and bugs. You can also give them strawberries and fruity treats.

Not only will they love to roam around, but it will also encourage them to get enough exercise.

Like their maintenance and care, there aren’t many health issues to consider when it comes to raising Australorps.

On average, these chickens will live between six and ten years, depending on the hen.

If you’re in the market for an easy-going bird that you can rear in an assortment of environments, Australorps are your best bet.

They don’t have a particular preference for a specific type of weather since they’ve been bred in England and Australia. Fortunately, they continue to be productive egg layers even in the cold temperatures of winter. They are very cold hardy.

They thrive just as quickly in hot weather, making them one of the most natural breeds to have at your farm. In the summer, though, you must provide them enough shade to cool down on the hottest days. It’s important to give them relief from heat.

Remember, their feathering is jet black, and having accessible shade 24/7 can assist them with preventing heatstroke.

As previously mentioned, Australorps fare well in containment and free-range systems. If you want to build a coop, it’s ideal for you to have at least five feet of space per bird to keep them confined.

It’s also essential to ensure you have enough protection to keep your chickens safe from predators. This is the most important thing to note about their well-being.

Keeping predators at bay by securing the area with chicken wire and give them safe shelter in a chicken coop.

When it comes time to make their house, ensure there’s more than enough ventilation.

Fresh air is essential for a backyard flock, as is access to light inside of the house.

As with any chicken, take the time to make it easy for you to get in and out of so you can keep their space clean and pest-free.

Are Australorps a Good Choice for Farms?

Yes, Australorps are a friendly and happy-go-lucky chicken breed that produces a substantial number of eggs. This dual purpose bird will serve you well. Their quality meat is known to be equally as delicious as their eggs.

As one of the better breeds of chickens to have on your farm around other animals and children, they’re ideal to raise with a current flock. Whether you want it primarily for meat production or for eggs, it’s a top pick among backyard chickens.