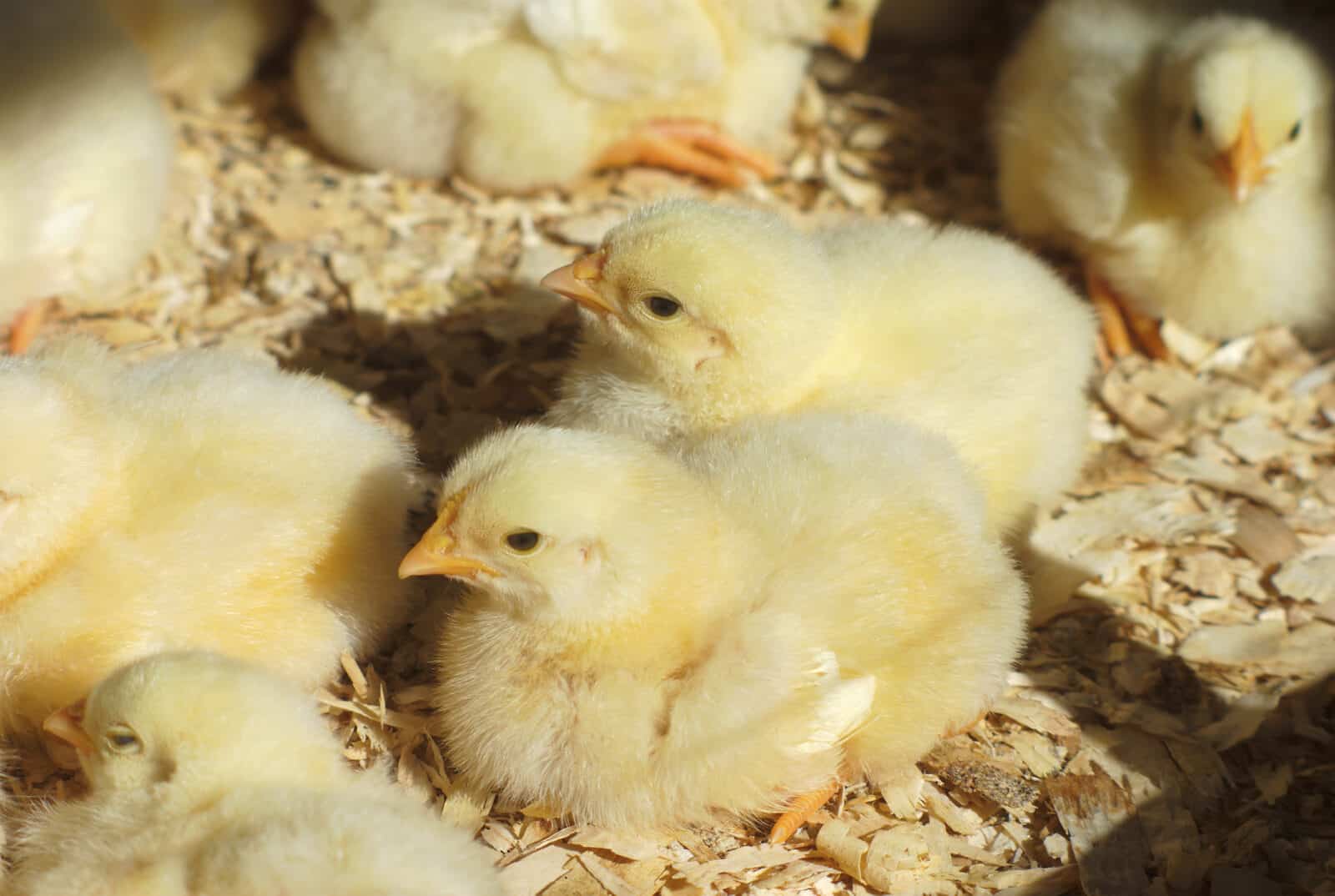 Keeping your flock’s health in mind, learn about pine shavings for chickens along with less toxic alternatives. While pine wood shavings do work as chicken coop material for insulation, you may want to consider other options such as sand.

The problem with using pine shavings is the abietic acid from pine resin which can damage lung cells in chickens. Chickens are exposed to abietic acid through inhalation. They will also inhale the fine dust from the shavings. The aromatic compounds can negatively affect liver functioning as well.

There are pros and cons associated with using pine shavings as bedding material and for lining and insulating the coop. Here we explain the debate on whether using pine shavings for chickens is the best choice for safety when there are many other excellent chicken coop bedding options available.

Pine shavings are simple wood chips made from pine wood. There are many different kinds of wood shavings available for chicken bedding material, but pine shavings are quite popular with most chicken owners for several reasons.

First, pine shavings are more absorbent than other wood shaving options, such as aspen shavings. In addition, pine wood shavings have good insulating properties, are quite affordable, and can easily be used with the deep litter method and composting.

These are just a few reasons why pine shavings for chickens are so popular. Unfortunately, they do come with some disadvantages as well. The most pronounced disadvantage is that pine shavings contain some toxins, which can have some harmful effects on the lungs. In addition, chickens will inhale the fine particles and dust in the shavings.

Pine shavings are considered a good option for chicken bedding materials. They are readily available and some experts believe they are safer and less dusty than many other options on the market today.

When choosing pine shavings, be sure to get shavings that haven’t been treated with chemicals, as these might cause some health issues for your chickens. Even though chicken keepers use lots of different shavings, some are not as advisable as pine shavings.

In addition to pine shavings, using any wood shavings for chickens comes with some issues.

Benefits of Using Pine Shaving in Your Chicken Coop

Here are some of the main advantages of using pine shavings as chicken bedding for your chicken coop.

Pine Shavings Are Dry and Absorbent

While there are many qualities that chicken bedding needs to have, absorbency has to be one of the most important. Chickens tend to poop wherever they are, including inside their coop. Since chicken poop tends to be quite moist and sometimes runny, if the chicken beddings within the coop aren’t absorbent enough, the coop will end up being soggy, smelly, slimy, and rotting very quickly.

Therefore, the more absorbent the bedding material, the less messy the chicken coop will be, and the less frequently you will have to change the bedding. As absorbent as pine shavings are, they aren’t the most absorbent option available. That honor goes to sand.

Pine Shavings Are Great for the Deep Litter Method

Whenever the existing bedding gets wet and stinky, add more pine shavings and mix them with the old stuff. Pine shavings are some of the best bedding for the deep litter method.

There are two main reasons why the deep litter method is quite popular with most homesteaders:

Using pine shavings, even when not in the deep litter method, can provide your chicken coop with some level of insulation and, therefore, warmth during the winter months. It is, however, advisable to keep your chicken coop well ventilated and draft-free.

Pine shavings happen to be very affordable—cheap, even! There are some cheaper, even free options, such as grass clippings and dried leaves, but these aren’t quite as durable and absorbent as pine shavings.

Pine Shavings Are Comfortable for the Chickens

The pine shavings are so warm and comfortable that sometimes your chickens may even lay eggs in them. You will often find that putting in a fresh layer of pine shavings excites your chicken. They will want to walk around, lie in it, and even scratch it like they are looking for food.

There are also other advantages, such as pine shavings being readily available, lightweight, and quite easy to store.

As a new farmer raising backyard chickens, it might surprise you that chickens don’t need bedding in their chicken coop. At least not in the same sense as other farm animals need animal bedding. For example, cows and calves need animal bedding to lay on at night to avoid the cold hard floors. Most chicken breeds only need roosting bars.

The bedding, therefore, is for waste management (chicken manure). The best bedding for your chicken coop is whatever will work as excellent chicken litter, which pine shavings do not.

Pine shavings, like wood chippings, tend to be a bit dusty. This is not only going to give you a bit of a difficult time when it comes to cleaning out the coop, but it will eventually cause respiratory problems in your chickens if you use them long-term. This is especially true if you also have baby chicks in the coop.

Pine Shavings May Have Pathogens

Since pine shavings or pine needles are organic, the chances that they may harbor some pathogens are very high. One of the main reasons why most people raising baby chicks or chickens want organic bedding is so they can use the resulting compost pile when observing the deep litter method.

However, for this to work, you need the bacteria that come with organic bedding. This means that you are essentially welcoming bacteria into the chicken coop. Couple that with the moisture from the chicken poop, and you have the perfect breeding ground for pathogens such as E. coli, mold, and coccidiosis.

Even though pine shavings have a few disadvantages, they are a choice for those who want to have organic bedding for their chicken coop. However, considering the negative health impacts that pine shavings can have on chickens, then you are better off using something like sand.

Sand, therefore, happens to be the best bedding available. One of the main issues with sand is that it can be quite expensive in the long run and a little cumbersome to use and change. It is, however, perfect for several reasons.

Another issue is that chickens tend to dust bathe in whatever bedding material they have in their coop. In most cases, if the poop in the pine or straw materials hasn’t dried, your chickens will end up dust bathing in some of it, which wouldn’t be the case when you use sand because the poop will dry out rather quickly.