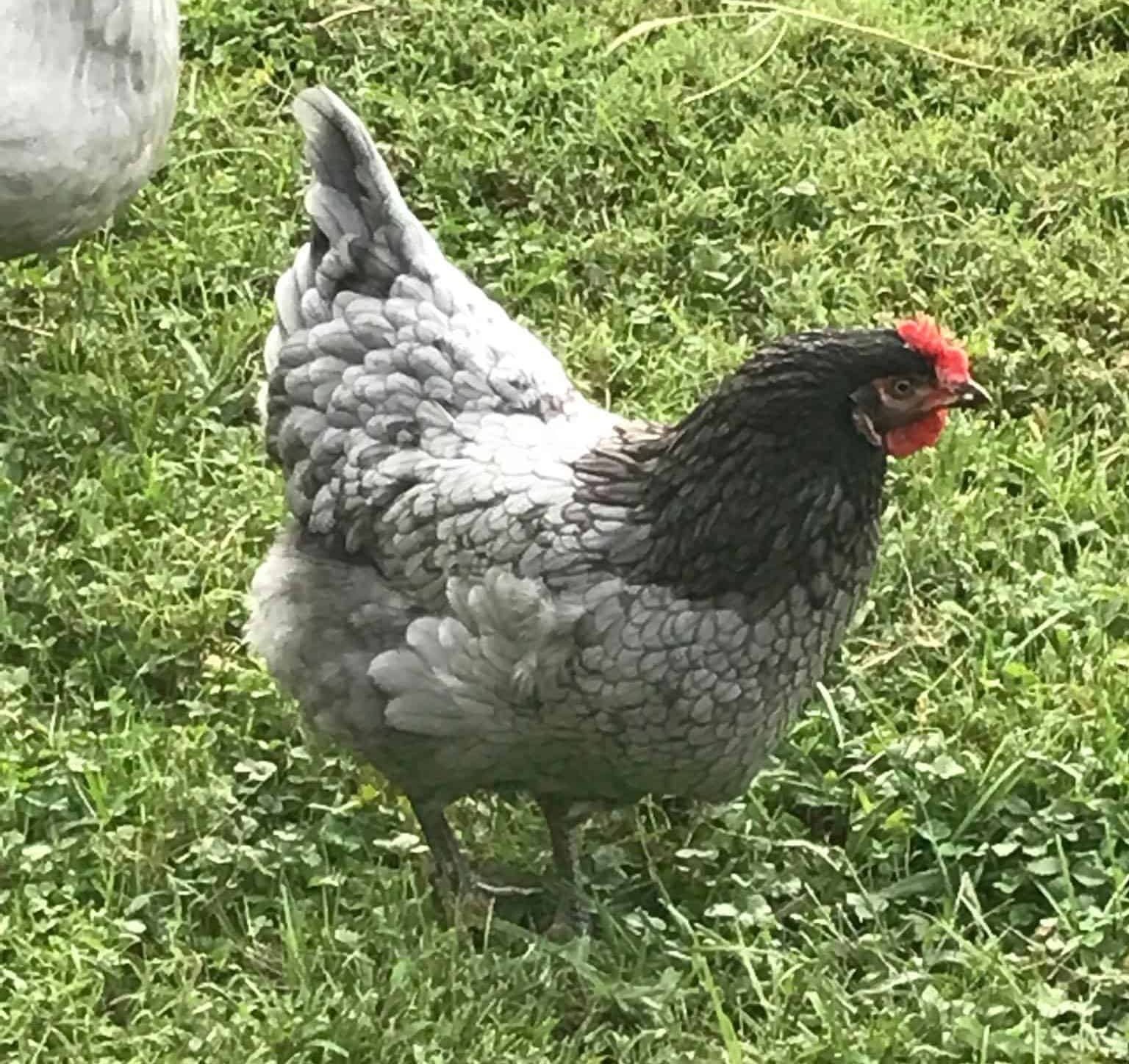 If you like to raise chickens that require minimal work, and you love fresh eggs, the Sapphire Gem chicken is for you. These medium-sized chickens have fun personalities and are great with kids.

Sapphire Gem hens will lay nearly 300 large brown eggs a year. This makes them a good choice if you are wanting prolific layers.

They are also fairly cold and heat tolerant.

It’s a relatively new variety and can be difficult to find. They’re considered designer chickens because they are highly sought after and not mainstream.

Sapphire Gem chickens are a cross between hybrid and heritage chickens. It’s thought to be Barred Plymouth Rocks (hybrid) cross-bred with Blue Plymouth Rocks (heritage). They originated from the Czech Republic.

If you can find Sapphire Gems to buy — they are a bit hard to find in many areas — these are ideal chickens for someone looking to start or add to a mixed flock. Learn more about these easy-going hens and roosters below.

The Sapphire Gem chicken has many original features. It differs from other breeds of chickens by its distinct colors, size, personality, and eggs.

Sapphire Gem chicken feathers have a blue-to-lavender color, hence the name Gem. Both genders are mostly blueish with light and dark gray feathering. Some refer to them as a lavender chicken.

Their coloring is due to the Dominate Blue gene when they were crossbred with Blue Plymouth Rock and Barred Plymouth Rock breeds. Their feathering is ornate and makes them distinct.

A Sapphire Gem rooster will most likely have a white dot on his head. Adult males are mostly blue in appearance and often have some barring.

The hen will have a grey or golden-like ring around her neck.

Note, Sapphire Splash chickens sport a mixture of varying shades of gray plumage with some specks of dark feathers.

This chicken stands more upright and has an upright appearance. It’s similar to Plymouth Rock chickens in this regard. It is a medium-sized bird with a single comb on top of its head, which serves many purposes.

At maturity, they weigh:

These chickens have single combs. Small combs can indicate the pullet isn’t mature yet to lay eggs.

The Sapphire Gem rooster’s comb assists with attracting a mate. The comb of a rooster is large and noticeable to show females that they can produce healthy offspring. A hen’s comb is smaller but still just as attractive to a rooster.

A normal comb for most breeds is most likely red, purple, or black. If you touch the chicken’s comb you will notice the soft, elastic feel that indicates the chicken is healthy.

Unlike many chickens, Sapphire Blue Plymouth Rock’s are docile and quiet. They are among the best chicken breeds to raise in your backyard.

They like to cuddle and receive attention from their owners, which makes them great pets. If you are looking for a lap chicken, look no further.

They also get along well with other breeds though they tend to be lower in the pecking order because they aren’t aggressive. They also like to stay busy. There are chicken toys available to prevent boredom.

Keeping predators away will not be a problem because these chickens make excellent security. They will make noise and flap their wings to warn the other chickens of impending danger. Still, ensure their coop and chicken run space is secure.

Sapphire Gem chickens like to have their space. Be sure you have four square feet per chicken. The more space, the healthier and happier all the chickens will be.

Free-ranging your chickens is acceptable all year long, but they do not peck in the snow. They need to stay in the coop during wintertime so they can eat and stay warm and dry.

Aside from their beautiful plumage and their friendly temperament, these hens are often sought out for their egg laying capabilities. They are high producers.

The Sapphire Gem is well-known for its egg production, which is one of its most renowned features. Hens can produce eggs year-round, and they’re known to lay up to 300 eggs per year.

Sapphire Gem’s begin producing the large brown eggs between 18 and 24 weeks old, and they lay roughly four to five eggs per week.

Like many hens, their production will begin to taper off once they are two years old. After this time, they will still lay eggs but there won’t be as many.

Though they do prefer warm climates, they are extremely hardy and do well in cold weather. Their egg production will not be altered by the changes in temperature. This makes them ideal for colder regions as they will lay year round.

Chicken enthusiasts may want to add these to your brood if you have girls who don’t lay in the colder months. Provide chicken nesting boxes and places to roost.

They are considered to be one of the best egg laying chickens.

These hybrid chickens are a medium-sized breed. They aren’t usually raised as a meat chicken because of their medium size and the fact that they are superior for egg production. However, there is a decent amount of meat on them.

Once egg production stops, it makes sense to consider if you want to keep them as pets or use them for meat. It depends for your purpose for raising chickens on your homestead.

Gems are very close to the Old Andalusians. If you are looking to breed Sapphire Gems, it’s important to know, when coupling the rooster and hens, their offspring may not be a Sapphire Gem. Being a cross between heritage and hybrid chickens, they don’t breed true like other chickens.

If they hatch true and you have Sapphire Gem chicks, determining their gender is somewhat easy because they are a sex-linked chicken variety. Soon after they hatch, you can look for different coloring between the males and females.

Sapphire Gem female chicks are typically solid blue or tinged lavender. Male chicks typically will have a white spot on their heads or on their wings.

When buying chicks, like with most breeds, the males will be less expensive than the females. Unsexed chickens will be priced in the middle.

If you want protection for your flock or want to hatch fertile eggs, you can add a Sapphire Gem rooster to your flock. They aren’t as aggressive as other roosters. Keep a minimum of 8 – 10 hens per rooster to keep everyone happy.

Here are some other interesting facts about these beautiful chickens:

They Are Great Foragers

If possible, give them the opportunity for forage for their food. However, they also do well in somewhat confined spaces.

They Are Notoriously Oviparous

The Sapphire Gem hen is a laying chick. She can start producing eggs around 18 to 24 weeks old making them cost-effective to keep. There is a small gland near the hen’s eye that is sensitive to sunlight. The light is what causes the eggs to release.

They tend to go broody and have a maternal instinct.

Sapphire Gems are both heat tolerant and cold tolerant. They flourish best in warmer weather but still need good shade and plenty of water.

In addition to having a well-ventilated living space, providing fans in the coop will help cool them off too. There are many ways to keep chickens cool in the summer heat.

Some chicken farmers place blocks of ice near them so they can drink the water as it melts. You can also set out a small wading pool about 4″ deep. They can stand in it to keep cool.

Make sure your chickens have adequate shelter during bitterly cold weather as they are vulnerable to frostbite. Keeping roosters and hens warm and dry during cold winters is essential.

Their combs can freeze and fall off if you do not protect them. Putting Vaseline on the combs may provide some protection. Special coop heaters are available and may be an option.

A chicken’s comb is like an external organ that plays different roles. One of them is to regulate body temperature.

Since chickens don’t sweat, they have to cool their bodies off another way. The comb filters out some of the heat so the chicken doesn’t get too hot, and it keeps the chicken warm in the winter.

The look and feel and look of the comb can indicate a problem.

With their gorgeous blue gray plumage and high egg production, these chickens are ideal if you want chickens who enjoy foraging. They adapt well to many climates, get along well with other breeds, and have easy-going personalities. Give them the proper shelter, food and water, and they are easy to care for.

Sapphire Gems are an unofficial breed but highly sought after and they can be difficult to find for sale.

Since they are carefree, well-rounded birds, they make a wonderful addition to your backyard flock. Friendly and docile, they are good around kids and pets. Let them roam free in your yard, and you will enjoy these fun chickens while enjoying their delicious eggs. They are great layers.