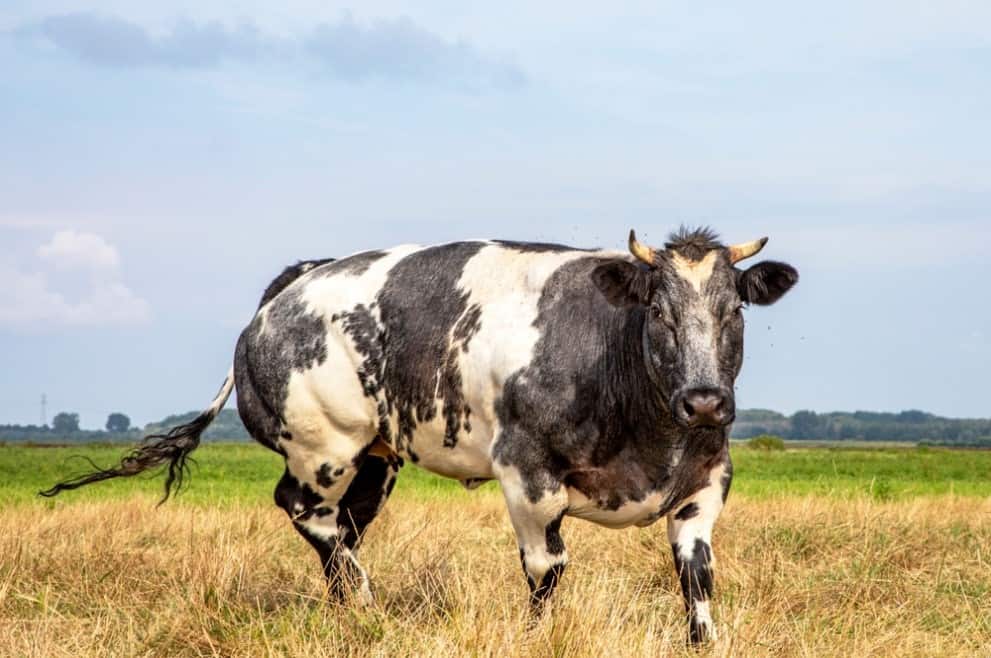 Belgian Blue cattle go by many names depending on the circle. They are also known as Belgian Blue-White, Belgian White Blue, Blue Belgian, and Blue as Race de la Moyenne et Haute Belgique.

These cows are unlike most other cattle. Originally, they were bred for their meat as well as milk. This is a massive cow that stands out wherever it goes. All you have to do is see one, and you’ll immediately know that it’s a Belgian Blue. This is mostly because they are extremely muscular. In fact, they are considered the superheroes of cows.

The one thing that sets the Belgian Blue apart from other cattle breeds is its genetic mutation that causes double-muscling, making these cows extremely buff and different-looking.

If you are looking to raise a cattle breed that is good for its milk and beef production as well as its looks, the Belgian Blue might be what you want to consider. Here are some facts and important information about the Belgian Blue cattle that might interest you.

As the name suggests, Belgian Blue cattle originate from Belgium. Selective breeding that took place over a period of 150 years gave birth to Blue Whites, or Blue Belgians, as they are often called.

Belgian Blue breeders wanted to develop a cow breed with increased muscle fibers. So they isolated the genetic trait that could lead to this in a number of cow breeds:

Even though the shorthorn cattle were imported from England and the red-pied was a local breed, within a very short period of time, the Belgian Blue was the predominant breed in Belgium as it accounted for about half of all the cows in the country.

The modern Belgian Blue beef bull was developed in the Liege province somewhere in the 1950s by Professor Hanset in an artificial insemination center. The doctor maintained the gene mutation that has become synonymous with Belgian Blue cattle.

Today, most breeds available are beef cattle bred for their prolific meat production.

As mentioned, the Belgian Blue is a cow like no other. Thanks to a genetic mutation in its myostatin gene (“myo” for muscle and “statin” for stop), Belgian Blue animals are double-muscled cattle. The Myostatin protein is responsible for muscle development, and when it’s working properly, the animal’s muscles have a growth limit.

Since it’s mutated into the Belgian Blue, these animals’ muscles keep growing at an accelerated pace, giving them their massive size and muscular look. The mutation also interferes with the animal’s body’s fat deposition, giving it extremely lean meat.

The gene mutation in Blue Belgians can be seen as early as when they are born. The calves have about twice the number of muscles they should. That is because the gene mutation maintained throughout this animal’s selective breeding changes its physiological muscle fiber growth from hypertrophy to hyperplasia mode.

While the calves are heavier than most cow breed calves at birth, they aren’t born with the kind of extreme muscles you can see in adult cows. However, they begin to develop extreme muscle mass at a very early age. When the calf is around 4 or 6 weeks old, it starts showing accelerated muscle growth.

The Belgian Blue cattle have a wide range of colors, including white, black, and blue roan. The cows also come in a wide combination of any of these colors. Some genotypes have red in them.

Thanks to veterinary science, the Belgian Blue breed of cattle is an extremely large animal with a well-rounded outline and extremely prominent muscles. These muscles are particularly visible around the shoulders, loin, back, and rump.

It has extremely fine skin, and its back is quite straight. To carry this muscle mass, the cow has very strong legs.

While it might look like an extremely built security officer, the Belgian Blue bull and cow have a rather docile temperament, making them quite easy to raise. Considering their massive size, they have a rather efficient food conversion ratio (FCR).

They can gain a great deal of weight with low feed intake, making them a wonderful option for people who want to raise beef cattle such as Limousin cattle.

How much does the Belgian Blue weigh?

As you would expect, the Belgian Blue is a rather heavy cow. The bulls typically weigh between 2,400 and 2,700 lbs. while the females weigh around 2,000 lbs.

Do Belgian Blue Cattle have any disadvantages?

While Belgian Blue cattle have many advantages, including a lot of beef and milk production, they do have some disadvantages. One of the biggest disadvantages is getting pure breed Blues.

Breeding one Belgian Blue with another leads to a rather massive calf which is problematic at birth. In many cases, the vet must perform a cesarean section as the cow will have a difficult laboring process.

Another factor to consider is the short gestation period and the rate of conception, which is very high in pure-bred Belgian cows. While this might be a good thing for farmers, the complications associated with birthing an extremely heavy calf put the cow at high risk and can also be quite expensive because cesarean sections are cheap.

What are some Belgian Blue health concerns?

As massive as they are, the Belgian Blue cattle don’t have that many health complications. There are a few concerns about the difficult birthing process. Apart from that, the other major issues are that the calves can sometimes be born with enlarged tongues, which can give them some feeding issues. Also, the massive bulk in bulls sometimes leads to stiff necks.

In conclusion, raising Belgium Blue cattle can be a profitable and enjoyable experience for any farmer. These cattle are known for their high-quality meat and milk, and they are also relatively easy to care for. With the right management, these cattle can help a farm or homestead generate a healthy profit. If you are interested in raising Belgium Blue cattle, be sure to do your research and find a reputable breeder.