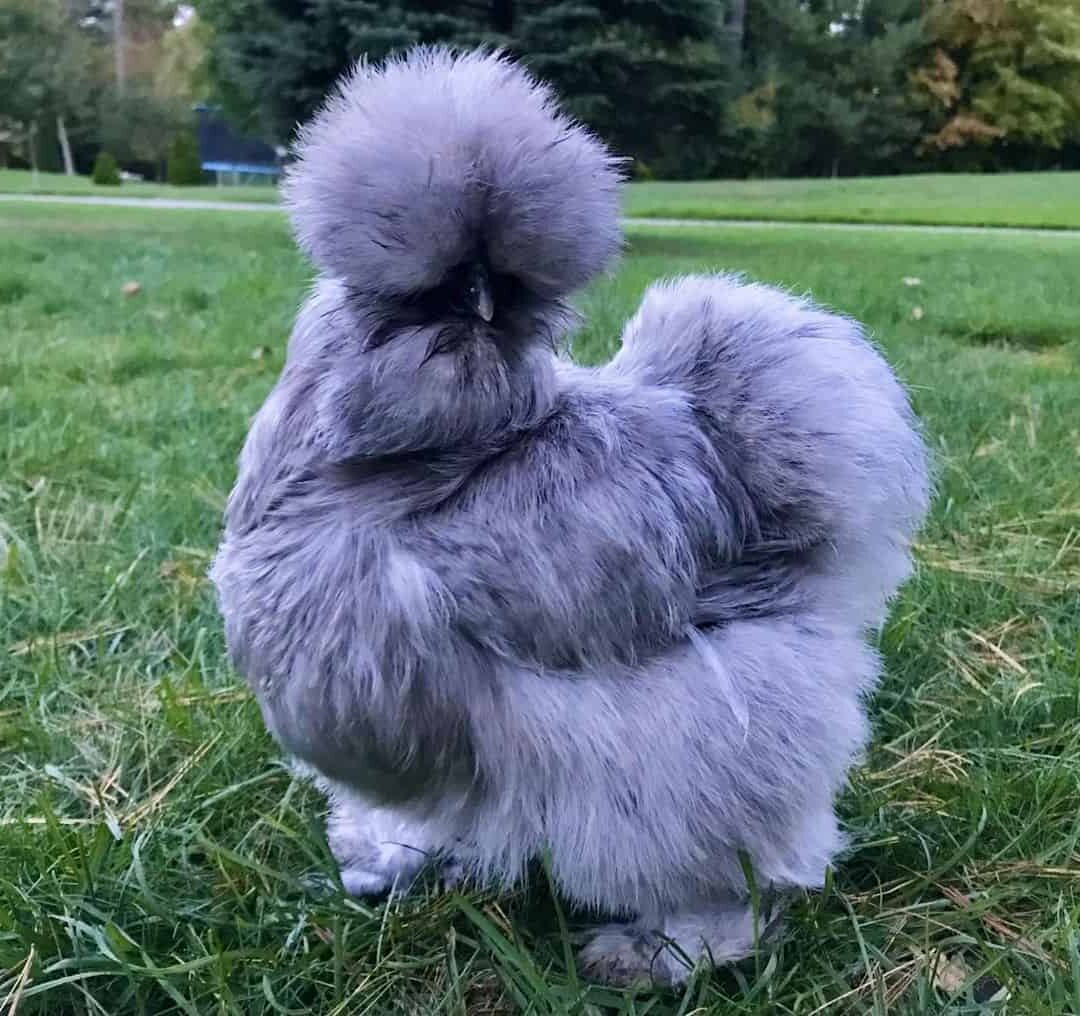 Silkie chickens, like the Blue Silkie chicken, are some of the world’s favorite pet chickens. This is mostly because they are fluffy and adorable. As one of a few chicken breeds with feathers all over their bodies, they are covered in feathers from head to toe.

If you are in the market for a chicken breed that would make a great companion for you or your kids, consider Blue Silkie chickens. They have a mild-mannered nature and are friendly. Here are some facts and interesting anecdotes about this blue furry chicken breed that might interest you.

A lot has been said about the origin and history of this breed which includes the Black Silkie chicken, White Silkies, and Blue Silkies. However, it’s now widely accepted that it originated in Asia, China, specifically around the 13th century.

It’s believed that the Silkie chicken existed in China around 1,000 years ago. One of the earliest and most notable mentions of Silkies is by Marco Polo, who described it as you would expect—a chicken breed with fur-like feathers.

The Silkie chicken was brought to Europe sometime in the 16th or 17th century and reached Britain sometime in the 19th century. At this point, it was crossbred and developed a bit more using breeds that have stronger feathers. Originally, it’s believed that the development of this breed also had some Japanese influence, especially when it comes to the soft, fur-like feathers.

Many myths have surrounded the Silkie chicken’s plumage, with one of the most audacious being that it was crossbred with rabbits at some point in its genetic development. This was when they achieved their satin-like coats. Earlier in Europe, Silkie chickens were labeled bird mammals and included in shows for people to marvel at.

Like all other Silkies, the Blue Silkie chicken isn’t a mammal. They are a unique chicken breed that lacks hook-like appendages in their feathers called barbicels. These barbicels are what hold the feathers together in most chickens. Since Silkies don’t have these barbicels, their feathers don’t grow in a nice and tidy fashion. Instead, each strand grows in its unruly style, giving Silkies a shaggy look.

You will know a Blue Silkie chicken the moment you see it. These birds, or furry chickens, have a unique appearance. Silkies have black skin, and unlike many other chicken breeds, they don’t have a crest on their heads. Instead, they have a round powder puff that makes them look like they have hair.

Like most other chicken breeds, Silkie chickens come in various colors, with black and white being the predominant options. Blue Silkies are unique in that they have a blue-ish color; some appear lavender or gray. This is extremely unusual because, according to Mendel’s Laws of Inheritance, genes occur in pairs. Each parent—a Silkie rooster and a Silkie hen—contributes to the offspring’s genetic makeup.

The color blue, however, doesn’t breed true. This means that Blue Silkie chicks can be black, blue, or splash. This blue color in Blue Silkies is a dilution of the color black.

One of the main reasons why Blue Silkie bantam chickens are so popular is because they have a rather docile character and mannerism. They are also quite charming, friendly, and very calm.

Even though they aren’t prolific layers, Blue Silkie hens can lay up to three small eggs weekly.

Just as they are mild-mannered and friendly, Blue Silkies also have great mothering instincts. The hens are quite broody so if you keep a rooster and want to incubate fertile eggs, they will happily sit on their eggs until the baby chick hatches. Blue Silkie hens are very protective of their chicks and help them as much as possible.

If you decide to raise a rooster to hatch fertile eggs or for added protection for your flock, choose a Silkie rooster or other bantam rooster. They will be smaller and safer for the small Silkies. Be sure to have a minimum of 8 – 10 females in your flock for every rooster you keep.

One of the biggest problems with this breed is that they have very dense “under fluff,” which can sometimes become entangled with the chicks and may even cause fatalities.

There are several good reasons you might want to consider keeping Blue Silkies as part of your backyard flock or backyard chickens. This is because they are:

Chicken breeds such as the Blue Silkies are an excellent place to start for chicken breeders or keepers who want something easy and unique on their farms. If you want your kids to not only learn about caring for an animal but also have a companion on the farm, Lavender Blue Silkie chickens are a good choice.

Do Blue Silkie Chickens have any health issues?

Chicken health is often key to maintaining a sizeable backyard flock. Even though Blue Silkies don’t have any more health issues than most typical chicken breeds, they do have a few problems concerning their plumage.

Since they are fluffy and have silky feathers, they are often more susceptible to parasites such as mites and lice. Therefore, it is important to regularly check your Blue Silkie chicken for these infestations and involve a vet in case of any. Also, keep them dry in the cold months to help prevent frostbite.

How hardy is the Blue Silkie chicken?

Being sweet and docile doesn’t make the Blue Silkie chicken weak. They are as hardy as most other chicken breeds. Since they have nice fluffy feathers, they can survive in cold and warm climates. The only problem is that their feathers don’t protect them against the cold as much as other chicken breeds’ feathers do. As such, it’s important to provide Blue Silkie chickens with a well-insulated chicken coop, especially during winter.

No, Blue Silkie bantams don’t require any particular diet. You just need to feed them grains, vegetation, and seeds to ensure their diet is rich and balanced.