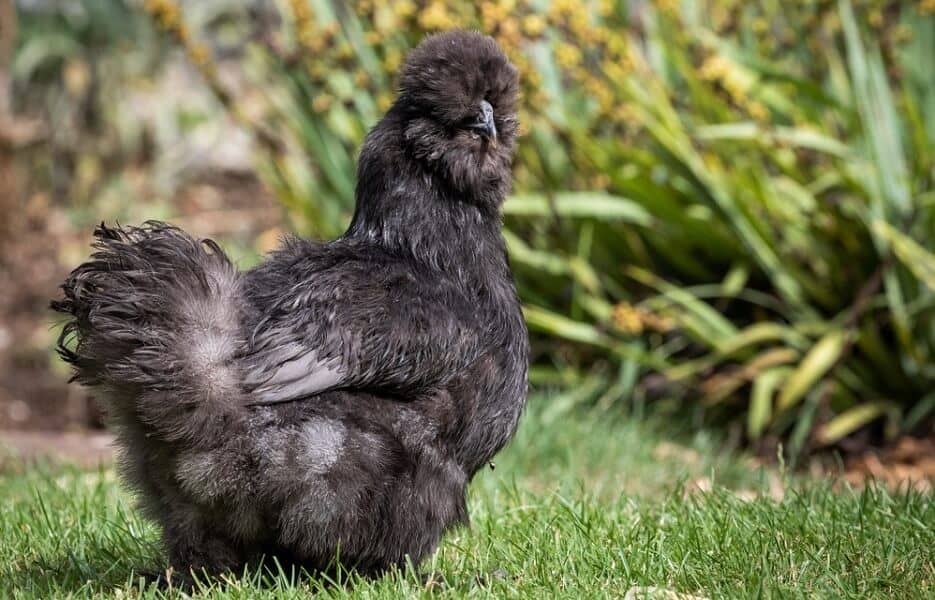 Few chicken breeds are as highly valued as the Black Silkie chicken. Lovingly referred to as Black Silkies, this breed of chicken has a gentle disposition, great maternal instincts, and unique plumage.

If you want to raise chickens but still don’t know which breed to choose, the Black Silkie chicken might be a good option. Here’s some information about this uniquely feathered chicken, including some characteristics and fun facts you might want to know.

Origin of the Black Silkie Chicken

The exact origin of the Black Silkie chicken is still not known. It is, however, believed to have originated in China, where it’s most documented. The Mandarin name for Black Silkies is “Wu Gu Ji,” which directly translates to “black-boned chicken” or “dark-boned chicken.”

The Black Silkie chicken is called the “silkie chicken” because it was a highly valued trade item way back when the Silk Road in China was the go-to-market corridor.

However, there are some rumors that the Black Silkie chicken originated in India or Indonesia. No one is sure. What we do know for sure, however, is that these chickens originated somewhere in Asia.

This is ascertained by the recordings of Marco Polo, the famous Spanish trader who traversed the Silk Road of China in the 13th century. Marco Polo lovingly referred to the Black Silkies as a “furry chicken.” One look at the common Black Silkie plumage, and it’s easy to see why he came up with that name.

As a popular and highly sought-after trade item on the Silk Road, it was only a matter of time before the Black Silkie found its way across the world and into the Americas. The American Poultry Association officially recognized this breed as early as 1874.

The Black Silkie breed of chicken has such a unique look that it’s popular with most chicken keepers and in poultry shows across the country. Apart from its unique look, this bird also has an even-keeled temperament, which makes it beloved amongst many who raise chickens as pets.

There are a few things that make a chicken breed unique. In some cases, the hen can lay strong eggs at a much more reliable rate. In others, it’s all about how much meat the chicken can give in as short a period as possible.

In others still, it’s all about their appearance. That’s one of the biggest factors that differentiates the Black Silkie chicken from the rest of the poultry class. Here are some of its unique characteristics and appearances.

As the name would suggest, the Black Silkie chicken is typically black. It has furry feathers or plumage that is lush and complete with beetle sheens on the feathers. Another thing that sets them apart from regular chickens is their black eyes, turquoise ear lobes, and slate blue beaks.

Furthermore, the Black Silkie chicken breed has feathered feet that come with five toes. There’s no doubt that this chicken is a stunner. To top it all off, they tend to have mulberry combs, wattles, and faces.

As adorable as the Black Silkie looks, one rare characteristic it has that not only endears it to its owners but also sets it completely apart from other chickens – it likes to sit on the owners’ lap like a cat or a dog. Thanks to this behavior, the Black Silkie chicken earned the nicknames “lapdog” or “fluff ball.” In addition to black and white, there is also a Blue Silkie chicken.

Yes, you read that right. It’s all black. This is mostly thanks to a rather rare genetic mutation known as fibromelanosis that gives it hyperpigmentation.

Even though this genetic mutation is rare and does make the Black Silkie chicken look weird in some ways, it’s not entirely unheard of in the animal world. The same genetic anomaly in poultry can be found in another chicken breed known as Ayam Cemani from Indonesia.

Regarding the hens’ egg-laying prowess, they tend to produce small eggs when compared to other chickens. On average, you can get around three very small eggs per week per hen, or around 120 a year. They aren’t the most prolific layers and certainly not one of the best egg-laying chickens to raise. However, the hens go broody and are excellent mothers.

Like many chicken breeds, Black Silkies start laying eggs when the days get longer. This falls in late December and very early January.

Black Silkie chickens don’t have barbicels in their feathers, making them feel like fur. Their feathers are unique, fluffy, and quite soft to the touch. This is another reason this chicken is referred to as a fluff ball in many circles.

The difference here is that, unlike most chickens that can jump and coast in the air for a few feet to escape predators or perceived threats, the Black Silkie can’t do any of that. This makes it quite prone to predator attacks.

What Size Is the Black Silkie Chicken?

The Black Silkie is considered a bantam chicken. This is mostly because they have an averagely small body size and weight.

However, in some places, such as the UK, there are larger Black Silkie fowl. However, by British poultry standards, for a chicken to be considered a large fowl, the females need to weigh at least 48oz or 3lb, and the males need to weigh about 64oz or 4lb.

It’s safe to say that the silkie chicken is a proud member of the British and American silkie bantam clubs by all standards.

Another characteristic that makes the Black Silkie chicken a favorite is that the hens are quite broody. This makes them excellent mothers. Black Silkie hens have been known to share parenting duties to raise more than 20 chicks at any given time.

These birds are so broody that they even tend to raise the offspring of other birds, such as ducks and turkeys. They can even help hatch pheasant eggs.

The Black Silkie hen can become broody several times in a single season. While this characteristic makes them excellent mothers, it does mean that these chickens aren’t the most prolific of egg layers. Another broody chicken is the Dominique chicken.

The Black Silkie chicken, the Chinese Silkie, or fluff ball, if you like, is a wonderful chicken breed for people keen on raising them as pets. Even though they aren’t that good at laying eggs, the Silkie hens are wonderful mothers that can help raise the offspring of other birds with their chicks.

They are cute, small in size, quite adorable, and just a joy to hold. The black meat and skin are different, but there’s hardly a chance you will want to eat these adorable little creatures.

Do Black Silkie chickens have any medical conditions?

While they are generally healthy birds, the Black Silkie chicken tends to catch Marek’s disease quite easily.

Is the Black Silkie chicken susceptible to any vermin?

The Black Silkie chicken is susceptible to vermin such as mites and lice. This is mostly thanks to their fluffy feathers.

Since the Black Silkie tends to have black feathers and meat, it’s easy to assume that it might very well lay black eggs. Contrary to this belief, the Black Silkie chicken lays white eggs like most other chicken breeds.

How long does a Black Silkie chicken live?

The typical lifespan of the Black Silkie chicken is around 7 – 9 years. However, to reach this age, this Black Silkies need a great deal of tender loving care from the owner. Several factors how long do chickens live. Minimizing stress among the flock, protecting them from predators, watching for signs of sickness, and feeding them a healthy diet are important factors. Learn more about the Silkie chicken as well as facts about raising chickens in your backyard.