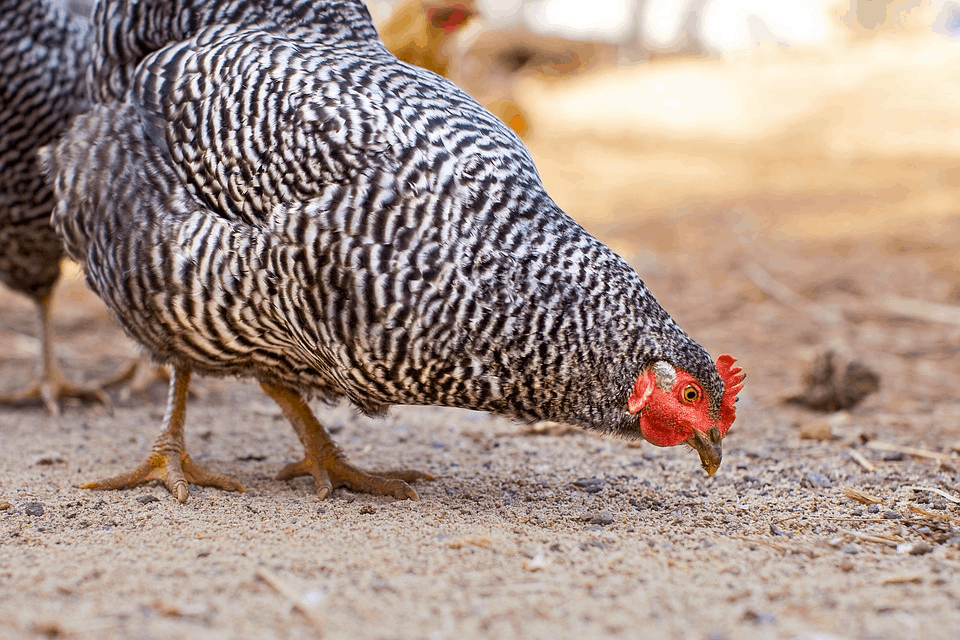 The Dominique chicken is said to be one of the oldest chicken breeds in America. They are excellent dual-purpose chickens, used for their brown eggs and also as a source of hearty meat.

Dominiques are also known for their thick, soft feathers, as they were used for pillow stuffing in the past. These calm, friendly birds are also used as show birds and kept as pets around the farm. Here’s what to know about them so you can decide whether to add them to your flock.

Today’s standard according to the APA says that the Dominique chickens should have a rose comb. If it has a single comb, it’s considered as a Barred Rock.

The Dominique chicken has a solid grey or light black-and-white striped color pattern. It’s similar to the Barred Plymouth Rock. The comb, wattle, and earlobe are red and their eyes are reddish-beige, medium-large and clear.

Its wings should be long, wide, and well folded, and its legs without feathers and stubs.

History and Origins of the Dominique Chicken

It’s estimated that the Dominique chicken was brought from Southern England to the United States during colonial times. These chickens were first documented as present in Boston, Massachusetts. They are considered America’s first heritage breed.

The original story says they came from the French colony of Saint Dominique, hence the name Dominique. They’re also known as the Dominicker or Pilgrim Fowl.

Throughout history, they had some ups and downs regarding their popularity. They even came close to extinction around the 1870s, after the Plymouth Rock, or Barred Rock, chickens came on the scene as a result of breeding.

From then, until the 1950s, the Dominique was rare. In the 1970s there were just four breeding flocks, or less than around 500 chickens in total, remaining in America.

Fortunately, overtime, breeders took a renewed interest in these birds and they became popular poultry again. This brought them off the “nearly extinct” list, where they’re now listed under “watch” instead.

The Dominique chicken has a black and white barred feather pattern. They look almost the same as the Plymouth Rock chicken, so people often confuse these two breeds with each other. Minor but visible differences between them include the comb, color, and plumage.

The first and most obvious difference is the comb. They have a rose comb with a spike and the Plymouth Rock has a single, straight comb.

Dominiques are yellow skinned chickens, while the Plymouth has a barred color pattern. The plumage of the Dominiques is heavier, which makes them a hardier bird.

Grown Dominique roosters weigh around 7 pounds and hens around 5 pounds. They’re a well-rounded bird, of medium length and are moderately broad.

Differences Between the Dominique Rooster and Hen

The Dominique roosters have a spur, are lighter in color than the hens. In addition, cocks have a bigger comb and wattle. Their wingspan is larger and their tail and wing feathers are more pointed. The hackles and sickle feather are long and well curved on the roosters.

The hens are darker in color, smaller and more rounded with plump full breasts and a high tail.

Dominique chickens are very hardy and are known for this characteristic, even in cold weather conditions. Their heavy plumage combined means they can thrive well in a colder climate. Their rose comb is frostbite resistant. In addition, they do well in humid and hot climates.

Provide them with decent shelter to protect them from weather. Like when raising other breeds, keep them dry in the colder months to prevent frostbite. Consider chickens watering systems to keep them dry.

Dominique chickens are dual-purpose birds, where they’re valued for their meat. They also function as reliable egg layers.

These birds produce medium-sized brown eggs and lay around four each week, which totals to around 230 to 275 eggs per year.

They’re cold hardy chickens, which means they do lay eggs during the winter, as well, but the egg production will slow down a bit because of low temperatures.

They tend to be broody and are known as good, caring mothers who are rather attentive to their chicks. Like Black Silkies, they are known for their broodiness. Therefore, it’s best to collect eggs every day.

Because of their calm behavior, Dominiques are friendly with children and other types of family pets and farm animals. It is considered to be lap chicken because of it is a good natured bird.

The Dominique chicks, in particular, are quite sweet and will run to your feet whenever they see you. They can, however, be aggressive when threatened, but they’ll always remain docile when they feel safe and comfortable.

Overall, they are decent foragers. They are an excellent choice if you are looking for a low maintenance breed.

The roosters are known to be aggressive around the mating season and may fight with other hens or roosters, but in general, they’re non-aggressive with their keepers.

They’re quiet which makes them perfect for both suburban and rural areas. So, if you keep your Dominique flock happy and healthy, they won’t make too much noise.

One of the best things about Dominique chickens is that they’re a suitable bird for both newbie and advanced bird keepers.

They’re a low maintenance, calm, non-aggressive, self-sufficient breed. These chickens like to survey the fields and ground for bugs or plants and worms. They go well together with other breeds that have similar temperaments.

As long as you keep their food and water clean and available and give them space to roam around they’re very easy to take care of. This makes them perfect for beginner chicken enthusiasts.

Sexing of chicks is fairly reliable. In Dominique chicks, you need to check the shape of the light-colored spot on top of their head. They’re hatched with white spots on their heads, the females have smaller and more concentrated spots and the males have larger, scattered markings.

As with most chicks, you have to keep them in the brooder until they’re about six weeks old and start to develop their juvenile feathers.

They need a heat source until that age as well. This means if mama hen isn’t around, you’ll require a heating lamp or two. After five or six weeks, they’ll start to exit the brooder on their own, once they’re good and ready.

You’ll need to change their bedding around two to three times per week, possibly even daily depending on how many chicks you have. As they grow, the bedding change and cleaning routine will also become more frequent.

Dominiques are fast growers and mature quickly. Pullets, or the young hens, usually start to lay eggs when they’re around six months old.

Feeding a Dominique chicken is much easier and less expensive compared to some of the other popular breeds.

This is because most of the time they enjoy foraging for the food themselves. Their preferences include things like seeds and insects. Another advantage here is that their love for bugs may cut down on larger garden pests, which can be a nuisance.

But also, this may help reduce feeding costs overall. You can still feed them regular chicken food, broad-leaf weeds of all kinds, seeds or growing grasses like clover or buckwheat.

Dominques are generally a well-balanced poultry breed with few health issues. They have a lifespan of around seven to eight years.

However, keep in mind that as with any other bird, taking care of potential parasites, lice or pests is a must.

To keep them parasite free, you should always ensure they have a clean coop. You’ll also need to avoid overcrowding the coop for this reason. Keep their water as clean as possible and sanitize it regularly.

Keep an eye on your chickens if they have a sudden appetite or weight loss. Or if the hens stop laying eggs or are showing poor feather quality. This also goes for a loss of feathers. These are signs that your flock could be facing a battle with parasites.

Dominique chickens are free-range birds, so they love to roam around and have a lot of space. You’ll sometimes find them foraging from dusk till dawn.

Situate their coop with an enclosed run that has plenty of space for running around. Learn how much space do chickens need. A general rule of thumb is that your coop’s interior should have around 3 square feet of space per chicken.

Do remember that you’ll need to keep them warm, so a heat lamp would be a good idea. Make sure you keep the lamp in one spot, so they can move away from it if they feel overheated.

Dominiques are the oldest known breed of chicken in America. They’re a stylish, beautiful bird that’s easy to care for and with no known health problems. Their appearance resembles that of a  Plymouth Rock chicken.

They are useful, given their robust egg laying ability and quality meat. They’re friendly, calm and suitable for both warm and cold climates.

As long as you give them enough room to roam around, and keep their water and other necessities clean, the Dominique will be happy. Consider adding them to your backyard flock.

Best Chicken Breeds for Your Backyard

Facts about Raising Chickens in Your Backyard