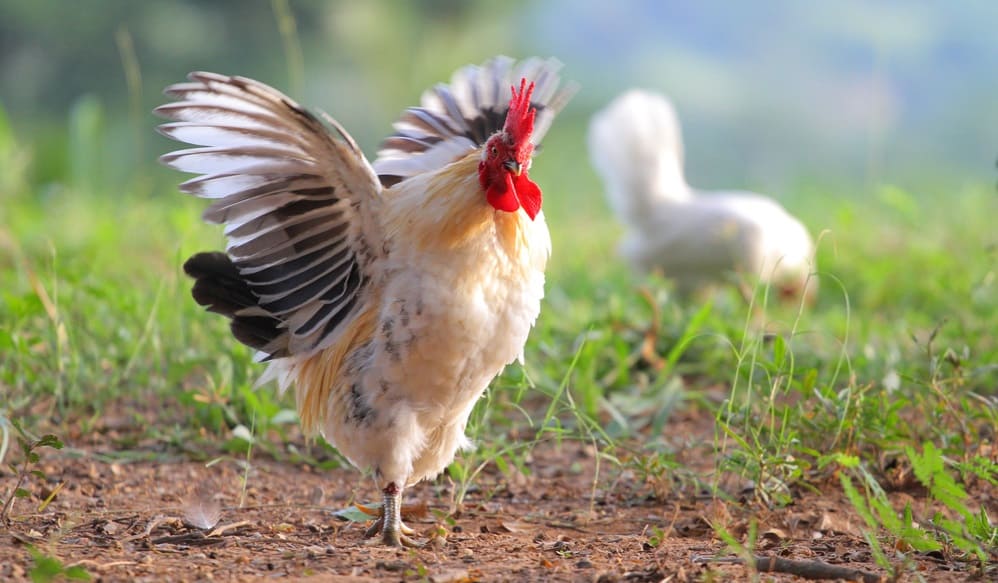 Why can’t chickens fly? It’s no big surprise that chickens can’t fly very far. If they could, we’d have to keep them in cages like pigeons and train them to find their way back home when they took flight.

As is, even a low fence without a roof is enough to keep chickens enclosed and from flying off into the wild. The fences we build protect them from predators in the outside world more than they protect them from the inside.

Chickens can fly but you’ll usually see them flying low in response to getting away from an aggressive chicken or from a perceived threat. Chickens are unable to fly more than a few yards nor do they fly high. However, while chickens aren’t flightless, it is a viable question to wonder why can’t chickens fly despite having wings, feathers, and being called birds?

On this planet, several flightless birds should seemingly be able to fly but don’t. The largest known flightless bird is the ostrich. It’s easy to see why that bird is flightless. The massive size would require an incredible amount of wing power and span to keep it airborne.

Yet, birds like the harpy eagle and the bald eagle fly just fine over extremely long distances despite being very large birds.

There’s also a collection of birds known as “game birds” that can’t exactly fly but can take off and stay airborne over short distances, like chickens can. These birds include:

Without human intervention, chickens would make up that list of flightless game birds, but we domesticated them and made it even harder for them to fly.

According to Washington University in St Louis, chickens were domesticated about 6,000 to 8,000 years ago. Their closest wild relative is the jungle fowl, or Gallus gallus, found in Southeast Asia, Northern India, and Southern China. Our domesticated modern-day chickens, Gallus gallus domesticus, come from these majestic creatures.

Like most game birds, jungle fowl is capable of flying over short distances, which happens to be much more than a chicken can do. The jungle fowl, like most game birds, have powerful flight muscles that they use when taking off in a near-vertical leap and can fly rapidly over a short distance. This kind of flight is called a burst flight, and they use it to escape predators in the wild.

Despite being able to jump up, take off, and fly over a short distance, the modern backyard chicken and even chickens living in the wild can’t achieve these burst flights with as much efficiency and intensity as the jungle fowl. Not that chickens aren’t innately capable of flying; we’ve just bred it out of them.

Why Did Chickens Become Flightless?

Man was responsible for breeding flight out of chickens. One of the main reasons chickens can’t fly today is because of breeding for egg and meat production, and we simply bred it out of them. Since domesticating chickens, we realized that we loved eating their white meat. As with almost everything engineered by man, we wanted more and bigger chickens. As a result, we crossbred chickens and created the current species with bigger flight muscles.

The chicken’s flight muscles are what we call chicken breasts. As counterintuitive as it might sound, bigger flight muscles don’t necessarily mean better flight. At least not when paired with smaller wings, as is the case in chicken.

For birds to fly over long distances, they need to have appropriate wing loading. This is the ratio between the bird’s body mass and wing area. For proper flight, a bird must have at least one square inch of wing for every 0.6 ounces of its body mass, which translates to about one square centimeter for every 2.5 grams of body mass.

You see now why the ostrich can’t even take off!

The fact that we crossbred chickens through selective breeding to have bigger flight muscles (chicken breasts) compared to their smaller wings means that the domesticated bird has a harder time taking off and staying in flight than its wild cousin, the red jungle fowl. This also explains why, in some cases, you can see smaller chickens taking flight and staying up there longer than adult chickens. The smaller chicks aren’t quite as heavy yet.

How High Can Modern Chickens Fly?

When you consider why chickens can’t fly it may be considered odd. If selective breeding can give us heavier chickens, it can surely give us lighter chickens that can fly better than their heavier counterparts. Some of the most common backyard chickens are designed for egg production instead of meat. That makes their bodies leaner and closer to the red jungle fowl.

Certain breeds of chicken have much better flying capabilities than others. Some of the better flyers include:

A bantam chicken is the exception when it comes to non-flying chickens. Bantams, which are much smaller than regular chickens, are also known to be very good flyers. On average, however, chickens can only fly to a vertical height of about 10 feet, depending on how heavy they are and how startled they are by a perceived predator.

How Far Can a Chicken Fly?

Given their relatively small wings and larger bodies, chickens are terrible flyers. Some of the most prolific flyers in the chicken family are the bantam breeds, which happen to be smaller. This type of chicken can fly for about 50 feet before needing to land and catch its breath. They are not doing cross-country flights like geese or ducks any time soon.

For a hen to fly for about 50 feet, it needs to have achieved a vertical jump of about 10 feet. Some modern chicken breeds are so heavy that they can’t even achieve that short height.

Breeds like Orpingtons or Wyandottes can’t even achieve more than a foot when they try to perform the vertical flight. Some breeds, such as Silkies, forego the entire exercise altogether.

Roosters are genetically stronger and fitter than hens. As such, they can fly marginally better than hens. However, this doesn’t mean they can perform cross-country flights like geese or ducks. It just means they can achieve a slightly more impressive vertical leap and stay in the air for a bit longer than hens.

There are two main reasons for this:

Why Do Chickens Have Wings if They Can’t Fly

It can be argued that, even despite selective breeding, left in the wild and to their own devices, domestic chickens might have evolved enough to fly at least nearly as well as their jungle fowl relatives.

However, because backyard birds hardly ever have to fight for their lives in terms of predators (humans protect them), they never really develop the need to fly. Breeds bred for rapid growth and meat can hardly get off the ground.

As a chicken owner, it’s important to know that even though chickens can’t fly, you still need to build the chicken coop, so they remain within its confines and are protected from weather and predators.

As mentioned earlier, some chicken breeds are slightly lighter and better flyers than others. If the chicken coop fence isn’t high enough, these breeds can escape during their chicken run.

When considering how much space do chickens need, consider that while you may need perches and roosting bars — which some chickens use, depending on the breed you are raising– you won’t need their space to be too high. It helps for cleaning if you can walk into the area or at least be able to access it to clean.

Thanks to thousands of years of selective breeding, the modern chicken is a breed that is designed to have bigger flight muscles (chicken breasts) for our eating pleasure. These bigger flight muscles have made it difficult for the modern chicken to take off and stay in flight over long distances. They simply do not have the proper wing load. This is how we bred them and how they evolved over time.

So while it is possible for a chicken to fly, they don’t fly like ducks and other birds do. Chickens and roosters can’t fly very far and can’t fly high.