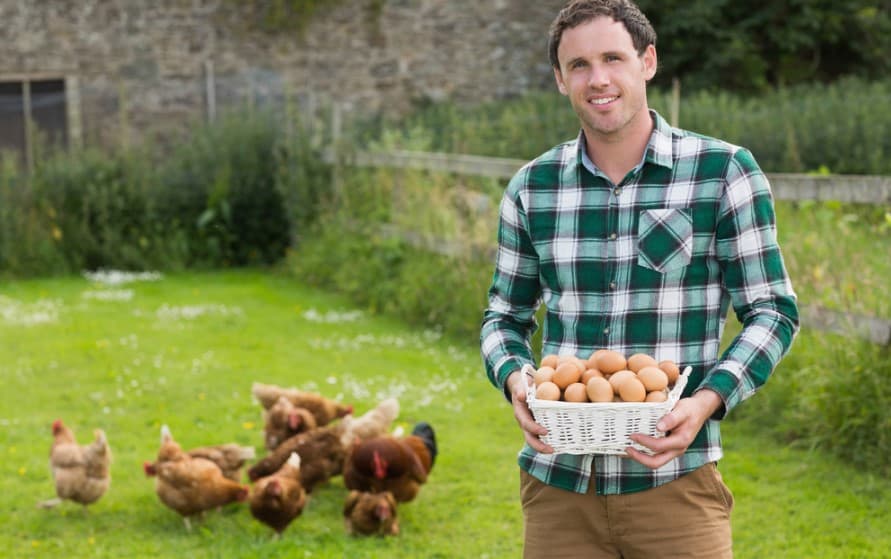 One of the main reasons breeders worldwide endeavor to come up with these hybrids is because they are looking to maximize certain qualities found in the parent stock and pass those on to the resulting offspring, which is exactly what has been achieved with the California Tan chicken.

Not only does the California Tan chicken get its gorgeous white color from the White Leghorn in the breed, but it also, more importantly, gets its egg-laying capabilities from Production Reds.

If you are a chicken farmer looking to keep excellent egg layers for commercial purposes, the California Tan chicken might be one of the best options. Here are a few facts about this lovely chicken and why you might want to consider raising them as part of your backyard flock.

The California Tan Chicken breed came about thanks to years of research into egg production. The White Leghorn and the Production Red are prolific egg layers, and crossing them to come up with an even better egg layer makes sense.

California Tans enjoys staying in groups and observes the pecking order. They are very friendly and active chickens. California Tan roosters are protective of their flock and will work hard for them. However, they aren’t overly aggressive or domineering. Overall, these chickens are easy to handle and care for in backyard farms.

Like the California White chicken breed, the California Tan chicken has white feathers but some distinctive features. The most common physical attribute is that it often has a brownish texture on some parts of its body. These chickens tend to have a wide range of color variations in its overall white plumage.

In some cases, you will find a California Tan hen or rooster with black flecks or even a reddish tint on its plumage. There isn’t much difference between roosters and hens regarding plumage. These birds have a single-type comb. The comb and wattle of the California Tan chicken tend to be pinkish-red.

California Tan chicken is a layer hybrid. These strains have been selectively bred for the improvement of such things as egg numbers. Commercial production operations typically use hybrid chickens for their output of eggs or meat.

While there isn’t much difference in the plumage color or feather texture between the hens and the roosters, there are some distinctive differences in body structure. 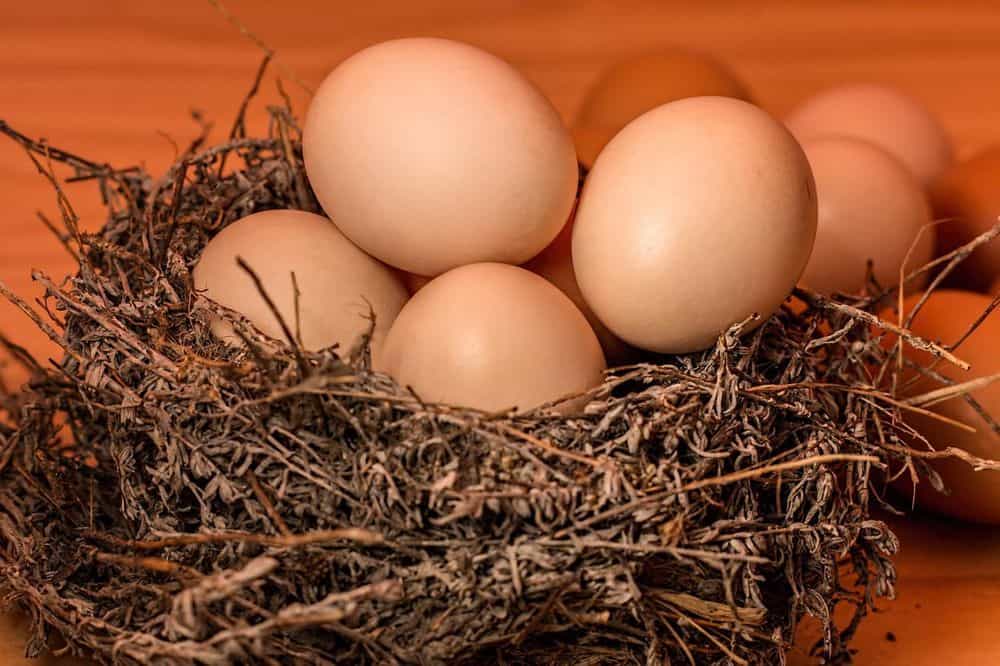 This is the main reason this breed was developed—its extremely high egg production rate. The White Leghorn hen or White Leghorn chicken and the Production Red chicken (similar to Rhode Island Reds but a lighter color) from which this breed comes are known for their prolific egg production capabilities. As a result, the offspring inherited this incredible ability at an enhanced level.

The California Tan Chicken is often confused with the California White Chicken. It produces large white eggs and is a cross between a Gray California and a White Leghorn. That confusion is attributed to the White Leghorn half of the chicken’s parentage.

However, since the California Tan has the Production Red as the other half of the breed, these birds tend to produce tan eggs instead of the white eggs produced by the California White chicken.

Capable of laying up to 300 eggs per year, the California Tan chicken produces large-sized eggs that are often brownish or slightly tinted, making them look like tan eggs.

Not only is this breed of chicken quite hardy, but it also has an active reproduction system, which means that there are hardly any seasonal egg production drops. With proper care, California Tan chickens can give you eggs throughout the year and maybe even do more than 300 per year.

Like their close relative, the California White chicken, California Tan hens start laying eggs relatively early, at around 17 weeks. The eggs start smallish but become large as the bird matures.

The only way to get this chicken breed is to cross a Production Red with a White Leghorn; otherwise, you will get a completely different breed of chicken.

Personality and Temperament of the California Tan Chicken

The temperament and personality of a chicken often follow that of its parents. Since the California Tan chicken is part White Leghorn, this breed has inherited the docile and friendly nature synonymous with the White Leghorns.

This playful breed of chicken gets along well with other chicken breeds. The hens are quite cuddly and don’t mind being picked up, which makes them ideal for people who have children and want to teach them or familiarize them with backyard chickens. As is to be expected, the roosters can get somewhat aggressive regarding mating rights, but they are also generally quite calm.

The California Tan chicken is cold and hardy, meaning that it can tolerate low temperatures. However, they thrive in warm temperatures, which is why they get quite playful during summer.

You might consider raising California Tan chickens as part of your backyard flock for several reasons. These include:

This is the number one reason this breed exists. California Tan hens are prolific egg layers as it inherited this trait from both sides of its parentage.

Producing up to 300 eggs a year, this breed can give you large brown eggs all year round. If you are looking to go into commercial egg production, having California Tan hens in your flock is a wonderful idea.

Even though they are friendly and docile, these chickens are quite hardy and capable of fending for themselves. They like a farm setup where they can roam freely and forage for their own food.

Even though it’s necessary to supplement their diet to maximize their egg production capabilities, they can do well if left to their own devices.

This isn’t the primary reason these chickens are raised, but that doesn’t mean they don’t have a considerable amount of meat on them. The California Tan rooster can weigh six pounds, while the hen can weigh up to four pounds. This means they can be used for meat production once their egg-laying days are behind them.

The California Tan chicken is quite easy to care for as it needs enough space to roam and forage for food, a secure chicken coop where they can lay their eggs and enough supplements to maximize egg production. This might be a good option if you have been looking for a reliable egg-laying breed.

If you want to hatch fertile chicks, you will also want to raise a rooster with your hens. It’s best to have a minimum of 8 – 10 hens per rooster. Consider if raising a rooster is right for your situation with these pros and cons.

Do California Tan chickens have any health concerns?

The unfortunate truth about prolific egg layers is that they often tend to have many issues related to their egg production systems or tracts, affecting their egg production prowess and, in extreme cases, their life. However, many of these issues can be solved by ensuring that the hens have no vitamin deficiencies, infections, or parasites that will interfere with their overall health.

At what age do California Tan hens start laying eggs?

This hybrid breed can live between 5 – 8 years. Much of a chicken’s lifespan depends on several factors, including the threat from predators and day-to-day care. With the right kind of care and protection from known predators, California Tan chickens can live up to eight years.