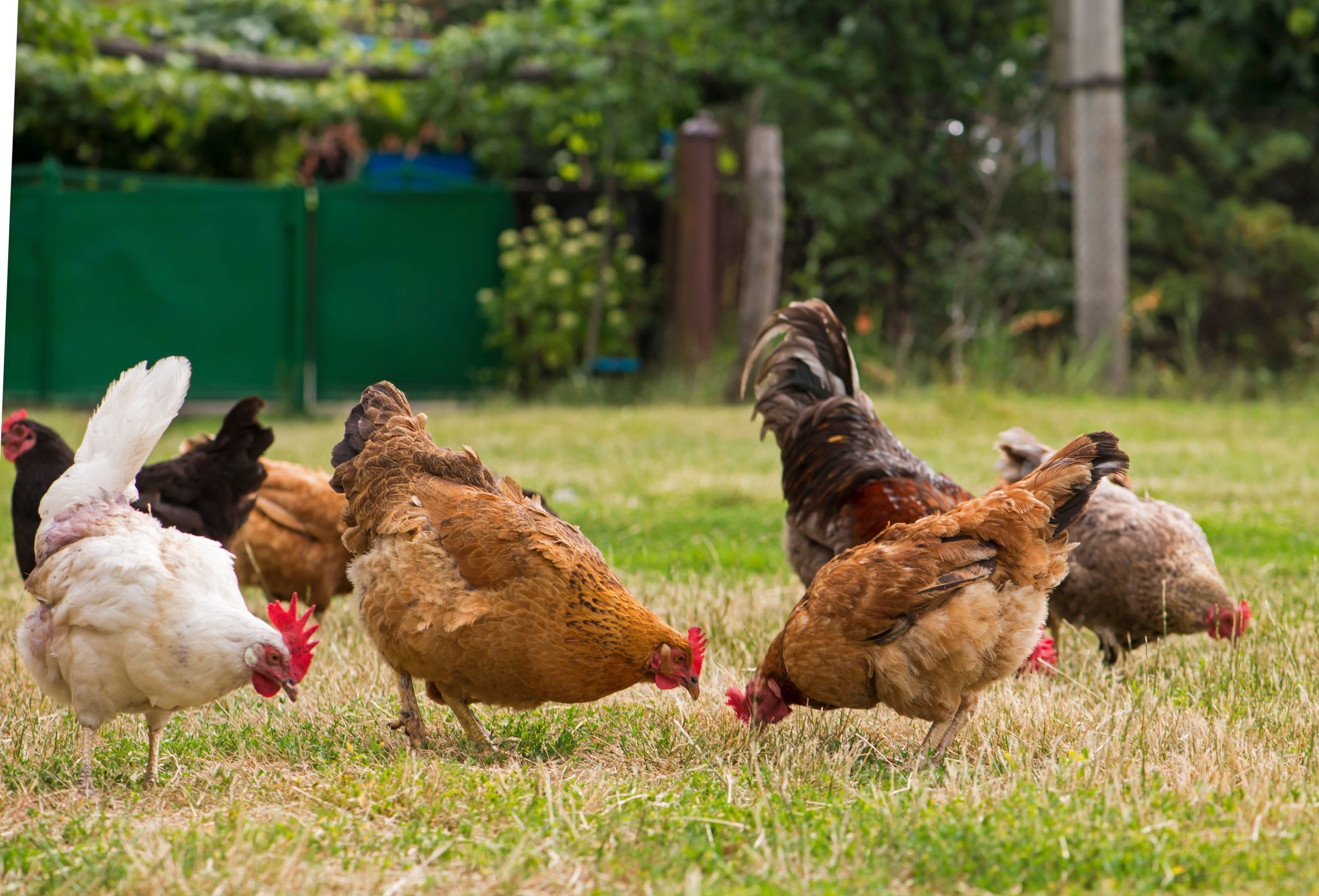 If you have a bit of excess garden produce, tomatoes going bad from the grocery store, or some scraps from your kitchen, you may have an idea. You may look at your kitchen scraps and wonder, Can Chickens Eat Tomatoes?

When you first start raising chickens, you may be a bit nervous. You know that the layer pellets and chicken scratch that you buy at the store is safe for your feathered friends. After you have had them for a while, you may want to start giving them treats. The great news is chickens can safely eat all kinds of things. However, it’s important to keep chickens safe and healthy.

Chickens eat a wide variety of foods. They are omnivores, eating insects, meat, and all sorts of plant foods. There are very few fruits and veggies that chickens don’t need to eat. So, yes, indeed, chickens can eat tomatoes. Make sure they are ripe. Also, remove the stems before giving tomatoes to chickens.

In addition, chickens can eat cooked tomatoes. It doesn’t matter what form the tomatoes are in. If you have leftover spaghetti sauce that no one will eat, feed it to your chickens. If there is some salsa that nobody likes, the chickens will be glad to help out. Perhaps you have cooked some tomatoes, and you are tired of eating tomatoes.

The good news is there is no need to throw them in the trash or the compost tumbler. You can even feed tinned tomatoes to your chickens.

You do not have to cook tomatoes to feed them to your chickens. They love tomatoes raw just as much as they love them cooked.

Cherry tomatoes are so prolific in the garden that you can get fed up with them. If you have an abundance of cherry tomatoes, and you are tired of eating them, you can feed them to your chickens.

Raw tomatoes are favorites of chickens, as long as they are ripe. Just be sure to remove the stems first. If you’re not sure how to safely feed chickens to your tomatoes, we can help you.

A chicken’s powerful beak can peck a raw tomato to pieces in just a few minutes. In fact, they are such big fans of tomatoes, that, unless you fence your garden, you may not get any tomatoes. Chickens love to browse in the garden, scratching at the ground and eating insects.

If you have large tomatoes like Cherokee Purple, Brandywine, or Bradley tomatoes, just cut the tomatoes into pieces and scatter them on the ground. The chickens will do the rest. Make sure that there are plenty of pieces to go around. Just like with everything, this will keep the most aggressive, bossiest chickens from getting all the tomatoes and the smaller, less assertive hens from getting nothing.

If you have some smaller cherry tomatoes or Roma tomatoes, be sure that you have more than enough to go around. Food competition will lead to the milder mannered hens being bullied by the more aggressive hens.

Green tomatoes have a chemical called solanine in them. Solanine can make both humans and chickens ill. When humans eat green tomatoes, they generally fry them. Cooking vegetables that have solanine in them breaks down the harmful chemical. As the tomatoes ripen, the levels of solanine decrease to safe levels.

You do not have to worry excessively if your chickens get into the garden and peck at a few green tomatoes. A couple of bites will not bother them or make them sick. The solanine makes the tomatoes taste bitter, so most of the time, the chickens will take a mouthful and move on to more tasty fare.

If you had a lot of rain, and you have moldy tomatoes, you might be tempted to try to mitigate the waste. You might want to toss them to the hens. You should never do this.

Moldy food of any kind is not good for chickens. Some molds can produce poisons when consumed by chickens. While it might not always make them ill, you don’t want to take a chance.

While chickens love ripe tomatoes, including the seeds, if you turn your hens loose in the garden you may be surprised that they will leave the whole plants alone. While chickens will peck plants like lettuces and herbs down to the ground, they do not eat tomato plants.

Since tomato plants are nightshades, their leaves, stems and roots contain low levels of solanine, which can be slightly toxic. However, this solanine also makes the plants taste bitter, so the chickens are unlikely to eat very much of the plants. They may take a taste of the tomato leaf and then avoid the plant from then on.

Benefits of Tomatoes for Chickens

Tomatoes are very good for chickens. Roosters will enjoy them too. These delicious red fruits are loaded with antioxidants, vitamins, minerals, and fiber. Whether you feed chickens cherry tomatoes or other slicing varieties, they will benefit from the nutrition in the tomatoes.

This means that the nutrients in the tomatoes will go into the eggs. Your egg harvest will be more nutritious because you fed your chickens tomatoes.

In my garden, birds start eating tomatoes just as they start ripening. However, they don’t eat the entire tomato; unfortunately, they just eat a bit from several. Another problem is insects getting at my garden tomatoes. When the birds and insects feast on my tomatoes before I pick them, this  leaves me with dozens of tomatoes that I don’t want to eat but I don’t want to just toss in my compost.

What I’ve started doing is picking these partially-eaten tomatoes to save for my chickens. However, because most of the time they are still green or ripening, I learned how to ripen green tomatoes.

While I’m picking partially-eaten tomatoes for my chickens so they don’t go to waste, I’ll also harvest what-appear-to-be fully-grown tomatoes when they are still green. I put them in a separate brown bag than the ones that have the tomatoes for chickens. I ripen them for my family before they are damaged by pests.

Problems With Feeding Tomatoes to Chickens

There are a few cautions about feeding tomatoes to chickens. When you feed tomatoes to your hens, remember that they should only be given as treats.

If your chickens eat too many tomatoes, they may neglect eating other foods that they may need in their diet. Like a small child who eats cookies before dinner, they won’t have an appetite for the balanced layer pellet that they need. Best Chicken Feed Options

While they are unlikely to get sick from eating too many tomatoes, they may stop laying eggs as well. This is not because they are ill, but because they didn’t eat enough layer pellets with egg producing nutrients to produce eggs.

Other Fruits and Veggies That Chickens Can Eat

Aside from wondering can chickens eat tomato, you may wonder about other food sources in the garden for your chickens. Here is a brief list of which veggies and fruits chickens can consume. Consider them to be chicken treats instead of making up a meal. In order to lay eggs, they need a proper healthy diet.

What Nightshades Can Chickens Eat

Bell peppers – As a member of the nightshade family like tomatoes are, chickens can eat the bell pepper fruits, but not the plants because of the solanine.

Eggplant – This is another nightshade. Chickens can eat eggplant, but the stems and leaves should be removed because they are poisonous with the solanine.

Potatoes – Also considered a nightshade, potatoes are fine for chickens. However, they should not eat green potatoes since these contain solanine which is poisonous. Do not give chickens the leaves, stems or any part of the plant.

Other Fruits and Vegetables

Yes, Chickens Can Have Tomatoes

Chickens are great animals to help your family avoid food waste. They can eat most scraps from the kitchen, so there is no need to toss food waste in the trash or even the compost.

While chickens can eat a wide variety of foods, there are a few things you should avoid. Don’t feed your hens junk food or candy. It’s not good for humans, and it’s not good for hens. Don’t feed the hens citrus, avocado, green tomatoes, green potato skins, dried beans, or moldy foods. All of these things can make your chickens sick.

Chickens can eat ripe tomatoes. Red tomatoes are perfectly fine for them. Take off the stems first. Do not give them unripe tomatoes or the tomato plants or tomato leaves to eat. But you can give chickens tomatoes to eat if insects or birds have found them and started eating them.

How long can chickens go without food