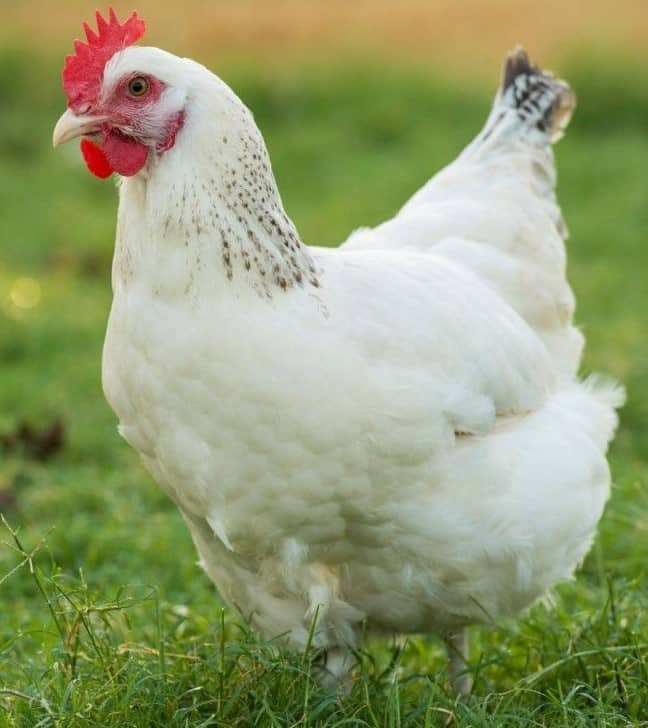 The Delaware chicken breed is one of the fastest-growing of the popular heritage chicken breeds. It’s a dual purpose chicken raised for eggs and meat production in backyards.

It is a stunning hen that lays brown eggs. Additionally, its calm demeanor and friendly temperament make it ideal for beginners.

Due to its thick feathers, it’s suitable for cooler climates.

Learn about Delaware chickens, their characteristics, usefulness, and what it takes to raise them in your backyard farm.

The Delaware breed is a medium-sized bird. It is characterized by its white feathers and black neck and tail feathers. Its plumage makes it stand out. Feather color is a mixture between either white or silver, and the tails and wings contain a few black barrings.

Other characteristics prominent to the Delaware breed are the deep red comb, wattles, and earlobes.

Their eyes range from a deep reddish bay color all the way to a golden brown. Lastly, their beaks are a deep red with their skin and legs being bright yellow.

Compared to other chicken breeds like the Cornish hen, they are very similar in build and weight.

These birds have a broad and deep body, which is perfect for colder climates. In addition to being cold tolerant, they are  heat tolerant as well.

Their combs are larger than other chicken breeds. If you live in a colder climate, you can put Vaseline on the comb to protect from frostbite.

When you are considering the best chicken breeds to raise, disposition is important. Delaware chickens are calm, friendly, and intelligent.

They are very loving and curious and are some of the most friendly chickens you will find.

However, they aren’t always ideal for those looking for maximum production and profits. They are perfect for a small homestead but shouldn’t be bred for industrial use.

Although one of the chicken breed’s major behavior is being quiet, they do enjoy chatting with one another from time to time. They are generally peaceful birds and tend to be further down in the pecking order.

While they generally get along in a flock, sometimes they may be irritated with one another. That said, the Delaware breed is less assertive than other chicken breeds such as the Rhode Island Reds.

There are some whose prominent traits include being assertive toward others at times.

Many Delawares enjoy being around others and benefit from a rich environment. Their keen sense of curiosity makes them ideal for small homesteads or backyard farms.

Their favorite activities are pecking around in the dirt and observing or aiding humans around them in daily tasks. You’ll find their interaction with humans is positive, and they can even befriend their owners.

Many of them enjoy interacting with humans, which includes cuddling, petting, and resting on their laps. They are considered to be lap chickens.

Their thick-feathered body makes them ideal for colder climates, but they may also enjoy the sun if they have shade to rest in.

When it comes to Delaware chickens egg production, they are predictable layers. Hens produce up to four large brown eggs each week. They are reliable layers, even in the cold months.

If you are interesting in raising chicks or breeding them, the hens are not broody.

Investing in an incubator and learning how to hatch chickens on your own will help ensure that the eggs are properly fertilized and brooded for them to hatch.

If you’re not planning on using the eggs to produce more hens, then you can easily skip the incubator, but still, we highly recommend to keep the incubator. Doing so will provide you additional hens and a recurring flow of brown eggs, and when the time comes, meat.

Like most breeds, Delaware roosters are aggressive. However, they are not as aggressive as some other breeds. They will work tirelessly to protect their hens from harm.

They will perform courting and mating rituals. Keep a minimum of 8 hens for every Delaware rooster.

As mentioned, the Delaware breed was originally bred from a mixture of both the New Hampshire and Barred Rock chicken breeds.

With their genetic similarities, you can produce Delaware chicken with several other breeds easily. Many times we see farmers breed the Delaware breed with other sex-linked baby chicks.

The best combination of the Delaware rooster is, of course, the New Hampshire Red or the Rhode Island Red hen.

They can also be mixed by using a New Hampshire Red or Rhode Island Red rooster and mate it with a Delaware hen to get red sex-linked baby chicks.

The Delaware breed is generally a healthy chicken, but it may be susceptible to parasites.

The only other major issue breeders are aware of is that their combs are huge, which results in them being sensitive to cold weather.

While the breed itself does well in the cold, their comb can easily be damaged. To avoid this, many breeders tend to place petroleum jelly on their combs, which helps prevent frostbite and lubricate the combs and keep them warm.

Other than that, there are no known issues with the Delaware breed. Delawares aren’t more susceptible to common chicken diseases than other breeds.

You can check out the video below if you’d like to see a live Delaware chicken.

As the name may suggest, this chicken breed originated from Delaware in the United States. The breed started in the early 1940s by a man named George Ellis.

He raised this chicken breed for the sole purpose of providing single comb brown eggs. He mixed the chickens with the Rhode Island Red breed, and this resulted in a higher grade of meat and eggs.

Names for the Delaware chicken

The chicken was not originally named the “Delaware”. It was called Indian Rivers and was changed sooner to Ohio Beauty. This was due to its growing popularity in Ohio.

In the year 1952, it changed to represent its origins and was admitted into the American Poultry Association.

For production, the chicken breed has been a favorite because its plumage produced both white and black feathers. This later was found to be even more amazing because its appearance remained slightly even when plucked.

Likewise, the chicken’s rapid growth ensured that there was a steady flow of both plumage and eggs, as well as showed a great capability to provide a meat source.

With growing popularity, the Delaware breed became useful for many different activities.

The chicken’s quick production speeds and healthy appearance made it ideal for use in the competitive broiler industry. Delaware hens can lay eggs when six months old.

However, they were outclassed by other standards such as the Cornish Rock Cross nearly 20 years later.

It is the only variety of the white and black spotted chicken breeds, as well as a breed that features bearings on its hackles.

The Delaware breed is not commonly bred unless on small farms, which means there are no other standards from their breed. They are not common to raise in the poultry industry.

As such, as of 2009, the American Livestock Breeds Conservancy Company included them in the list of dying chicken breeds. It’s watch status is that it’s considered a sustainable heritage chicken breed.

Are They Right for Your Homestead?

If you’re building a backyard flock or want a small addition to your homestead, the Delaware chicken can be a good choice.

They are often recommended for small suburban homesteads that have a wide-open range since it helps promote a healthy mindset and also is good for plentiful egg production.

With the chicken’s temperament, they enjoy being around other animals, flock members, and humans.

They love to chatter amongst themselves and are very lively and social. Putting them into an isolated area can cause them great distress, so if you’re planning raising them, you must get a small flock.

Besides that, they are good around children and other humans.

However, they benefit the most from being able to roam freely around your homestead.

In rural living, you should have plenty of open space, but we recommend them only in places with fences and shelter from predators.

The Delaware chicken also loves being in a rich soil environment that provides them plenty of insects. They enjoy the chase and nutrition provided by worms, and other small critters.

Additionally, they prefer gardened areas where they have the chance to come into contact with multiple plant species.

Lastly, they are perfect for beginners or those wanting to expand their homesteads.

Delaware chickens aren’t considered to be among the best meat chickens or the best egg laying chickens. However, it’s an easy-to-raise breed that’s a useful addition to a flock.

One of the best ways to be self-sufficient in rural areas is to produce your own food, and many homesteads benefit from the addition of Delaware chicken.

If you plan on raising chickens for eggs or meat, consider this breed. They are ideal for backyards. Delaware hens don’t go broody so they aren’t ideal to breed.

In general, commercial industries don’t raise them. Similar to the Cornish cross, the Delaware breed soon became overpopulated, but fortunately, it is slowly coming back into trend due to homestead construction and backyard flocks.

Flock owners will benefit from its production. Small farms, individual families, or those looking to build a successful homestead will enjoy their egg production. They are quality meat birds as well.

Due to their genetics, they also mature quickly, which means quicker egg production and reproduction.

Their usefulness and purpose includes plumage, eggs, meat, and can even help with keeping the soil fertile.

You’ll find them to be a unique and fascinating chicken breed to add to your backyard farm. They don’t take additional effort to raise.