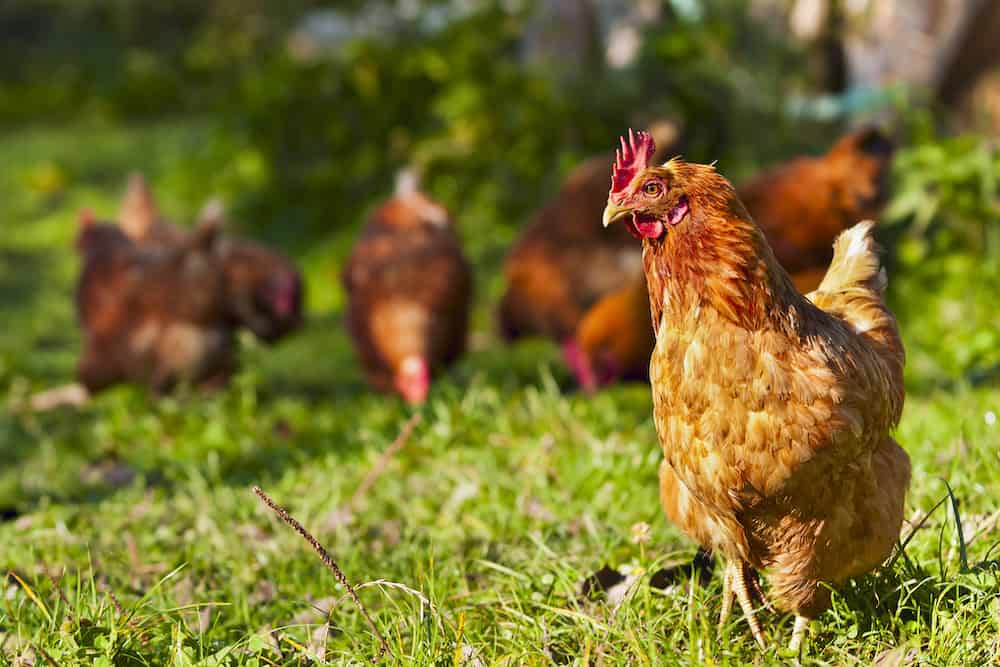 Here’s what to know when choosing the best meat chickens.

Every year, people focus on what they eat and desire to be healthier.

Many times, supermarket meat has added hormones in it, so people try to grow food for themselves.

If you didn’t grow up on a farm, you are probably going to start with vegetables and fruits.

Then, you may soon realize that you want to raise your source of meat for protein.

A popular meat source is a chicken, but what are the best meat chickens?

Divided into two categories, here are the top ten chicken breeds that you can raise to ensure you have a good source of meat:

The best source of chicken meat is usually called Broilers.

They make excellent chickens for meat because they tend to grow faster than those raised to lay eggs or chickens that can do both or the so-called dual-purpose chickens.

In about five weeks, a broiler chicken can weigh between four and five pounds.

At 10 weeks old, they can be well on their way to 10 pounds, which is a suitable size for an average family.

It can be easy to raise broilers and have a more self-sustaining lifestyle.

That said, those who are looking for the best-tasting chicken meat, here are the five breeds to consider:

All of them work well when it comes to raising them in your backyard for personal meat purposes.

These chickens can weigh about 12 pounds in just six to eight weeks, and since they grow quickly, they don’t lead active lifestyles and are considered the best chicken breed for meat.

The Cornish Cross chicken features yellow skin, which turns golden as they cook.

The male can weigh 12 pounds while the female gets to be about eight pounds, plus they tend to be white, which is ideal for those who want a traditional-looking chicken.

You’re going to like that many commercial producers also use this breed, so it’s going to be quite similar to what you bring home from the store.

You’re going to find that many people prefer it over the other options used specifically for meat.

The Bresse chicken is a white, large bird, but you can also find blue, black, and gray colors.

Generally, the male weighs seven pounds while the female weighs in at five pounds.

They do take between 16 and 20 weeks before they can be harvested.

It’s got blue feet and can be highly popular but very expensive.

Still, you shouldn’t focus solely on price and stay away from it.

Once you’ve purchased your breeding pairs, it only costs for the food to raise them; in fact, you can offset this cost by growing food for the chickens.

Likewise, the Bresse breed is famous as being the best tasting chicken breed, and its meat is quite tender.

This chicken breed is also docile and tastes delicious, but it doesn’t have a ton of meat on them.

Jersey Giant chickens originate from the USA, and the goal was to replace the turkey with this bird. Turkey Eggs

However, that never happened, and it became popular as a tasty chicken breed.

You’re going to find them in various colors, including the traditional red, black, blue, and white.

These birds are purebred and can weigh between 11 and 13 pounds, but keep in mind that these chickens do grow slower when compared to others.

Typically, the Jersey Giant takes between 16 and 21 weeks to grow to the right size for harvesting.

They also require more food and time, which can be a problem.

If you grow feed yourself, you can use it to feed these chickens.

In the commercial world, these birds are usually considered unacceptable, but in backyard coops, they are a hot commodity.

Generally, they are docile and calm, though males can be slightly aggressive.

When the female does lay eggs, they are brown and huge, which means you can use them for eggs until you are ready to consume them.

Freedom Rangers had initially been developed to be pasture-fed chickens for meat; in fact, they are bred specifically to be pesticide-free in the meat market.

Often, they flourish on a low-protein feed and can scout food better than a Cornish Cross.

As such, they can roam around large pens with ease.

If that weren’t enough, they are highly versatile in what they can eat and can cost less to keep.

As one of the best chickens for meat, they survive on corn feed and field bugs, so they are perfectly healthy to eat.

Generally, you find them in various shades of red, though they can have spots, black feathers, and bars on them.

They can also come in gray or bronze.

Keep in mind that these birds take between nine and 11 weeks before they can be used as food.

Therefore, they aren’t very big and may not feed a large family.

Still, they are easy to keep and suitable for free-range needs.

If you want a heavy chicken breed, the Orpington is an excellent choice.

They are often buff in color, but they can also be white, blue, or black.

Males can grow to be 10 pounds, while females are usually around eight pounds.

These chickens are great layers, but they tend to be used as broilers because the meat is very tender and tastes delicious.

Generally, these birds feature a curved shape along the underline, a broad body, and a short back.

They don’t often grow very big and take a lot longer to grow, which is between 18 and 24 weeks, plus they usually lay more than 200 eggs a year.

This allows you to get eggs from the chickens until it is time to slaughter them for meat.

Also, you’re going to save money by using this approach and can even breed them.

These five options should be high on the list for you.

They can naturally replenish your stock of meat chickens. 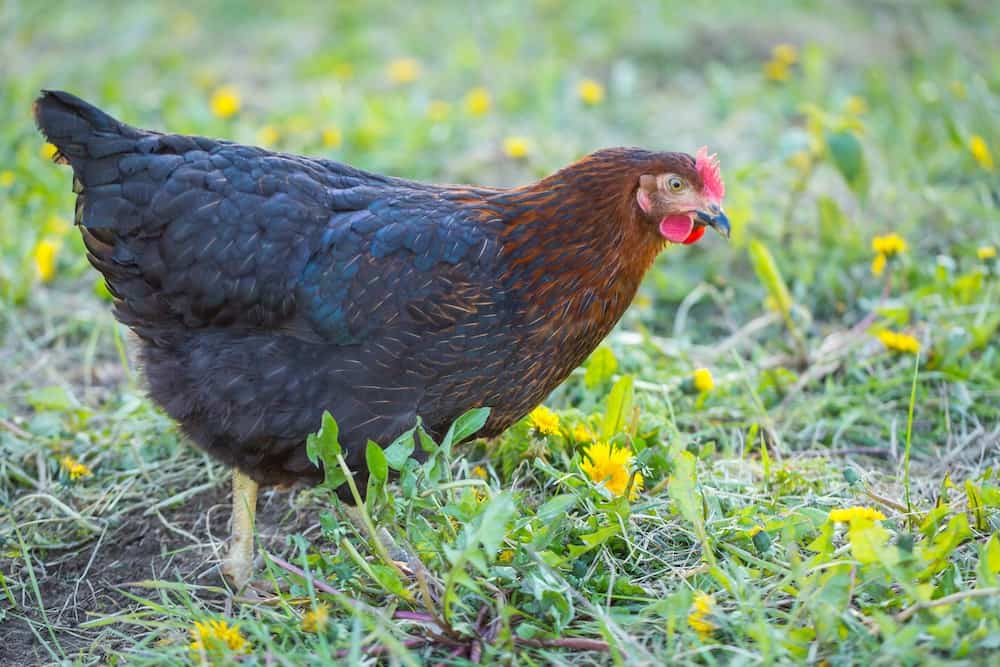 The Brown Leghorn is a variant of the White Leghorn and is an excellent egg layer, and it could lay about 280 eggs each year.

There are no real differences between the white and brown variety other than color, plus they are both going to lay white, large eggs.

The males can get grouchy, but they’re rarely aggressive by nature.

Generally, the male is about six pounds while the female is just five pounds.

These birds do take about 16 to 21 weeks to mature and be ready for harvest, but you can be getting eggs in most of that time.

The Turken Naked Neck chicken is actually a chicken that looks like a cross between a turkey and chicken; hence, the name.

The bird enjoys both cold and hot weather, so you can keep them as a backyard chicken for meat and eggs no matter where you live, plus they can adapt seamlessly to any situation.

Therefore, they aren’t going to get stressed out easily and put on weight fast.

Still, the males get to be about six pounds, with the females averaging around four pounds.

Harvest time is between 11 and 18 weeks, and they tend to be active layers and produce about 104 eggs a year.

Typically, they come in a brown with cream color, but they can also be black, blue, red, buff, or white.

If you want an active forager, the Egyptian Fayoumi Chicken is the best option.

This breed enjoys hot climates, but quite wild at heart.

Still, these chickens aren’t aggressive and can resist a variety of diseases.

Usually, this chicken is white and black speckled, but it can also be silver.

Generally, they mature faster and are ready to harvest in just 14 to 18 weeks.

They can produce about 150 eggs a year, but they don’t grow very big.

Typically, the male is five pounds, and the female is just four pounds.

They taste amazing, too, both the meat and the eggs.

The Chantecler bird also tends to thrive in colder climates. In these cases you might need a chicken water heater.

This breed can lay about 200 eggs a year.

It is highly docile and can mature in just 11 to 16 weeks, making it one of the faster-growing chicken breeds.

Thus, the female lays eggs quite early in their life and can then be used as one of the best meat chickens.

Though they enjoy feed, they can also forage, making them ideal for free-range.

The Buckeye is a beautiful mahogany red and loves the cold.

It can also adapt to its surroundings well, plus it tends to be docile and disease-resistant.

Still, males can become moody toward cats and other small animals.

If you live in the northern part of the USA, then this is the bird for you.

It doesn’t have dwindling populations throughout winter, so you can have the chicken no matter the temperature.

Usually, the male weighs about nine pounds, with the female weighing about 6.5 pounds.

It can take anywhere from 16 to 21 weeks before it is ready to harvest, though you get about 200 eggs a year until then.

Meat-Producing and Egg-Laying Chickens: Are They Different?

Is there a difference between meat chickens and laying chickens?

Yes, there is quite a difference here.

Generally, meat chickens are called broilers and are bulkier and bigger to be consumed later.

Often, they include more muscle tone than layers, which means you can get tender meat.

Additionally, broilers are male or female, while layers can only be female.

Keep in mind that female meat chickens can produce eggs, too, but they do so at slower rates than a laying hen.

You should be aware that meat birds require a different diet than layers.

The hens can eat the feed, but they are going to get too big to lay eggs.

Regardless of whether you choose a dual-purpose or a traditional broiler, you need to feed them appropriately.

Otherwise, you risk them getting too big or not big enough.

Generally, all of these birds on the list have similar diets.

To make sure that the chickens have the right fat-to-meat ratio, you should feed them on the 12/12 schedule.

Food needs to be accessible for about 12 hours each day and removed for the rest of the time.

Water needs to be available, too, but it should be put on the opposite side of the food.

That way, they have to walk just enough to create some muscle so that they don’t just become fat.

Keep in mind chickens can be quite lazy.

Usually, they are going to thrive if you use the food and water setup mentioned earlier.

They need enough food to get plump and ready for consumption within the time frame specified for each bird.

Though they aren’t likely to mix the food and water, you need them to get just enough exercise.

The same applies to humans; we need enough calories to survive, but we need the right amount of movement so that we don’t gain extra weight.

You don’t want to force the chickens to overeat since their meat will taste different and won’t be as tender and moist.

Both of these things are important, regardless of whether you raise the food or buy it at the store.

As you can see from the list, the best meat chickens tend to be those that are docile, foragers, and large.

They can produce eggs, but that is not their primary goal.

Though you can use them as meat, they tend to be less tender and may not have as much food to provide.

If you plan to raise chickens as a meat source, the Cornish Cross may be the best choice, but the others can be just as tasty, though maybe smaller.