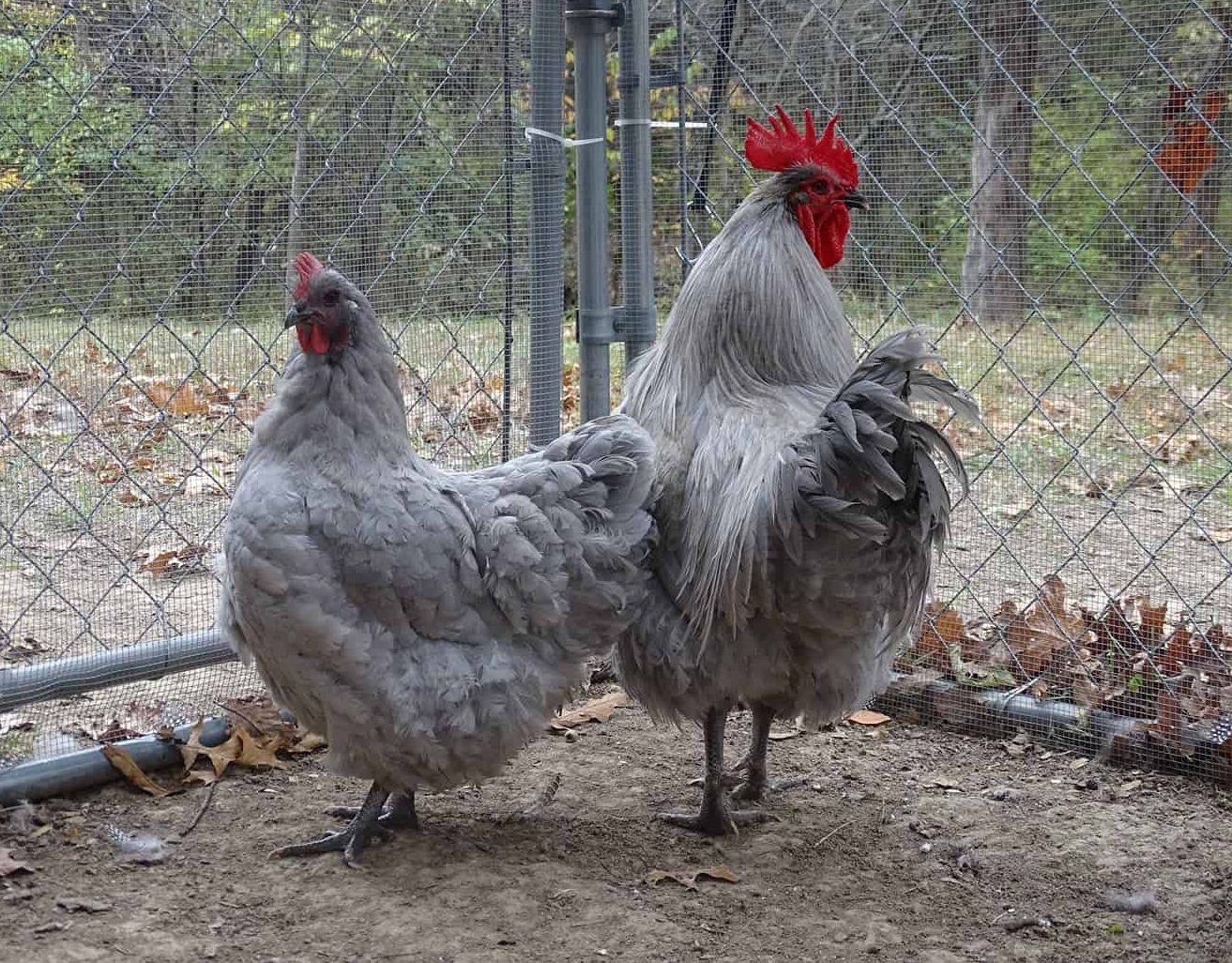 The Lavender Orpington, also referred to as the Self-Blue Orpington, is a regal breed that’s a welcome addition to most homestead flocks. They have an easy-going temperament and lay approximately 200 eggs per year. Due to their extensive feathering, they are cold hardy. They do well free-range or confined.

Its stunning plumage along with its many other outstanding characteristics makes Lavender Orpington chickens a popular choice for many homestead families. Keep reading to learn more about our fine feathered friend — the Lavender Orpington.

Created in the 1880s, Orpington breed is well known for its friendly and docile nature. Lavender Orpingtons are no exception. The Lavender Orpington chicken is often considered a designer chicken breed due to its breeding and coloration. It has a loyal group of admirers who choose to include it in their flocks for no other reason than its unique coloration.

The Orpington breed was first produced by William Cook who lived in Kent, England in the village of Orpington. His vision was to create a hardy and soft-feathered dual-purpose bird — one that was a substantial meat producer and productive egg layer. Prior to this, English chicken breeds were fairly “scrawny” and less than desirable.

He successfully produced the first Orpington, the Black, which was soon followed by the popular and well-known Buff. The breed quickly became a favorite in both England and the United States.

He and his children along with a few other individuals went on to create many other colors and patterns, including the Lavender, a more recent addition created in the mid-1990s by another renowned English breeder, Priscilla Middleton.

Show quality Lavenders can be difficult to locate. However, many quality dual-purpose Lavenders are available from hatcheries on both sides of the Atlantic.

Although a controversial practice at the time, to create the Black Orpington, Cook used different chicken breeds including the Minorcas, Barred Rock, and Langshan, and to create the Buff Orpington, he used spangled Hamburgs, Dorking and Cochin.

Despite its initial popularity, the breed was later placed on the endangered list of the American Livestock Breed Conservancy. A recent surge in poultry keeping and the specific use of Orpingtons, however, has benefited their numbers greatly.

Creating the lavender breed takes time and somewhat precise genetics because the gene responsible for the lavender coloration is closely aligned to the “tail shredder” gene which results in retarded feather development.

Lavender Orpingtons possess unique colors which can be described as pale lavender or violet, light blue or pearl gray.

It’s a large broad-bodied bird with an upright stance. They have short tails and a medium-sized, 5-pointed single comb. Its back is short and curvy. Its earlobes, wattles and comb are all red.

Their feet and shanks are slate or blue in color and generally free of feathers, although a few feathers may be seen on the shanks of non-show birds.

Their loose feathering gives them a fluffy appearance. Its full and fluffy appearance causes the Lavender Orpington chicken to appear to be larger than it really is. However, its feathers are not as fluffy and loose as that of a Cochin chicken.

Despite its large size, it has a compact physique.

Lavender Orpington roosters weigh 10 pounds. Bantam roosters weigh approximately 2.1 pounds. As far as the roosters temperament, they aren’t typically aggressive with people but will be good protectors of their flock. Overall, they are known to be less aggressive than other rooster breeds and gentler with the hens.

When raising roosters alongside hens — a Lavender Orprington rooster or any rooster — be sure to have a minimum of 8 – 10 hens per rooster.

As chicks, both sexes will have buff-colored down. The males have pale, whitish streaks in their down at the upper wing joints. Sometimes females show faint brown lines on their backs. They may have a brownish spot on their heads.

The females will have shorter tails than the males.

This breed is a great choice when raising chickens as a beginner. Lavender Orpingtons are docile, cuddly and curious.

They are very smart and friendly as well. Don’t be surprised if your free-ranged Lavenders follow you around as you go about your chores on the homestead. They love their humans.

In fact, they make great companion birds, even the roosters because they tend to be less aggressive than other breeds.

They are somewhat shy and may appear a bit reserved initially. With time, however, their personality will begin to shine through. Lavender Orpingtons love treats and special attention. If you want a lap chicken, with a bit of encouragement, the Lavender will readily become your new best friend.

Due to their quiet and calm nature, they often find themselves on the lower end of the pecking order in a flock with a variety of breeds. Knowing that they have a greater chance of being picked on, an owner may need to deal with the issue if more assertive breeds begin to pick on them excessively.

They do take to captivity and will do well in an enclosed chicken run.

The Orpington breed are quiet birds. Lavenders will be quiet as well. This makes them easy to keep in suburban and urban backyards with nearby neighbors.

If you like to free-range your flock, there are a couple of things you need to know about the Lavender Orpington. The Lavender loves to forage. If given the choice, however, they’ll hang out close to the feeders.

When free-ranging, they are not as savvy as some other breeds when it comes to keeping a watch-out for predators. Orpingtons, in general, tend to be so focused on their free-ranging activities that they forget that they’re also supposed to keep a lookout for dangers. The addition of a rooster to the flock can help with this problem.

They’ll also do well in confinement in a clean space.

As far as the purpose for raising Lavender Orpingtons, they are considered a dual-purpose breed. Most backyard flock owners raise them for eggs. When they stop producing, they use them for meat.

The hens are fairly steady layers, typically producing 3 – 5 medium-to-large sized brown eggs each week (approximately 170 – 280 each year, depending on the hen and the conditions). This makes them one of the best egg laying chickens to consider.

They’ll start laying when they are 24 weeks old or older. It’s best if they don’t find their nesting boxes before this time because they won’t have the instinct to lay.

Orpington hens lay reliably throughout the year, including in the cold months.

If raising them for primarily for meat, they are ready for the table in approximately 22 weeks. They’re among the best meat chickens for backyard farms because they are friendly and easy to raise. Otherwise, wait until their egg production wanes, after three years typically.

The Orpington breed, in general, is notoriously broody. You should expect Lavender Orprington hens to go broody at least once each year. Given the opportunity, some may even become permanent brood hens.

They enjoy motherhood and are fiercely protective of their chicks. So, if you want to increase your flock, slip a clutch of eggs under your broody Orpington and you soon have a nice little family to enjoy on the homestead.

Raising Lavender Orpington chicks will increase the ROI on your farm.

With a lifespan of 6 – 9 years, the Self-Blue Orpington is a large, cold-hearty bird. Overall, it’s a large, healthy bird and isn’t prone to any particular health issues. There are a few things you can do, however, to ensure their continued health.

With their fluffiness, they are prone to mites and lice. They do enjoy a good dust bath, which will help. Dust baths should be available year-round. Therefore, an indoor dust bath is useful during the winter to help with this issue.

Even with dust baths, you’ll need to regularly inspect them for infestations, especially under the wings and around their vent. You may want to treat them on a regular basis to prevent any serious issues from developing.

The biggest issue with the Lavender Orpington is its weight. They like to eat… a lot. This can lead to obesity. Therefore, you’ll need to monitor their weight. When necessary, ration their feed.

Excess weight can lead to many health issues you want to avoid including reproductive tract issues (egg-laying difficulties), heart problems and leg problems.

Due to their size and weight and to avoid leg injuries, their perches should be lower than some other breeds of chickens. Have enough chicken nesting boxes for the hens.

Although the Lavender Orpington is very cold-hardy, they can become chilled and die fairly quickly if they become wet. They’ll need a well-ventilated and dry space in the colder months.

Consider their larger size and ensure the chickens have enough space. While it’s typically a minimum of three square feet per chicken, with larger breeds such as Orpingtons, they should have at least four square feet each. Be sure to have a chicken coop and run area protected with chicken coop wire to keep predators out.

Heat and high temperatures, on the other hand, can be problematic due to their dense plumage. To alleviate heat problems, the Lavender should have plenty of cool water, shade and dust baths available to them. Excessive sunlight will cause its plumage to fade into more yellow or tannish overtones.

They lay medium and large sized eggs. They are typically 21- 24 ounces each.

Due to their popularity, they are becoming easier to find. Overall though, they are rare. This is because the lavender gene is a recessive trait. Both the mother and father each need to have the gene to hatch Lavender Orpington chicks. They breed true.

This designer bird has light gray and charcoal feathering which appears lavender, violet, and blue. 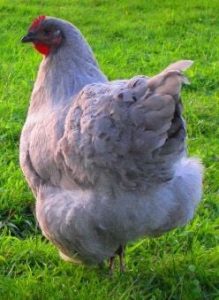 The lavender chicken is an easy addition to most flocks, and in my opinion, are one of the best chicken breeds to raise. They produce eggs reliably. When the hens stop laying eggs, you can use them for meat or as a pet.

Keeping them protected from predators, and if in a mixed flock, away from aggressive breeds, and you will have happy Lavenders.

They have friendly dispositions and are also good foragers, making them ideal for insect management in your backyard, garden, or on your hobby farm. Choose them and other Orpingtons if you are a beginner or if you live in a cold climate, and want a steady source of eggs and meat.