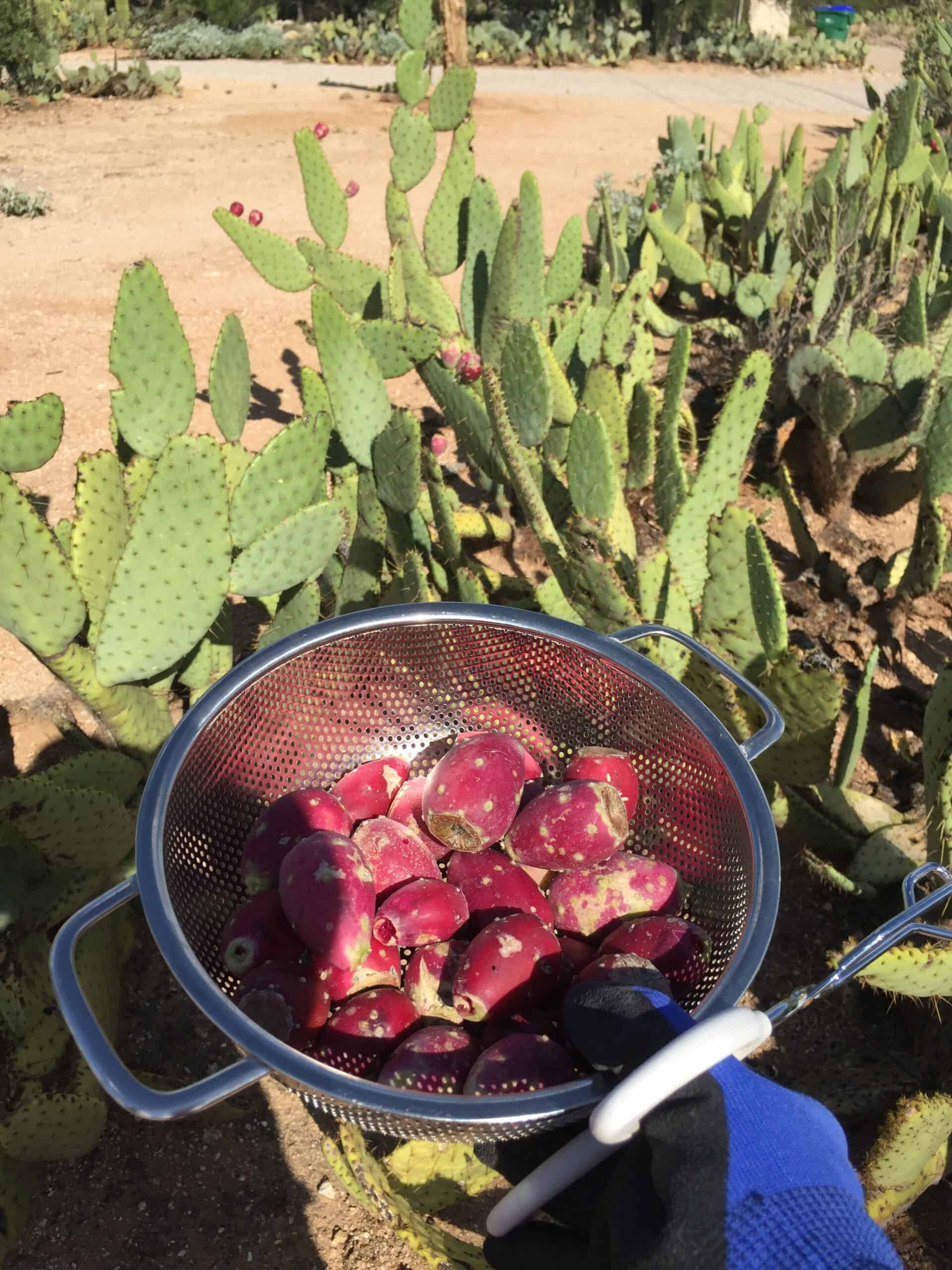 Learn how to harvest prickly pear safely. I live in Tucson, Arizona, and have at least 30 prickly pear cactus plants on my property. We lost a few to a record-breaking drought a few years back. Aside from that, we have done nothing to maintain them and enjoy the harvest of prickly pears each year.

We moved to Tucson when my son was in second grade. The first full week of school, in August, his class went on a field trip to pick prickly pear. The trip was a walk across the school field to the house next door. The front yard had lots of prickly pear cactus. Even though it was barely 9 am, it was over 100 degrees F. The kids were troopers and likely way more used to the heat than I was.

The students brought tongs from home, wore gloves, harvested the prickly pears, and dropped them in buckets. A few of the teachers processed them and froze the juice. Then in the spring, they used it to make prickly pear punch and prickly pear salsa for when the students’ desert festival. It was the shortest and most interesting field trip I’d even chaperoned. Since then, I’ve enjoyed picking them on my property.

The prickly pear cactus, Opuntia ficus-indica, is a succulent plant native to the Americas. It is a popular food and medicinal plant in many parts of the world. The fruits are called cactus pears or tunas and are edible. The fruit can be eaten raw or cooked. Prickly pears can be used to make jams, salsa, popsicles, smoothies, punch, cocktails, and more.

Gloves and tongs are essential when picking prickly pear. Do not harvest prickly pear unless you have them. You will see spines growing on the prickly pear cactus and may think, “I can avoid those, no problem.” And you likely will be able to.

What you won’t be prepared for are all of the tiny cactus spines and needles on the prickly pear fruits. You won’t even see them yet they will pierce your skin. Unlike with larger cactus needles, it will be difficult to remove them with tweezers. Trust me on this. Tongs and gloves are essential.

Always be vigilant about looking for rattlesnakes when you pick prickly pear, especially if the cactus you are picking from has lots growing around it. You may want to harvest the pears in the early evening when snakes may be easier to spot without the sunlight.

Here I explain more about this cactus, when to harvest the fruits, what you need to harvest prickly pears, and what to do once you’ve picked them.

Prickly pear cactus can be found throughout the American Southwest growing natively. People also plant it for native landscaping. In hardiness zones 9 – 11, it’s a drought-tolerant plant with spines. It is easy to grow and requires little maintenance. Some varieties can be cold tolerant in zones 4 – 8 and spineless as well.

Desert plants serve multiple purposes, especially in the brutally hot summers. They serve as protection, shade, and shelter for wildlife. Many desert critters also eat the cactus and the fruits. Living in hardiness zone 9b, many people choose native plantings to help preserve the ecology of the area. As well as helping wildlife, prickly pear plants can help with preventing erosion and can be part of a plan to reroute rainwater.

Along with mesquite pods and other desert plants, prickly pear fruits can be used as survival food. People who have prickly pear growing on their property often enjoy harvesting them and putting the juice in ice cube trays to enjoy throughout the year.

When to Pick Prickly Pear

Pick prickly pear fruits when they are dark red. Prickly pear harvest time can be anytime from late July into August and perhaps into early September. Different plants will grow them at different times. The important thing is once they are ripe, the longer you wait, the more you will be competing with wildlife and insects who enjoy feasting on the fruits.

If you have a lot of prickly pear cactus on your property, take note in the spring where they are and which are blooming. As the fruits develop, they produce gorgeous blooms. Depending on the rainfall and other factors, some may not produce fruit every year.

Around the beginning of August, take another look around at the cactus plants and see which have fruits. You’ll want to note these so you can check them regularly.

When prickly pear tuna fruits turn a dark red, they are ready to harvest. Don’t pick them with your hands. I explain below how to harvest them.

It’s important to keep checking the cactus because the pears will ripen at different times. Some of the wildlife will eat them, but hopefully, you have a lot of plants and fruit so everyone will get their fair share!

How Can You Tell if a Prickly Pear is Ripe

You can harvest prickly pear throughout August as they turn red. If they are pink, leave them on the cactus longer. Depending on the season, you may be able to pick them in the first week or two in September. However, many will likely have insect damage by then or be eaten by critters. Still, depending on how many cactus you have, you may be able to find a few fruits intact. Look for lush fruits. They should be easy to remove from the cactus with tongs.

Depending on where the prickly pear cactuses are growing and how many other cacti and brush you will need to get through, you may want to wear boots or pants.

Although the fruits have thorns on them, they are easy to remove by blending the entire fruit and straining with a cloth.

How to Harvest Prickly Pear

Tips: Do not harvest prickly pears with bite marks; leave them for the wildlife. Watch for rattlesnakes constantly. Always wear gloves around prickly pear cactus plants and use tongs when handling the fruits.

It’s best to wash fruits and process them outside. This way, you will minimize the risk of getting the spines in your kitchen. Many of them are difficult to see and troublesome when they get into your skin. Trust me on this!

While you are still outside, do the following:

Tip: Sometimes I bring a pitcher of kitchen water outside and pour it over the prickly pears after rinsing them with the garden hose. This isn’t necessary but sometimes makes me feel better that the water is cleaner.

How to Store Prickly Pear Juice

You’ve done the sort of hard work of picking prickly pears, cleaning them, pulverizing them to extract the juice, and cleaning up. Hopefully, you’ve been able to do all of this without encountering a rattlesnake or Gila monster and without getting pricked.

Now it’s time to do something with the prickly pear juice. Most people harvest the fruits and store the juice for a later time. You can do this by freezing the juice or refrigerating it if you will be using it soon.

You can freeze the juice in ice cube trays. This makes them convenient and ready to use when you want to put them in cocktails, in smoothies, or in any drinks you want. You can use the prickly pear ice cubes in lots of ways. You can also put the juice in molds to make prickly pear popsicles. Just know you’ll want to add a bit of sugar, honey, or sweet fruit because prickly pear on its own isn’t sweet.

You can put the juice into any container you want as long as it’s freezer-safe. It will keep for 12 months… perfect for when you harvest the next time!

If you want to use the juice to make something within 5 days, you can refrigerate the juice. Make sure to put it in an air-tight container.

What Can You Make with Prickly Pears

There are lots of things you can make them with juice from prickly pears:

If you decide you want to pick prickly pears growing on your property. You will have some competition. Lots of desert wildlife feast on prickly pear. Javelina, pack rats, squirrels, deer, and birds, as well as other wildlife. Cactus beetles will often get to prickly pear as well.

Many prickly pears are difficult for wildlife to access and are out of reach for them. Those are good ones to pick because they will likely be intact. When picking prickly pear, leave the ones that are partially eaten for the wildlife.

Living in Tucson, Arizona, we have lots of prickly pear cactus on our property. Most of them are Engelmann prickly pear. In years with good monsoon rains, we will get a lot of prickly pears. In drought conditions, we grow fewer.

The genus Opuntia (particularly the subgenus Platyopuntia, or “flat-Opuntia”) is a well-known symbol of Mexico and the American Southwest. They have spines and produce beautiful flowers and dark red and purple fruits. The fruits, also called tunas, are nutritious and a good source of fiber.

Prickly pear cactus has additional uses. U.S. Forest Service also says that during droughts, prickly pears can be made into livestock forage. In addition, the young cactus pads, once stripped of their spines, can be boiled and eaten. When prepared this way, they are called nopalitos. This is common in the Southwest as well as in Mexico.

As long as you take precautions, picking prickly pear is easy. Learn how to harvest prickly pear and wear gloves, use tongs, watch for rattlesnakes, and clean and process them outside so the spines don’t get in your kitchen. Once you’ve picked them, you’ll find it less intimating the next time.

Situate all your prickly pear harvesting tools outside before you start picking.

Prickly pear is desert survival food. It grows without much maintenance or care. You can use prickly pear for jam, smoothies, punch, popsicles, cocktails, and more.

People who garden in the desert spend hours tending to their fruit trees and garden in the summer. Yet the prickly pear thrives without any effort at all! Growing prickly pear cactus is a great way to add some color and interest to your property.