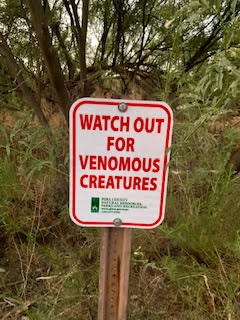 One of the benefits to rural living is seeing wildlife. When we set up our homestead in Tucson, Arizona, we didn’t expect to see desert wildlife on our property daily. Mammals, reptiles, birds and amphibians are right outside our window. Once there was a lizard in our kitchen sink.

We’ve seen a mountain lion snatch a rabbit. Another time, we watched a Gila monster amble by. We saw a coyote feast on kangaroo rats from a hole. In addition, we’ve seen a variety of snakes, javelinas, bobcats, roadrunners, packrats, ground squirrels, raccoons, a variety of toads and lizards, quail families, hawks, roadrunners, rabbits, bats, and owls.

While Tucson is a thriving city, we live in an area of town very close to the base Mt. Lemmon. It’s northeast of downtown Tucson in an area called Tanque Verde.

There is abundant wildlife in this area of native desert habitat. We see fauna on our property, traveling through dry washes in search of prey, and when we are out driving or walking along the dirt roads and paved streets.

This has been a huge advantage to moving out of the suburbs into a more rural area. We will continue to update this is pictures and videos of wildlife.

Many types of wildlife thrive in the desert. Here is some of what we’ve seen. 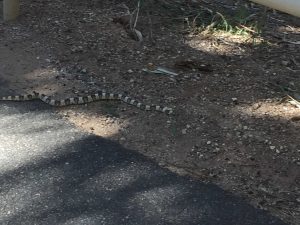 A few times we’ve seen (non-venomous) Sonoran Mountain Kingsnakes on the road. They resemble the Sonoran Coralsnake which is venomous. There are many varieties of snakes in the Sonoran Desert.

Desert dwellers love having non-venomous snakes on their property. (More reptiles below.)

Mammals in the Sonoran Desert

Before moving to Tucson, we didn’t expect to see so many desert mammals. We see coyotes and bobcats regularly.

We see bobcats often, but there is one we see regularly taking the same path. The bobcat comes out and walks under along the front of our shaded house to where we can no longer see it to hunt. We see it on his/her way back with something in its mouth.

We’re not sure if they are packrats, ground squirrels, kangaroo rats or other small mammals. One time, we scrambled to video the baby bobcats when we saw a bobcat with her babies. They were so cute!

We see coyotes galore outside our front window and in our neighborhood. Coyotes cross Catalina Highway, Tanque Verde Loop Road, and Soldier Trail at dusk. We see them in the washes and often trotting down the street. Once, when I was walking behind a residential neighborhood approximately two miles from my home, eight coyotes crossed the road. They were half a block ahead of me — they just kept coming, one after the other! They didn’t pay me any attention, however, I turned and walked back from where I came from! 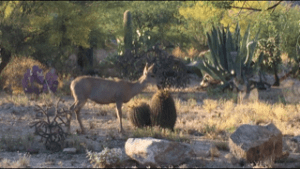 While we’ve seen deer within a mile radius of our home, this past spring and into early summer is the first time we saw them on our property. We saw them five different times. 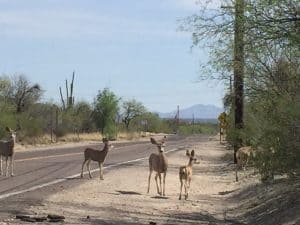 Sometimes they were just passing through and other times, they stayed awhile to eat from the tops of the barrel cactus and from some bushes.

Twice we’ve seen mountain lions. Each time, there was just one of them. While it was in different years, the mountain lion was in our property in June, before the monsoons. Both times, at first we thought it was a very large bobcat. However, mountain lions stand taller and are larger.

When we learned there were mountain lion sightings in the Tanque Verde area, we realized that’s what it was. There were several posts about mountain lions on the neighborhood NextDoor site.

We see javelinas often around dusk. Homeowners know to keep their garbage cans secure so the javelinas don’t tip them over. Like with all wildlife, residents here know not to approach javelinas.

Other desert mammals we’ve seen around are black-tailed jackrabbits, a badger, Harris’ antelope squirrels (we thought they were chipmunks), pack rats, kangaroo rats, ground squirrels, a coati, bats, and raccoons. We saw raccoons with a toad. My husband shined a light on them to see them better. A few minutes later, the raccoons came back, stood on their hind legs, and peered into our window. They wanted to see what the light was! It was incredible to see how smart they were.

So far we haven’t smelled or seen any skunks near our property though I did see one while camping at Molino Basin on Mt. Lemmon. Learn about how to harvest prickly pear. That’s one desert fruit we share with the wildlife.

Arachnids in Tucson – Spiders in the Sonoran desert

Most of the spiders we’ve seen have been “good spiders.” These include wolf spiders and tarantulas. We leave these spiders alone — transport them outside — because they help with pest control. We have wolf spiders in our home often — including on top of our stove-top! Twice! There are tarantulas as well. You will especially see them active at night, though we’ve seen them in the day. So far we haven’t seen brown recluse spiders or black widows.

We learned the more residential the area, the greater chance scorpions will be inside your home. The more rural your property, the less likely you will find them inside. This has been the case with us and our Tucson scorpion experience.

Our first home in Tucson was in a gated community — not very rural — and we had scorpions in our pool, out on our patio, and inside our home frequently. Now that we live in a rural setting, we’ve only had them a few times inside our home. We’ve seen bark scorpions and whip-tailed scorpions since living here.

We see them so regularly we don’t think to take a picture. Soon we will add some pics.

When we visit Agua Caliente Park, we are sure to see turtles in the ponds.  In addition, many people are custodians of Sonoran Desert Tortoises outside their homes. The Sonoran-Desert Museum has a Tortoise Adoption Program and offers information.

Birds in the Sonoran Desert

There are many bird species in Tucson. Roadrunners, quail, hummingbirds, and hawks are a few of the birds we often see. We see cardinals, wrens, doves, and woodpeckers. There are other desert-loving birds as well.

We see woodpeckers on the high reaches of saguaro cactus. Hawks soar through the sky. At dusk, there are different bird species that swoop down by our pool. Depending on the time of year, we see quail families — the adults quail shepherding their little baby quail. It’s common to see them crossing the road. Learn about quail eggs.

Nearby Agua Caliente Park has many bird-watching opportunities. They have a board outside which lists all the bird species common to the Tucson area. It lists which birds are present year round, which are present in the winter and summer, and which are migratory. It also lists if the birds are common, uncommon, or rare. Visitors and staff can mark off the birds they see in the park that month.

Amphibians in the desert

We see tadpoles in the washes in the spring. In the summer, we see frogs and toads galore — some big, some small. Some are outside our patio doors at night and some we find swimming in our pool during the day. Common Sonoran desert toads include the Colorado river toad. We see them often. They are harmful to dogs. We don’t touch any toads (or any other living thing).

Insects in the desert

There are many types of insects in Tucson. What we see depends on the temperature, season and weather. 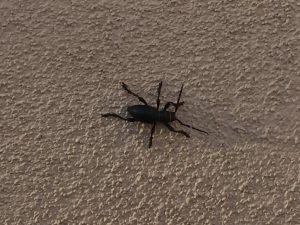 A lot also depends on how much rain we did or didn’t get. We’ve seen so many different insects living here.  After a rain, our pool will be filled with flying ants. When we turn on an outside light, we attract many different species, including many beetles. Tarantula hawks are a type of insect that prey on tarantulas. We see them often during Tucson summers flying around. Twice we saw them with a tarantula.

There is always something interesting coming or going!

There are many places to visit in Tucson to see wildlife. If you enjoy seeing them in their desert habitats, you may get to see them when you visit Saguaro National Park, Sabino Canyon, or driving out to Redington Pass.

In addition, the Arizona-Sonoran Desert Museum is 21 acres of desert in which you can see animals in a desert setting. You can also see the pollinator gardens, walk through the aviary, and see other animals such as the Mexican gray wolf, Black bear, Bighorn sheep, javelinas, and more.

Taking a drive up Mount Lemmon will take you to additional eco-systems, depending how far up you go. Starting off, there are opportunities to see wildlife in a desert setting. The higher up you go — it reaches 9,157 feet — you will see different wildlife. There is also the Reid Park Zoo.

In rural areas, you will see more wildlife. We love seeing the wildlife and try to keep as much of the property native desert so we can encourage wildlife habitats. Animals come and go — able to pass by undisturbed.

Over time, we’ve set up solar, a rainwater harvesting system, gardens, a woodworking area, hydroponics, and more. Our two-acre homestead affords us privacy. However, everything we are doing to have a more rural experience we could do with much less land.

It’s important to note, we don’t feed any wildlife. We don’t have bird feeders. Also, our garbage cans are in a secured area so javelinas can’t get to them. Many residents put water out to help the animals. We haven’t because we don’t want to attract mosquitoes.

We had no idea there were so many species of mammals, amphibians, reptiles, birds, and insects native to Tucson. On any given day, we can see 10+ different types of animals and other wildlife. It’s really an incredible experience and an unexpected benefit to living a more rural lifestyle in the desert.