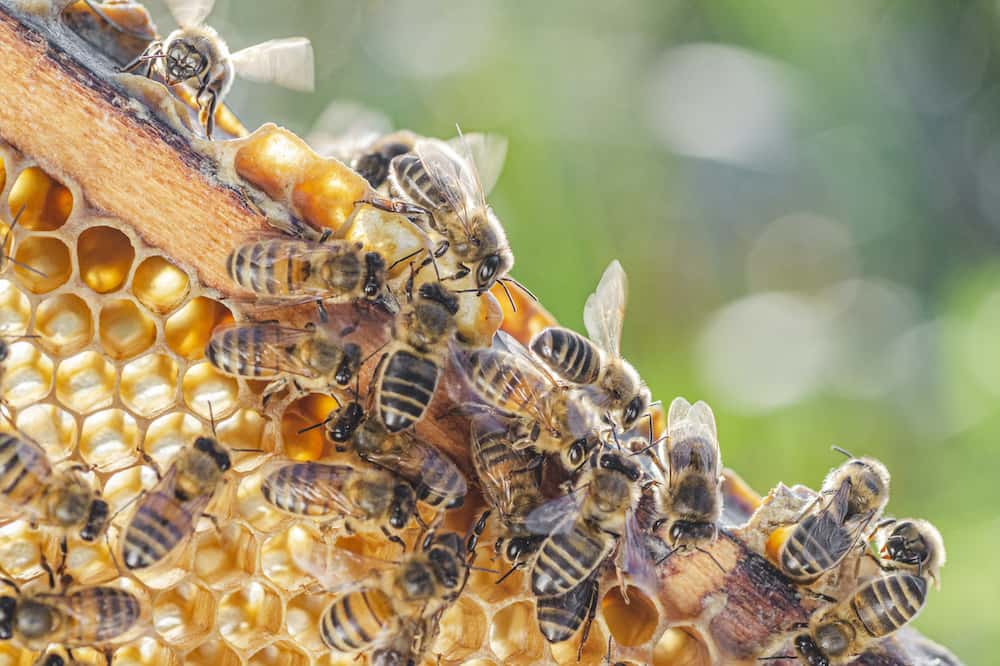 Answering, “How long do honey bees live?” can help you understand your hive better.

As a beginner beekeeper, you’ll need to know your colony’s phases and the life cycle’s ins and outs. Honey bees are great additions to your homestead. Understanding the honey bee’s life cycle can help ensure your gardens are pollinated.

How Long Do Honey Bees Live?

There are a few vital characters that go into the healthy maintenance of a hive. Each type of bee will have a specific honey bee lifespan, which is also influenced by many factors.

How Long Does a Worker Bee Live?

There’s no doubt that worker bees hold their weight in a colony, affecting their longevity.

There are plenty of different jobs that worker bees are responsible for, including collecting nectar, scouting for pollen, and building the hives.

As their name suggests, worker bees continually work until their death. When in an active season, you can expect your worker bees to die within five to six weeks.

On the other hand, overwintering bees can last up to six months because there’s less work for them to do.

During the end of their life cycle, you’ll see significant changes in their physical appearance. For example, their wings will be ragged, so they’ll fly slower than usual.

These issues occur because they exhaust themselves foraging pollen, nectar, and recruiting more foragers.

Although it’s challenging to track, your worker bees can die after flying 500 miles in their lifetime.

How Long Do Drones Live?

Drone bees don’t have a significant purpose when it comes to the hive, at least not like worker bees. They don’t produce wax, offer food, or feed the young.

Their sole purpose is to mate with the queen; however, many worker bees see drones as a waste of hive resources.

If a drone bee fails to mate, they become a waste of important resources with their fate in the workers’ hands.

You’ll often find the worker bees will kill the drones or kick them out of the hive. This decision causes them to die during the winter, especially as worker bees need to preserve their resources.

Drone bees leave their hive six days after exiting the pupal stage, going to drone congregations. They then return to the hive if they are unable to mate with the queen.

Interestingly enough, if they are successful with their venture, they die within minutes or hours.

Most drone bees are likely to die from starvation or cold, especially if they’re unsuccessful maters. On average, a drone’s lifespan is eight weeks in total.

How Long Do Queens Live?

Depending on your view, queen bees are the most important bee in the hive, and they have the most extended lifespan.

After their pupal stage, queen bees fly to mate with 20+ drones and then return to their hive to lay eggs.

Queens can lay up to 2,000 eggs per day in the hive since she stores enough sperm to fertilize for her entire lifetime.

Another exciting aspect of queen bees is their fertilization determines the gender and purpose of the bee. Fertilized eggs turn into females, which could be workers or queens.

On average, queen bees can live between two and five years, depending on their hive. There are rare instances where queen bees have lived up to seven years.

Winter is one of the most crucial times for queen bees since her survival depends on her hive.

Worker bees are just as critical of their queen as they are of drones, keeping an eye on her to make sure she’s working.

If the queen isn’t laying enough eggs, the worker bees will start to develop a new queen to replace her. Their attention will be directed solely to the new queen, leaving the old one to waste away.

By far, the queen bee lasts the longest out of the hive, but she needs to ensure she follows through with her job.

With an average lifespan of up to five years in a self-sustaining hive, they far outlive any workers or drone bees by years. Managed hives might require a new queen every two years, mostly if the current productivity is low. 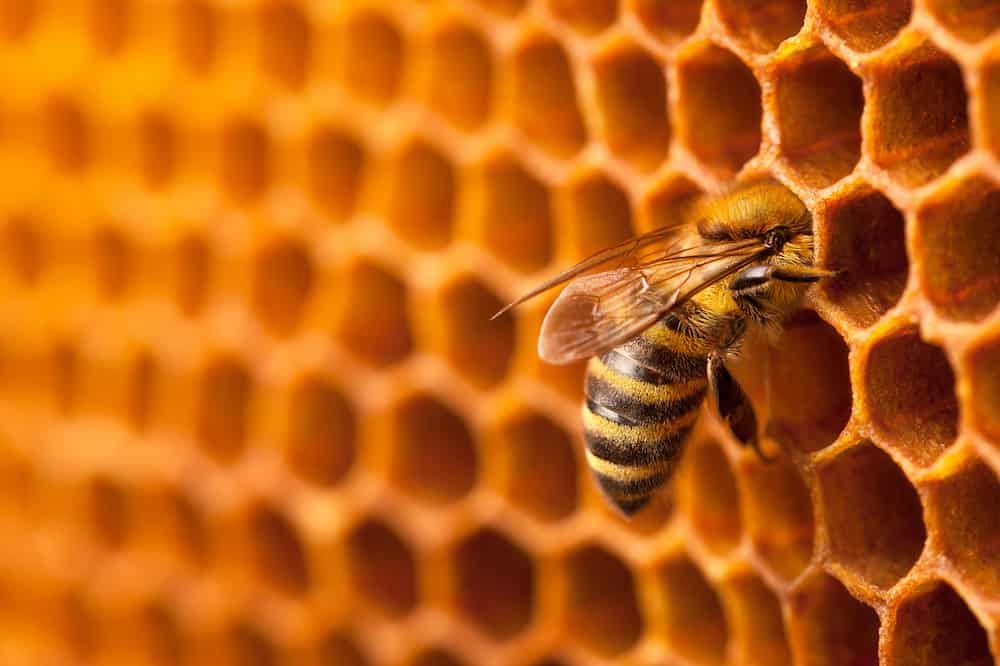 Many factors influence the answer to, “What is the lifespan of a bee?“

From pesticides to climate change, there are many things to consider when owning a hive.

As the climate changes, as does the honeybee’s life cycle, which we have already started to see worldwide.

Humidity and temperature are two factors that must be maintained for optimal bee health.

For example, broods must be maintained at 34 degrees Celsius during the spring or summer.

In the winter, broods have to stay above 13 degrees Celsius; otherwise, they will freeze. Exposure to prolonged episodes of cold and wet weather can negatively impact the development of honeybees.

Also, increased temperatures can affect the memory and learning capabilities of bees.

In the past, pesticides were an exceptionally larger issue than they are today. Most manufacturers have produced new insecticides that reduce the number of bee fatalities.

By reducing the amount of sprayed pesticides in the air, bees can live safer than ever before.

As a beekeeper, one of the most critical parts is to ensure your colonies thrive. With improper beekeeping practices, you can notice a significant number of fatalities.

Some of the most common issues include:

Honey bees are some of the most docile stinging insects, as long as they are left alone.

Some of the most experienced beekeepers can handle bees with their hands without getting stung. With that said, everyday humans need to take care to ensure they aren’t frequently killing insects.

It can be easy to mistake a honeybee for a yellow jacket, but doing so can be disastrous.

The more bees we kill, the more at-risk our planet becomes. You must avoid killing honeybees, if at all possible.

Even if you find that you have a hive near your home, there are proper avenues to consider. First, you can call an exterminator, who will determine the species you’re dealing with.

They will then make the appropriate arrangements to hand the hive over to a professional beekeeper rather than killing them.

Alternatively, you could choose the free option of reaching out to a beekeeper yourself. The majority of beekeeping organizations know apiarists who are willing to remove bees from your property for free.

They’ll love to get their hands on your infestation to help bolster their managed hives’ population.

Even though it might be tempting to spray beehives to kill them, it’s far better to have them rehomed.

How Do Honey Bees Die?

There isn’t a single answer to “How do honey bees die?” since many factors influence their survival. Outside of human borne issues, several natural factors, like disease, also put your bees at risk.

Parasitic mites can be exceptionally damaging to the health of your honey bees.

Varroa is a highly mobile mite that can move quickly between all of the bees in your hive, interrupting their natural processes.

Another significant issue with parasitic mites is that they can be spread over long distances since they live in their hosts.

The different types of infections bees can have include:

Currently, there are over 18 different bee-specific viruses found worldwide, although they vary in infectiousness.

Varroa mites encourage the spread of viral infections throughout the honeybees and have been doing so for over 40 years.

If your colony is dealing with a fungal infection, you’ll see noticeable signs of the disease.

The fungus will enter the bees’ digestive cells, causing the spores to multiply at an incredible rate. The spores are then transmitted to other bees through the wax, pollen, honey, and royal jelly.

You’re most likely to find fungal infections during the warmer months, especially in hot climates.

Nosema is the most recognized fungus that can affect the overall health of your honeybees.

You also have to keep an eye out for bacterial infections. There are two to consider. American Foulbrood (AFB) and European Foulbrood (EFB) kill larvae by infesting larvae tissues.

These bacterial infections progress until the entire colony has died. Most of the larvae infected will die from starvation, while survivors will turn into undersized adults.

Even though CCD is one of the least likely issues your colony will experience, it’s still important to consider.

Colony Collapse Disorder occurs when the worker bees in a colony leave the queen behind.

There will typically be a couple of nurse bees and food left behind to help take care of any remaining bees and the queen.

There are a couple of factors that could influence CCD, including weather and pesticides. It became most prevalent during 2006 and 2007 when beekeepers noticed high losses of their hives.

The symptoms of the losses were unlike any of the common causes of bee death and included:

Since worker bees are the backbone of the colony, bees can’t survive without them.

CCD was such a unique phenomenon that researchers began to believe it would cause permanent long-term damage. However, the rates of CCD have steadily declined since 2006 and 2007.

Did you know that bees have an extensive list of predators to watch out for?

Skunks, hive beetles, bears, and Africanized wasps are just a few. Like skunks, insectivores search out hives at night and attack.

Instead of eating them whole, skunks suck the juices out of the bees and spit out the rest. Opossums and raccoons are known to feed on hives in the same ways.

Bears are another notable predator because they can smash the entire hive to extract honey from the bees.

When it comes to hive beetles, their nature is to be destructive to beehives. They will lay their eggs on the honeycomb so that the larvae will eat the honeybee larvae, pollen, and the honeycomb.

Adult hive beetles are also known to eat any eggs produced by the queen.

How Long Do Bees Live Without a Hive?

There isn’t an average lifespan of a bee or exact amount of time for a bee to live without a hive since the circumstances can vary.

Especially as you now know, worker bees routinely kick out drones, and drones can die within hours.

Alternatively, bees that get trapped inside a house can fly for up to 40 minutes before dying.

Even most bees live outside of their hives, with only 10% staying behind for work and protection.

Solitary bees live alone or in small communities, and since there are over 20,000 species of solitary bees, they’re in abundance.

With that said, you can guarantee that it’s easy enough for bees to live outside of their colony since they do so anyway.

It’s highly likely bees will live out their full lifespan, even if they encounter honeybee drift. This phenomenon is more likely when hives are close to each other, but it can happen if bees separate themselves too far.

Some bees will drift from one hive to another with honeybee drift, although they might not be allowed into the new one. If that is the case, they are likely to die of starvation.

What Is the Lifespan of a Bee?

The average lifespan of a bee can vary due to numerous circumstances. We all must work towards providing a healthier environment for bees to ensure our planet’s success.

By answering, “How long do honey bees live?“, we can easily provide the ideal conditions for them to reach their full lifespan.