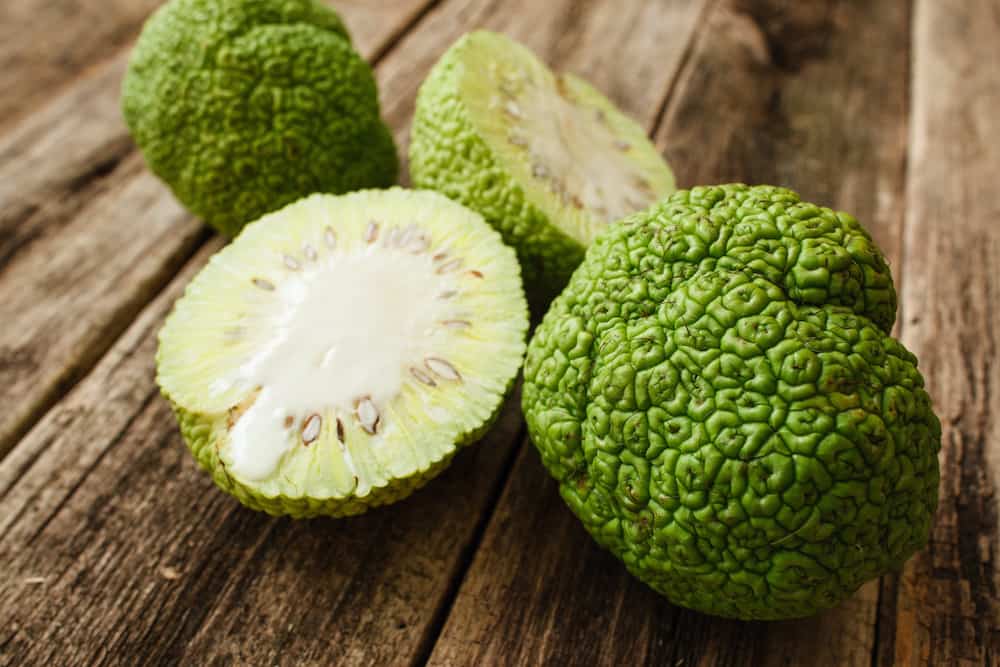 The Osage orange tree is also known as a bodark, hedge apple, prairie hedge, yellow-wood, bow wood, naranjo chino, or horse apple. If you have not heard of this tree before, you may be surprised when you see it, most especially the ugly fruit that it produces.

The Osage orange fruit is the size of a large orange or grapefruit, and it has a warty-looking surface. It is green in color, though, not yellow or orange, and the surface is covered with coarse hair.

So, what is this hedge, and why would anyone want to plant it? The Osage orange tree isn’t extremely well known, but it actually has a very historical meaning. Here are the interesting facts this tree is known for.

Osage is the only member of the Maclura genus that still exists today. Sadly, other plants in the family have become extinct, and we only know of them thanks to fossil evidence.

The tree is related to the fig and mulberry tree, as well as to a lot of semitropical and tropical trees. When the Osage orange tree reaches its maturity, it can grow 35 – 50 feet tall, and the trunk can grow up to two feet in diameter.

The branches grow up into a round shape when left to their own devices, but many people train these hedges to form fences and barriers.

This means that the trees often are not allowed to grow naturally and, instead, grow into what looks like one large row of hedges.

The tree flowers between May and July, producing flowers that, surprisingly, appear green in color. The bark of the tree is deeply furrowed, and it is dark orange in color.

When you look at the leaves, you will notice that they are long and shiny. They can grow to as long as five inches in length, and they are dark green in color. The leaves have a shape that looks like an egg, and they have a point at one end.

There are also a lot of thorns on this hedge, which are strong and sharp. These thorns help when you want to form a barrier that is difficult to penetrate. Because of this characteristic, this is a good tree to plant if you want something you can use to keep people or animals in an area or out of an area.

What is the Osage Orange used for?

For many years, thousands of miles of these trees were planted in the East, Midwest, and South. Over time, the trees had adapted well, and today, you can find the Osage orange tree from the Great Lakes to the Gulf of Mexico and from the Eastern Seaboard to the Great Plains.

With that said, what are they actually used for?

The Osage orange was a very handy tree for Native American Indians, who used it for centuries to make bows. Osage Orange trees are also called by their French name: bois d’arc or “wood of the bow.”

It wasn’t until explorers came out West that it was really discovered, though. Ultimately, this tree became a very important part of life for many years.

French settlers were exploring the area west of the Mississippi River, which is now modern-day Oklahoma, Texas, and Arkansas, when they came across the Osage people.

They showed them how they used the wood of the tree to make their bows. These pioneers called the tree the bow dark, which was then became known as the bow wood.

The French settlers found the Osage orange to also be a valuable resource for wood, and they used it a lot because of its durability and strength. They used the wood for everything from their covered wagons to wagon wheels, as it could bear a heavy load.

The wood is also flexible, which makes it perfect for bending to create wheels. It can absorb shocks without cracking and splitting, and it could hold up to both moisture and mud.

Because of the many uses of the Osage orange tree, it quickly became difficult to find and grow because people would cut down the trees to make all of these things.

People also started using the wood for railroad ties and fences. It wasn’t too long before they also began to realize that they could train the tree to grow in certain ways and to use the live tree as one would use a fence.

Though it generally grows upwards, the training can allow you to grow the branches in any number of ways. Nowadays, people grow Osage orange trees to create natural borders. When mature, its spread can be up to 25 feet in diameter.

The tree is very easy to grow from a seed, and it is fast-growing, so you don’t need a lot of time to create what you want with them. In only a few years, it can form a nice-looking barrier. Any spaces in the hedge will eventually be filled with the thorny branches of the trees.

When these trees are planted close together, they grow a bit shorter. They can keep livestock inside of a certain area or create beautiful borders. 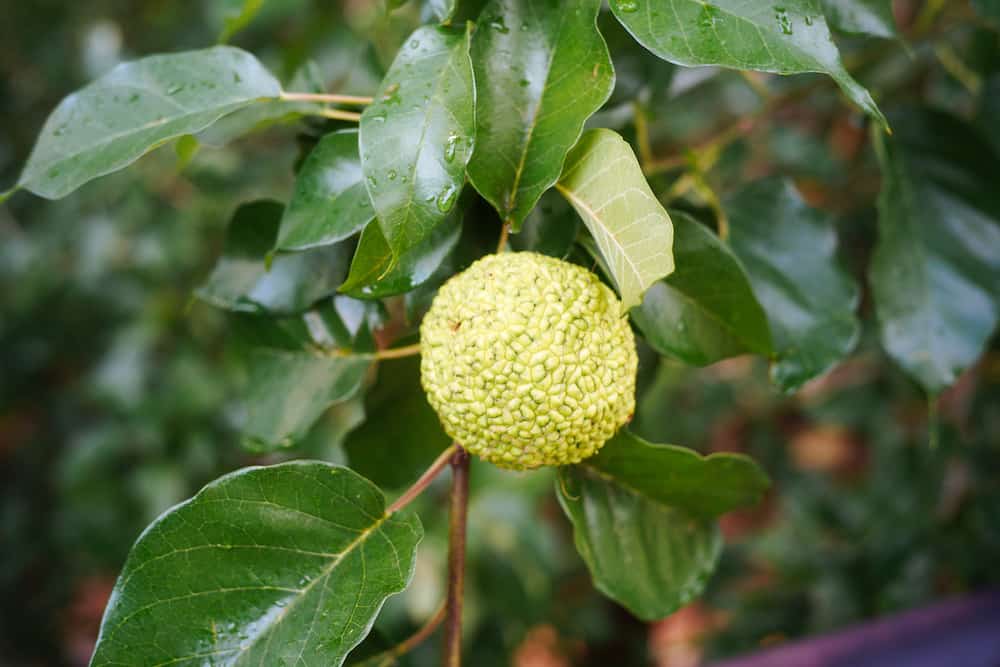 The Osage orange is an easy-to-grow tree. They grow in hardiness zones 4 – 9. You can plant it directly from the seed, and it would grow pretty quickly. They adapt well to most soil.

It is easy to collect the seeds from the fruit, too, which drops from the trees each fall. You can allow the fruit to naturally decay, and then extract the seed to plant. Each fruit has a couple of hundred seeds.

If you want to plant osage orange tree seeds, you have to allow them to go through a brief chill so as to start the germination process.

Usually, you should allow the seeds from an osage orange fruit to sit at a temperature of 40 degrees Fahrenheit for about 30 days to let the seeds start germinating.

When planting the seeds, you should put them approximately 12 inches apart. Cover each seed with a quarter to a half-inch of soil.

If you plant the seeds in the fall, you should mulch them to protect them from the winter cold. However, if you plant in the spring, you don’t have to worry about mulch; the tree seedlings should be fine. Plant Osage orange tree saplings in areas that will receive full sun.

Pests and Diseases to Watch Out For

If you plan on planting this tree in your property, you should know of the pests and diseases that affect its growth. Here are a few of the most common ones:

The biggest issue with pests when planting Osage orange trees are scales. These pests suck on the tree and eat the sap, killing off the branches. If not controlled, scales can kill off these trees.

Borers are also a consideration when you are trying to raise an Osage orange tree. These pests also can kill off the tree, and they bore into the stems and trunks.

Fall webworms are also common when you have Osage orange trees. These worms affect the branches of these trees.

Finally, you should watch out for spider mites. These may cause minor damage, but if you allow them to get out of control, they can cause the leaves to die and fall off prematurely.

Is an Osage orange tree worth planting?

In fact, professional archers tend to agree that the wood of this tree makes some of the best archery bows on the market.

Is Osage orange poisonous to humans?

Most animals, except for squirrels, do not find the fruit of this tree to be palatable. If animals do eat the fruit, there have been cases of cows, for instance, choking on the fruit, as it is so hard and not too easy to chew.

We suppose you could eat it if you want, but it has a very bitter taste, and it is very difficult to chew. You also have to get through the hairs, thorns, and the warty skin, which simply doesn’t look very appetizing. So you wouldn’t plant osage oranges for survival food like you would a hazelnut tree or other fruit or nut producing tree.

The Osage orange tree is an interesting plant that many people are not aware of even existing. The wood is perfect for certain uses, such as for making archery bows, and it can even be processed to create a yellow-colored dye.

Many people hesitate to plant this in residential areas, as the fruit can be tiresome to clean up when they fall, and the thorns can make the trees difficult to cut and control. If you get caught with one of these thorns, you can bet that it is going to hurt!

You should also know that the Osage orange can be an invasive species if allowed to be. To control the spread, you should remove fallen fruit and cut back trees that are getting too large.

8 thoughts on “Osage Orange Tree: What You Need to Know”