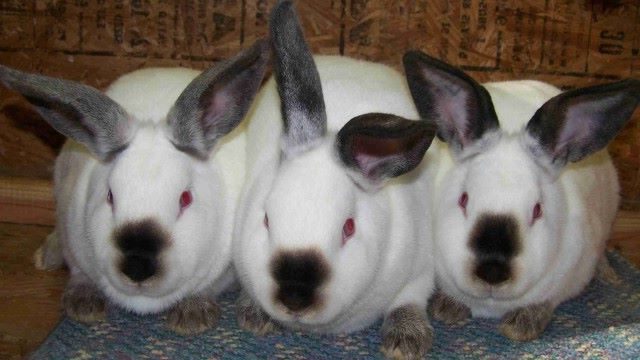 The Californian rabbit has been a favorite among homesteaders and others looking to supply their own meat with minimal space and resources. They’re ideal for small backyards and are easy to care for.

Here’s what to know to get started raising Californian rabbits for meat, breeding, or as pets.

The California rabbit is one of the most popular breeds used for meat. It’s right up there with the New Zealand White, both beloved specifically for their high meat-to-bone ratios.

It is considered to be a medium-sized breed. They are a quick breeding source making them popular in backyard farms.

They reproduce and grow relatively quickly in their 5 – 10 year lifespan. Therefore, your return-on-investment (ROI) is sure to be substantial if you choose to breed them for yourself as meat rabbits or to sell. They reach sexual maturity in 6 – 7 months.

They typically reach butcher weight or fryer weight in 10 weeks. This makes them cost-efficient to raise for meat. This breed is popular to raise on a commercial or backyard scale.

People raise them for meat, fur, hides, breeding purposes, exhibition, and as pets.

Californian rabbits typically weigh between eight to 11 pounds when fully grown. Their size is ideal for most families, along with their temperament.

If you intend to butcher it (or have it butchered) for meat, the ideal weight is 4.5 – 5 pounds. Depending on their environment and their stock, this can take from 10 – 16 weeks.

Their docile disposition makes them very easy to raise and handle, which is excellent for those who may be raising meat rabbits for the first time.

Californian rabbits are easy to confuse with the New Zealand White. You can tell a Californian rabbit because they have white fur with black markings on their noses, ears, and tails. The black spots on their feet make them appear as if they are wearing socks.

They can have red eyes like the New Zealand White. The Himalayan gene makes them almost fully albino with the exception of dark patches of fur.

The primary reason why Californian rabbits appear so similar to the New Zealand White is because of their heritage.

This breed was developed back in the 1920’s by a man named George West, who crossbred Himalayan white rabbits with chinchillas for the distinguishing markings now on the Californian’s ears, feet, and nose. They were originally called Cochinelles.

After that, West then bred the Himalayan-chinchilla bunny with a New Zealand White to make the optimal show and meat production size. By 1939, the American Rabbit Breeders Association (ARBA) had accepted the line as an official breed.

When raising rabbits for meat, Californians are one of the best rabbit breeds. They provide an average of 10.5 pounds of meat from their round, robust bodies.

Yet, exactly how much meat will vary between individuals, and further, there are differences in the weight for does and bucks.

Like most rabbits, does are larger than bucks, so you may get more meat from them.

In terms of difficulty, they’re a great beginner bunny for meat producers. As far as domesticated rabbits go, they do very well in confinement. Therefore, if you run a rabbitry and house your bunnies in ventilated cages for extended periods, this may be an ideal breed for you.

Plus, the Californian Rabbit is a very calm breed. This is more important than you might think. Keep in mind that they can be difficult to handle, though, if they’re being stubborn. So, you should have minimal experience with rabbit handling.

Raising rabbits can be tough. Many new homesteaders underestimate just how hazardous these animals can be. If you mishandle it, those claws can leave some nasty scars. The good news is you won’t have to handle them often.

Make sure you get your rabbits from a reputable breeder to ensure you get that mellow demeanor these rabbits are known for.

There are a few things you need to mark off your checklist before you welcome a Californian rabbit onto your homestead. These factors include shelter, feeding, and additional care.

Californian rabbits do well whether they live indoors or outside, whether in a hutch or wired cage.

In either case, make sure to house each Californian rabbit alone in a minimum 24″ x 30″ wired cage to prevent fighting. These are territorial animals – crowded living quarters may lead to aggression.

Getting a cage set with anywhere from two to six cages is the best way to set up your rabbitry.

Keep in mind that you’ll need additional cages for each of the expected kits to raise them to the optimal slaughter size.

You don’t want to force them to live in close quarters before then. For one, it’s just not kind. Secondly, it’ll stress them out, and happy rabbits are the tastiest.

It’s best to have a wired cage and line it with newspaper. On top of that, add straw. These materials will help absorb urine and feces. When it’s time to clean the cages, it’s easy to bundle up the newspaper and straw and throw it away. Change out the newspaper weekly. Hose off cages a few times a year.

When raising rabbits on a larger scale, you can house them in all-wire cages suspended about the ground for their droppings and urine to fall below.

For females, you’ll need enough space in the cage to place a nesting box for her to kindle (give birth). You can add on a hutch to the back and add some straw or hay.

Another consideration is to pasture them in outdoor pens. Place the pens on the ground so they can harvest their own fresh forage.

So, what to feed your Californian rabbit? It doesn’t need anything fancy in the way of feeding. The main thing you need to prioritize in their dietary regime is to provide protein.

With meat rabbits, this will ensure that their musculature develops well, so you get the most out of your stock. This is important when raising rabbits for meat instead of as a pet.

Experts suggest that rabbit chow is the best feed, both economically and nutritionally. On average, you should be looking for a protein serving of 16-18%. Feed rabbits high-quality commercial feed, and they won’t need a salt lick.

Standards for how much to feed your rabbit may differ, but about ¼ cup of pellets per five pounds of its body weight will do.

Other foods you can give your rabbits include:

Regarding leafy greens and root vegetables, be sure they are fresh. If you wouldn’t eat it, don’t feed it to your rabbits. In addition, greens should not account for more than 10 – 15% of their diet.

It’s incredibly easy for a rabbit to dehydrate and die. Provide a small water bowl and change out the water daily. They need fresh water.

In hot climates, be sure to take extra care. The cage should be in the shade, with plenty of water and ventilation.

No matter where you live and the climate, when raising Californian rabbits outdoors, keep them out of the elements. Protect them from sun, rain, sleet and snow. In cold temperatures, provide them with additional straw for warmth.

This will help keep your stock as healthy as possible for the best meat production outcome.

When it is time to butcher, withhold food for about 24 hours beforehand to keep the mess to a minimum.

If you’re raising a Californian rabbit as a pet, you’ll need to trim its nails. You can take it to the vet who can do it the first time and show you the proper length. Their nails (some people call them claws) will continue to grow and will need maintenance.

It’s easy to breed Californian rabbits when they reach sexual maturity in 42 to 49 weeks. They are prolific producers like many other rabbit breeds.

The number of rabbits that make up your breeding stock will differ, depending on your family’s eating habits. Some estimates say that a family of four can easily sustain themselves on six does. That’s enough to produce a minimum of 48 kits annually for about one rabbit meal weekly.

In any case, the gestation period is quick. Your doe will likely kindle roughly 28 – 32 days after you breed her. If you go with the 6-doe setup, then you’ll only need one buck, as male rabbits can breed with 10 – 15 does each.

They grow rapidly, and luckily, how long to slaughter weight you have to wait is pretty consistent.

Normally, the Californian meat rabbit will reach the perfect fryer weight (4 – 5 lbs) in as little as two to three months.

They make great pets, however, they don’t always like to be held. They are easy to care for and typically have easy-going demeanors. Be sure to keep their nails trimmed to minimize scratching. You can raise them outdoors or indoors.

What are Californian rabbits used for?

People raise this rabbit breed for meat, to breed, and as pets. You can also raise them for their fur. They reach fryer weight quickly and breed easily. They have a good ROI for the time and money you will spend raising them.

How much do Californian rabbits cost?

You can find them for $40 – 50 on average if you want to raise as a pet. If you want them for meat and to breed (to sell or to keep up with a steady supply of meat for your family) you should get them from a breeder. These can be $65 – $80 each.

Their temperaments are calm and relaxed. Be sure to allow enough space in their cages to keep them happy and to minimize stress. Keep them hydrated and well-fed. Provide a good shelter for them. They will be easy to handle.

What is the lifespan of a Californian rabbit?

When bred in good conditions, they will live 5 – 10 years.

Rabbits are some of the most rewarding animals to raise for meat production. It’s a good idea to get started with a Californian rabbit, as their docile nature and high meat-to-bone ratio will make them a worthwhile investment. They will provide a reliable source of meat.

If you’re looking to get into a back-to-basics lifestyle and supply your own meat, this breed is a easy to raise and one to consider.

They are one of the easiest and best farm animals to raise, especially if you are just starting out.