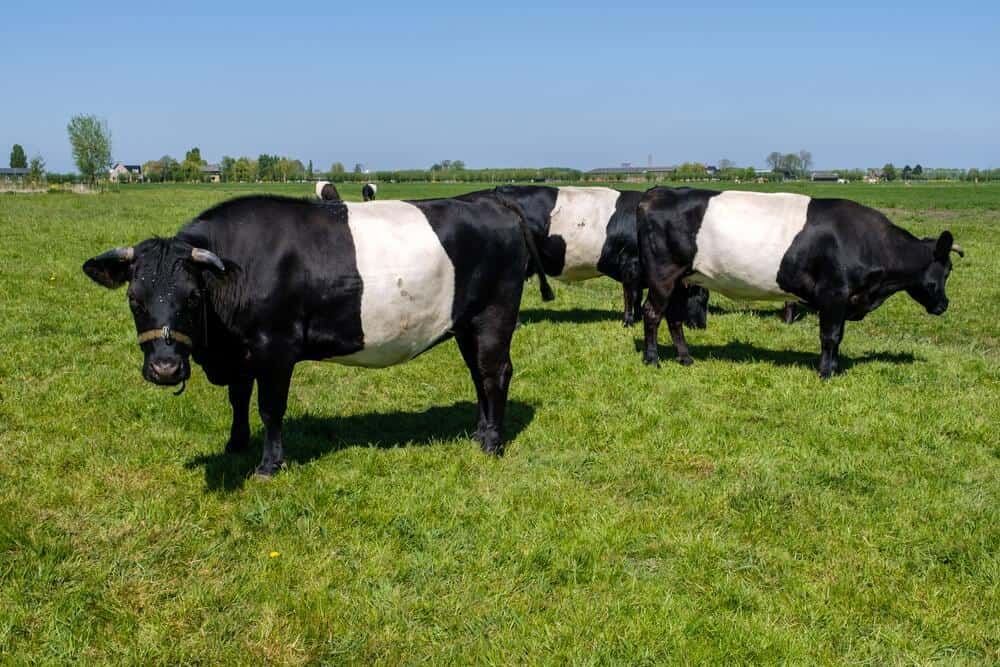 Also known as Dutch Belted cattle, Lakenvelder cattle are a highly-prized breed of cattle raised mainly for its milk production but can also double as a dual-purpose breed for meat.

Lakenvelder cattle are believed to be the only belted cattle breed that traces directly back to the original canvassed or belted cattle described in Switzerland and Austria.

This is a majestic creature that has a rich history of nobility. It’s well sought after today, and the American Livestock Breeds Conservancy has it listed as one of the critically rare breeds of cattle or livestock in North America and the world over. Fewer than 200 cows and Dutch Belted bulls are registered in the US.

If you are in the market for a rare breed of cattle that is not only a prolific milk producer but also doubles as a beef producer, you might want to give Lakenvelder cattle a second look. Here are some fun facts and everything you need to know about Lakenvelder cows, heifers, and bulls.

Origin and History of Lakenvelder Cattle

Even though the origins of the Lakenvelder aren’t exactly known, they have existed since the sixteen hundreds. These cattle have existed as a pure breed, mostly raised by Dutch nobility.

The term lakenvelder is derived from the word laken, meaning a piece of cloth or a sheet around the body. This is in reference to the white band of color that passes around the entire body of the Dutch Belted Cattle. In many countries, belted animals such as Lakenvelder Cattle are called sheeted cattle.

Even though this breed of cow was very popular with the nobles in Holland, their numbers have steadily declined over the years. By the 1930s, their numbers were so low in the Netherlands that the breed’s herd book was closed. A trust was set up in the 1970s to save this breed from extinction.

Exported to the US around 1838, the breed quickly spread to Mexico and Canada, which still has excellent support. It was first exhibited as an extremely rare breed of cattle in a traveling circus by P.T. Barnum. In 1886, a Dutch Belted Cattle Association of America herd book was created.

In terms of characteristics, this breed of cattle is medium-sized, and both the Dutch Belted bulls and the Dutch Belted cows have long horns that tend to be curved upwards. On average, bulls weigh between 900 and 1,500 pounds, while cows tend to weigh around 800 or 900 pounds.

The first and most iconic thing you will notice about Lakenvelder cattle is that they look as though they’re wearing belts. This white sheet or belt of pure white hair goes around the animal through its midriff. They are similar in appearance to Belted Galloway cattle which are also referred to as Belties.

The belt extends from the shoulders to the hip bones and often completely encircles the animal. Other than that, the rest of the animal is often black in color or, in some rare cases, red.

Originally, these cows were horned and primarily bred for dairy production. They are so prolific at milk production that they compare to the Holstein or Brown Swiss in terms of yield.

These cows have a rather friendly disposition and unusual longevity and fertility compared to other cattle breeds.

One of the main reasons the Lakenvelder cattle breed is so rare and in decline is because it has been crossbred with many other different breeds. In the past, the Dutch nobility ensured that only pure breeds existed. Belted animals existed across different species, including Dutch rabbits and even sheep.

The Dutch belted breed has slowly faded due to this crossbreeding. That being said, the Lakenvelder cattle have great mothering instincts and produce a lot of milk for their young. The Dutch belted bull is an excellent breeder—another reason it’s mostly used in crossbreeding—and the perfect beef cattle.

A Dutch belted calf is often very healthy and playful. The heifers tend to breed early and, with good management, can produce a calf every year.

In their natural habitat, these cattle can be considered one of the best heritage livestock breeds.

There are several good reasons you would want to raise Lakenvelder cattle. These include:

One of the biggest issues with the Lakenvelder cattle is that they are not as hardy as most other cows and only thrive in their native climate or something close to it.

The Lakenvelder is a wonderful breed of cattle to keep. Unfortunately, its existence is under immense threat, mostly because of crossbreeding. That makes this one of the most prestigious cow breeds today. Not only because few of them exist but also because they are excellent at meat and milk production.

Learn more about raising cattle. Depending on the amount of pasture and land you have, you may want to consider miniature cattle breeds. There are many breeds of mini milking cows which may be more manageable for small farms and homesteads.

How many Lakenvelder cows and bulls exist in the world today?

Lakenvelder cattle numbers are on a critical decline. Only around 1,000 animals exist worldwide and around 200 in the US today.

Are Lakenvelder cattle easy to raise?

Like most cattle, this breed can forage and survive on pasture. They do, however, need close care from the vet from time to time.

What are the main uses of Lakenvelder cattle?

The Lakenvelder cattle breed is a dairy breed of cattle. However, they double as excellent beef cattle, especially the bulls.

What is a black cow with a white stripe around the middle?

Belted Galloway also called Belties are one breed of black cow with a white stripe around the middle. Another breed is the Lakenvelder which are also called Dutch Belted. Lakenvelders are dairy cattle while Belted Galloways are beef cattle.
Subscribe to our mailing list:
Your information will *never* be shared or sold to a 3rd party.