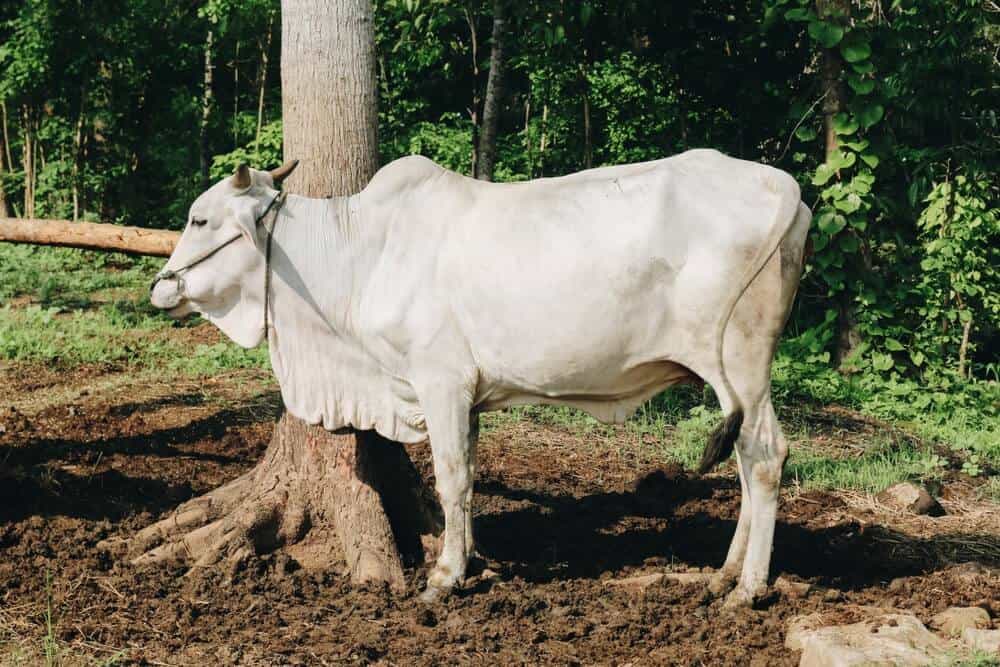 There are few beef cattle breeds so resilient and disease-resistant as Ongole cattle. This hardy breed is mostly found in India and comes from the Ongole region. It’s also often referred to as the Nellore breed. That’s mostly because Ongole Taluk is a division of a district once part of the Nellore district. It is, however, now part of the Guntur district, a part of Andhra Pradesh.

Ongole cattle are so popular in India that their breeding tract spans most of the country. From East Godavari in Andhra Pradesh to Guntur, Nellore, Ongole, and the Kurnool districts. It’s also found in the coastal Vizianagaram region.

There are several good reasons why this breed of cattle is popular, not only in India but worldwide. Some of its key traits include:

The Ongole breed of cattle has been widely exported across the globe for several purposes. It was taken to:

This breed of cattle has contributed to the development of some of the most sought-after breeds in the world, such as the American Brahman bull and the famous Santa Gertrudis.

If you are in the market for a cattle breed that is not only dual-purpose (good for both beef and milk production) but also quite easy to breed and raise, then the Ongole cattle might be what you need. Read on to learn more about this hardy breed.

The Ongole cattle have been around India for quite a while, but it was not until the Ongole cattle show of 1858 that the Nellore district collector encouraged high-quality breeding of the cows.

This event was held annually until 1867 and was a wonderful step forward in encouraging the breed’s progression. Apart from these shows, the government made positive progress in 1867. It laid down the principle that its uncultivated lands needed to have a section set aside for grazing.

The shows were eventually revived in 1981. Subsequently, an Indian Ongole Cattle Breeders’ Association was formed to maintain the breed.

It is claimed that some of the finest specimens of Ongole cattle can be found between the Alluru and Gundalakama rivers in the Kandukur and Ongole taluks. They can also be found in the villages of Nidamanur, Jayavaram, Karumanchi, and Karvadi along the Musi River.

The Ongole cattle are gray-white cows that typically have a gray or white color with stumpy horns or rearward facing horns and a skull that resembles a casket. The cow is quite similar to the Gaolao breed found in the Madhya Pradesh region and the Bhagnari cattle, mostly found in the north of India.

Ongole cattle are rather large animals with loosely knit frames, large dewlaps, and pendulous sheaths. They have long, muscular limbs, short necks, and long bodies. The eyes tend to be elliptical in shape, the foreheads are broad, and they have black eyelashes with a black ring around the eyes.

Being large animals, Ongole bulls tend to be quite heavy, with their weight going well past the 1,000-pound mark. Though not quite as heavy, Ongole cows weigh considerably more than most other cow breeds. Their weight ranges between 950 and 1,000 pounds.

Besides being very large animals, the Ongole cattle are also very strong. This makes them quite suitable for heavy workloads. Traditionally, bulls were used as working animals and mostly plowed the fields.

Some of the strongest and biggest bulls were used for bullfighting competitions when they weren’t plowing the fields. In fact, in Mexico, bulls are mostly used for traditional bullfights.

Being a hardy cattle breed, Ongole cows and bulls are prolific breeders. In fact, in India, traditionally, a Brahmini bull was dedicated to covering the village herd to ensure that there was no inferior inbreeding. This bull was often selected at birth, and the farmers ensured it was branded and celebrated as the village breeding bull or stud.

The cows are also quite fertile and can give birth to a calf yearly. They have great mothering instincts and produce adequate milk for both the calf and the farmer.

Why You Should Keep Ongole Cattle

There are several good reasons why you should consider keeping Ongole cattle. These include:

Regarding animal husbandry, the Ongole bulls are prolific breeders in great demand. Crossbreeding is quite common, although the breed has been well-maintained in India and most parts of the world.

Do Ongole cattle have any health concerns?

Like most hardy cow breeds, Ongole cattle don’t have many health concerns. However, it’s not uncommon for the Nellore breed or this Nellore cattle to suffer from mad cow disease. One of the biggest advantages of this breed is that it can survive almost anywhere, and frequent visits by the vet will ensure that you have a healthy herd.

Is the Ongole Cattle breed an Indian breed?

Yes, the Nellore, or the indigenous Ongole cattle breed, originated from India and is named after the specific region (Ongole).

From India to the world, the Ongole cattle are hardy, easy to keep and excellent at milk and meat production. If you have been looking for a hardy breed of cattle that can survive almost any weather, you might want to consider this spectacularly strong breed.

Consider raising other beef cattle such as the Limouisn cattle along with Ongole for a sustainable meat supply. If you are raising beef cattle, consider protein tubs for cattle to supplement when forage quality declines.

Learn more about raising cattle. Depending on the amount of pasture and land you have, you may want to consider miniature cattle breeds for beef and/or dairy. There are many breeds of mini milking cows which may be more manageable for small farms and homesteads.