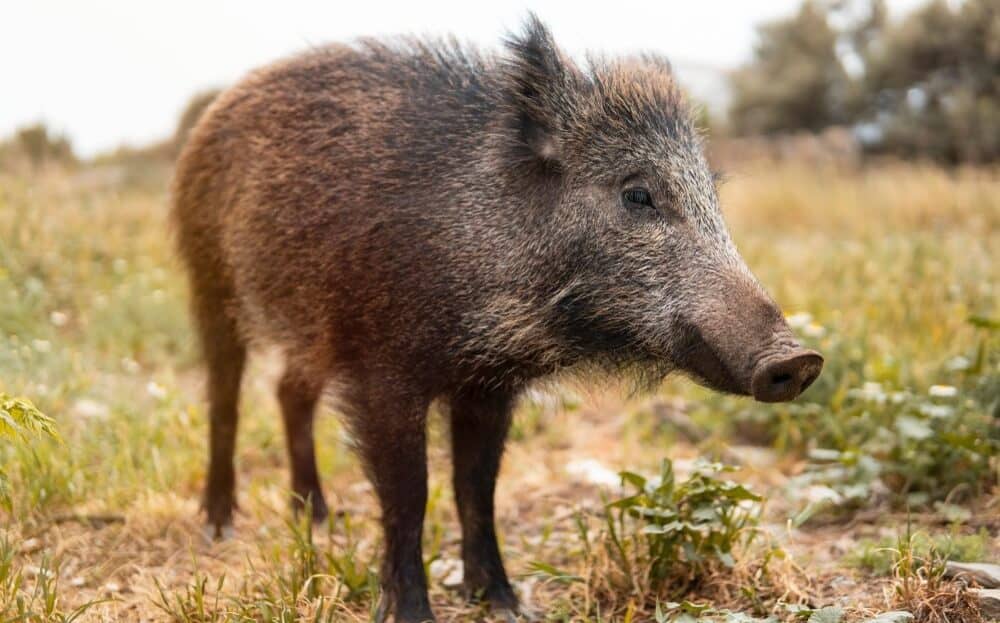 These are extremely hardy pigs that are descendants of feral hogs. Even though it’s smaller than most pig breeds, such as the Idaho Pasture pigs, they are quite tenacious and provide delicious, lean pork.

If you are in the market for a heritage pig breed that’s hardy and small-sized, then you might want to give the Ossabaw pig a second look. Let’s take a quick look at how this pig breed came to be, some of its characteristics, and why keeping them on your farm might be a good idea.

The Origin and History of Ossabaw Pigs

When Spanish conquistadors and explorers reached new lands, they used to leave a host of animals such as pigs, goats, and sheep in those new lands. They would sail away to explore other destinations, knowing they would have food on the new land when they returned.

This is how Ossabaw pigs came to be on Ossabow Island. Left there by Spanish explorers in the 16th century, feral swine ran amok on the island until settlers domesticated a few of them and formed a breeding population.

These hogs are the descendants of the original feral swine left on the island by explorers in the 16th century. However, since the breed isn’t commercially farmed in the United States, the Ossabaw pig is critically endangered. This also means that few studies on the breed are available to the public. Ossabow Island is now run as a preserve by the Georgia Department of Natural Resources (DNR).

But it wasn’t always that way. In the 1960s and 1970s, Ossabow Island was run by a foundation known as The Ossabaw Foundation, founded by Clifford B. West and Sandy West. They used their Ossabaw Island Project to transform the island into a retreat where scientists and artists could work in peace and quiet. Among the most famous people who visited and worked on the island at the time were:

These kinds of projects and initiatives helped to preserve the Ossabaw Island hog breed and kept it from going extinct. Thankfully, the demand for Ossabaw hogs is growing, and places such as Mount Vernon and George Washington’s estate are doing their best to keep up with the demand and provide sanctuary for these rare island hogs.

It should be noted that pigs aren’t exactly native to North America and that the original feral pigs released on Ossabow Island by Spanish explorers aren’t necessarily the only breed to have sired the Ossabow Island pig. Over the centuries, more and more pigs were released into the wild on the island.

These different breeds are believed to have crossbred and formed the Ossabow pig as we know it today. DNA analysis has since proven that most of the Ossabow pig’s heritage comes from pig breeds found on the Canary Islands.

The Appearance and Characteristics of the Ossabaw Island Hog

The Ossabaw Island hog is an almost miniature pig that comes much smaller than typical feral hogs. On the island, a herd can come in various colors, including black. The hog typically has a thick coat, upright ears, and a long snout.

They have a century-old look closely resembling the hogs that the Spaniards first introduced in the 16th century. This specific look is one of the main reasons places like Colonial Williamsburg and Mount Vernon Historic Sites are interested in keeping this breed alive.

The Ossabaw pig tends to be quite small, with mature hogs coming in at less than 20 inches tall and weighing just under 200 pounds. Pigs that have been kept off the island tend to grow bigger. These pigs are excellent foragers, making them ideal as pasture or feeder pigs.

The Ossabow swine is a prolific breeder, with the sows capable of breeding at only six months of age. They tend to have a gestation period of about four months, 115 days. The sows can produce two litters yearly, and the average litter has between 8 and 12 piglets.

There are many reasons why you should consider keeping Ossabaw pigs. Here are some of the most notable ones.

There are many good reasons raising this Spanish pig is a good idea. The simple fact that it’s a rare breed that is not only tenacious but also quite hardy means that they aren’t that problematic in terms of care. They are also quite delicious and can reproduce at an incredible rate.

Is the Ossabow pig friendly?

Yes, the Ossabow pig is quite friendly and has an even-keeled temperament. This makes them ideal for farms with children.

Does the Ossabow pig have any health concerns?

Yes, the Ossabow pig has a few health concerns. One of their main adaptation traits is that they can store an incredible amount of fat when there’s plenty to see them through lean times. The pig tends to gorge itself when food is readily available. As a farmer, you must constantly monitor the breed’s feed intake to prevent obesity and other conditions.

Can I buy a heritage-breed pig like the Ossabow hog?

Buying some heritage breed pigs is highly encouraged to ensure continuity of the specific breed.