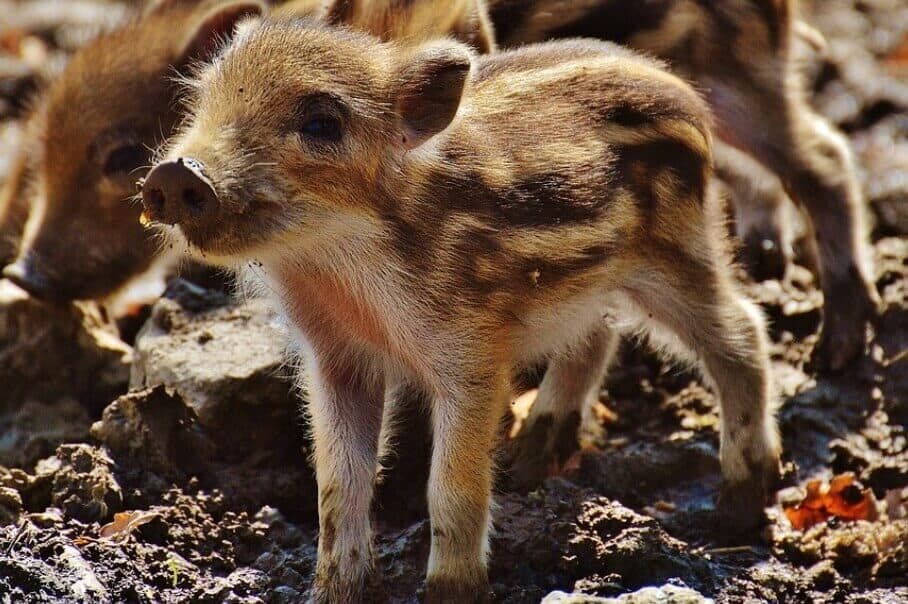 Paris Hilton once made headlines for ordering a Royal Dandle miniature pig which cost her an astounding $4,500 at the time. While most breeds of small pigs aren’t that expensive, they have gained a surge in popularity lately, making them quite valuable. Like Paris Hilton, most people who own tiny pigs keep them as pets as opposed to farm animals bred for their meat or pork.

So, what’s this obsession with small pigs, and what are some of the smallest breeds out there?

About Small Breeds of Pigs

Small breeds of pigs go by several names, including:

Whatever you might want to call them, these breeds of adorable little pigs have become quite popular in many households, with the owners choosing to own them as pets. The thing about these pigs is that they aren’t exactly a specific breed of pig but can be a wide variety of breeds that have been crossbred over the years to maintain their smaller size.

There are, however, several well-known breeds that are referred to as miniature pigs. These include:

These are just a few miniature pig breeds, even though some are usually much bigger than you imagine.

What’s the Smallest Pig Breed You Can Own?

If you are particular about owning the smallest pig breed, you should know several small pig breeds are available at your disposal. However, the smallest domestic pig you can own is often the Gottingen mini pig, which, as we have already reiterated, is slightly bigger than you might imagine. It’s still, however, not as big as your typical domesticated pig like the Chester White.

These tiny, adorable pigs were first bred by scientists in Germany in the 1960s. The idea was to create a pig breed that is not only small and easy to handle, but that could also help with medical research.

As a result, the scientists crossbred the Vietnamese potbelly pig, the Minnesota mini pigs, and the German Landrace pigs. Somewhere down the line, these pigs began being sold as pets.

There are several reasons why this particular pig breed is popular as a miniature pig:

This particular pig breed sits squarely within the true mini pig range. For the most part, pigs that never grow past the 350-pound mark are considered miniature pigs. As you can see, the size and weight of these pigs can vary greatly.

Here’s a chart showing how most other popular mini pigs stack up against the Gottingen mini pig in terms of weight.

There’s no doubt that miniature pigs are fun, cute, and adorable. The fact that they come in a wide variety of breeds makes them even more interesting. However, it’s important to remember that mini pigs aren’t like most commercial pigs—they aren’t like the large black or the large white pigs that can be sold off for their pork.

If you are going to own a mini pig, chances are you will own it as a pet, which comes with additional responsibilities. While these pigs are smaller than most meat pig breeds, they will grow much larger than when they are piglets and require a lot of care. Young pigs should be fed a youth mini-pig feed until they reach around two years of age.

How Big Can Mini Pigs Get?

This depends on the particular breed. As mentioned, for it to be considered a mini pig breed, it shouldn’t be able to grow past the 350-pound mark.

Unfortunately, thanks to the rise in popularity (mostly thanks to many celebrities owning mini pigs), marketing companies have come up with a host of advertisement slogans that can be misleading.

Terms such as “teacup pig” or “mini pig” often lead some unsuspecting buyers to believe that these pigs are smaller than they are in real life.

Yes, of course, when you buy them as piglets at first, they will be tiny and adorable, but they won’t stay that way forever. As they get older, they get bigger, and depending on what you feed them, they could get much bigger than advertised.

While they may never be as big as other domesticated or feral pigs, they may still get bigger than you initially expected.

It’s therefore important to clarify the actual final size of the pig with the breeder before you buy it. If you find that you may not be capable of having such a big animal in your home as a pet, it might be a good idea to get a different breed of miniature pig.

How Much Do Mini Pigs Cost?

This will depend on several factors. Paris Hilton paid $4,500 for hers, but that pricing isn’t usual. Mostly, you can adopt pet pigs from shelters where you can pay as little as $250 or buy one from breeders who may charge as much as they wish, depending on the breed in question.

Other expenses you will need to consider include veterinary care, parasite treatments, injuries, food, shelter, etc.

You should expect to spend some money as your pig grows. It will probably end up costing you a few thousand dollars.

You will have to provide your pet pig with regular veterinary care. It’s a pet just like any other pet and will need a few regular check-ups and maybe some vaccinations. If you have a male pet pig, you will need to have it neutered early since pigs can get sexually active within the first three months of their lives.

If you are interested in owning one of these adorable miniature pigs, here are some frequently asked questions that might help illuminate the path for you.

Is it legal to own a mini pig?

Yes, for the most part, it’s legal to own a mini pig. However, clarifying this matter with your city or building manager is important. In some cities, it’s illegal to own animals within the city limits, just as some buildings don’t allow pets.

Will miniature pigs get along with other pets in the home?

If you are a pet lover, there’s a good chance that you will have more than one type of pet in your home. If you introduce your pet pig into this environment, it’s important to know whether or not it will get along with any other pets you may have there already.

For the most part, pigs get along great with cats. However, it’s difficult to predict how that combination will work if you are a dog person. Depending on your breed of dog, it might end up bullying your pig, or your pig might end up being uncomfortable around the dog. This is because pigs are natural prey animals while dogs are natural predators.

Should you neuter your miniature pig?

No matter how small they may be, male animals tend to get bigger and more aggressive, especially during mating season. This is as true with miniature pigs as it is with any other male animal.

As such, you should consider neutering your boars as early as possible. Thankfully, this procedure isn’t that complicated and often not that expensive as long as you do it through a qualified vet.

Even though your house isn’t really going to smell like a pigsty, it’s important to realize that pig manure does have a distinctively strong odor. Even though pigs are generally very clean (contrary to common belief), their manure does stink, and you should expect some strong odor if you have a pet pig. Thankfully, this is something you can remedy by immediately cleaning up after your mini pig.