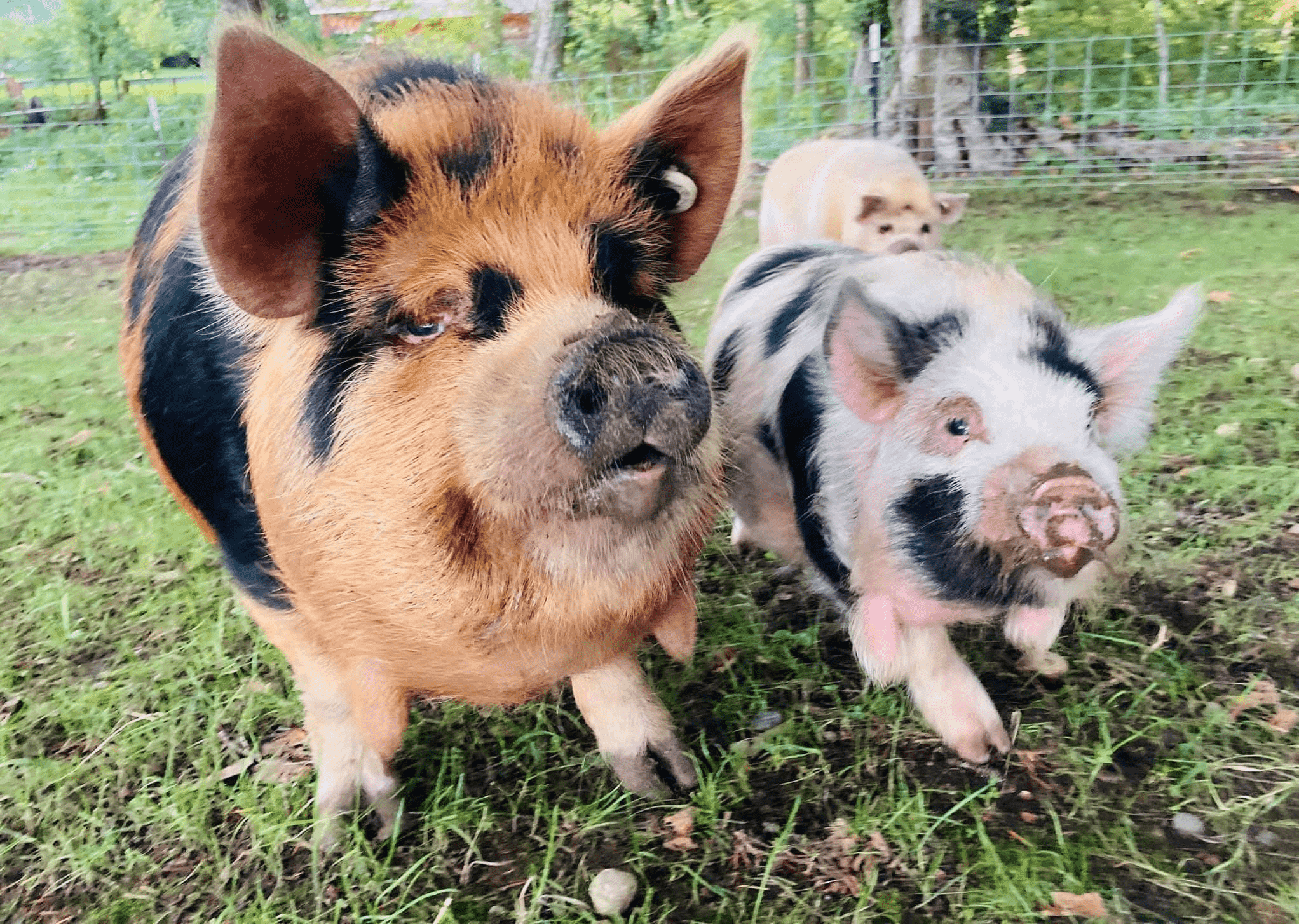 The funny looking pig with a funny sounding name, Kunekune pigs are a great choice for smaller homestead operations. These pigs provide high quality meat in smaller quantities and are easier on the fields because they root less than other breeds. In addition, Kunekune pigs are grazing pigs and need less grain to grow to market weight.

You may want to consider Kunekunes if you are interested in raising meat pigs or just starting out with livestock. They are great starter pigs for those interested in beginning homesteading. Learn about raising Kunekunes for meat, breeding, requirements for raising, appearance, and how long they take to grow before reaching market weight.

In addition to helping with pasture management, Kunekune pigs are popular in non-farming circles as pets. These pigs have oodles of personality. They are friendly, calm, and curious. They are very smart and always want to see what the humans are up to. The Kunekune pig is also very easy to handle, especially if you have established a good relationship with them.

While a Kunekune pig is still a pig, this breed is less likely to root than some other breeds. They do root a bit, but mostly they graze. Their upturned noses mean that Kunekune pigs are better suited for grazing than rooting. Because they root less, Kunekunes are not as hard on fields and fences as other breeds.

Kunekune pigs are generally smaller than many other kinds of pigs. This means that they require smaller pens and shelters than some other breeds. If you want to raise a little meat for your family, but you don’t eat tons of pork, Kunekune might be the perfect choice. Additionally, smaller families might find the Kunekune to be a great fit.

If you have a small piece of property and want a pig that the neighbors will find less objectionable, the Kunekune may be a good choice. These pigs are less smelly than some other pigs, and they need less space.

Kunekune pork is drastically different from the pork that you find in stores. The meat is dark red and richly marbled, leading to moist and tender meat. Many times the chops and pork steaks resemble beef more than pork. The meat has a sweet flavor due to the grass based diet of the Kunekune.

The muscle of the meat itself is surrounded by a generous layer of fat. This fat gives great flavor to sausages, bacon, and other kinds of meat. The fat also helps seal in moisture and flavor when the meat is cooked.

Also, Kunekune hogs make great lard. The lard can be used in cooking and baking. Some homesteaders use it for making soap.

Because Kunekune pigs are such great grazers, they are a great choice for homestead pigs. While many breeders do give their young pigs a bit of grain during their growing years, it is a relatively small amount, like 2 cups per day per pig.

Of course, the need for grain depends on the quality of your pastures. At certain times of the year, the pastures may not provide adequate protein for the pigs. This is the time when you will need to supplement with a bit of grain. Alternatively, you can feed them rich alfalfa hay to provide for their protein needs.

Do not try to fatten your Kunekune pigs like you would other breeds of pigs. When fed a diet that is mainly grain, they will get overly fat. They will secrete this fat subcutaneously and not gain muscle.

Another thing to remember is that these pigs are very social critters. You should never keep a single pig. Buy at least two Kunekune pigs, so they will be happier and better behaved.

One thing to keep in mind is that Kunekune pigs are slow growing. It will take them about 2 years to reach slaughter weight. To experience the wonder of Kunekune pork, you must be patient. However, in the meantime, you will enjoy their interesting, friendly personalities. If making money off of your pigs is important, you may want to choose another breed. Their slow growth rate means that they will not pay off if you’re selling them for pork.

Kunekune hogs do not require tons of work. Simply making sure they have enough grass or hay to eat, have fresh water, and are healthy are the daily chores. Most of the time, your morning pig chores can be completed in 15 to 20 minutes a day.

Are Kune Kune Pigs Right for You?

Some things to consider before raising Kunekune pigs and other pigs — and any livestock for meat — are:

Kunekune pigs need about a quarter acre of pasture per adult pig. This means that you can have four or five pigs per acre. Rotating pastures will keep the pigs from overgrazing the fields. The pigs will be more likely to root and test fences if their fields are overgrazed. Foraging keeps the pigs happy and intellectually stimulated.

Kunekune pigs behave much like other pigs. They do need tight, well-made fencing. You may want to use electric fencing to keep the pigs from escaping your fields.

Kunekune swine will need shelter in winter weather. If your pigs will not have access to the outdoors, you should provide 50 to 80 square feet per pig in the barn. For indoor pigs, having a barn free of drafts will help the pigs stay healthy and warm. If the weather is moderate, your Kunekune hogs can get away with smaller quarters and outdoor access.

Kunekune pigs need shade in the hot parts of the year. They can enjoy life in any climate as long as they have proper shelter for the climate. And of course, they will enjoy wallowing in mud which helps keep them cool. Learn why do pigs like mud.

Kunekune sows come in heat every 18 to 22 days until bred. A sow will be receptive to the boar for 8 to 48 hours. Kunekune pigs are pregnant on average for about 116 days. Keep track of your sow’s estimated farrowing day and put her in a safe area about a week before she is due to give birth. Her farrowing pen should be dry and warm. A heat lamp will be helpful if it is chilly or cold outside. Provide plenty of bedding for the sow. She will begin nesting to create an area where she will give birth. How long are pigs pregnant

On average Kunekune sows have 8 to 10 piglets. Sometimes, they will have as many as 12 piglets. Most farrowings go well. Kunekune sows seldom need assistance. Kunekune sows are wonderful mothers. Unless you have overfed your sow, and she’s excessively fat, she will seldom lay on her piglets and crush them.

Weaning should take place between 8 and 10 weeks of age. Once the piglets and mother pig are fighting over the food, the piglets can be removed to ensure that they get adequate feed. When you have removed the piglets, reduce the sow’s feed ration to keep her from getting overly fat. She will come in heat again within 7 to 14 days of when you wean the piglets.

If you live in an area with warm temperatures, you may be able to get two litters of piglets from each sow. However, if you live in a place with cold, long winters, you will either need to provide indoor housing and heating for sows and piglets, or keep the boar separated from the sows to prevent farrowing when it is too cold outside. Piglets are very sensitive to the cold and will die if they are not kept warm enough.

Characteristics to Consider When Breeding

There are certain characteristics to consider. The ideal breeding gilt has the following attributes:

The American Kunekune Breeders’ Association says that because they are smaller in size and have a gentle demeanor that they would also be good to use as a truffle pig.

Breeders combined Kunekunes, Durocs and Berkshire pigs to create a new pig breed called Idaho Pasture pigs. These have the smaller, shorter snouts like Kunekunes and were made so they could graze rather than root up pasture.

Kunekune pigs are exactly as their name is translated. In Maori, the word Kunekune means “fat and round.” These pigs are similar in shape and size to potbellied pigs. However, the Kunekune has long hair. The hair can be smooth and silky, curly, or coarse and rough.

Kunekune pigs have short legs, round bodies, and short upturned snouts. They come in a massive array of colors. You can find them in black, brown, reddish, tan, and gray. They also are spotted.

Kunekune pigs often have wattles under their chins. These are also called tassels. Some Kunekunes have wattles while others do not. There is no rhyme or reason as to why some of this breed have wattles and others don’t.

Kunekune pigs can grow to between 24 and 36 inches tall. They can weigh between 150 and 400 pounds with the males generally being heavier and taller than females.

The ears of the Kunekune pig can be erect or semi erect.

By the 1970s, the Kunekune breed was near extinction in the Pacific Islands. However, two wildlife park owners saved the breed. At this time, exportation of the Kunekune occurred. They are still rare in the United States. However, their numbers are growing.

As far as pig breeds to raise, Kunekunes are a breed to consider if you are able to wait for them to grow. They are slow-growing pigs compared to other breeds. Kunekune meat is worth waiting for if you have the ability to wait. For some homesteads, they may not provide as good an ROI as faster-growing pigs.

Remember to never raise just one Kunekune or other pig. They are social animals. If you want a good meat pig that is a true grazing pig, consider Idaho Pasture pigs. Other pigs to consider raising for meat are: