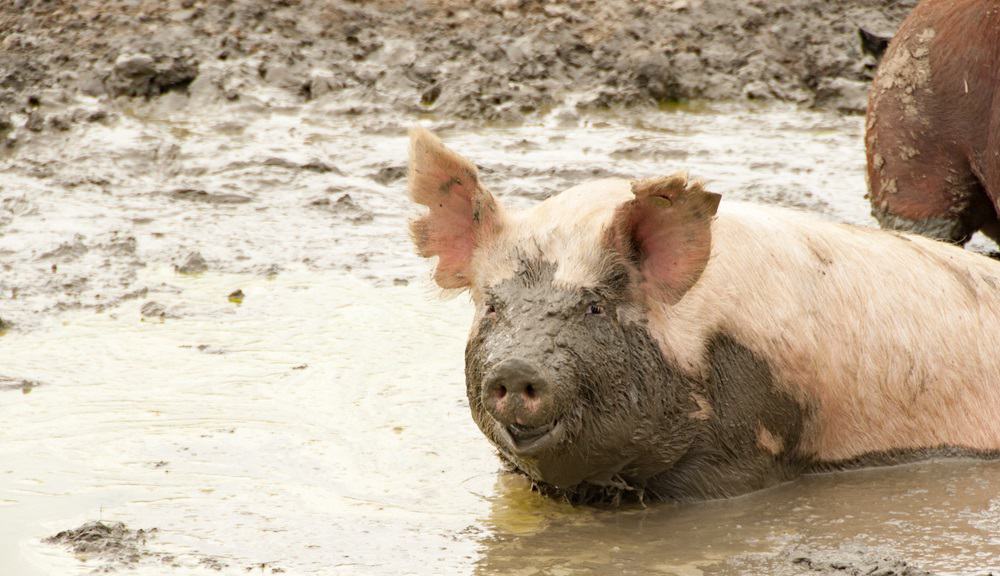 Learn why do pigs like mud. Wallowing in mud is a favorite pastime that cuts across all species of pigs. The adorable oinkers love luxuriating in sludge. If you’ve even seen a pig in mud, you will have seen the porcine joy that comes with wallowing.

Their love for mud is one of the chief reasons several people think pigs are dirty animals, but in reality, they are some of the cleanest animals you can rear on your farm. It is not because they like to be dirty. For pigs, getting muddy is not the same thing as getting dirty but rather is a necessity for their health. So why do pigs like mud?

Mud helps pigs regulate their body temperature and keep cool. Pigs don’t have as much hair on their bodies as other animals to insulate them against extreme weather conditions like the scorching sun or freezing cold. They also have a limited number of sweat glands, many of which aren’t functional sweat glands. This means they can’t sweat to cool down their bodies from their own resources and rely on external coolants like water puddles and mud.

Functional sweat glands secrete perspiration (sweat) when the body temperature gets hot beyond the ideal temperature. The salts and amino acids that make up sweat will evaporate into the air, cooling down the skin.

Pigs cannot dissipate heat like this, and their preferred biothermal response has been to wallow in mud baths over the years. If there is no mud available, they will jump into the closest tub of cool water or roll on wet grass. This situation makes them more tolerant of the cold than the scorching sun; they are susceptible to heat strokes in the absence of cooling facilities.

The mud has the same cooling effect on the pigs’ skins as sweat has on human bodies. Plain water has a similar effect, but mud slows down the pace of water evaporation, extending the longevity of the cooling effect. This, along with a few other biological predispositions, might explain why pigs seem so happy in mud. The frequency of rolling in the mud reduces if their surrounding is cool or shaded.

Some scientists have even theorized that pigs did not evolve functional sweat glands like the rest of the ungulates historically because they got used to wallowing in the mud, which helped them cool down.

Wallowing as a Recreational Activity

Pigs are emotional and social animals that engage in most activities as a unit. Not everything they do has a functional or productive motivation behind it.

Some wallowing is purely for enjoyment, social and recreational purposes. It is the same as opting to go to the beach or take a dip in the pool to cool down instead of taking a cold shower or lying in your private bathtub. You get to have fun and interact with others in the process.

Wallowing in the dirt promotes the pigs’ emotional well-being by calming them naturally, making them feel more grounded and happier. It also provides an avenue for exercise through an enjoyable activity that keeps their lives vibrant.

One might argue that the pigs no longer need mud because they are now sheltered from the sun, and their pens are kept clean and free of parasites. They will still instinctively snuffle in the mud for roots, rodents, small reptiles, and insects despite your generous portions of high-grade pig food. This behavior can be puzzling.

Before domestication, pigs used to forage for food in the dirt. They would still dig up the ground, searching for roots and insects to eat. This instinct is what makes them excellent truffle pigs. Their snouts are adapted to smelling underground food and rooting or digging the earth to get it. Mushrooms, worms, grubs, and other grounded delicacies formed most of their diet. The mud allows them to root with their snouts, and they love it.

The pig’s genes are traceable back to hippos and whales, which are both water dwellers. Some scientists believe that pigs didn’t evolve sweat glands because they were wired to wallow in the mud due to their aquatic ancestry.

Wallowing is not exclusively a pig thing, though. Other animals that wallow in the mud are elephants, rhinos, deer, and bovids like buffalos and bison. The behavior has been hardwired in these animals, and they find it rewarding on its own, even without considering the benefits.

We have looked at why pigs like mud and the benefits that draw them to it. This only captures a fraction of the actual benefits, as a couple of others come by default when the pigs cover themselves up with mud. The pigs may not be aware of them, but they also significantly impact their livelihood.

A pig’s skin is similar to humans in certain ways. They are also susceptible to irritating sunburns on their hides and ears. Like humans, pigs also like to sunbathe, exposing them to UV rays. Spending so much time outdoors makes them susceptible to sunburn.

Fortunately, they roll around in the mud until they are fully caked before finding a suitable spot for sunbathing. The layer of mud that dries on their skin acts as a sunscreen absorbing the UV rays before they can reach the skin and inflict damage.

Parasites and insects are drawn to pigs because there is always plenty of food around them. This can be challenging, especially if they are the kind that clings to the host. They come with disease and discomfort.

A good thick layer of mud on the pig protects it from bites and prevents tiny parasites from attaching themselves. The ones that make it further risk suffocation or getting trapped in the mud as it dries. The pigs will then find a tree or any other rough surface and scrape the mud off along with the bugs. Mud is an effective deterrent from bugs like fleas, lice, or mosquitoes.

Pigs Are Not Dirty

Now that you know the benefits pigs get from mud, you should take the mud out of the equation when assessing their cleanliness. You will discover how much it is underrated.

The fact that they don’t sweat already means they won’t stink even when it’s extremely hot. They also don’t defecate close to where they sleep or feed unless they are crammed in a small space for extended periods. You will be surprised at how clean their skin usually is once the mud is washed off.

Making a Functional Mud Hole for Your Pigs

A large contributor to the pig’s bad hygiene reputation is the practice of cramming many pigs in small, confined spaces. This forces them to let go of their natural cleanliness instinct, making it difficult to clean their living areas and worsening the situation. Confinement in small spaces is also known to increase anxiety, tension, stress, aggression, and even fighting.

A good pig farm has designated spaces for the pigs to sleep, exercise, explore and engage in their normal social behavior to stay healthy. A monotonous environment that lacks stimulation can easily depress them because they love new experiences.

The mud hole should be separated from their sleeping and eating areas. They should have dry areas to sunbathe, eat and sleep. Waterlogged soil can soften the pigs’ feet, making them susceptible to injury and/or infection.

All pig breeds are also affected by the cold, strong wind, or getting rained on. They might suffer from chills, hypothermia, or pneumonia if their environment is constantly wet. Building a proper barn or shed for pigs will be essential.

Perhaps you have heard the phrase: Happy as a pig in mud. Oh, the life! Many pig owners enjoy giving their pigs a day in the mud before they send them to slaughter. One last happy day!

Pigs like mud because it helps them cool down, protects them from insects and the sun. They are wired to enjoy it, and it is a fun activity for them. They also enjoy other benefits that might not feature in their decision to wallow in the mud but actually make their lives better. Denying them mud affects both their physical and emotional wellbeing. Mud doesn’t make them any dirtier than the other animals on your farm.

What do pigs eat

How to breed pigs

Differences between hog vs pig