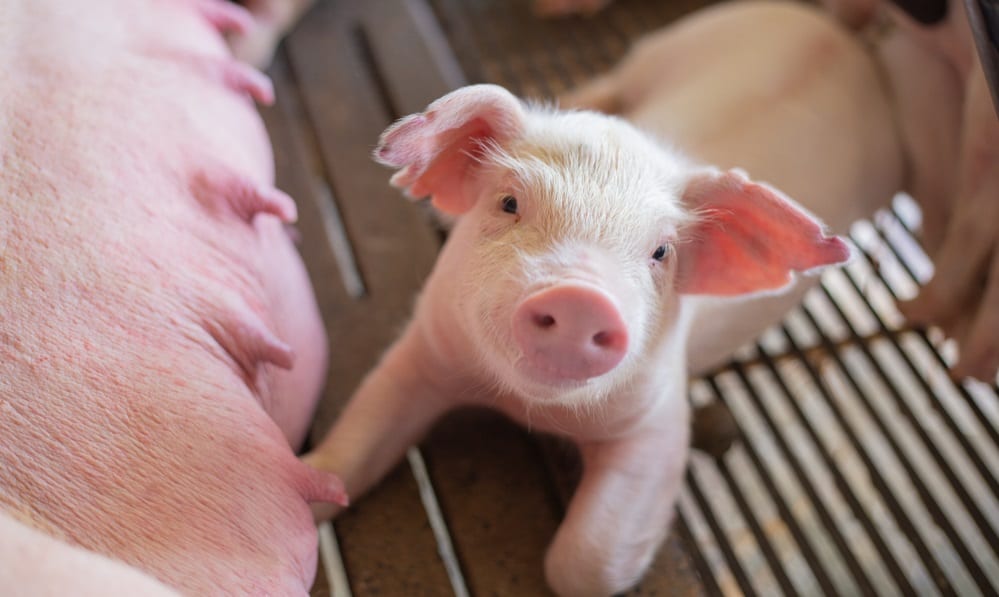 Genetics plays an important role in a pig’s meat quality and overall performance. That’s one of the main reasons commercial and private pig farmers pay close attention to their breeding stock. As a pig producer, learning how to breed pigs is a skill that will go a long way towards improving the caliber of animals on your farm.

While breeding pigs is relatively easy, the trick is in the specifics. The kind of boar you pair with the gilt or sow matters greatly. Whether you are looking to breed pigs on your farm for profit or just learning how to breed them for sheer knowledge and fun, here’s some information that will help.

What Is Pig Breeding?

To understand pig breeding, we must first understand the definition of a breed. A breed is a group of animals with a common ancestry and several distinguishable traits and characteristics.

When a male animal of specific breed mates with a female animal of the same breed, these traits and characteristics are frequently fixed and present in the offspring.

What Is a Pig Mating System?

A pig breeding or mating system is the approach a farmer would take when pairing certain individuals to maintain or incorporate specific desired traits. When it comes to pig mating systems, there are two main types:

Even though strategies such as inbreeding and linebreeding tend to encourage a bit of uniformity and the farmer can often expect a certain level of performance from their herd, it also increases the potential for undesirable genes.

This, in turn, can lead to a gradual but steady decline in the resulting breed’s performance. This is known as inbreeding depression. As a remedy for this, crossbreeding is often encouraged.

How to Breed Pigs

Now that we know about the strategies, let’s take a quick look at the different ways of breeding pigs, depending on your farm setup.

Pen mating is simple. All you have to do is let your boar run wild with the sows in a pen. This method works best if you have a big pig farm with a spacious pen. There are, however, some problems with this approach.

For one thing, you will have to only allow the specific type of sow you want to crossbreed with your boar in the pen. Otherwise, the boar will mate with any sow from any swine breed as long as it’s on heat and within reach.

This method of breeding involves a great deal of supervision on your part. The idea here is to allow the boar to mate with only one sow. As such, you should only introduce the sow to the boar once every 24 hours for the first three days during her estrus cycle. That means you would have to closely monitor her estrus cycle.

The other option is to simply introduce your sow to the boar every day of her estrus cycle until she refuses to be mounted by him. This would typically indicate that she has been successfully bred.

In this case, the frozen semen is artificially introduced to the sow or gilt. Artificial insemination involves a great deal of work on your part:

How to Tell If Your Pig Is Pregnant

The idea behind breeding pigs is to get the sow pregnant with the specific breed you want and have her give birth to a litter of piglets bearing those particular genetic traits. It’s therefore important to know how to look for signs that all this effort was fruitful. Here are some tips on telling if your pig is pregnant.

How Many Piglets Can a Sow Have?

Depending on the pig breed and the reproduction performance of the breeds in question, a sow can have a large litter size of about 8–12 piglets. The saddest part is that most of these babies will probably not reach adulthood, as piglets generally have a mortality rate of around 40%.

This, however, is a matter of management. Done properly, you could raise all your piglets to young pigs and then large adults.

Learn how long are pigs pregnant to get better informed on the overall gestation period of hogs and how to take care of the potential mother pigs in your herd.

Raising pigs, regardless of the breed, be it the American Yorkshire pig, American Guinea hog, Berkshire pigs, or any kind of heritage breed, can be technically challenging. This is particularly true if you are looking to crossbreed them with other native breeds for pork.

However, with the right information and professional help from a breeder or a vet, it should be a fun experience. This guide is a good place to start. Learn about raising various pig breeds on your farm or homestead.

How Long Do Pigs Live