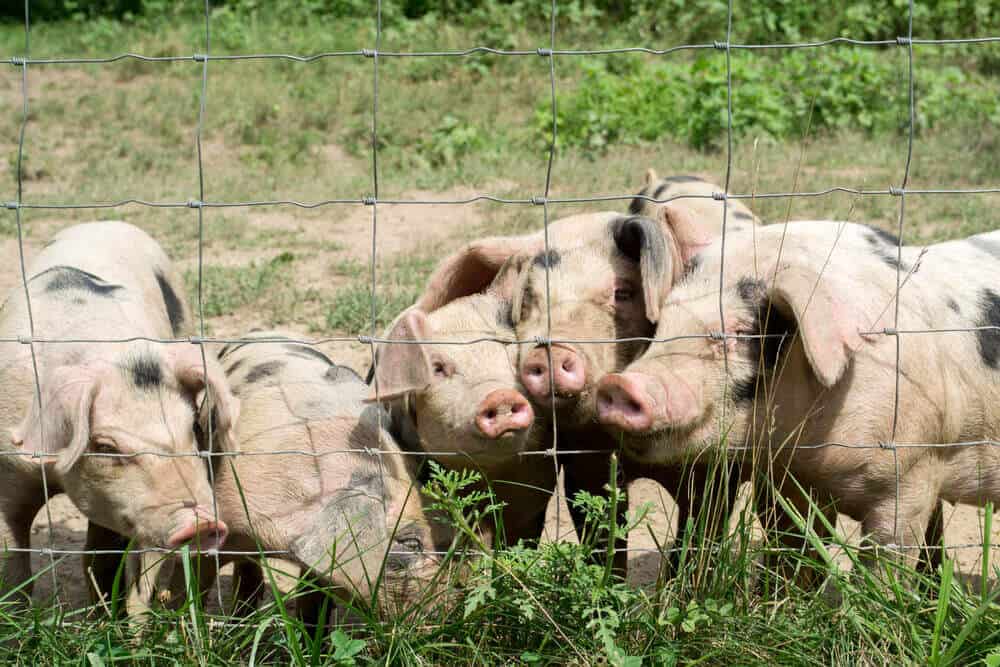 When people think of intensive pig farming, some breeds that come to mind include the Hampshire pig, the Duroc pig, and the Yorkshire pig. However, the Chester White pig is just as wonderful an option for people who want to rear large, fatty pigs for commercial and domestic use. They gain weight quickly and are excellent to raise for meat.

This popular white pig is actively used for domestic and commercial crossbreeding all across the country. The Chester County white pig is versatile, resilient, and great for extensive pig farming purposes because they provide a good ROI.

This Chester white breed pig is a crossbreed of the Yorkshire and Lincolnshire pigs that came from England and landed in New York. These two breeds were intermingled with the Chester breed that was already a native of the Americas.

Sometime in the years between 1815 and 1818, a captain named James Jeffries imported a white boar from England called a Cumberland or Bedfordshire boar. This white boar was used in extensive breeding of the local pig population, and, as a result, the Chester White breed was created.

Why Are Chester White Pigs So Popular

Chester White pigs are genetically ideal for farmers looking to rear pigs for commercial and domestic use. One of the main reasons they are reared in such great numbers is their ability to rapidly gain weight and grow fat.

This pig can gain up to 1.36 pounds within a day. It’s also quite economical to rear as it gains one pound for every three pounds of grain that it eats. A well-fed adult pig can yield between 1,100 and 1,400 pounds of meat.

This pig is also known for its incredible mothering ability. Chester sows have one of the highest conception rates among pigs and will birth many vigorous piglets per litter, which is every breeder’s dream. This can be attributed to the infusion of genetics from crossbreeding.

Chester White pigs’ muscle quality is also world-acclaimed among pig breeders. It provides structural soundness and is responsible for the thick and meaty ham that comes out in the end.

Their meat also has a substantial amount of fat content, which makes it supple and has a savory taste. It is equally enjoyed in domestic and commercial settings

Finally, meat packers are particularly fond of Chester Whites because their white skin is relatively easy to remove in the harvesting process.

There are around two billion Chester White pigs in the world today. This pig is quite intelligent. Like other pigs, it’s omnivorous, liking both meat (other animals) and plants.

The first thing most people notice about the Chester White, apart from its typical massive size, is that it’s all-white at the hair level and has pinkish skin that gets easily sunburnt. The pig has medium-sized ears which tend to fall over its eyes.

One of the most outstanding characteristics of the Chester White is its snout. This is an important tool for the pig as it uses it to find food and smell. Since this pig doesn’t sweat that much, it tends to cover itself in mud to keep its body temperature low.

When it comes to mating, the boar, or male Chester White pig, produces pheromones that attract females, the sows. These pheromones are found in their saliva. When discharged, the female pig uses her snout to seek it out and mate with the potential partner. Another reason why the pig’s snout is one of the most important parts of its body.

An adult Chester White pig has 44 teeth, while the piglets tend to have only 28. These 28 teeth fall out when the pig is 12 months old. This pig’s teeth are a lot like those of humans. They are covered by enamel, which makes the teeth rather strong and helps to keep them free from disease.

Like humans, these pigs chew their food. This can be attributed to their digestive system being highly similar to that of human beings, meaning they can’t digest unchewed food. It needs to be broken down in the mouth first before it can be ingested.

These pigs walk on their fingertips as opposed to their entire paws. It uses two of its middle toes, and the other two are used for balance.

For the most part, Chester White pigs will eat almost anything. Learn what do pigs eat. They are particularly fond of table scraps such as:

In the wild, these pigs also mostly focus on eating what pigs commonly eat:

However, when in confinement, these pigs can be fed various foods such as corn with a slight mixture of vitamins and minerals and soybean meals. These pigs also have quite an appetite for water and can drink up to 14 gallons each day.

These pigs can live for 6 to 10 years. Even though the Chester White is one of the most durable pig breeds, it is prone to diseases related to vitamin C deficiency. These include:

If any of your pigs suffer from these conditions, you will notice that they are lethargic, weak, anorexic, and experiencing many difficulties when moving. These pigs also tend to get diarrhea and develop a rough coat.

Established in 1997, the Pedigreed Certified Pigs Association (CPS) is a body that combines the Chester White, the Spotted Pig, and the Chinese pigs registry into a single centralized organization. The fact that Chester White is part of this list shows you just how important this breed has become to the entire pig farming industry in the country.

Here are some of the benefits of raising and breeding Chester White pigs:

They are social animals like all pigs are. Do not raise just one pig alone. They will benefit from being in a herd, even if it’s small. They enjoy the outdoors and will benefit from having access to fresh air. Provide an area with mud for pigs so they can cool themselves.

When comparing pig breeds, the Chester White pig breed is a resilient, durable, and versatile breed that can grow fast and fat, and it will remain an extremely important part of the pork industry in the future. While the exact number of Chester White pigs in the world isn’t known, this breed is popular with farmers and can be expected to continue multiplying as more and more people realize how lucrative it is to breed them. Consider adding them to your homestead or small hobby farm.

Building a Barn or Shed for Animals