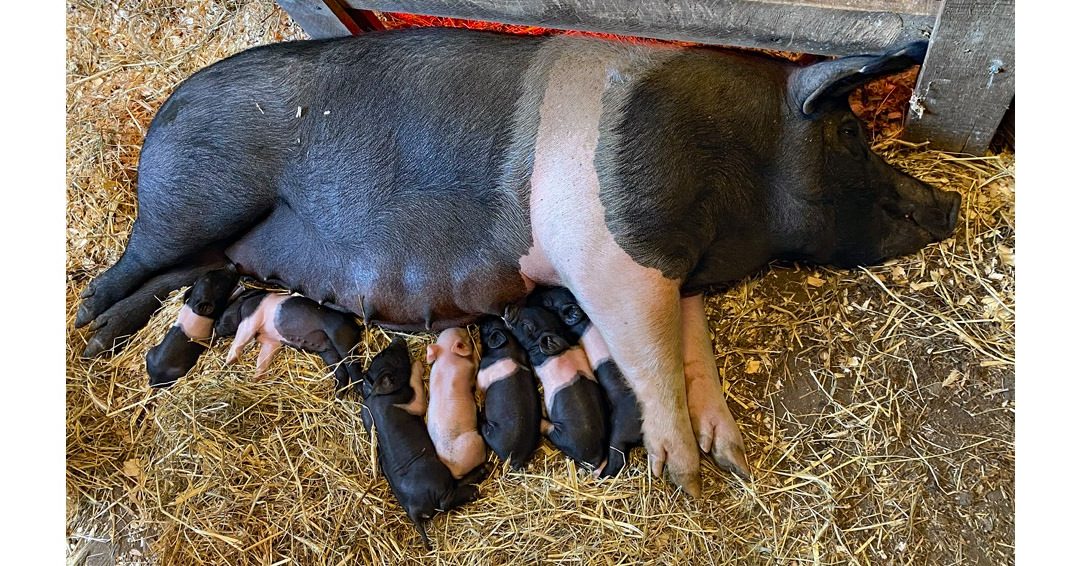 The Hampshire pig is a breed of pig that was first imported from England. It has been bred and raised in the United States since the 19th century and quickly became one of the country’s most prominent breeds.

With a unique appearance and proven durability, the Hampshire has proven itself to be superior to the everyday common hog. Its characteristics speak for themselves.

The primary purpose of breeding and raising Hampshire pigs is for their meat. Their meat is lean and well-textured because of the high muscle-to-fat content. In particular, a Hampshire pig’s back meat is desired for being low in fat.

Because Hampshires have a rapid growth process and ideal characteristics, they are typically preferred for meat. Their body packs a lot of lean, high-quality meat that is loved by many.

This particular breed of hog is known for having excellent breeding capabilities. They can give birth for many years, which is not always the case for other breeds.

Hampshire pigs are also considered beginner-friendly, so they make an excellent option for someone new to the breeding and butchering industry. They are ideal for backyard farms and homesteading.

Hampshire pigs are black and feature a white belt that wraps around their shoulders and their two front feet. They have erect ears, long legs, and long noses.

The Hampshire breed is considered large, as far as hogs go. With significant muscle and lean meat, you can expect the boars to weigh over 600 pounds, with the sows weighing slightly less at about 550 pounds.

Hampshire pigs, like many other pig breeds, are extremely intelligent. They learn quickly, and they retain their wild natural traits. Because of this retention, they do a great job sensing danger. They are always on high alert, keeping an eye out for any predators in the area.

That being said, adult Hampshires can be aggressive at times – especially the males. You must keep them in secure areas. Their behavior can be quite unpredictable, and their size makes it difficult to regain control.

Hampshire hogs are also known for destroying property – another good reason to have a solid fence. They love to run, dig, and forage for food, and they’re good at digging up a good meal.

Free-ranging is the best way to care for these pigs, but they will certainly go after farm produce if they get loose from their fence.

Sows make great mothers to their young. They live long lives and produce many piglets, and their natural maternal instincts allow them to watch over them and care for them effectively.

How to Raise Hampshire Piglets

The Hampshire pig is one of the most common hogs found in pig farming. It’s a great breed for beginners to learn about, but it does come with some specific care instructions. When raising any kind of animal for meat, it’s critical to learn about the steps to do so correctly.

Many Hampshire pig breeders breed Hampshire boars and sows only, to keep the bloodline pure and of high quality. However, some breeders will breed the boar with sows of other breeds to improve their qualities, such as meat quality or skin thickness.

Pigs reach sexual maturity at about seven months, but many breeders wait until they are about one year old to start breeding them. A sow may have anywhere from seven to 15 piglets in its litter. When it comes to how long are Hamphire pigs pregnant, gestation lasts 114 days.

Though Hampshire pigs make excellent foragers, they do well in confinement. A quality home for these pigs will include a solid pigpen, concrete areas, chain link fencing, and livestock panels.

Many farmers recommend using free-ranging Hampshires due to their ability to forage. That being said, movable electric fences are super helpful. If you move them every 15 days or so, they should do great.

Many commercial farmers also feed their pigs with pig feed. Learn what do pigs eat. It’s also wise to have a water trough that holds at least 15 gallons. These large pigs drink a lot of water. They also bathe in their trough, so it’s important to change the water every day.

Set up an area on your property for the pigs to wallow in mud. Pigs like mud because it helps them stay cool.

Although these pigs can reach finishing weights of over 600 pounds, many farmers choose to slaughter them at around 250 pounds. They do so because it ensures the meat is lean rather than having too much fat.

It’s also rather difficult to care for a pig that weighs that much. Their large size is difficult to manage, and it takes a lot to sustain them.

Most pigs are ready to be butchered between six and eight months. By this age, they should be close to 250 pounds. If not, a farmer may decide to wait longer to butcher them. However, if they intend on keeping pigs for breeding, they will not have them butchered until they have completed their desired breeding process.

Below are just a few more interesting facts about the Hampshire pig.

Getting started on raising Hampshire pigs requires a bit of a money commitment. These pigs can cost anywhere from $300 to $600. The price is determined based on their age, the breeder, and their bloodline.

Gilts (female pig less than a year old that hasn’t given birth) can range between $250 – $400. A sow can have up to two litters each year with 10 piglets for each pregnancy on average. You can ramp up your pig farm quickly if you don’t intend to sell or butcher them.

The Hampshire pig originated in southern Scotland and northern England. They were originally called the Old English Breed and were one of the first American pig breeds to enter the country.

Before finally settling on the name Hampshire pig, this breed went through several different nicknames. It was first called the McKay hog, after the first man who imported them from England.

Later, individuals referred to them as Thin Rinds because they featured thinner skins than other hog breeds. They also took on names including Old English Breed, Saddleback, Ring Middle, and McGee hog. To this day, many breeders refer to this breed as the hogs with the white belt, due to their unique appearance.

Are Hampshire Pigs Good for Meat?

With a high muscle-to-fat ratio, Hampshires are a good choice to raise for meat. Many prefer their pork because it is lean; there is less fat. This breed is also ideal to raise for 4-H projects.

What is Hampshire Pig Known For?

Because they grow quickly, they reach butcher weight sooner than other breeds while offering quality meat. Sows make excellent mothers which makes them ideal to breed.

Pig farming is a way to create income streams on your farm. It’s also a way to have a meat source. Hampshires are ideal to raise because they reach slaughter weight quickly and provide a good ROI.

When considering meat pigs to raise on your homestead or small farm, check out various breeds, including the Mangalitsa pig. If you are interested in a heritage meat pig with excellent marbling, consider raising Berkshire pigs. Another meat pig to consider are Kunekune pigs which require less grain to reach market weight. If you have decent pasture for raising pigs, a true pasture pig is the Idaho Pasture pig which was bred to forage.