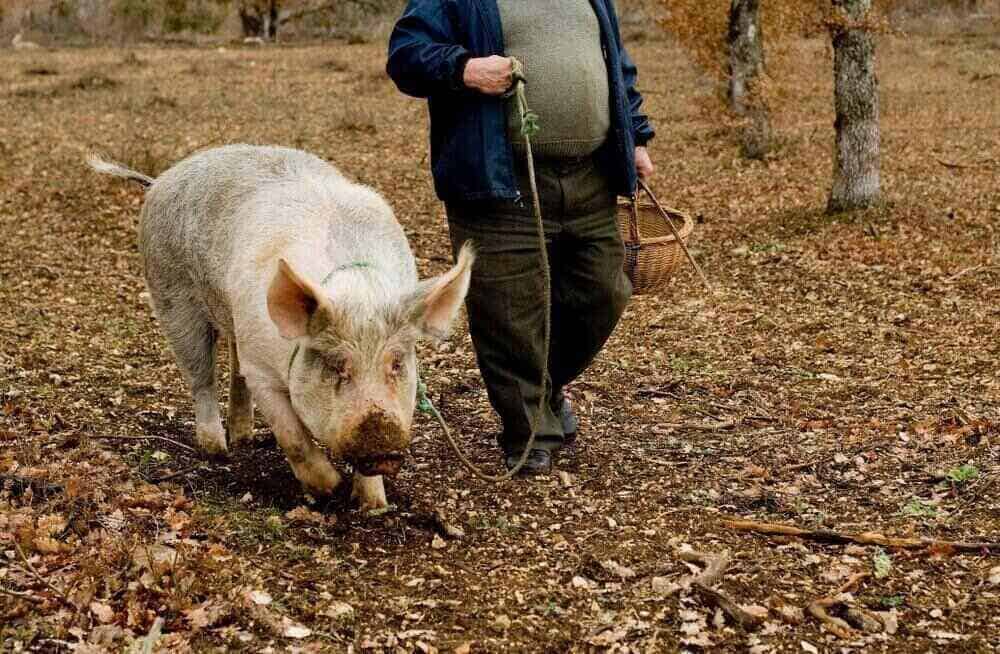 The movie “Pig,” starring Nicolas Cage and directed by Michael Sarnoski, effectively introduced millions of people around the world to the concept of “truffle pigs” or “truffle hogs.” In the movie, Nicolas Cage plays Robin “Rob” Feld, a near-genius chef turned truffle forager who employs the services of his beloved truffle hog to find these rare fungi.

The movie’s storyline is a bit more complicated than just the love between a man and his truffle hog, but for the purposes of this piece, it showcases just how important truffle pigs are to both the owner and the gastronomical societies around the globe.

What Is a Truffle Pig

A truffle pig or truffle hog is a pig that has been trained in truffle hunting. These pigs are good at finding truffles, which tend to grow up to a foot or more underground. As a truffle hunter, the pig is attuned to the musky scent emitted by these fungi. It is believed that truffles emit a scent similar to that of another pig, making a pig the best candidate for sniffing them out.

There’s also the small matter of pigs having around 1113 functional olfactory receptor genes, giving them an incredible sense of smell. Even though any pig breed can be trained to be a truffle hog, most of them happen to be female pigs.

There are two main reasons a beloved foraging pig is often a female pig rather than a male pig:

A truffle hog hunts for subterranean truffles, which aren’t like chocolate truffles. These fungi grow underground and tend to favor soils near broadleaved trees such as oak, hazelnut, chestnut, and pine.

Truffles are often likened to mushrooms in that they are both fungi and have fruiting bodies. While truffles can be described as having a delicious scent and an earthy flavor, they taste nothing like mushrooms. Furthermore, truffles grow underground, whereas mushrooms grow above ground.

It’s difficult to describe what truffles taste like because nothing else quite tastes the same. They tend to have a distinct earthy and musky scent and flavor. Their scent is so pungent that only a little bit is ever used on any dish. Most chefs infuse truffles in the oils they use in cooking gourmet meals.

How Much Do Truffles and Truffle Pigs Cost?

In 2010, a rare two-pound white truffle sold for $330,000 at an auction in Macau. Even though truffles don’t typically sell for hundreds of thousands of dollars, this gives you a slight idea of how precious and expensive these fungi can get. It also shows you just how valuable a pig that can find them would be to the owner.

The price of $330,000 is extreme, but truffles, in general, happen to be quite expensive depending on the specific type and its rarity. For example, a summer black truffle can sell for around $250 per pound, while a burgundy truffle, found in most, if not all, European countries between September and February, goes for around $350 per pound.

Winter black truffles, which grow from November through March, can cost around $800 per pound. In Italy, between October and December, White Alba truffles tend to be the most sought after and retail for around $2,000 to $4,000 per pound.

Truffles are this expensive because they are very rare. They can’t really grow commercially, and they can only grow in extremely specific regions within a very small window of time. To make it worse, they grow underground. You see why truffle pigs are so treasured!

According to the movie “Pig,” a good truffle pig is worth around $25,000. However, you get a highly trained hog that has a good track record of finding truffles for this price.

In real life, most truffle hogs cost around $2,000 or less. These untrained pigs have yet to prove their value on the hunting field. The good news is pigs from any pig breeds can learn to become truffle hunters.

How Are Truffle Pigs Trained to Hunt Truffles?

Since pigs tend to be as smart, if not smarter, than dogs and chimpanzees, they can be trained to seek out truffles underground. The problem always occurs when they aren’t trained well enough to alert their handlers when they’ve found the truffles.

Training a pig to find truffles is like training a dog to do anything. It involves a lot of work. To begin with, the training has to start when the pig is still very young. The truffle pig needs to be taught to find treats and toys in an enclosed environment whenever the owner directs them.

Once this has been achieved successfully, the toys and treats are replaced by truffles. The owner presents the truffles to the pig, sets them loose in a contained environment where the owner suspects truffles might be growing underground, and the pig is directed to find the truffles as she would a toy or treat from training.

The owner must stay near the pig to prevent her from eating the truffles once they find them. In many cases, these pigs are trained to alert their owner when they find the truffles. This is achieved by giving them treats and praise.

This is an extremely important part of the training, as the pig can teach itself to hold out and keep from eating the truffles to receive her favorite treat after alerting the handler.

Yes, pigs are still used for hunting and finding truffles today. This practice has been ongoing for centuries, especially in European countries such as Italy, where the rarest type of truffle tends to grow. Truffle pigs are most popularly used in France, Germany, the UK, Australia, and the United States.

While pigs are excellent at hunting truffles, they aren’t the only animals known to do so. Dogs have also been used to great success in this venture. One of the most popular dog breeds for hunting truffles is the Lagotti Romagnoli, which is mostly bred for this purpose.

How Many Truffles Can Truffle Pigs Find in a Day?

Most good truffle pigs can find up to six truffles in a day. This number, however, greatly depends on several factors. Some of these include the:

Even the best truffle hogs can go an entire day without finding a single truffle, or they could find up to six. Although considering truffle prices, even a single find is still a good payout.

Although they aren’t as rare or expensive as truffles, truffle pigs are just as important to the hunting process as the people who love eating truffles. These pigs thrive in a loving environment and tend to work well when their handler accompanies them on a hunt and, therefore, hardly ever reared for their meat like the rest of the pig breeds.

What Do Pigs Eat

Building a Barn or Shed for Animals