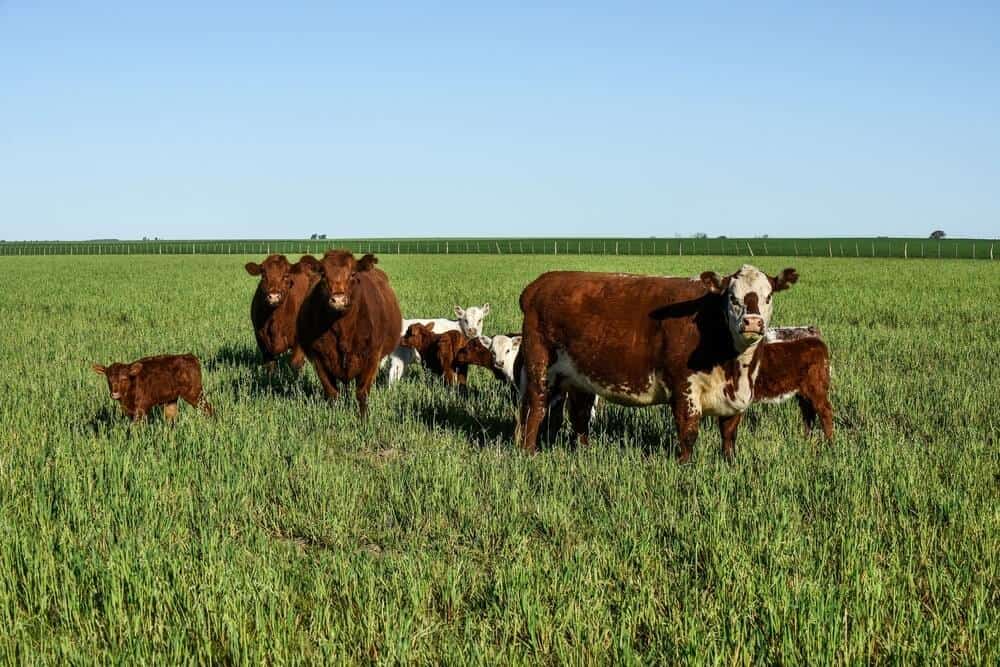 Shorthorn cattle are a popular cow breed across the globe. Known for their high fertility and excellent mothering ability, this cow is reliable (in terms of milk production) and quite hardy.

Having existed and grown in numbers for centuries, the shorthorn cow is now in a slow but steady decline. While this decline isn’t exactly attributed to any key medical concerns with this breed, agricultural changes over the past few years have unfortunately had a negative impact on them.

Nevertheless, they are still some of the most sought-after cow breeds on the market. Let’s take a quick look at Shorthorn cattle and what sets them apart from every other cow breed today.

Origin and History of Shorthorn Cattle

According to the American Shorthorn Association, the shorthorn cow originally came from England. It originated from the Durham, Northumberland, Lincoln, and York regions on the northeastern coast of England.

The Shorthorn cow’s first development happened in the Tees River valley around the 1600s. At this point, this cow was known as the Tees water cattle. It was large-framed and the native breed of the region.

Since these native cattle were so successful and hardy, they were shipped across the world to America. By this point, they were known as the Durham cattle. This was the first improved cattle breed imported to North America. It grew in popularity among native settlers because it was both fertile and hardy.

Early settlers who kept this cow valued it for several good reasons:

Shorthorn cattle were among the first cattle breeds to go with pioneers along the Great Plains and even into the far west. This cow breed grew in popularity so much that by 1854, Midwestern cow breeders and farmers were importing them directly from Scotland for breeding production.

Somewhere along the way, breeders discovered some occurrence of natural hornless cattle within this breed. These became known as the “polled shorthorns.” These polled shorthorns have become exceedingly popular for several good reasons:

These are all qualities that this polled shorthorn breed shares with its original horned counterpart, the Shorthorn cattle.

Besides being stocky, Shorthorn cattle have distinct characteristics and a natural appearance. Here are some factors that can help you distinguish this cattle breed from other livestock.

When dealing with beef Shorthorn, you are going to encounter three distinct colors:

Red Shorthorn cattle may have a solid red color or may have some white markings on their hide. They can also be either horned or polled. These animals are typically bigger than dairy shorthorns and, as the name suggests, are mostly grown for beef production.

For the most part, shorthorn cattle with a solid red color are typically used to help keep the red color whenever these cows are used for cross breeding. In many cases, the white or roan shorthorn cattle can be used with black cattle to get blacks and blues.

These cows are medium-sized. They tend to have short heads, dry feet and legs, and a distinctively long, box-shaped body. They also have quite a bit of meat on them as the bulls are quite masculine. Beef shorthorns have excellent shoulder, ramp, and haunch and loin production.

Apart from the fact that this cattle breed is very adaptable and that the bulls are not only strong but also produce a great deal of meat, one of the other reasons they became so popular is their mothering capabilities.

Any cattle breeder will tell you that the more a cow breed gives you in terms of live calves at birth, the more calves you are most likely to have during weaning. When it comes to calf production, very few cow breeds come close to shorthorn cattle.

Unassisted, shorthorn heifers can give birth to live calves 98% of the time. Not only that, but they give birth to very healthy calves that average about 85 lbs. at birth. This reasonable birth weight often means the calves have a good chance of surviving and excellent growth potential.

As far as breeding is concerned, shorthorn bulls are known as aggressive breeders and are often a popular pick for selective cross breeding. The heifers also reach puberty at a much younger age (359 days) than most cattle breeds.

Whether you are looking for milk production by dairy shorthorns or meat from beef shorthorns, this cattle breed has a proven track record for excellent returns across the board. That’s why they are so popular. The ease with which they breed is also an added advantage to farmers who want to grow their herds.

Do shorthorn cattle have any disadvantages?

Yes, some disadvantages come with shorthorn cattle. These mostly include:

How big do shorthorn cattle get?

Shorthorn cattle are medium-sized, with the average weight ranging from 1,200 to about 1,400 lbs. The bulls weigh around 2,200 lbs. Thanks to their massive size, shorthorn bulls are excellent beef cattle that can give great returns provided they are fed and properly cared for by the farmer.

Do shorthorn cattle have any health problems?

Even though shorthorn cattle are designed to be extremely hardy animals, they have some health concerns. Most of these health problems come from extensive crossbreeding. Some of the most common issues are the aforementioned Tibial Hemimelia.

Others include Pulmonary Hypoplasia with Anasarca (PHA) and Myostatin (MYO), commonly referred to as double muscling. Thankfully, some genetic tests are available for every one of these conditions, and with proper breeding care, farmers can avoid them altogether.

In conclusion, raising shorthorn cattle can be a great way to provide your family with fresh milk and meat. They are a hardy breed that adapt well to a variety of climates and environments. If you have appropriate shelter and pasture, they are easy to care for. When raising beef cattle, sometimes it makes sense to use protein tubs for cattle to supplement when forage quality declines.

Whether you are interested in raising Shorthorn cattle or any cattle breed, it is important to research reputable breeders.

Learn about other cattle breeds, including Limousin cattle and Belgian Blue cattle.