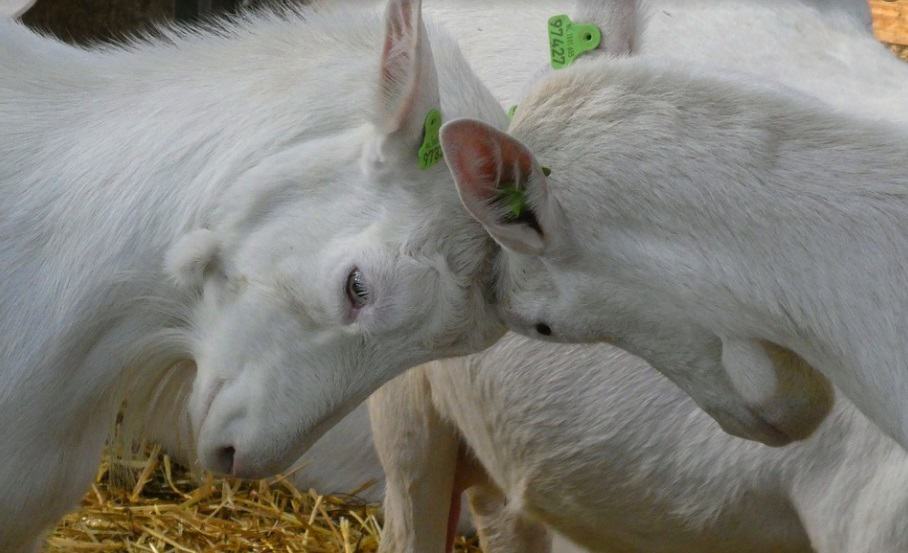 Here we explain why do goats headbutt. It may seem barbaric, strange, and dangerous to you, but headbutting is a natural part of goat behavior. The slamming of heads together has several functions, including establishing the chain of command, exercising, drawing attention, self-defense, etc. It only becomes a challenge when you cannot keep it in check, and the goats become a nuisance among themselves and other animals or farm residents.

Knowing why goats headbutt in the first place can help you prevent the situation from escalating without excessive restrictions on their natural urges. Headbutting is an integral part of their socialization that can’t be eliminated completely but should be controlled to facilitate coexistence with other farm residents. Keep reading because we are about to demystify the ritual.

Why Do Goats Headbutt

It Is a Goat Socialization Ritual

Headbutting is the basic means through which young goats learn to defend themselves and their herd from external predators. The kids are encouraged to headbutt each other during playtime to develop skills and agility. It keeps them fit and healthy as they grow into adulthood, and they rarely get injured, so it is no cause for worry.

To Protect Themselves Against Predators and Perceived Enemies

Goats’ survival instinct will lead them to headbutt anyone they think is an adversary as it is the only way they know how to fight. They have the advantage of their skulls being able to take on the resistance of an armored car which makes them prevail over their rivals, instilling confidence.

Their skulls are more adaptable to impact than most other animals, making them a formidable weapon.

A Dominance Play Between Male Goats

Adult bucks often headbutt to establish a hierarchy that places the most dominant males at the top leadership positions. Leadership is critical because goats don’t hunt and forage for themselves after leaving their mothers like other mammals. They remain in a group and are socialized to follow a leader who keeps them alert to danger and protects them.

Headbutting is also used to impress female goats and intimidate other male goats during mating season. The alpha buck will get their pick of does before the rest get an opportunity.

Why Do Goats Headbutt Humans?

To understand why a goat is headbutting a human, you must establish the relationship between the goat and the human and the prevailing circumstances. You should also consider the force of the headbutt to determine whether there is malicious intent.

Goats know the humans who feed them and typically have a good relationship with them. It is common for goats to give their human handlers a gentle nudge with their heads which is their display of affection or a way to prompt feeding or ask for water when hungry or thirsty.

If the goat gives the handler a full-on headbutt, there is a problem that needs to be addressed urgently. The goat might have a medical condition or is feeling stifled in an overcrowded shed. Sometimes the males want to exhibit dominance over the handlers as well, which shouldn’t be allowed.

Regardless of its motivation, you should isolate all aggressive goats away from the rest of the herd until you can determine the source of aggression and deal with it.

The goats might also headbutt a human because they feel threatened or suspicious, especially if a stranger visiting the farm comes too close and provokes the herd. The introduction of new faces should be done gradually so that they have time to earn their trust.

Goats’ Heads Are Built for Headbutting

Goats belong to a group of organisms called vertebrates identified by an internal backbone surrounded by other bones. They also have a hard skeleton made of bone which supports body tissues and anchors muscles.

Vertebrates also have small joints between the bony plates of the skull that resemble wavy lines, which are referred to as sutures.

Goats’ and sheep’s sutures are more intricate than other vertebrates. The joints boost their skull’s shock absorption capability significantly by distributing the force of the blow evenly across the entire skull. It is consequently dissipated with minimal impact on the skull.

This shouldn’t be misconstrued to mean that a goat’s skull is indestructible. They often suffer injuries when they slam their heads against brick walls, steel fences, or go up against goats or other animals with horns. We strongly advise against letting them test these limits.

What Triggers Excessive Headbutting In Goats?

While headbutting is a goat’s way of life, it can go overboard and injure the goats, handlers, and other innocent farm occupants. If you feel like it is getting out of hand or a calm goat suddenly develops aggressive headbutting tendencies within the herd or against other animals and inanimate objects, it is time to investigate the trigger(s).

The upsurge of this aggressive goat behavior might be linked to one or a combination of the following circumstances.

Goats also get uncomfortable in cramped living conditions, despite their communal nature. They need room to graze and relax. They also eat a lot and will trim the greenery in your yard in record time. When the food becomes scarce, they will start competing for it, triggering aggressiveness often released through head butting contests.

This happens when the goats are uneasy for one reason or another. It could be overcrowding or tension from sensing a predator lurking nearby. It can also be a strange human presence or the introduction of a foreign goat who disturbs the established pecking order.

The stressor should be taken care of as soon as it is identified. A new handler should start by gaining trust by feeding them to be associated with good intentions. New goats should also be introduced gradually; keep them close but separate until the rest of the herd gets accustomed to their presence before letting them mingle.

If you can identify the external predator causing distress, hunt them down or trap them and hand them over to the concerned authorities so they can be relocated to more suitable habitats.

Animals, including goats, tend to increase their headbutting tendencies when they lack mental stimulation. For instance, goats are social animals and will do this in protest when they are isolated from the rest of the herd. They will slam their heads into inanimate objects for lack of playmates and might get injured in the process.

Goats might lash out at other goats, animals, or even humans when they are sick or suffer from irritations or pain from injuries. Older goats are most affected as they also start to lose their sight and hearing. This makes them paranoid whenever they sense another animal or human approach, so they resort to violence in the form of headbutting.

You should have a veterinarian on standby to periodically assess the herd’s health as a whole so that these illnesses and injuries can be detected earlier.

A goat owner should be conversant with their goats’ normal behavior to differentiate between when their goats are just head butting to blow off steam, when there are underlying issues, and when they are developing aggressive behavior.

The first instance is okay and is encouraged, but the other two need to be nipped in the bud before the aggressive behavior becomes rampant and uncontrollable. Compulsive headbutting can lead to property damage, injuries to the goats and their handlers, or even worse, injuries to your children.

Headbutting is a natural goat activity that shouldn’t be a cause of concern as long as the goats do it in moderation and it doesn’t adversely affect their handlers or the rest of the farm. It keeps the goats sane and defines their social structure, which is essential for their emotional wellbeing. Learn about goat horns and why goats have them.