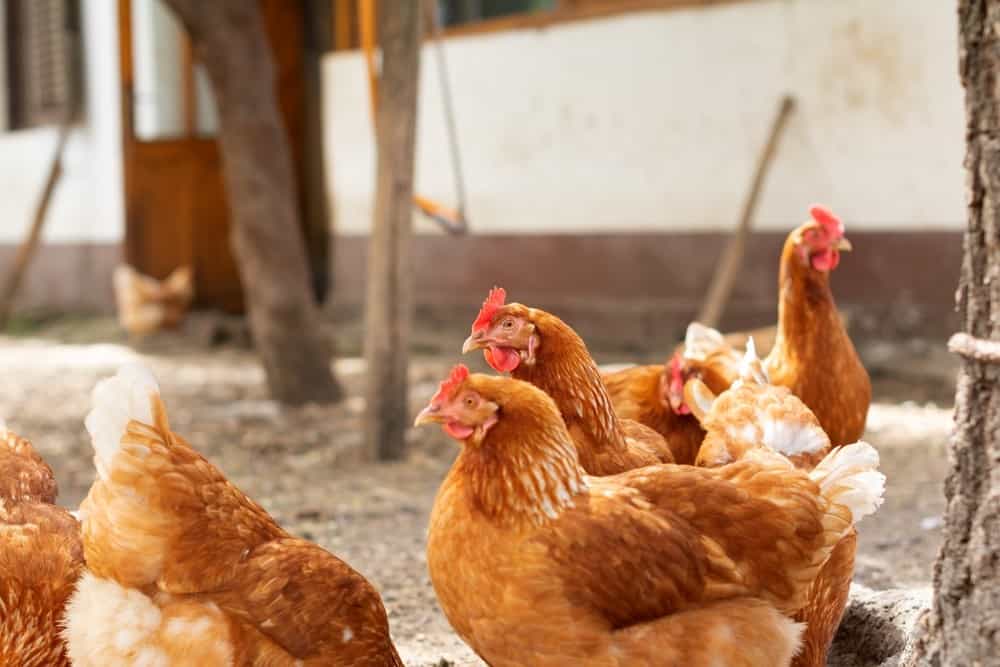 Gold Star chickens go by several names. They are typically referred to as the Golden Sex Link, Red Sex Link, or the Gold Star, among many other similar names. This type of chicken is a breed hybrid designed for increased egg production.

It has many positive characteristics, chief among them being that its cold hardy. As a chicken keeper, the Gold Star chicken would make a wonderful addition to your backyard flock if you are looking for a chicken breed that is resilient, has an even-keeled temperament, and can produce many eggs. The roosters are not aggressive, yet protective. Gold Star chicks are sex-linked.

Let’s take a quick look at the Gold Star chicken hybrid cross and some interesting facts.

The Origin and History of the Gold Star Chicken

However, the most common Gold Star chicken hybrid cross was developed in the 1950s. This was a cross between a Rhode Island White female and a Rhode Island Red male. The idea was to develop a hybrid of chicken incredibly prolific at laying eggs and easy to sex.

As a sex-linked breed, you can immediately tell the sex of a Gold Star chick as soon as it hatches. The males tend to be light yellow without any red, while the females tend to have varying red.

The Golden Star chicken or Gold Star hens have red-brown feathers interspersed with some white. They also have a U-shaped body that is mostly upright. Gold Star roosters are mostly all white in color, while some have red feathers on their shoulders.

The male and female chickens have yellow eyes, legs, and beaks. One of the main characteristics of the Gold Star chicken is that they are sex-linked. This means that you can tell their sex while they are still baby chicks. You can tell the sex as soon as they hatch.

Mostly, you can distinguish between the male and female chickens by their colors. Females have a golden buff and come with stripes, and male Gold Stars tend to be pale yellow.

Another key characteristic of the Gold Star hen is they hardly ever get broody. These hens are already crossbreeds, so their chicks rarely retain their adult traits or colors. They don’t even keep the gold sex link trait. Gold Star chicks tend to show a wide range of varying color patterns.

The Gold Star is a rather peaceful chicken. They are mostly very friendly, especially toward children. These chickens also avoid confrontation when within a flock. That’s one of the main reasons it’s advisable to have them in a non-aggressive setting, especially if you have many other backyard chicken breeds on your farm.

Finally, these birds are quite curious and energetic. They like to roam about and forage for their food and exercise.

One of the main reasons the Golden Star chicken is such a favorite breed with many poultry farmers is because they are prolific layers. Hens can start laying eggs at around 18 weeks and produce about 5 eggs a week, or up to 320 eggs a year. Their egg sizes range from large to extra-large and, in most cases, are brown and delicious. They are considered to be among the best egg laying chickens.

Even though the Gold Star chicken breed is often bred for its egg production capabilities, it can also be bred for meat, making them a dual-purpose breed. Because these chickens are sex-linked, farmers can choose to keep the males if they want to focus solely on meat production. When mature, the roosters can weigh up to 6 or 8 pounds, making them reasonable meat producers.

These birds also happen to be very adaptable. Not only that, but they are also cold-hardy, even though their combs can be quite susceptible to frostbite. Since they are curious and energetic birds, they are active foragers that often require very low maintenance, even as a Gold Star chick.

When raised in a free-range setup rather than just a chicken coop, they can be very self-sufficient, which makes them quite ideal for first-time chicken keepers looking for a highly productive chicken breed.

That being said, here are some of the main reasons you might want to consider raising Gold Star chickens:

If you have been in the market for a reliable chicken breed that’s not only docile and friendly but also has excellent egg laying capabilities and an adequate meat source, the Gold Star might just be what you need. They are almost self-sufficient and very good with children, which makes them ideal for first-time chicken breeders.

Sex links are not listed in the American Standard of Perfection because they are considered hybrid chickens. This means they aren’t able to be shown for exhibition. Another fact is because they are hybrids, they don’t breed true. However, being a dual-purpose chicken, they are excellent as backyard chickens. They lay eggs and you can raise them for meat. Many flock owners keep Gold Star chickens as pets.

Do Gold Star chickens have any health issues?

Even though Gold Star chickens are fairly healthy, they have a few health problems. This is mostly because they have been crossbred for maximum egg production.

That, unfortunately, undermines other aspects, including health and resilience. The biggest health issues faced by the Gold Star chicken are related to their prolific egg production. The high production rate often leads to conditions such as egg yolk peritonitis and cancer.

Are Cinnamon Queen chickens the same as Gold Star Chickens?

The typical lifespan of the Gold Star chicken is between three and five years.

How long do chickens live