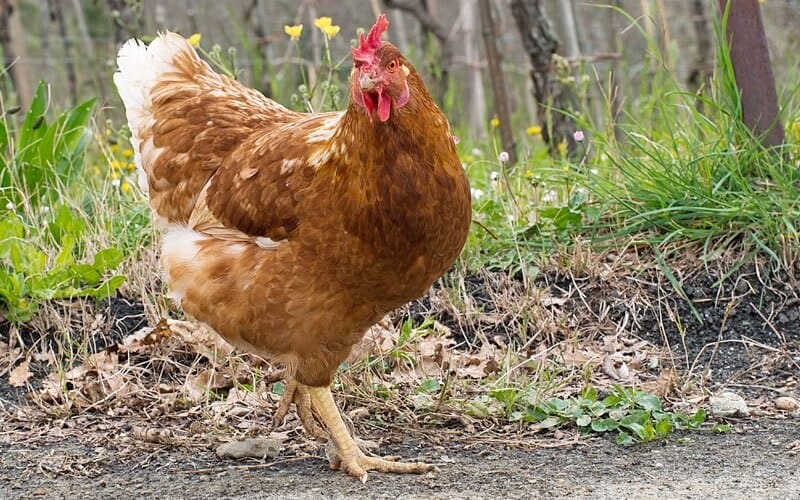 If you are looking for a mighty egg producer, the Cinnamon Queen chicken is one to consider. These chickens have quickly become among the most beloved chicken breeds in the US and across the globe. This is because they are have a friendly demeanor, produce eggs at a younger age than many other standard heritage breeds, and lay large-to-extra-large brown eggs.

Backyard chicken keepers find Cinnamon Queen chickens a joy to raise and nurture. Not only do they mature quickly, but they also have decent meat and excellent mothering instincts. many flock owners use the Cinnamon Queen roosters for meat.

If you are in the market for a hybrid chicken breed that is both easy to raise and quite profitable in a number of ways, Cinnamon Queens might be a good option to consider. Here are some interesting facts and what to know about these egg layers, roosters, and chicks.

The Cinnamon Queen chicken breed doesn’t have much of an illustrious history. At least not as much as most other breeds in the poultry world. One of the main reasons this breed exists is because poultry farmers wanted to find a breed that was not only hardy and easy to raise but also had a fast body growth rate and the ability to lay many eggs.

This endeavor was successful as the Cinnamon Queen chicken breed is as dual-purpose a breed as you can get. Not only do these chickens grow quickly, but they also lay an incredible number of eggs each year.

Cinnamon Queen chickens are easy to tell apart from other backyard chickens or birds. One of the clearest indicators of this breed is color. Let’s take a quick look at some of the most iconic and easily recognizable characteristics, as well as the appearance of the beautiful Cinnamon Queen chicken.

One of the most unique characteristics of the this chicken breed is that the first generation can usually be sexed by color alone. Cinnamon Queen males are often white in color, quite like the Rhode Island White. And Cinnamon Queen hens are often a beautiful shade of red and brown and look a lot like the Golden Comet chicken breed.

Pullets are usually brown with a red tint. Cockerels are white.

In the second generation, however, these birds can no longer be sexed by their color alone as both males and females come in an assortment of colors. Since this bird was a successful crossbreed between the Rhode Island White female and the Rhode Island Red male, there are many similarities in their appearances.

This is also one of the main reasons the Cinnamon Queen chicken is an exceptionally hardy bird that can survive harsh winters and offer an impressive egg production rate. It is also considered a remarkable meat bird.

Adult Cinnamon Queen hens have lush plumage that comes in a wide range of brown and white, and that’s how they get the cinnamon color and name that they are very well known for within the American Poultry Association. The roosters are a little different, with their plumage being just as lush but varying in color from white mixed with some red and brown or just stark white.

Finally, the Cinnamon Queen chicken’s legs are typically yellow. However, you can find some birds with a slight tint of green on their legs.

The Cinnamon Queen chicken is easily one of the most docile and sweetest birds in any backyard flock. This is one of their most endearing qualities because they can easily integrate into any backyard flock, making them easy to introduce to any chicken coop. Since they are friendly birds, they can be kept as pets and are a good addition to any farm with children.

In general, Cinnamon Queen chickens do not have a strong tendency to go broody. However, the hens are good mothers.

When it comes to laying eggs or overall egg production, very few chicken breeds can perform quite as well as Cinnamon Queen chickens. Given the right conditions, a Cinnamon Queen hen can lay up to 300 eggs a year.

Apart from being such prolific layers, these birds are known for laying large brown eggs. In fact, at the very beginning of their laying cycle, some Cinnamon hens can lay jumbo-sized brown eggs.

Another excellent characteristic is that this chicken starts producing eggs early. By the time it is 16 or 18 weeks old, a Cinnamon Queen hen can start laying large brown eggs. At this age, the production of eggs will be extremely high. It tapers off as the hen gets older.

When taken care of properly, Cinnamon Queen hens will continue to dependably lay eggs for about 3 years. Apart from age, only extreme cold and poor feeding can disrupt this prolific egg layer. Unlike other chicken breeds, who stop laying in the cold months, Cinnamon Queens usually lay in the winter months as well, even with the reduction in sunlight.

Even though the Cinnamon Queen chicken isn’t considered a meat chicken due to the fact that it is primarily raised for its prolific egg production — you can cull males and older hens for meat.

Many homesteaders and backyard chicken owners will raise these cinnamon chickens for their eggs and then as their egg production declines, cull them for meat. They dress out decently for the table.

Important if you plan to slaughter older hens: After the age of nine months, there is a risk that the chicken meat will become stringier and tougher. This means if you are butchering older birds, you may want to either grind the meat or stew it for the nutritious and delicious broth that a free-range chicken will yield.

If you raise a rooster and hatch fertile eggs, they grow slowly enough so you won’t have to process all the meat birds at once. Over the course of 2 – 3 months, you can process the males for meat as you need them. The cockerels will remain healthy and continue to grow for a sustainable source of meat on your farm.

Cinnamon Queen roosters will work hard to protect their flock. However, they aren’t as aggressive and domineering as roosters from other breeds. If you decide to keep a rooster, be sure to have a minimum of 8 – 10 hens per rooster. Raising a rooster will enable your farm to produce fertile eggs which you can hatch into chicks.

If you decide to raise a rooster to hatch Cinnamon Queen chicks, you may want to raise some of them for meat. Many chicken owners will raise the males for meat and keep the females for eggs. If you do this, it is important to switch your meat flock from chick starter to a broiler feed when the chicks are 4 – 6 weeks old. This will help ensure maximum growth in a shorter period of time.

This hybrid breed lives from 3 – 7 years. A healthy diet is essential so they can keep up with their higher-than-average egg production. Some Cinnamon Queens live over a decade with proper care. A lot depends on their flock mates. This breed is friendly and not aggressive or domineering. Keeping them with other mild-mannered chicken breeds or other Cinnamon Queens will minimize stress in the flock and will minimize injuries, etc.

Is the Cinnamon Queen chicken good for meat?

This chicken breed was primarily bred for its egg production. However, that doesn’t mean it isn’t a good meat bird. The fact that it has a compact body and a fast growth rate makes it an excellent meat bird. This is a hybrid chicken with the roosters being quite good at meat production.

How big can a Cinnamon Queen chicken get?

Cinnamon Queen chickens are extremely compact and heavy hybrid birds. The roosters can weigh anything between 5.5 pounds and 7.5 pounds. In contrast, the hens can weigh anywhere between 4.5 lbs and 5.5 lbs. These chickens can even get heavier depending on what you feed them and how you care for them.

Do Cinnamon Queen chickens have any health issues?

The Cinnamon Queen chicken was bred to be a hardy bird, and they don’t typically have as many health issues as most other birds. That, however, doesn’t mean that they don’t come with some health concerns. Here are some of the most common chicken diseases that may affect your flock:

Homesteaders will appreciate the dual-purpose nature of Cinnamon Queen chickens. In addition to being steady and reliable layers, these Rhode Island Red descendants dress out well for table meat. You can use your hens to lay eggs for market, but the roosters will be excellent as meat birds.

Adding Cinnamon Queen chickens can be a great addition to your homestead. They are a hardy breed known for its good temperament and high egg production. If you are interested in raising these birds, learn beginner tips for raising chickens.