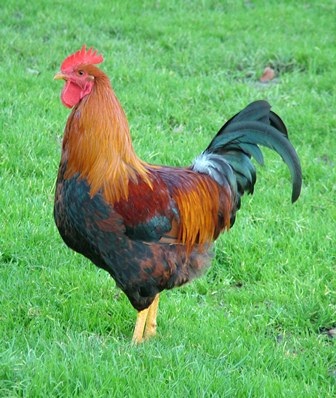 Deciding on keeping a rooster or not, that is a big question! When it comes to owning roosters, there are pros and cons to consider. There are many people making money by owning chickens and roosters as well.

Pros and Cons of Keeping a Rooster

Rooster has several positive roles in a flock of chickens. A rooster provides fertilization services to the hens in the flock. Fertile eggs means you can hatch baby chicks.

Rooster will serve as a guard and defender against perceived and actual danger. Your rooster will seek out food for the flock and alert the other backyard chickens that he’s found something tasty.

As far as fertilization goes, owning a rooster is necessary only if you want to hatch chicks or you want fertile eggs for the kitchen. Hens will lay nutritious eggs without a rooster. A virile rooster will mate frequently with most or all the hens in his presence. How Do Chickens Mate

How many hens per rooster?

If there aren’t enough hens to divide his time, the rooster may wear them out. This can cause damage to the hens’ combs, necks, and backs from the rooster’s beak and spurs. Generally, a good minimum ratio is 8-10 hens per rooster.

How long do roosters live?

Rooster, like most other chickens, has an average lifespan of about 5 to 8 years. However, with great excellence in care, a rooster may live for as long as 15 years. But it will be less active with the hens as it grows old.

Always watching over his backyard chickens, a vigilant rooster may appear to never rest. He’ll scan the sky and landscape for potential predators, warning the hens when he senses danger.

While protection is a positive trait, some (but not all) roosters take it too far. If they become aggressive, they can injure adults and children by jumping or pecking at them.

A rooster…. He will check over food he finds before calling his girls to come and dine. Usually, he’ll stand back and let them get started before he begins to partake. On the other hand, he may fight for his share. He may also be aggressive toward a person carrying anything he thinks contains food.

Your rooster will love treats as well. Give him and your chickens some chicken scratch to keep them busy.

Where do you live? Know that your rooster will make noise. While your hens may well go unnoticed; neighbors close to your home will absolutely know you have a rooster. Roosters will crow at daybreak. A rooster may crow throughout the day if he senses danger or a predator.

If you keep more than one rooster, they will crow to establish dominance. Roosters will crow if they perceive danger and may need to fight. Learn why do roosters crow so you can help minimize the number of times they do. 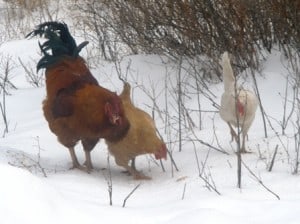 Keeping a rooster with hens

A good rooster will:

Good things about having a rooster

Roosters crow at the crack of dawn and all through the day. If you like this sound, it’s a good thing. A rooster will offer protection. Plus, a rooster just looks cool—and maybe colorful–strutting around the farm.

Good reasons to raise backyard chickens without a rooster

You won’t want to consider getting a rooster if you want eggs for your table but do not want to hatch backyard chickens or eat fertile eggs. If you and/or your neighbors don’t like the sound of a rooster crowing all day long, do not get a rooster.

If the noise won’t bother you, consider how close you live to your neighbors. Even if you are somewhat close, it may not be an issue. Consider where the chickens and rooster are on your property in relation to your neighbors.

Consider also if the neighbors will only hear your rooster if they are outside. They may not hear him when they are indoors.

If you really can’t decide if you should get a rooster and are okay with not ever getting a rooster, you can ask your closest neighbors if they would mind.

However, before you do this, be very sure you will be listen if they say no. If you ever think you will want to get one, it’s best not to ask for their permission.

Consider special care the rooster will need. If you don’t want to remove the rooster’s spurs— a fairly simple procedure — from time to time, then don’t get one.

Other advantages to not having a rooster chicken

Backyard chickens will not be injured by a rooster’s spurs or beak during mating. You won’t have to worry about an overprotective rooster becoming aggressive, jumping or pecking at people. 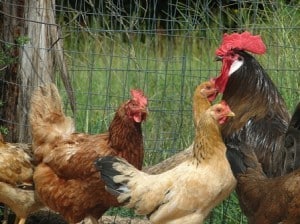 Among all breeds, there will be gentle roos and aggressive roos. But some breeds are known for more docile roosters than others. Our favorite source for checking out personalities, among many other characteristics, is Henderson’s Chicken Breed Chart.

Generally, the more a cockerel is handled as a chick, the less likely he is to become an aggressive rooster. But even a docile roo will jump into action if he perceives a threat.

Once cockerels reach maturity, it can be difficult to keep more than one male in the same small flock.

One will claim dominance and will see the others as threats and competition. Sometimes this hierarchy is respected and no one is injured. More likely, there will be fights and injuries. The simple solution is to have only one rooster per backyard flock. At our farm we’re currently in between roosters.

We’ve had three colored broiler roos, but they were all overprotective and so heavy they damaged the hens’ backs and necks while mating. Our grandchildren like to go in the chicken yard to cuddle young chicks and their favorite hens.

We like walking among the backyard chickens without danger of a rooster jumping at our legs. We also appreciate knowing that our hens won’t be injured so often.

Eventually, we’ll keep a colored broiler rooster for our broiler breeding program. But for our general chicken population, a gentler roo is in order.

Since we’ve decided to focus on Buff Orpington hens for our layer flock, we’re going to try a couple of Buff Orp roos. They are known to be fairly docile—a good fit for our family. Wyandotte roosters are also considered to be less aggressive than other rooster breeds.

Owning and keeping a rooster is something to carefully consider.

Factor in the amount of space you have, how many chickens you will keep, predators in your area, and noise.