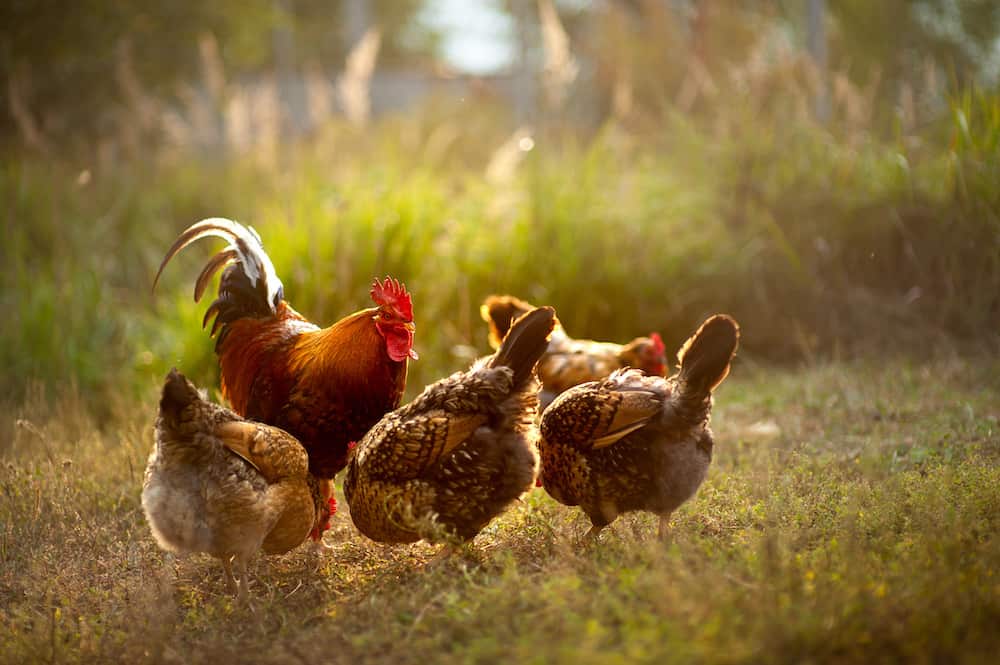 When learning how chickens mate, you’ll discover that it is a process that comes with a little bit of variety. Still, some standards are typical across all types of chickens and roosters.

Learning about chicken mating rituals ensures you can give them whatever they need for successful breeding.

Do Chickens Need a Mate to Lay Eggs?

One of the top questions about a female chicken or hen is do chickens need a mate to lay eggs?

If what you want are baby chicks to continue laying eggs for you in the future, then your hen will need a mate. This is because the eggs that the hen creates are not yet fertilized.

Similar to humans, if the egg that the female carries is not fertilized, a baby will not grow. If the hen doesn’t have her egg fertilized, then there will be no baby chick.

What this means is that if you just want eggs for eating, then you don’t need to have roosters at all. The hens will make the eggs themselves and lay them.

The laying of the egg is something that the female does itself by forming it inside of its own body. It doesn’t need another chicken or rooster to form the egg.

The unfertilized egg is formed when the egg is released from the hen’s ovaries into the area called the oviduct. This allows her to lay the egg without a baby chick inside.

How Do Chicken Get Pregnant?

When trying to figure out how do chicken get pregnant, you might picture two chickens copulating the same way that humans do.

In reality, how chickens mate is very different from how humans do it.

Chickens’ sexual reproductive organs are located inside their body, which means that they work very differently as a human’s reproductive system does.

Instead of one organ entering the other, the external cloaca, which is a sexual organ, touches together and allows the sperm to be inserted into the hen.

When the sperm is inserted into the female chicken, it goes into the hen’s reproductive tract and fertilizes the egg. This is what enables the chicken to form a baby chick inside the egg.

The hen’s body then gives the proper amount of nutrients to the egg until it is laid. This is how the hen gets pregnant. It happens fairly quickly.

How the Rooster Gets the Hen’s Attention

When it comes to chicken mating rituals, the rooster is the one who has to put forth the work to begin the process. The rooster will dance, flap its wings, or do a two-step around their mate.

These dance-type moves are not always done, but they are common. Still, some roosters will often just pounce on the female to begin the impregnation process.

The flirting or courting portion of this mating ritual depends on the rooster.

There are several main dances you’d notice when learning how does a chicken mate, which are wing drag, step moves, and tidbitting.

This is a dance that the rooster will do when they want to impress the hens. It consists of the rooster dancing around the hen that he wants to impress while he flaps his wings.

The wing drag is done to show off his beauty and large size in hopes that the hen will come to him. This can be done in front of other hens, or just when one is alone.

Either way, the ending is the same. If the hen is interested, she will go to the rooster to mate.

These moves are what people tend to call the two-step because of how the rooster moves. It is a dance wherein the rooster steps around the hen, trying to get behind her.

This dance is made to show her that he wants to mate with her. It is much more forward than the wing drag, but this is common with many roosters.

If the hen wants to mate, then she will move into the mating position. After that, the process of impregnation begins.

Lastly, there is tidbitting. This dominating approach to how does a chicken mate is the most aggressive way of mating that you will see with chickens and roosters.

It consists of the rooster calling the hen while picking up real or fake pieces of food.

When the hen sees what is happening, she will make her way over to see what’s there. Then, the rooster will pounce and begin the mating. With tidbitting, the rooster is aggressive with the chicken.

How Does a Rooster Fertilize an Egg?

Learning how do chickens breed does not end once the mating ritual or dance is done. Instead, afterward, the rooster will attempt to fertilize the egg of the hen.

Now, how does a rooster fertilize an egg?

Again, because chickens don’t have external sex organs, this can seem more complicated than it is. Then again, when you come to think of it, the act is quite simple.

As mentioned before, the organs of the rooster and the hen simply need to touch. This allows the sperm to move from the reproductive organ of the rooster to the hen.

The sperm then makes its way through the hen’s reproductive system to the egg. With that, we can see that the rooster does little to help fertilize the egg besides giving the sperm.

After successfully giving the hen his sperm, the hen’s body will then take care of everything else.

The hen is the one responsible for getting the sperm to the egg and aiding in the fertilization process. Her body will also be the sole source of nutrients for the baby chick to form.

How Does a Rooster Impregnate a Chicken?

How can you be sure that the chickens are mating and not just playing around?

Though the hen does much of the work when it comes to keeping the egg and allowing it to be fertilized properly, the rooster does the work during the impregnation.

While the hen is the one accepting the mating ritual of the rooster, how does a rooster impregnate a chicken?

It’s rather simple. The rooster must ensure that the sex organs touch so that his sperms can transport into the hen’s reproductive system.

For the rooster to be able to do this, it must climb onto the back of the hen. It will position itself so that the organs can be aligned.

The rooster will stand on the back of the hen, hold onto the hen’s neck feathers, and balance himself with his feet.

The hen will typically get into a squatting position and spread out her wings to be able to balance herself better.

Once the cloacas (the sex organs on the chickens) touch, then they will be done and leave to continue whatever they were doing.

How Long Does This Process Take?

The length of this process is very short. Because it ends when the sperm enters the hen’s reproductive system, it is over when the cloacas touch. This can take only a few minutes.

The act of copulation for chickens is known as treading. However, this can cause some feather damage to the hen if it is too aggressive, or if it happens too often.

So, if you notice that some of your chickens have fewer feathers or damaged feathers, watching for excessive treading can be a way to fix that problem.

Also, you could choose to get a mating saddle for the hen. This can be placed on the back of the hen when treading occurs, so the feathers aren’t damaged.

You will have to watch out for when the rooster begins the ritual to ensure that it helps enough. This could be difficult for those who don’t watch them often.

Still, if you do this, then your hen will be able to keep her undamaged feathers for much longer.

Treading could also cause bald spots to appear on the hen. So, this saddle helps curb two different issues at once.

Chickens have two reproductive organs. These are the ovaries and the oviduct. Chickens typically have one ovary. According to Penn State University, a chicken’s right ovary stops developing once the chick hatches. The other ovary continues to grow and mature.

A chicken’s ovary is a cluster of sacs. It’s located between the hen’s neck and tail and attached to the hen’s back. The sacs contain thousands of ova, each ovum containing its own folicle.

How Do Chickens Mate

You also know that you don’t need a rooster if you want your hen to lay eggs for eating. If so, consider the best egg-laying chickens. You only need a rooster when you want fertilized eggs to hatch chicks.

Now that you know how do chickens breed, be sure to have enough hens per rooster, then let nature take its course.

The roosters will likely take charge quickly and do most of the work. The hen will then create the baby chick inside the egg.

As long as you give them enough nutrients to sustain their health, as well as provide them with a shelter that doesn’t cause them stress, you can breed chickens quickly and easily.

Chicken mating rituals are interesting. You will see them firsthand when you raise chickens and a rooster together.