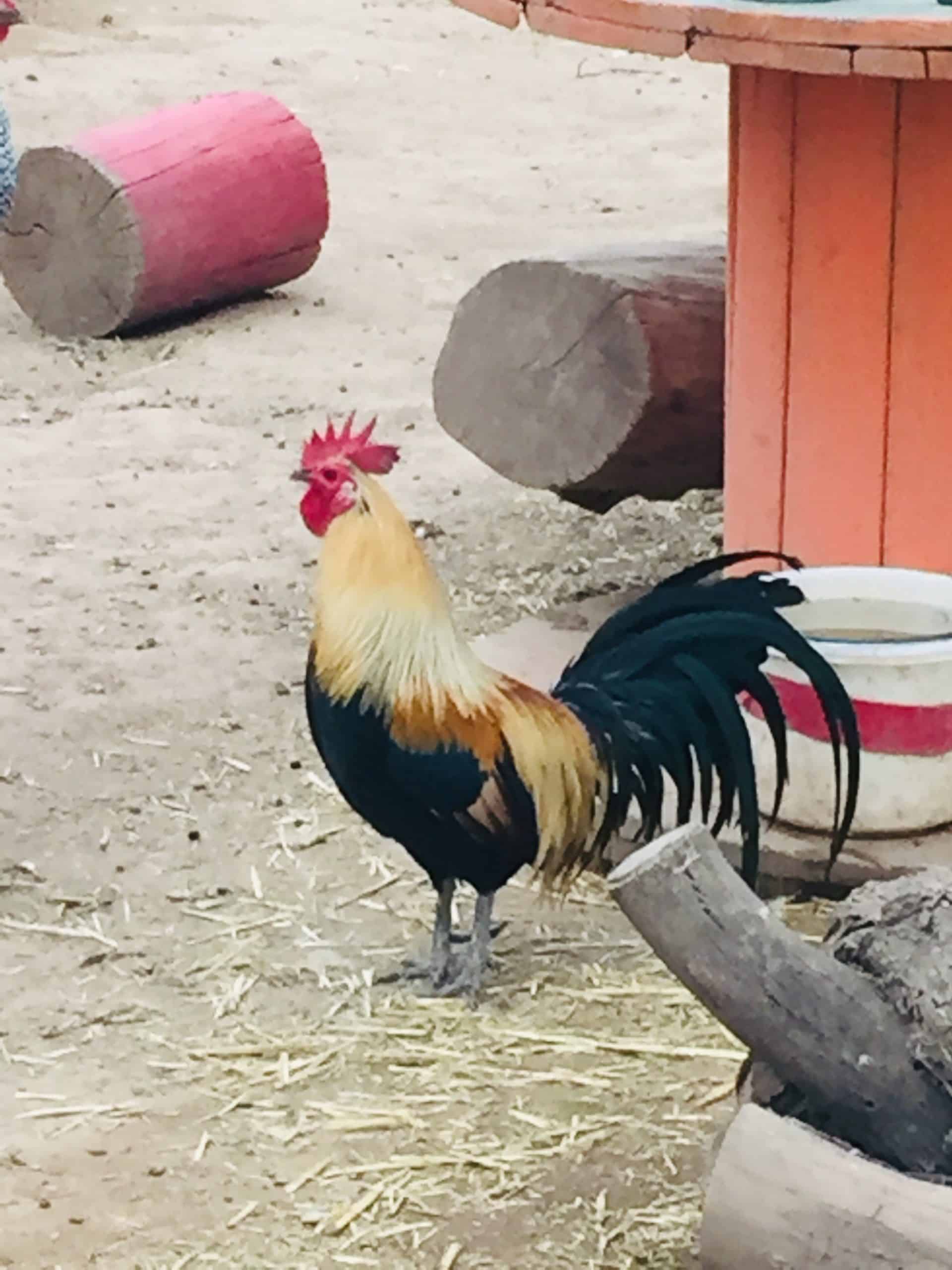 While rooster crowing might seem like nothing more than mindless noise to us, it plays a variety of important roles in mating, security, and more. Why do roosters crow? Let’s take a closer look, including how you can potentially limit any disturbance.

If you keep roosters on your property, or live near someone who does, you’re likely quite familiar with the sound of their crowing.

A rooster’s crow is often heard far and wide, and they don’t particularly care who they disturb.

This is one of the reasons many cities and towns have ordinances against having roosters even if they allow chickens. Roosters are often outlawed, especially in urban areas, because they can be a noise nuisance.

Roosters crow in the morning, throughout the day, and at night for all sorts of reasons, including for reasons nobody understands. That said, researchers have identified the most common types of crows and reasons for crowing:

Before domestication by humans, roosters were commonly found throughout Southeast Asia, in countries such as Thailand, India, China, and Myanmar. They mainly lived in jungles with dense vegetation, which provided cover.

The thick jungle made it difficult for roosters to see one another, and they likely developed their crows to alert one another to their presence. A crow says, “Hey, this is my territory, and these are my hens. You other roosters should stay away!”

They have excellent hearing. They’ll crow back and forth to each other multiple times, which helps them determine whether the other rooster is getting closer or farther away.

Also, crowing to mark their territory is safer than fighting. They can warn invaders to keep their distance without putting themselves at risk of injury. While roosters will fight if necessary, they prefer to warn rivals away verbally.

Some research suggests roosters experience a surge of testosterone in the morning, and that might make them feel like crowing. It also helps explain why roosters crow at sunrise. They’re not just reacting to the light; they’re also feeling virile and energized.

Additionally, many roosters crow after a hen lays an egg. Nobody truly knows why this happens, but it’s theorized crowing is the rooster’s way of announcing his fertility to any other roosters nearby.

If you have multiple roosters, you’ve likely seen this type of crowing in the chicken yard. Roosters form a hierarchy, which crowing helps establish.

In any group of roosters and chickens, one head rooster will rule the roost. The dominant rooster will typically crow first and last. After he unleashes the first crow, the other roosters will each take turns, following an established pecking order and social rank.

After a round of crowing, the head rooster will crow a final time. It’s as if he’s reaffirming his status as the leader.

Interestingly, roosters will crow out of turn if they want to challenge the pecking order. If the head rooster is old or sick, a younger rooster might crow first to issue what’s essentially a declaration challenging the status quo.

In response to a challenge, the head rooster will defend their position by fighting. If they win, they remain in charge. If they lose, they might stay in the flock in a more subordinate role, or they might leave the flock entirely.

Warn Others of a Predator

Always on the lookout for trouble, roosters crow to alarm their flock there is a predator. Whether it’s overhead from a hawk or an eagle, or a land predator such as a coyote, raccoon, badger, or bobcat, a rooster will crow to warn the others to seek protection.

While roosters crow all times of day, they will most reliably crow at dawn. The sound of a rooster crowing can carry across several blocks.

Rooster Crowing and the Sunrise: Is There a Connection?

The classic image of a rooster is that of an animal who crows his heart out at the break of dawn. But is this true? If so, then why do roosters crow in the morning?

The most thorough study into rooster crowing was conducted by Japanese researchers Takashi Yoshimura and Tsuyoshi Shimmura in 2013.

They found that crowing is the result of two factors:

Roosters have an internal circadian rhythm clock of 23.8 hours. Just before the sun rises in the morning, they’ll feel a biological urge to crow in response to their biological clock. So, while they’ll crow for a variety of reasons throughout the day, the main reason they crow in the morning is instinctual.

But it gets slightly more complicated. As discussed above, roosters follow a pecking order. When the head honcho crows in the morning, the others follow suit.

Another interesting wrinkle is that, while roosters don’t crow in the morning as a direct response to seeing the sun, they sometimes crow as a response to light. So, for example, roosters commonly crow at night if they see headlights from a passing car.

Additionally, roosters might crow at night because they sense danger and want to warn their flock. Bright light, noises, and other disturbances all typically warrant the use of crowing as an alarm from danger and a potential rival.

Ultimately, roosters crow throughout the day and night. It can just feel like their crow is especially frequent and loud in the morning because it disturbs the sleep of anyone nearby.

It’s also often quieter in the mornings. They often crow just as much throughout the day, but it’s less noticeable because folks are already awake. With traffic and other noises, it’s not as obvious.

Roosters pack a lot of power into each call. Their crows average around 90 decibels but can exceed 130 decibels, which is similar to standing 50 feet away from a jet during liftoff. No worry about damaging their vocal cords because roosters don’t have them.

Why doesn’t a rooster’s crowing damage its own hearing? It turns out, their ears have an incredibly sophisticated design, with two important features:

Additionally, hens have the ability to narrow their ear canals, which is why roosters can crow loudly around them without damaging their hearing.

If you keep roosters on your property or are looking to add some, make sure you understand all relevant local noise ordinances. Even areas that allow someone to keep chickens might not permit roosters or at least limit the number a single person can own.

For instance, the town of Hopewell, New Jersey, has an interesting rule for roosters. They’re only allowed on someone’s property for ten days. The purpose of the visit is for mating only. After mating, they need to move on!

How to Limit Crowing

All healthy, adult roosters crow, no matter the breeds of rooster you raise.

While the volume and frequency of each bird’s crow will vary, there’s simply no such thing as a quiet rooster. So if you decide to keep a rooster on your property, you’ll need to expect some noise, including noise in the morning at daybreak. They will crow in the morning.

Truthfully, there’s no single, simple solution that reduces crowing. However, you can try a few different strategies, which can help. Chicken keepers can consider these important tips for raising roosters to help keep crowing to a minimum:

Then, he won’t feel the need to express his position in the pecking order. Overall, he will be a less aggressive rooster.

Roosters crow when they sense danger. Headlights and other bright lights, other animals, loud noises, and other loud noises or movements can increase a rooster’s need to crow.

Be sure to consider how much space chickens need. Smaller spaces increase stress, aggression and competition among backyard chickens and roosters.

If you keep more than one rooster, ensure each has enough hens. A flock with a minimum of 10 hens per rooster will minimize competition and aggression and keep hens safe.

Why do roosters crow? They crow for a variety of reasons, including their internal clock, light stimuli, and even for no reason at all!

Roosters are often a great addition to your homestead or farm. They’re interesting, intelligent animals who help protect your hens. However, keep in mind they’re also quite vocal at times.

Crowing is one of their expected behaviors. While the sound of crowing may not bother you, you’ll have to consider where you live, your neighbors and if you want to hatch fertile eggs. Also consider if the protection a rooster can provide his flock is important. When it comes to a chicken vs hawk, a rooster will be an asset. They are vigilant protectors.

There are pros and cons of keeping a rooster.

Remember the rooster vs hen ratio. Having enough hens will minimize aggression.

Fortunately, with a bit of patience and understanding, flock owners and rooster keepers can quickly learn to not only tolerate their crowing but even embrace it. A rooster crow can even be a great way to start your day. You can rely on them instead of an alarm clock.