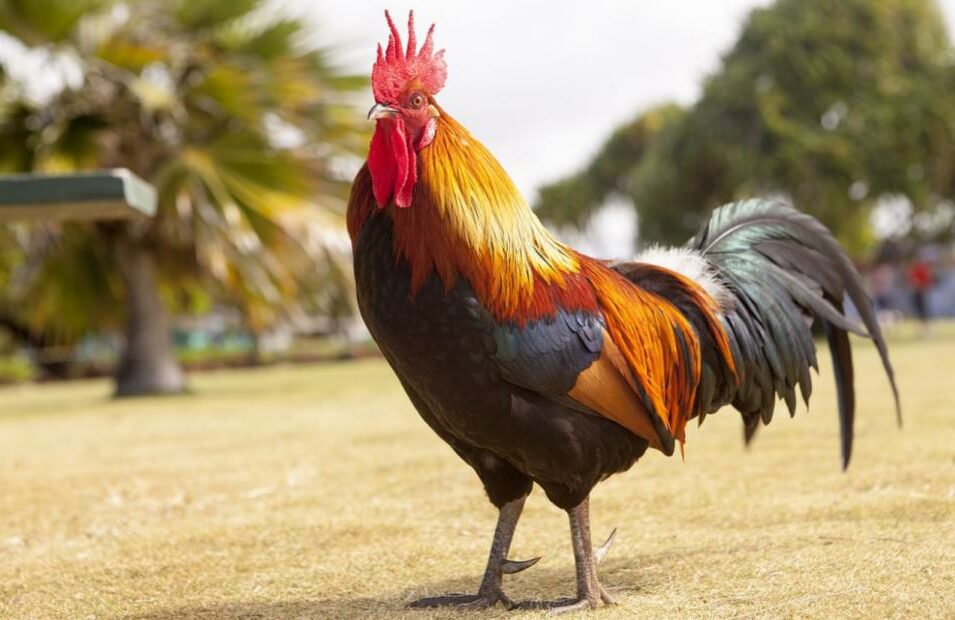 Chicken keepers and chicken enthusiasts alike know that when left to their own devices, chickens can live for 5 to 10 years. However, due to one thing or another, this is hardly ever the case.

Let’s look at roosters specifically to see what factors affect how long they live and what you can do as a chicken farmer increase their lifespan — unless you cull them for meat.

How Long Do Roosters Live

In the wild, a rooster’s lifespan is often much shorter than roosters raised in captivity. If lucky, wild roosters can live for 2 to 5 years. This is mostly because they face a gauntlet of threats, including:

These threats effectively shorten the rooster’s life expectancy. A life, when compared to roosters raised in captivity, is lived in a constant high-stress environment.

Roosters raised as backyard chickens enjoy a slightly less stressful lifestyle than wild roosters. As a result, domesticated roosters can live for 5 to 10 years, even though some outliers can live up to 15 years.

Just because domesticated roosters don’t face as many challenges and threats as wild roosters doesn’t mean that their lives are completely stress-free. After all, there are other stressors, such as:

The biggest threat to a rooster’s lifespan, however, is the chicken keeper. Since roosters don’t lay eggs like hens, they are often considered nothing more than a meat source. They get slaughtered earlier in life while still young and with tender meat.

How Long Do Bantam Roosters Live?

While there are farmers who raise chickens for their egg-laying capabilities, there are also those who raise them for meat and others who still raise them as pets. Farmers who are looking for pet chickens often end up raising bantam chickens.

Bantam chickens are a miniature version of regular chickens. These much smaller chickens tend to take up less space than backyard flocks.

The term bantam is used for any small fowl, from ducks to chickens and even guinea fowl. In most cases, real bantam chickens are naturally smaller than their typical counterparts. These chicks often occur in most breeds without human interference.

Since bantam chickens are often raised as pets, they enjoy some privileges that regular backyard chickens might not. As a result, bantam roosters tend to have a relatively long lifespan. It’s common to find bantam roosters living for 7 to 10 years, and not unusual to find some that live up to 15 years.

How to Tell a Rooster’s Age

It’s not easy to tell a rooster’s or a chicken’s age by looking at them. However, there are some factors that can help you make an educated guess.

For example, egg-laying hens start egg production when they are around 18 to 22 months old. This means that any backyard chicken laying eggs is at least that old.

The same principle can be applied to roosters. Cockerels, or young roosters, begin to crow when they are about 6 to 8 weeks old. So, whenever you are near a rooster and hear it crow, you will know it’s at least 6 to 8 weeks old.

However, a rooster crowing isn’t a definitive way of telling its age. Here are other tricks you can use.

Look at the Rooster’s Shanks

The rooster’s shank is the bottom part of his legs just above the foot. Shanks are to roosters what calves are to humans. Unlike humans, roosters either have smooth shanks or coarse ones.

The Size and Length of the Spurs

A rooster’s spurs are its main weapons against any threat that requires physical confrontation. Left unchecked, these spurs tend to grow out and become longer.

Cockerels—male chickens under a year old—tend to have shorter spurs, while mature roosters tend to have longer ones. The biggest problem with this method is that some chicken owners cut these spurs as the bird grows.

Look at the Feathers

Chickens naturally molt, which means they lose their old feathers and grow new ones. Roosters tend to start molting at about 12 to 18 months of age. In younger and healthier roosters, molting is an annual event. It slows down when the bird gets older. Even though molting still occurs in older roosters, there are often some noticeable changes.

For instance, the new feathers will be more vibrant and vividly colored when the rooster is younger and healthier. The older the rooster gets, the less vivid these feathers are; they lose that luster and vibrancy.

If you look closely at an older rooster, you will notice that some of his feathers aren’t as brilliant as others. There’s a noticeable disparity between the older and newer feathers.

Look at the Rooster’s Comb and Wattle

This is one of the best ways to tell if you have a mature rooster in your flock. The older the rooster, the droopier the comb will appear.

While it’s not easy to tell how old a rooster is by just looking at it, you can use these methods to get a ballpark figure.

Like every other animal, some factors will negatively and positively affect the quality of life and longevity. These are some of the factors that directly and indirectly affect a rooster’s life expectancy.

Chickens have been around for about 10,000 years. The current modern chicken can be traced back to Southeast Asian red junglefowl. Even though these chickens are hardy, they have been crossbred so much over the years that many have lost that natural hardiness regarding health.

These crossbreeds have been designed to be heavier, faster-growing, larger, and, in some cases, smaller (bantams). All these alterations have a direct impact on the chicken’s quality of life as well as its longevity.

If you are interested in raising chickens that live longer, one way to go about it is to look at the chicken’s gene pool.

These factors directly impact how well set up, in terms of genetics, the current rooster is and how much better it naturally is at fighting off diseases and natural degradation.

Farmers who want their roosters and egg layers to remain healthy and live longer must provide excellent healthcare. This often calls for frequent visits from the vet.

Commercial chicken farmers are advised to vaccinate their poultry against as many chicken diseases as possible. Diseases such as Marek’s disease are not only quite common but also very deadly to a backyard flock.

The more medication and better healthcare you provide your backyard chickens, the healthier they will be and the longer they will live.

A rooster’s living conditions have a direct impact on its health. Backyard chickens tend to benefit most when they can roam around. This allows them to simulate their natural habitat by scratching the ground and playing in the dirt.

For the most part, commercial chicken farmers build chicken coops to contain their flock. While this is often better in terms of insulation and protection from predators, it isn’t always the best option to let the chicken roam freely while scratching the ground for worms and other sustenance.

If you take the time to study chickens or any other animal cooped up in an enclosed space, you will see that they tend to be a bit gloomier compared to animals that can roam about freely. Roosters that live in enclosed spaces suffer from the same problem. As a result, they tend to fall sick more often and have a lower quality of life.

Another factor that comes into play when talking about living conditions is the number of roosters in the flock. Like most male creatures, roosters often fight one another for dominance and mating rights.

If you have an overly aggressive rooster in your flock, it could directly impact the quality and life expectancy of the other roosters. Having multiple roosters in an enclosed space often leads to fights, injuries, and, in many cases, death.

Another unintended consequence of having multiple roosters in your backyard is that some roosters won’t get to mate, which goes against their natural instincts.

In most cases, if you have about ten hens that have reached sexual maturity, you only need one rooster to get fertilized eggs from the laying hens—if you want fertile eggs.

This, in itself, is detrimental to the health of the roosters and the hens. When mating, roosters get aggressive and use their claws and beaks to hold down and bite the hens.

Since a healthy rooster can mate several times a day, having fewer hens in the coop could mean that these hens suffer more from this aggressive mating act than they should. This, in turn, could lead to injuries and even death in some extreme cases.

While chickens tend to thrive on grass, grains, and vegetables, roosters can eat small insects, reptiles, and even smaller birds as they are omnivorous. Providing your flock with the right commercial feed gives them the vitamins and proteins they need to grow big, strong and fight off diseases.

How long do roosters live are based on many things. In the right conditions, roosters can live from 5 to 15 years, but they typically live for about seven years. Nutrition, living conditions, and genetics are key in determining a rooster’s life expectancy. It’s also different if they live in captivity versus in the wild.

Keep in mind, many backyard flock owners cull roosters for meat if they don’t want to keep roosters, or if they already have one in their flock. It’s important to have 8 – 10 hens per rooster. This means, oftentimes roosters live a shorter life than they otherwise would have.

Learn more about roosters, whether you might want to raise one with your hens or if you are just curious:

Do Chickens Need a Rooster to Lay Eggs?

Keeping a Rooster Pros and Cons