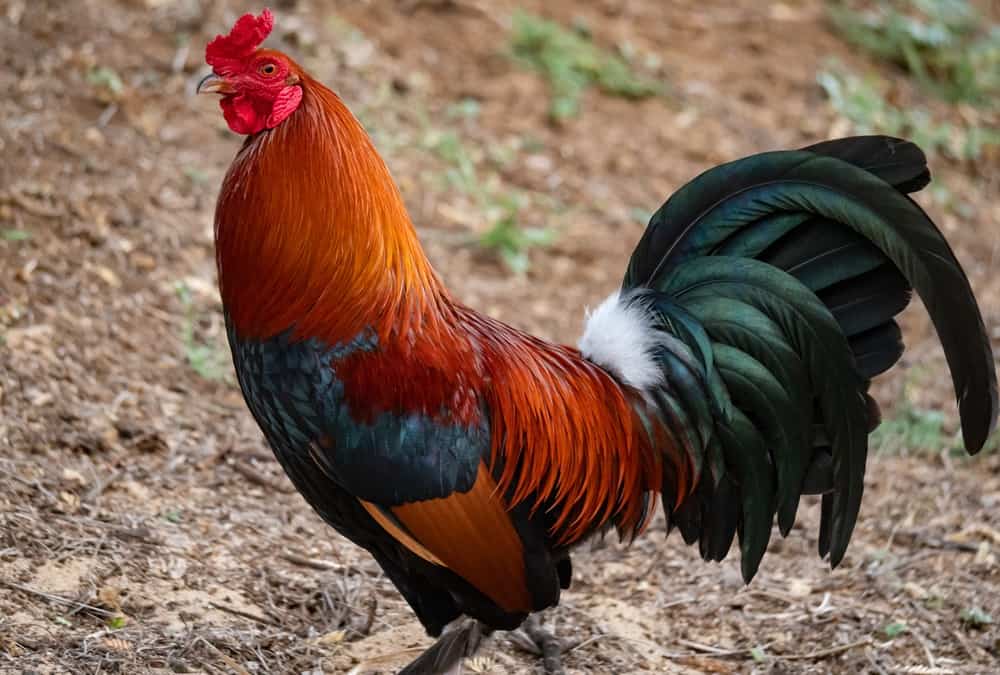 Tourists in Maui spend much of their time and money searching for sea whales and turtles. However, one local species requires only a tiny bit of effort to spot. Which one, may you ask? The wild Maui chickens.

You will see Maui chickens everywhere, even in the densest areas of Maui. Why are there so many chickens in Maui? What kind of breed are Maui chickens? Let’s take a closer look.

How did chickens get on Maui?

Chickens have been part of the Hawaiian island for a long time now, and you will likely observe them in the area. Feral chickens have been living alongside the people in Hawaii for many years, descendants of escapees from long-gone local backyard chicken coops and farms and others with roots that go to the time of the chickens brought to Hawaii by the Polynesians in the early days.

It is generally believed that around 1,000 years ago when the Polynesians settled on the island, they brought red junglefowl with them. Shortly after the arrival of Captain Cook in 1778, the domestic chicken and the red junglefowl were crossbred. Now, it seems that these chickens are taking over.

Why are there so many chickens in Maui?

In short, numerous wild chickens roam around Maui and other Hawaiian islands because of natural catastrophes such as storms and hurricanes that free domestic chickens. Since there aren’t many predators that can prey upon the chickens or their eggs, they continue to increase in number.

Two of the most significant storms that released chickens into the wild include hurricanes Iniki and Iwa. People also bred many roosters and domesticated chickens for cockfighting after hurricane Iniki ruined all crops across Kauai in 1992. These birds crossbred with local fowl and the chicken population has since exploded in number.

What kind of chickens live in Maui?

Due to the unsupervised crossbreeding between the red junglefowl and other domestic chickens, Maui chickens are recognized as hybrids.

The most popular breed on Maui is the red junglefowl, called “moa” by island inhabitants. The bird has a distinctive look. Its feathers are awash in bright colors like red, white, orange, brown, and gold. Many birds that you see on Maui are bright and colorful.

The red junglefowl, believed to be the ancestor of the domestic chicken, was mainly brought over by the Polynesian Explorers to Hawaii as a source of eggs and meat. However, the colorful feathers also served to embellish the costumes and clothes of Maui royals.

The other type of chickens you’ll find are Hawaii’s wild chickens, a genetic mix of jungle fowl, fighting birds, and other domestic breeds. They resemble a lot of jungle fowl. They are small, swift, and flexible. Most roosters sport unique reddish feathers and huge hair combs, and they crow incessantly, but hens have small combs and more variety in color than the cocks.

Some call them wild, and others call them feral. In any case, these domestic animals now roam across the entire Hawaiian islands, including Maui.

Interestingly, the red junglefowl is a protected species. It’s illegal to eliminate, cull, or remove red junglefowl, but the issue with that is that since a lot of crossbreeding has occurred unsupervised, it’s often unclear which chickens are native to the island and difficult to distinguish what’s “moa” or wild chickens with mixed parentage.

Why are Maui chickens famous?

Can you eat the wild chickens in Maui?

Chicken itself is trendy in Maui. Almost all types of food, from curries to tacos, contain chicken. However, it’s not likely to be meat from the wild chickens of Maui.

The wildfowl has a sour taste and lacks the beautiful poultry flavorings of the raised fowl. In addition, they’re usually too skinny to be suitable for consumption. Even the feral cats won’t consume them, and they don’t have any natural predators in the area. Scientists developed domestic chickens to be flavorful, and they get a diet to ensure their health, and the meat is tasty.

The laws that protect native Hawaiian birds also make it hard to consume wild chickens, and it is sometimes difficult to differentiate the predators from the protected species.

Since wild chickens are cross-bred with various fowl, they don’t taste like you’d expect. Instead, you get an extremely distasteful bird. Additionally, the wild chickens of Maui eat anything they get their hands on, and this omnivorous diet has resulted in a less than delicious taste.

Maui chickens have resulted from crossbreeding red junglefowl and domesticated species. And now, because of an array of natural disasters and a lack of a natural predator, they have multiplied by hundreds. These chickens of Hawaii have turned into an attraction for tourists. There aren’t many locations around the globe where chickens and humans are so close, and it’s fascinating to observe.

Learn about raising chickens in your backyard. Some are raised more as meat chickens and others are excellent egg layers and others are dual purpose. You will also want to decide if you want a rooster. There are many pros and cons to raising a rooster. With a rooster, you can hatch fertile eggs. Roosters also provide protection for the hens. Backyard chickens are popular in many areas for a food source.