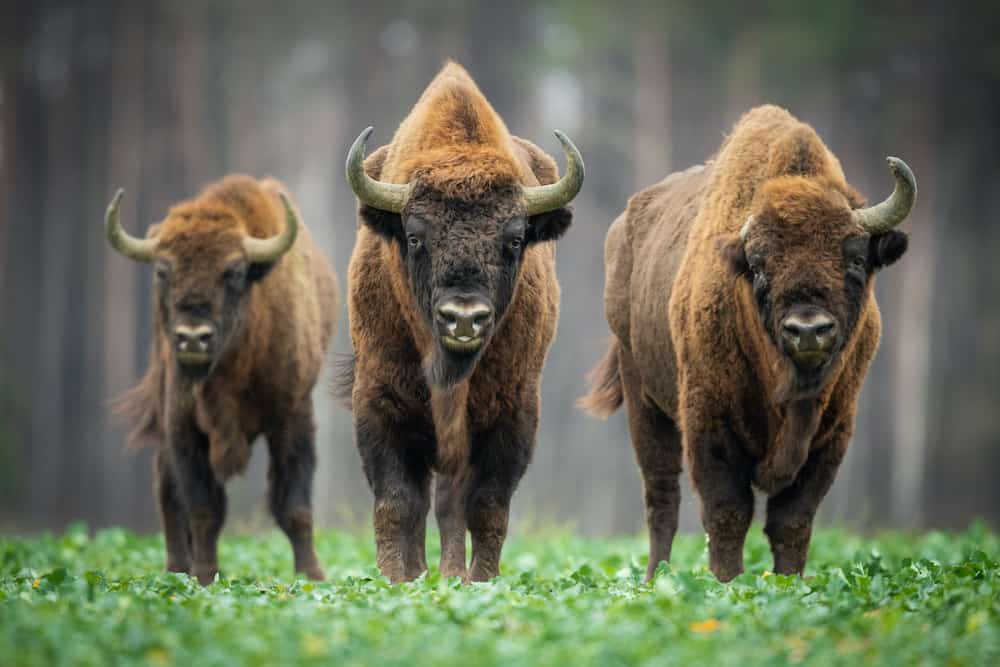 Bison vs Buffalo – Are you confused about the difference between buffalo and bison? It’s common to confuse them.

Learn about the difference between these grass-eating mammals. What sets them apart? Is there really a difference in the first place?

Is Bison Another Name for Buffalo?

One thing that led us to this state of confusion is because we are accustomed to people who use the word bison to refer to buffalo and vice versa.

In North America, people use the word buffalo to refer to bison. Unfortunately, it is scientifically inaccurate.

Defining what they are is the first step to tell the difference between bison and buffalo.

What Is a Bison?

So what is a bison, anyway? In a nutshell, a bison is an animal that belongs to the Bovidae family.

What Is a Buffalo?

Coming from the French term “boeuff“, buffalo simply means “large cow.” They are also part of the Bovidae family but are found in Africa and Asia.

Is a Buffalo and a Bison the Same Thing?

It is understandable why people would mistake one for the other. They look strikingly similar and also belong to the same family.

Other points define the difference between buffalo and bison other than their locations and scientific names, including:

Bison, especially males, grow up to almost 13 feet in length, from their head to their hind, and weigh up to over 2000 pounds.

Buffaloes, on the other hand, usually only grow up to 11 feet in length and weighs less than 2000 pounds.

Some buffaloes, such as the water buffalo, can weigh up to almost 3000 pounds, but still only go up to nine feet in length, which is four feet shorter than the average bison.

Another difference between bison and buffalo is the horn size. Buffaloes can have gigantic horns of up to six feet for both sexes, while bison only have horns up of up to two feet.

In terms of shape, the African buffalo horns sweep up to their ends, giving them a handlebar-mustache-like shape, while the Asian buffalo has crescent-shaped horns.

On the other hand, the bison’s sharp horns have a slightly curved C shape.

While buffaloes and bison look similar especially to the untrained eye, they actually have a few noteworthy differences:

Bison have a pair of large, muscle-rich shoulder humps that stunt their hind legs, while buffaloes don’t have one, so their bodies are more symmetrical compared to bison.

The Bison’s hump gives it an advantage over the buffalo. It enables the animal to use its head as a plow to help sweep away snow during the winter season.

Bison are pretty hairy creatures. They have thick and two-layered shaggy coats. Their coats protect them and keep them warm, especially during the cold winter months of their natural habitats of the plains.

Then, when the colder months are over, these animals shed their hair and simply regrow them.

Buffalos live in warmer areas. Hence, they have finer coats that they keep and don’t regrow in batches. They just grow normally and naturally.

Bison have long, shaggy, and an unkempt beard, while buffaloes don’t have beards at all. Again, we believe that the differences in their beard growth are strongly related to their habitats.

One herd of buffalo usually has members ranging from 50 to 500 buffaloes per pack in most times of the year.

During the rainy season, though, you’ll find buffalo herds having at least a thousand members.

On the contrary, bison usually live in small, separate female and male herds, except during the mating or summer season wherein they come together.

Still, they don’t have as many members per herd like the buffalo. 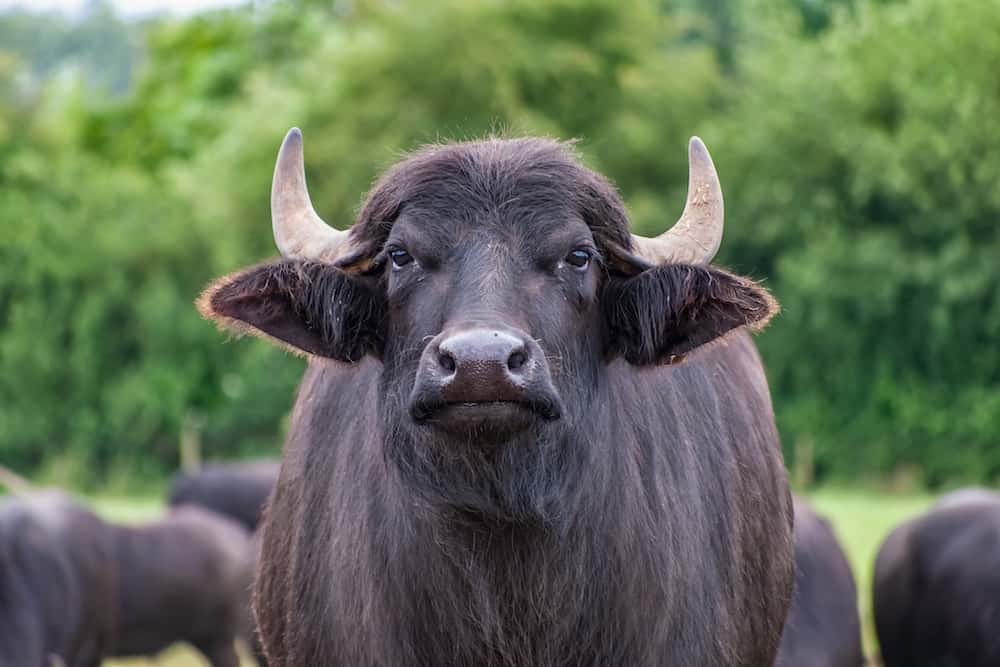 Why Do We Call Bison Buffalo?

Now that we have gone through the differences of bison vs buffalo, you might be wondering, why did people start referring to bison as buffalos?

That’s because the settlers in our land simply didn’t have the resources we now enjoy today. They only had to rely on their memories.

They thought that bison looked similar to buffaloes. They may have considered them to be a different breed. They likely didn’t have them side-by-side to compare the two.

Since we are done talking about the difference between buffalo vs bison, here’s another thing that you’re probably wondering about: Can you raise bison?

Yes, you can, but we don’t recommend it to complete beginners. Raising bison is similar to raising beef cattle. However, it’s not the best type of livestock to raise for the first time.

They can be difficult to handle. They’re big, and you wouldn’t want them to feel threatened.

They also don’t care much about humans in the same way that other livestock does, even the more domesticated ones, so they really require proper handling. You’ll have to watch the horns of bison as well.

If you think you are ready or you already have experience raising other types of livestock, here are some tips that can help you out:

1. Bison Need a Wide Space of Land for Grazing

While you can place bison in a smaller pen and feed them daily, they will not reach their full potential if they’re not allowed to roam around. An area with grasslands is ideal.

They also need a ready supply of fresh, clean water for drinking. It would be great if you can find a plot of land with a natural water source like a creek or a pond.

Otherwise, you would have to dig a well, install a windmill, and even have a stock tank for support.

Finally, you need to install bison-proof fencing. Bison are really strong, so you would need to at least have fencing that’s six feet high and six lines of barbed wire.

As we mentioned above, handling bison properly can be quite challenging. The best way to make this easier is by providing it a comfortable place to live in.

If the bison is happy and contented with your lot, then it also won’t feel the need to escape or go elsewhere.

Depending on the size of your lot, start with a small herd size that can live on comfortably. It doesn’t matter if you’ve reached the full potential of your space.

You can simply grow your herd little by little. This will also soften the learning curve. You can start looking for your bison from local ranchers and auction houses.

Pay close attention to the selling price since you might want to sell your own bison later for profits.

Bison need various vaccines and deworming regularly. Fortunately, you don’t have to do this on your own or bring your herd anywhere.

You can simply request a house call from your local veterinarian and let them do both to herd members on the same day. The only thing you need to prepare for is the corral, where your vet can perform the procedures safely.

Some vets also specialize in these tasks. Their experience will prove to be beneficial.

After growing your herd, you will want to sell your calves every six months. Remember to keep the females for yourself so that you can continue building your herd even if the mothers eventually retire.

Bison is really profitable to sell, but you can also continue raising them to complement your self-sufficient homesteading lifestyle.

You can raise them for their meat that some people even find more delicious than beef. You can raise bison as part of a sustainable homestead.

In fact, they’re ideal for people needing beef alternatives that contain fewer calories and less fat. In our experience, we have also found that they have better marbling compared to other meat. Expect their meat to have a slightly more “gamey” taste, though, since it has less fat.

In the USA, settlers used the term “buffalo” to refer to bison due to their striking similarities.

However, buffaloes and bison are not the same. Their weight, horns, and general appearance are different if one only knows where to look.

Bison are bigger than buffalo with smaller horns and thicker coats. Plus, you can raise them for their meat or resell them for profit.

Buffalos, on the other hand, are not native to the United States. They are from Asia and Africa. They are not recommended to be raised as livestock on a farm. If you are considering bison vs buffalo to raise, choose bison. They are found in Europe and North America.

There are a few things you should consider before deciding to raise bison as a homesteader, though. They require land to graze on, and unlimited supply of fresh drinking water.

Regular vaccinations and deworming are also a must to keep bison healthy, strong, and disease-free.