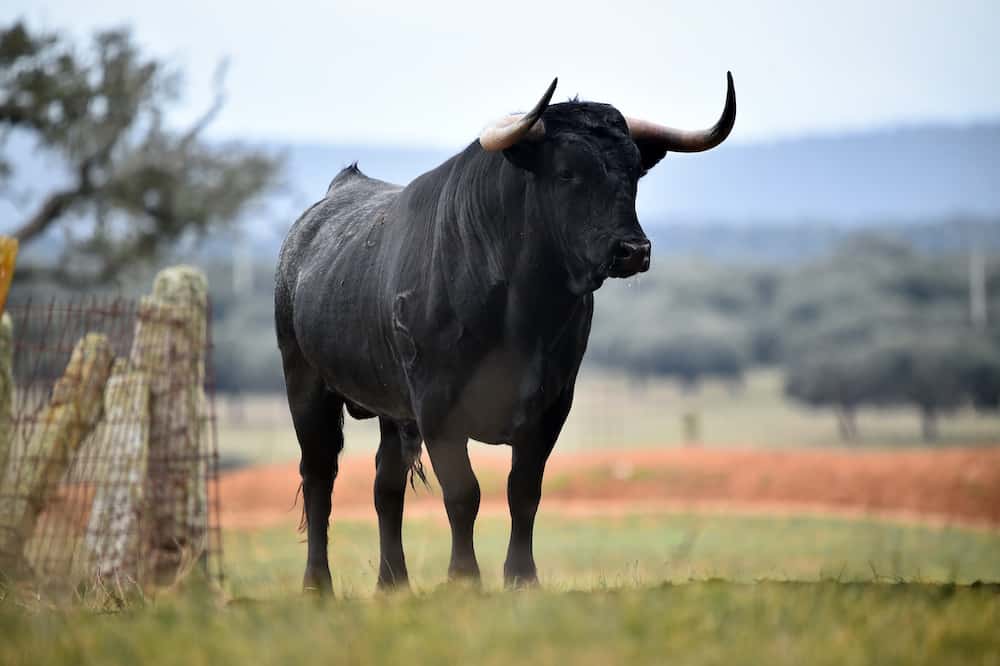 If you’re keeping bulls or thinking about it, you may wonder, “What do bulls eat?” However, knowing what a bull eats is one thing and how much to feed it is quite another. You should be aware that bull diets can vary depending on what you’re keeping them for.

So, what to feed show bulls may be slightly different from what you should feed steers sent to the market for meat.

What Do Bulls Eat?

Young bulls need to be fed properly for proper growth and development and fertility in the future. Bulls have a very diverse diet and need to eat a range of feedstuffs to meet their nutritional needs. You must feed your bull with the right types of food for their age, as well as in the right amounts.

Here’s are the recommended food for bulls:

Livestock feed contains roughage, grains, oilseeds, and byproducts. All of these ingredients are more commonly referred to as feedstuffs.

Roughages provide bulk to the diet and promote healthy bowel movement to the bull.

Aptly named, they are coarse, indigestible ingredients like hay, grass, and silage. They usually don’t provide much in the way of nutrients but contain a lot of fiber. Feeding bulls roughage provides a scratch factor. This is necessary to help keep the tissue healthy.

Silage is usually green vegetation partially fermented in an airtight container, such as a silo. It is kept warm and moist and makes up the majority of beef livestock feed. Some examples are corn silage and grass silage. You can also make silage in heaps by compressing as much oxygen out of the vegetation as possible and covering it with a plastic sheet. You could also wrap a large hay bale in plastic film.

Almost the opposite of roughages, grains provide lots of energy to the bull, but not much fiber. Common grains used in bull feeding are corn, milo, barley, and oats. You don’t need a lot of grains to fulfill a bull’s energy needs, so it’s mixed with roughage to help fill them up.

Oilseeds, such as soybeans and canola seeds, are very important in a bull’s diet since they provide energy, protein, and some fiber.

You can also feed cattle with by-products or co-products of many food items processed for human consumption. Examples of these are distiller’s grain, bakery waste, grain screenings, sweet corn cannery waste, and apple pomace.

Keep in mind, though, that you can only use sweet corn cannery waste in small quantities because of the corn’s sweetness. On the other hand, you can use other by-products, like grain screening, as fillers.

As mentioned, bull feeding will vary depending on the cattle’s age, as well as their purpose. Here are the dietary requirements for each of them:

For bulls you plan to breed, you should give young bulls plenty of protein, as studies suggest. In one study, groups of bull calves were given 70%, 100%, and 130% recommended protein between the ages of six and 25 weeks. The group given 130% protein reached puberty around one month earlier and produced 20% to 30% more sperm than the group given 70%. You’ll also need to increase your bull’s energy intake over the breeding period.

The amount of grains in a bull diet will generally increase as they get older. Adding more grains will also help them gain weight faster. For example, before you take bulls to the market, they are fed a lot of protein and fat to help finish them off. Consider protein tubs for cattle to supplement.

How Much Do Bulls Eat a Day?

How much a bull eats in a day depends on a variety of factors, including the bull’s weight, forage quality, and stage of growth or production. But generally speaking, adult bulls need to consume around 2% of their body weight, on a dry matter basis, to maintain their weight.

How Much Does a Bull Weigh?

You must know how much your bull weighs to make sure it’s getting the right amount of food. Knowing how much does a bull weighs on average can also help you work out how much it will cost to rear and keep it. Not including miniature cattle breeds, the answer is from around 1,700 to 2,400 pounds when fully grown.

A 2,300-pound bull will need around 45 pounds of dry matter comprised of 7% protein and 46% total digestible nutrients (TDN). If the bull’s body condition has slipped, add a couple of extra pounds, in food weight, and you can up the TDN to 50% to help them put on weight. You can also increase the quality of the hay you feed them.

What Do Bulls Eat for a Treat?

If you want to treat your bulls on occasion, they will appreciate many different food items. They’ll love slices of apple, potato, carrot, cabbage, cauliflower leaves, and most vegetable tops, especially root vegetables. They’ll also appreciate molasses, fireweed, clovers, and all sorts of leaves, including elder, birch, melancholy thistle, and dandelion.

What to Feed Show Bulls?

What to feed show balls is much the same as any bull, steer, or heifer, but you can add protein and fat to their diet as you see fit. Just as you would add more grains to a steer’s diet before taking him to the market, you could also do this for a bull you’re about to show.

If you plan on using the bull for breeding after the show, though, you might want to think twice about overfeeding him.  Ideally, when you breed a bull, it should have an athletic build, instead of having too much fat. Overfeeding can also lead to many health problems, including a higher risk of liver abscesses, rumenitis, laminitis, and poor semen quality.

As an example, rumenitis is an irritation or inflammation of the rumen wall. This happens as a result of long-term feeding of high grain diets. This can result in continuous acidic conditions and lack of physical stimulation or abrasion of the tissue.

So, what do bulls eat? All bulls will eat the same diet of roughages, grains, oilseeds, and by-products, but the percentage of each may change. The general rule is to feed them just under 2% of their body weight unless they’re about to go to the market. Adult bulls will typically need around 7% protein and 46% total digestible nutrients. However, growing bulls will need higher amounts of protein.