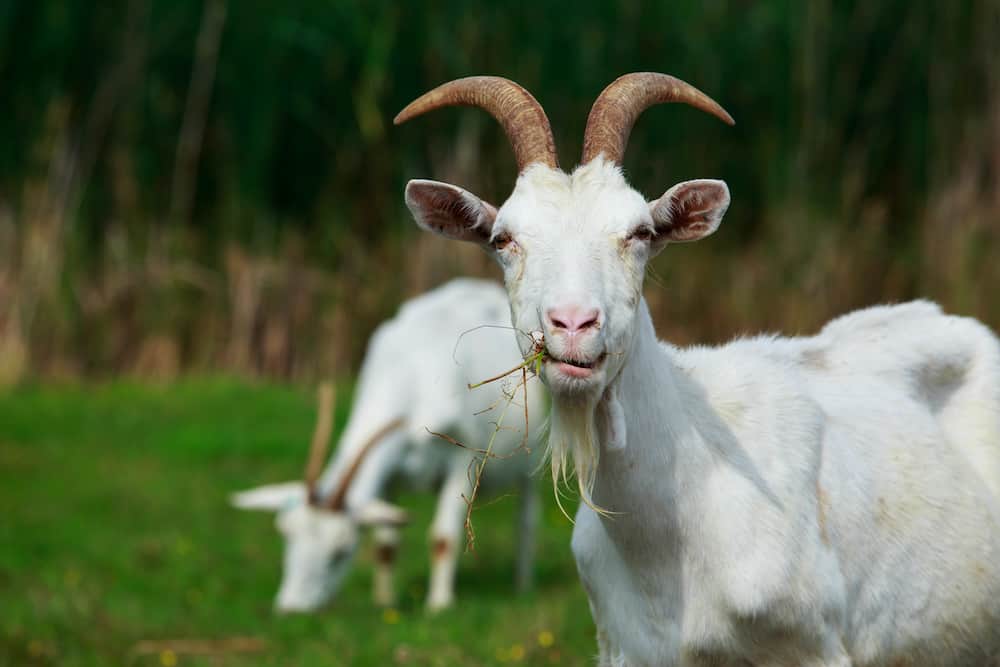 Animals with horns can be found around the world, whether at the peak of mountaintops or backyard family-owned farms.

If there’s one thing to be said about these fascinating beings, they are likely some of the most exciting and curious creatures in the entire animal kingdom.

Their fantastical headgear can be used for an assortment of tasks, whether it be to attract a mate or to defend themselves from their rivals.

What Are Horns and Antlers Made Of?

Have you ever wondered what horns and antlers are made of?

Many think that they are a combination of bone and ivory. You would be surprised to learn the vast majority of horns are made from bone and hair follicles (keratin).

These unique hair follicles are similar to what you would find in human fingernails. Meaning, horns can be a harder and more elongated version of the nails that you have on your hands.

Antlers are slightly different in the sense that their headgear is a direct extension of their skull.

You’ll mostly find antlers on male deer, and they are made from solid bone, instead of having any traces of hair follicles.

If you have ever had the chance to feel antlers, they might not appear to be bone thanks to their velvety exterior.

As the year progresses, the antlers’ velvet texture will deteriorate, causing them to become shiny and smooth.

On another note, did you also know that there are plenty of animals that have horn-like fixtures on their heads or bodies that aren’t horns or antlers?

Take the Malaysian Horned Leaf Frog, for example, it features two protruding horns from its head as well as its snout, but these features are not made from bone.

What Animals Have Horns or Antlers?

Let’s get into the list of some of the fascinating horned animals or animals with antlers so you can better identify them.

The history of the Texas Longhorn starts in North America over 500 years ago.

They have occupied many places around the world, including the Great Plains, specifically the Dakotas, Wyoming, Nebraska, and Montana.

Texas Longhorns can get as heavy as 1500 pounds and feature horns that can be up to four feet, although many are smaller.

You’ll find that they have many attractive characteristics, including being disease resistant, so they are popular farm animals.

After they have outlived their use for providing beef, many pay large sums for their skulls and horns.

Farmers can make a substantial sum by selling these fixtures as they are a part of quintessential southwestern decor.

The most useful aspect of their horns is for ranchers and farmers, as you can easily rope or hold the animal’s head.

It’s easy to spot a Boer Goat on a farm. Their contrasting red head on their white body sets them apart.

These goats were first brought to North America in 1994 from both New Zealand and Australia, becoming one of the most popular breeds to consider.

The high fertility and fast growth rate of Boer goats are just two of the reasons for their popularity.

Their meat is also quite notable, although they make fantastic family-friendly pets.

Compared to many other goat breeds, Boers are more laid back and docile, making them great for children. Others to consider are Nigerian dwarf goats.

The horns of this species are also quite small, which makes them less of a risk if you want docile farm animals.

Another unique breed of goat that is great for domesticated farms is Alpine Goat.

This breed was originally brought to North America from France, and they have a substantial production amount compared to other species.

On average, females will be no larger than 135 pounds while the males can get as large as 170 pounds.

You’ll be particularly impressed with their phenomenal milk production if you have female Alpine goats.

Overall, they’re a fantastic choice for farms since they thrive in several climates and maintain high levels of production.

Similar to Boer goats, you’ll find Alpines have smaller horns compared to many other wild animals.

They likely won’t pose a threat to you or any other animals on the farm.

Highland Cattle aren’t nearly as large as Texas Longhorns, as fully mature bulls can only get up to 800 pounds.

One of the most exciting features of this species is that it is the oldest registered breed in the world.

Also, they can be used for beef production but also produce a small amount of milk with high butterfat content.

The distinctive horns on Highland cattle make them easy to tell apart from other livestock breeds.

They also prove to be quite useful to animals during the winter.

They use their horns to forage through snowy climates by digging into the pastures.

However, farmers may find it quite challenging to manage if they keep them close to other farm animals on their property.

Jacob Sheep will have a unique black and white coat that can be thick and burly.

Their horns are quite notable as well. They will likely have four of them compared to other animals who have only two.

Interestingly enough, there are many Jacob sheep who have six horns, which is an incredible evolutionary feat.

Their horns are small and curved, and both male and female sheep will have them, with the male’s horns being far more formidable.

This species was first brought to North America in the middle of the 1900s and is quite popular among weavers, hand spinners, and flock holders.

You can easily spot Manx Loaghtan if you visit the Isle of Man of Great Britain’s coast.

They are similar to the Hebridean sheep, as discussed below, but they are more massive.

With a beautiful coat that is a mixture of chocolate and pale browns, they’re quite noticeable.

Most of the Manx Loaghtan you will come across will have four horns, but there are plenty with two.

Similar to the Jacob sheep, some varieties may have up to six horns, with both ewes and males having them.

You can typically tell the genders apart as the males will have more substantial and robust horns than the females.

An interesting fact about Manx Loaghtan is that their meat is protected by European law, as it is a delicacy.

Another fascinating multi-horned species of farm animals are Hebridean Sheep, who hails from Scotland.

As earlier mentioned, they are similar to Manx Loaghtan in that their horns are very alike in appearance.

You can easily find four-horned rams, while others may have two or six.

Hebridean sheep are a fantastic investment for hand spinners searching for fleece with subtle variations in shades.

They are also highly recommended for conservation grazing for maintaining grasslands and heathlands.

Farmers will also appreciate this species of sheep for their meat, as it is incredibly delicious.

The dark meat they provide has a rich and supple texture that is perfect for those looking for a delicious meal.

As an added benefit, it has lower fat content than other types of meat, which lowers its cholesterol.

Also, they’re often the only choice for low-input farming located in harsh environments, as they’re ideal for land management. 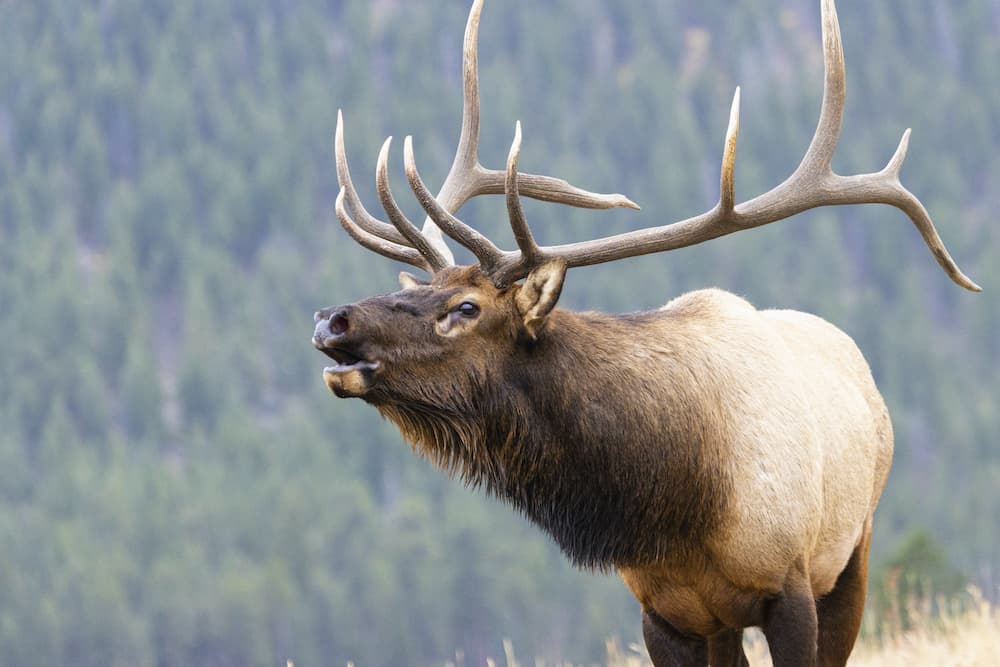 Many are easily accessible around the world.

Easily identifiable in North America, there are four species of Elk that you can find, including Tule, Manitoban, Roosevelt, and Rocky Mountain.

The antlers on an elk can grow up to one inch each day, making it the fastest growing animal tissue in the world.

Unlike many others, elk use their antlers primarily when mating season is around the corner.

You’ll find that in the fall, bulls will spar using their antlers to find the appropriate female elk, also known as cows, to mate with.

You can also use their antlers as an indicator of their abilities and health. Those with the most massive antlers are known to be the strongest and will have the most energy.

Deer is a rather large group of animals as it encompasses 50 species, including Caribou, Elk, Moose, Wapiti, and Muntjacs.

You can find deer in an assortment of sizes and weights, with the smallest species being the Southern Pudu. It weighs only 20 pounds when fully grown.

Some species are so family-friendly and calm that they would make the perfect animal therapy companions, primarily as they can be domesticated for some farms.

Similar to elk and other species, deer will commonly use their antlers when it comes time to rut by rubbing them against trees to assert their dominance.

They will also use them to draw males to the area so they can begin sparring to find the most appropriate mate.

Their antlers can also be used as a defense mechanism from predators in their environments.

1. Do female animals have horns?

In some circles, there appears to be a debate that only male hoofed animals have horns.

In reality, some female animals have horns for similar reasons to their male counterparts.

Female hoofed animals that can’t hide in cover at any given moment and are responsible for defending territory, such as feeding grounds, will have horns compared to those who don’t have those responsibilities.

Biologist Ted Stankowich has determined that there are up to 82 species of female bovids that have horns.

2. Which animals have horns?

There is an incredible number of horned animals, including the following:

3. What animals have small horns?

The vast majority of animals that have horns will have large ones, as they are typically used for establishing their dominance.

Imagine if animals had small horns. Their sparring wouldn’t be able to attract females come mating season, nor would it be an impressive show of superiority.

Most often, animals will have smaller horns when they are younger; they grow more significant over time.

4. What animal has straight horns?

The most distinctive animal with straight horns is undoubtedly the Oryx.

They rarely have a curve to their length and stick out straight from the back of the skull-like sharp sticks.

The Importance of Antlers and Horns

From the Great Kudu to Caribou, animals with antlers and horns rely on them to assist with crucial tasks, such as defending themselves.

Although the two differ significantly in how they are made from their hosts’ bodies, they are equally as essential to any two species you could compare.

It’s also important to note that the importance of antlers and horns can put the species in danger.

Many civilizations believe they can be used for medicinal purposes.

Generally, the larger an animal’s horns or antlers, the more medicinal power they are expected to have, which isn’t always the case.

Conservation for animals with horns is essential, as many are beginning to decline in areas around the world, threatening their existence.