Knowing the difference between sheep and goats will help you decide which type of livestock to choose for your farm. When choosing between sheep and goats, it’s important to consider the environmental conditions in which they’ll thrive in. This way, it will be easier to care for them, prevent diseases, and more.

What Is the Difference Between Sheep and Goats?

While most people know that these two animals are very different, specific differences are harder to pinpoint, especially for the untrained eyes. Below are some of the most significant physical, biological, and personality differences between the two animals.

There are a number of physical and biological differences when comparing sheep vs goats, including:

The actual scientific classification of sheep and goats is different. Taxonomy is based on chromosomes, physical, and biological differences. Sheep and goats each have their own distinct species and genus, and there are different subspecies of both.

The upper lip of sheep has a separation known as a distinct philtrum, while the goat does not have it. This upper lip feature will help you differentiate them just by looking at their faces.

Many types of sheep are woolly, and their coats require shearing each year. On the contrary, goats usually have hair coats that do not need regular cutting or shearing. Another significant difference in terms of hair is that some sheep may have manes, while some goats may have beards.

After sheering a sheep, especially when they are clean-faced and clean-legged, some sheep breeds can resemble goats.

More often than not, goats have horns that are usually narrower and straighter than sheep horns. Sheep horns are often thick, curvy, and looped, but not all sheep varieties have horns. Compare rams vs goats to learn more comparisons about horns and more. Animals with horns

While goats and sheep are around the same size in terms of height and length, goats are usually slimmer than sheep. You could describe goats as more compact than sheep. With their wooly coats and how their body processes food, sheep tend to have more meat on their loins and backs.

On the contrary, goats do not gain fat in the same areas as sheep do, making sheep generally heavier than goats.

Goats are usually considered more independent, curious, and troublesome since they love to explore. They are very curious about their surroundings and will interact with their environment to a high degree.

Sheep are more mellow than goats since they prefer to eat what is on the ground and only graze to eat what they can see there.

All goat breeds are more agile than sheep, so they tend to climb areas that sheep cannot reach. That can lead to some interesting situations that give goats the personality that they are known for by most homesteaders.

In the wild, goat varieties typically live in herds of around 20 heads. Herds can be larger than this when they are on a farm, but they can also be smaller.

If you are planning to keep goats, it is a good idea to have at least two goats so that they can stick together. Goats will amuse each other, play together, and also seek each other for warmth.

On the other hand, sheep will start to act as a flock once there are at least four of them on the farm or wild. Sheep have a powerful flocking instinct. They prefer to stick together for protection and may become stressed when alone, though there are some sheep who may prefer to be independent.

Being very social creatures, sheep herds can get very large. Sheep herds are also divided by gender. Males will usually create their own herds of five to 50 sheep.

If you plan to own sheep, it’s best to start with two ewes per acre of land. Sheep will benefit from having another of their own species around for company and for protection. It’s important to have enough property for how many sheep you keep. Learn what other factors affect how many sheep per acre so they are healthy.

Are Sheep and Goats the Same in Terms of Foraging Habits?

It’s not just looks, personality, and herd size that can separate these two animals. Their foraging habits create a distinct difference, as well.

Grazing behavior is typical for pasture animals like sheep. Sheep graze and likes to eat short plants that are very close to the ground. Sheep usually graze while wandering around slowly. They also prefer to eat grass and tender clover. As such, keeping grass length short is necessary when owning or caring for sheep.

In comparison, goats look for things at eye level and higher. They’ll seek out leaves, branches, twigs, bushes, shrubs, vines, and more. Goats investigate their surroundings more because of how they browse for food.

Since goats are very agile, they can stand on their hind legs while seeking out food. With this behavior, their diet is generally more nutritious than that of a sheep.

The variety of food items that goats eat is something that they are well-known for. In fact, goats may even try to eat things like your clothes at times!

Their smell can also help you identify between goats and sheep. Although sexually mature males of both species create very noticeable smells, the odor of male sheep is nothing compared to the strength of the smell that male goats (bucks) give off. However, wether goats do not smell.

This smell is known for being incredibly pungent, and it is something that you have to get accustomed to if you plan to own bucks. The smell is worst during the breeding season.

On the other hand, female sheep and goats have similar scents. At times, their smell will also be based on how you care for them and clean up space around them. 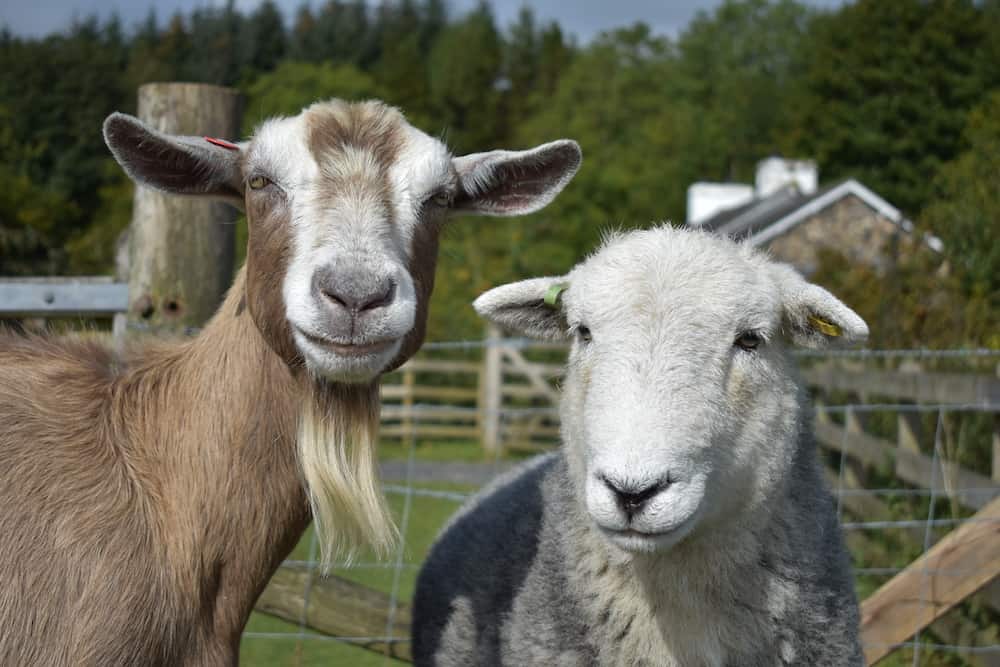 Sheep, including the rams and ewes, are generally easier to handle and more robust than goats, but they don’t provide the same kind of cleanup that goats can help with. Still, they handle cold weather better and don’t get diseases as easily. For hot and humid weather, though, goats may do a bit better.

Sheep have a more difficult time cooling down because of their wooly coats, but you can help them through a well-timed shearing.

When it comes to answering “What is the difference between a sheep and a goat in terms of health issues?”, both are prone to parasitic infections. These infections require immediate medical attention; otherwise, they would lead to animal’s death or infection of the uninfected ones.

You must also be mindful of footrot and foot scald, which are bacterial infections affecting the animal’s hoof. Footrot infection severely affects sheep. In goats, foot scald is more common. Nonetheless both infections are expensive and time-consuming to treat.

Your goat or sheep’s susceptibility to these infections depends on several factors, including age, nutrition, environmental conditions, and genetics.

Both animals require a lot of work, so make sure you prepare well. Provide them with the right living arrangements, food and nutrition, veterinarian care, and more.

Difference Between Sheep and Goats

Which are smarter? Many people want to know which animal is smarter when making their selection between goat vs sheep. Many people tend to assume that sheep are less intelligent than goats because sheep exhibit what is known as flock behavior.

Sheep act as a social group, and their reactions are very dependent on others in their flock, while goats tend to be more independent.

Even when goats are grouped together, they will show individual curiosities. That said, sheep raised on their own or in pairs can often show just as much inquisitiveness as goats. Ultimately, the environment will decide this, so one animal isn’t clearly smarter than the other.

Which Is Better Sheep or Goats?

It has been said that shepherds protect sheep from getting injured by their environment, while goatherds protect the environment from their goats. While a very simplified conclusion, this is one way to put the difference between sheep and goats.

Both animals have their uses. They are both productive animals. You can also raise them on a farm or a homestead with relative ease.

Ultimately, which animal is best for your needs will depend on what you are looking for from the livestock. So, think about what you want to raise the livestock for and start from there.

Whether you are looking to raise them for milk, meat, fibers or something else, your choice will depend on your goals. Raising goats for profit

Once you decide on your purpose for raising the animal and time you can commit, then you can get into the nuances. As an example, if you want to raise dairy goats, consider if you want to make cheese. If so, you would consider raising a Nubian goat herd.

It’s important to know the difference between goats and sheep so you can choose which is best for your farm. There isn’t one animal that is better than the other; just choose based on your personal preferences and what you hope to gain from raising them. You could even keep both! They will get along well together.

Some goat and sheep breeds to consider raising:

How long are goats pregnant