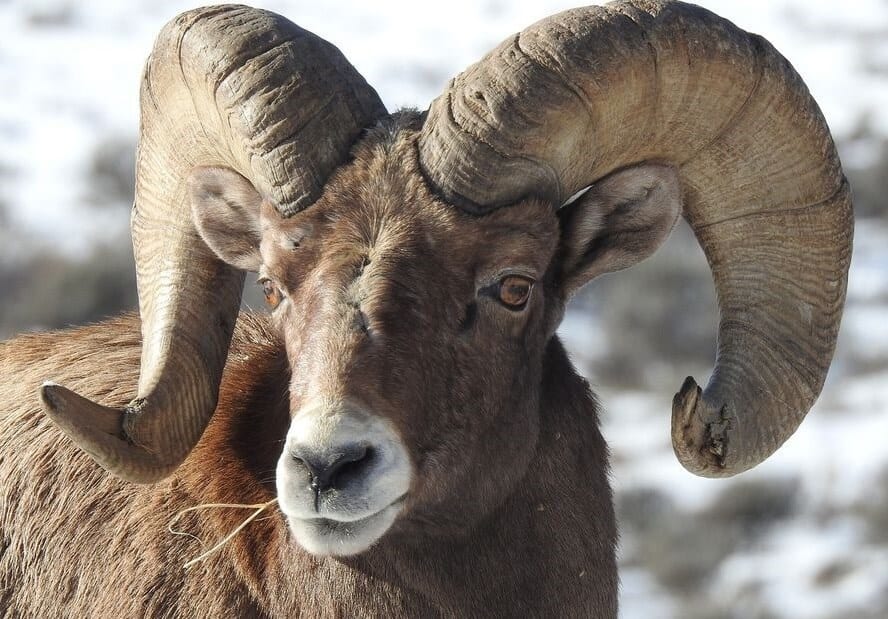 In a ram vs goat fight, there’s a good chance that the ram comes out on top. This is because rams tend to be bulkier in size and, in many cases, stronger. These are just some of the many differences between rams and goats.

In many places, the two names may be used interchangeably, albeit incorrectly. For clarification, let’s look closely at both a ram and goat. Here, we will highlight all the key differences between a ram vs goat and even some subtle yet interesting facts about both farm animals that you might want to know.

How to Describe a Ram

The simplest way to describe a ram is that it’s a male sheep. However, not every male sheep can be called a ram. A ram is a male sheep that is at least 12 months old. In most cases, a ram is big, heavily built, and has curvy horns and distinctive testicles. It’s safe to say that the best rams within any flock are the dominating male sheep on the farm.

Sheep and goats may look similar and were some of the earliest animals to be domesticated around 10,000 years ago. They are, however, from different families. Sheep come from the Ovis aries, while goats come from the Capra aegagrus hircus family.

When they are young, it’s difficult to differentiate between a male sheep (ram) and a female sheep (ewe). The differences in physical appearance come into play much later, once the animals get older.

At around 12 months of age, rams become much bigger and grow horns. Rams often have longer horns than their male goat counterparts—bucks or Billy. The horns of a ram are often curved backward and are quite tough.

Besides that, rams get big and become quite aggressive, especially during the breeding season. It’s not uncommon to find rams that weigh more than 390 pounds, although this size depends on the sheep breed.

Here are a few fun facts about rams that might interest you:

How to Describe a Goat

Goats belong to the Capra aegagrus hircus. Like sheep, they are either domesticated farm animals or wild goats, such as the West Asian ibex or the mountain goat. Goats have been domesticated for about as long as sheep.

Domesticating goats made a lot of sense for several reasons:

While goats are often confused with rams, there are some distinct differences in their anatomy and behavior. For starters, male goats are called Billy goats or bucks. While wild male goats can get big and muscular, they hardly get as big as rams.

Billy goats, like sheep, become aggressive during mating season and fight other bucks for access to as many female goats as possible.

Differences Between a Ram and a Goat

A ram and a goat are different animals. However, for better clarification, let’s look at key differences that will help you immediately differentiate one from the other.

Sheep tend to be bigger in size and appearance than goats. Depending on the domestic sheep species, a fully grown adult ram could be as tall as 6 feet and weigh around 390 pounds. They get even bigger when you start considering wild rams.

Goats, in general, aren’t as big. They tend to appear to be smaller and much lighter than sheep. Even though it’s not uncommon to find a male goat just as tall as a ram, these animals tend to be lighter. Mature Nubian goat males can weigh between 100 – 250 pounds. However, the largest goat breed, Boer goats are larger. A mature Boer buck can weigh 240 – 300 pounds.

One of the easiest differences to spot is the skin or hide covering. Sheep tend to have woolly skin, while goats have skin that has thin fur covering their bodies.

Goats also tend to have a goatee, while most rams don’t. This is yet another reason why sheep often appear much bigger than goats. The wool on their hide makes them look fluffy and larger.

While both are typically horned animals, the shape and size of their horns tend to differ. Rams have large horns that tend to face backward from their faces, while Billy goats have slightly smaller horns that grow straight up.

Like many animals with horns, both animals use their horns to fight and defend their territories, the sheep horn is more effective as it’s tough and heavy.

Goats are surprisingly intelligent and social animals. They are quite sophisticated and have a great memory. Their curious nature makes them a joy to have around the farm, especially if you have kids around.

Rams, on the other hand, are technically mountain sheep indigenous to North America. These creatures are very loyal to their territories, making them quite aggressive.

They are fast, tough, and not afraid to “ram” anyone and anything in their path. This makes them a little problematic around the farm, as they have been known to ram people, other animals, and even children.

Both these creatures are ruminant mammals. However, their foraging habits differ greatly. Goats, being naturally curious creatures, are browsers who thrive on leaves, bushes, shrubs, and trees.

They are picky when it comes to their food and, as such, won’t eat anything they find on their pasture. That’s one of the main reasons they are called browsers—they take their time picking and choosing what to eat.

Rams, on the other hand, are known as grazers. They prefer feeding on short, tender grass close to the ground. They aren’t as adventurous nor as picky as goats.

While the meat from both animals is considered delicious across the globe, they both have a distinct flavor that takes some getting used to, especially if you are only used to eating beef.

They may look relatively similar, but a ram and a goat are very different creatures. However, both are wonderful and potentially profitable farm animals to keep.

Can a ram impregnate a female goat and vice versa?

While a ram can mount a female goat depending on the situation and how aggressive the particular ram is, a sheep-goat hybrid is highly unlikely because both animals have different numbers of chromosomes, which makes a successful pregnancy highly unlikely.

What is a male goat called?

What is a baby goat called?