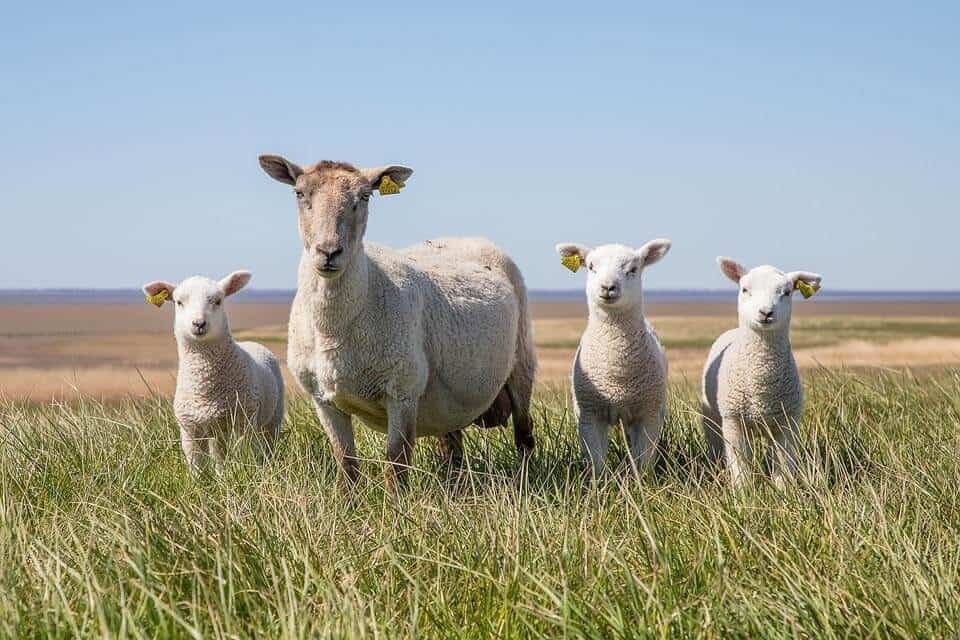 Learn all the differences between lamb vs sheep. Sheep were among the first and most successfully domesticated animals across the globe. Human beings have been rearing sheep for thousands of years for their meat production, milk, and skin. Domesticated sheep are the most useful domestic animals on any farm.

Most people, however, prefer the taste of lamb to that of sheep. So, what is the difference between a lamb and a sheep?

While they are the same species, there are many differences between a lamb and a sheep. In addition to their age, their size, meat, skin (lamb skin vs sheep skin), leather, personality, nutrition and dietary needs differ. Learn more below.

When Does a Lamb Become a Sheep?

A lamb becomes a sheep as soon as it gets past the twelfth month. Therefore, a young lamb is a sheep under one year of age. After a year, it becomes a mature sheep.

Even though the biggest difference between a lamb and a sheep is nothing but age, there are some peculiarities that you need to know. Despite being the same animal, these peculiarities are exactly what makes lambs more popular than sheep.

What’s the Difference Between Lamb and Sheep

Today, there are about a billion domesticated lambs and sheep across the globe. There are also quite several wild ones too. Wild sheep species include:

Among the most common domesticated sheep species are:

Each and every one of these sheep species has its own lambs, which come with a host of characteristics that differentiate them from the sheep. With that in mind, here are some of the key peculiarities that will help tell the difference between lamb and sheep.

Since lambs are just sheep under a year old, they tend to be much smaller and weigh less than adult sheep. A typical lamb could weigh anything between 5 and 10 pounds at birth. On the other hand, adult sheep are much larger, while wild ones are still larger.

One of the largest sheep species in the world is the Argali. It is a wild sheep found in Mongolia. These sheep can grow up to four feet tall and weigh as much as 700 lbs. Suffice it to say that domesticated sheep hardly ever get to such heights. A typical adult sheep can weigh around 350 lbs.

This is one of the main reasons why the difference between lamb and sheep is even a topic of discussion. Apart from the fact that lambs tend to be cute and cuddly, they also tend to be quite tasty, with exceptionally tender meat.

Lamb meat is simply called lamb, while sheep meat is called mutton. Mutton meat tends to contain more fat content and has an intense red meat color and a much stronger flavor than lamb. Lamb tends to be pale pink and has a mild flavor.

Since lamb meat is tender, moist, fine-grained, and not quite as intense as mutton meat, it’s a favorite of many households, which makes lamb more expensive than mutton meat. Whenever you go for lamb, you have several options from which you can choose.

You can either go for a milk-fed lamb, which means that you will be eating a lamb that has yet to be weaned. This kind of meat comes from lamb about 4–6 weeks old and weighs about 13–18 lbs.

Even though this kind of meat isn’t commonly available in many places, its flavor and texture are considered fine and better than older lambs. It’s particularly good when roasted or grilled. This kind of lamb tends to retail at much higher prices, especially during the Easter period when it’s a favorite for spit roasting.

The next best option is a spring lamb, which is also milk-fed but aged between three and five months. This lamb tends to be born either in early spring or late winter. They are quite popular in July.

Yearling mutton is another option and comes from the flesh of a mature ram or ewe at least one year of age. The meat of a sheep between 12 and 20 months old is often referred to as yearling mutton.

The next option on the list is a sucker lamb. This lamb is also milk-fed but slightly older than the other two. Sucker lambs tend to be about seven months old and still drinking their mothers’ milk. These lambs tend to have more meat and can give up to 66 pounds of delicious meat. Finally, older lambs nearing the year mark are often referred to as “old-season lambs.”

In many cases, people can’t distinguish between lambskin and sheepskin. That’s why you will often find these terms used interchangeably. Lambskin and sometimes sheepskin is used to make belts, hats, bags, shoes, purses, etc.

When you remove the fur from both sheepskin and lambskin, you are left with sheep leather and lamb leather, respectively. Since lamb leather is smoother and softer, it’s used in apparel such as jackets, pants, coats, and dresses.

Sheep’s leather, on the other hand, can be used in making book covers and leather accessories. Sheep leather tends to be quite sturdy and, as such, is often used in making furniture.

Since they are much younger, lambs tend to be gentler and friendlier than sheep. They can also be quite playful and easily form bonds with their human owners, especially if they are bottle-fed from a tender age. Lambs get along well with other farm animals. In many cases, lambs can be kept as pets because of their gentle nature.

Sheep, on the other hand, tend to be gentle in general. However, they can be rather temperamental from time to time, especially when they feel threatened for one reason or another. Unlike lambs, sheep aren’t that cuddly and aren’t often kept as pets.

Lamb vs Sheep: Nutrition and Diet

Being herbivorous creatures, sheep depend mainly on grass and a host of other plants for sustenance. Professional sheep herders do more than provide their sheep with pasture and enough grass to eat. They also provide vitamins and supplements as directed by their qualified veterinarian when necessary. These kinds of supplements help improve the sheep’s health.

Lambs, on the other hand, survive solely on milk. In many cases, lambs will be sustained by the milk they get from their mothers. However, in some cases, where the mother is either unavailable or doesn’t provide enough milk for her young, lambs can be bottle-fed.

Why Breed Sheep and Lamb?

The answer to this question will depend on your primary objective and which animal you are looking to breed in particular. As we have mentioned, lambs tend to be cute and cuddly. As such, it’s not unheard of for people to raise lambs as pets.

However, that isn’t the primary reason why millions of people around the globe raise sheep. Here are some reasons why you should consider breeding sheep and lambs.

A lamb and a sheep are the same animals at different stages of their lives. Each has its own unique benefits and can help diversify your homestead or small farm. Sheep & lambs are both excellent livestock to keep.

Learn the difference between sheep and goats and which is right for your homestead or small farm.