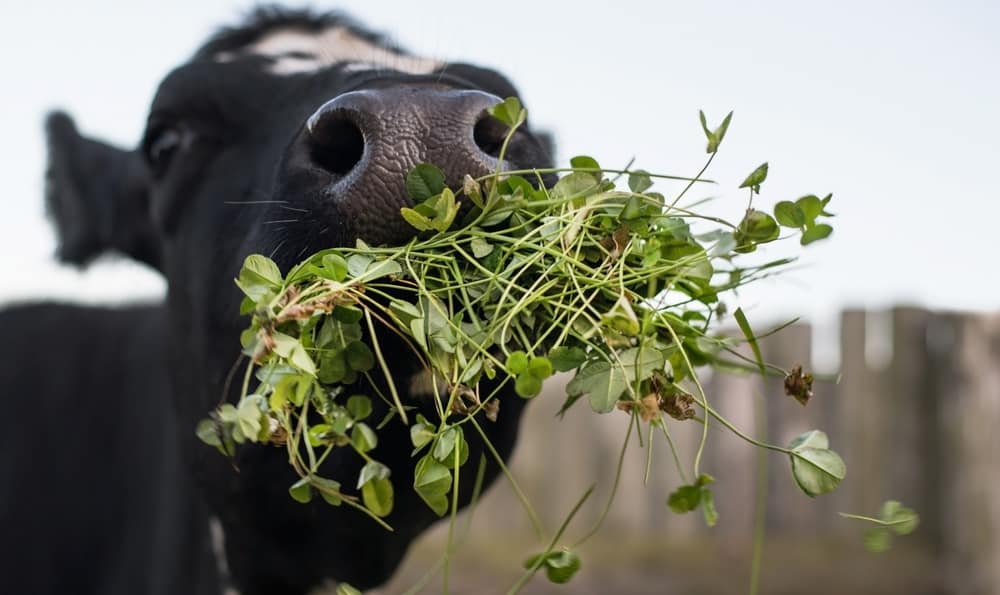 What does clover do to cattle? You may be wondering, can your cow eat clover? If so, how much? Or perhaps you’re wondering, “How much clover can I feed my cow?” Clover is a short-lived herb located in temperate and subtropical areas, particularly in Australia and Southeast Asia. This low-cost crop is ideal for grass pasture and beneficial as it strengthens damaged soil.

Here are some tips to keep in mind before feeding cows clover as there are a few pros and several cons. This is a comprehensive guide on feeding clover, members of the genus Trifolium, by learning about the kinds of clover and associated dangers.

The answer to this question is a resounding yes! It is safe for cows to eat clover in moderate amounts. However, professionals suggest that you feed the clover to your animal in intermittent doses, not as a single feeding. Cows may adjust to a new type of feed slowly, so changing it around every few weeks will be most effective.

Common varieties of clover, such as red clover and white clover are very palatable and can provide high quality protein to cattle at a low cost.

In addition, red clovers can be an excellent alternative to synthetic bactericides used in cattle feed.  Microbiologists determined that it will reduce hyper-ammonia-producing bacteria that live in cattle rumen. (Located on the left side of the animal, cattle rumen is the first chamber of a ruminant animal’s digestive tract.)

This bacteria decreases the quantity of dietary protein that the cattle can absorb through digestion. This results in losses in their growth and overall performance. When you add clover to a cow’s diet, compounds called isoflavones improve the quality and quantity of protein available to them.

What Does Clover Do to Cattle?

However, there are some downsides with clover. Wet clover in hay can cause mold, which inhibits the production of vitamin K. Deficiency of this vitamin can lead to fatal internal bleeding in all mammals, including humans. And, in addition to being a potential hazard to cows, moldy sweet clover hay can also cause mold and bloat.

If clover is in the hay, it can cause mold, which is highly toxic for humans, which is why farmers should avoid adding clover to hay bales and always make sure the clover is dry before packing it. It is also important to rotate cattle through clover fields periodically to ensure the health of their animals.

Another thing clover does to cattle is cause sweet clover disease and sweet clover poisoning. This is a concern when hay isn’t cured properly. This can result in cows hemorrhaging. Symptoms include blood clots, stiffness or lameness, and more.

What is Pasture Bloat?

Pasture bloat is a digestive disorder in cattle grazing on pastures containing more than 50% legumes (Sweet clover). Bloating from pasture occurs when the cow’s rumen (one of its stomachs) is filled with gas. A high clover content in hay creates an abundance of foam, making it difficult for cattle to let out gas.

How is Clover Bad for Cows?

Crimson and red clover have been identified as moderately likely to promote bloat, but in contrast to white clover, the chance of bloat resulting from red and Crimson clover is low.

Red clover contains chemicals called isoflavones, which are phytoestrogens with anti-estrogens, which affect the breeding ability of cattle.

Crimson clover is associated with bloating due to large amounts of indigestible fiber. However, no other adverse effects of the crimson clover have been identified in addition to pasture bloat.

Here are some of the most effective treatments.

Sweet clover is part of sedges and grasses, and legumes, and on rangeland or pasture. Although, the clover is a typical forage legume that contains Coumarin, which causes problems.

It is not toxic in its own right except if the plant is spoiled or damaged. Coumarin converts into dicoumarol when there is an abundance of molds. When the cattle eat moldy sweet clover hay, the dicoumarol inhibits the production of vitamin K.

improperly cured hay made from white and yellow sweet clover can cause severe and sometimes fatal hemorrhages in cattle.

The symptoms are based on the amount of food consumed and the health and health of an animal. In the case of a small amount of intake, symptoms might take a few months to manifest. However, if the cattle consume dicoumarol in large quantities, the symptoms will appear within less than one month.

Symptoms consist of stiffness, an irritable attitude, swelling, and pale gums visible beneath the skin and around the hips, neck, and brisket. Other symptoms are blood dripping from the nose or visible in urine and feces.

Injecting K3 intravenously every day for four days can increase the creation of protein-based blood clotting.

One of the legumes with the most significant probability of bloat is Persian and white clover. As a result, farmers report massive livestock losses due to pasture bloat.

Pasture bloat is a serious gastric disorder that leads to cattle deaths within three to four hours after symptoms begin to manifest in the absence of treatment. Abdominal distention on the left is a common and clear indicator of the disease

Following are some of the most effective treatments.

Management in Feeding Clover to Cows

Managing the risks associated with bloat based on sweet clover is critical. The presence of dicoumarol is a concern during wetter hay seasons, and it does not diminish over time.

But you cannot ignore the financial advantages of feeding clover in pastures. Despite the risk of bloat, feeding sweet clover to cows can save farmers money in the long run.

Remember that sweet clover contains Coumarin, which transforms into dicoumarol when in the presence of mold. If cows consume dicoumarol, it hinders vitamin K, which is vital for blood clotting. So, K inhibition can cause the demise of your animal.

While some producers fear bloat in cattle, animal bloat is rare when clovers account for less than 50% of dry forage matter.

Sweet clover is a pliable plant that benefits from favorable conditions for growth. So, if controlled and treated, it could be an adequate food source. Rotating feed is another efficient method. For example, you can use sweet clover and hay for 15 days and then safe forage the following 15 days as a feed. Then, re-rotate this to reduce the risk.

It is important to consider what does clover do to cattle. Whether you are raising beef cattle or mini milking cows, etc., you must keep in mind the disadvantages and risks that may arise when cattle graze on pastures with clover. The more legumes are present, the riskier. In cattle hay, a contaminated clover can be deadly for animals. Photosensitization, bloat in the pasture, and slowed vitamin K production are just a few of its numerous effects.

To conclude, feeding clover to cattle can have many benefits. Along with a healthy diet, it provides nutrition and can help farmers save money on feed. Clover can be an excellent food source if you feed cows with care. If you are raising beef cattle, consider protein tubs for cattle which can help supplement nutrients when the forage quality declines.

Learn more about raising cows and providing shelter for them with a cattle shed.

Learn about raising cattle on your homestead. Some breeds to consider are: