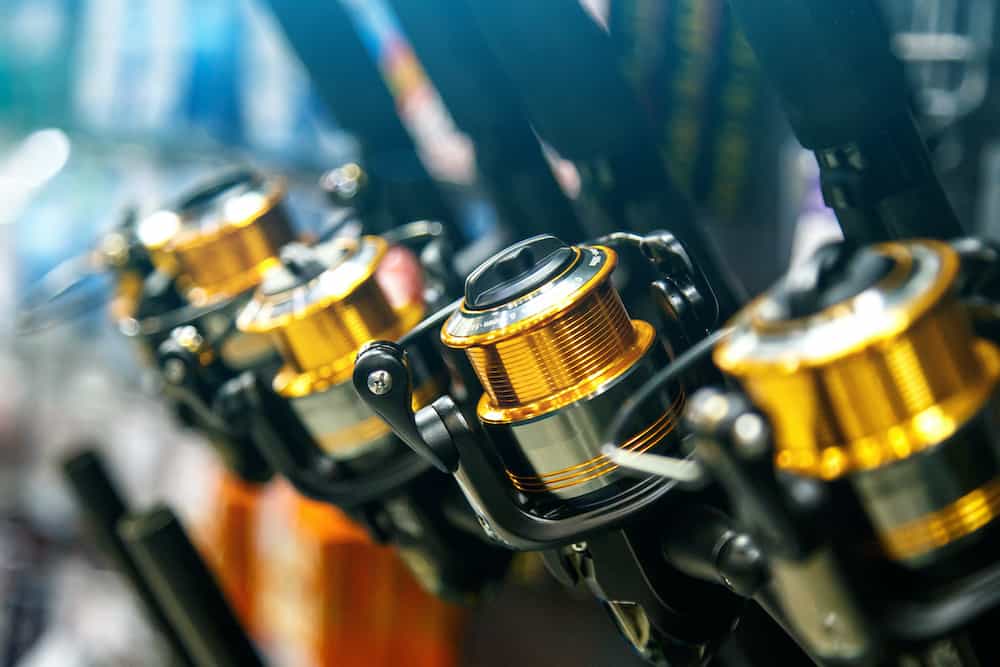 As you become experienced fishing, it’s important to consider the types of fishing reels.

We explain the types of fishing reels and what kind of fishing they’re best suited for so that you know which one to pick.

There are eight different types of fishing reels you may come across when you start shopping for the right one for your needs.

We’ll start with the spincast reel since it’s often one of the most affordable options. It’s also widely considered to be the simplest and easiest reel to use.

This type of reel used to be popular a couple of decades ago, but, for some reason, you don’t see them that much these days.

The spincast reel is also known as a closed-faced reel since its parts are hidden under a nose cone.

With its low cost and simplicity of use, the spincast reel is an excellent choice for first-time anglers.

More often than not, it’s also the reel you’ll encounter on children’s rods to get them started.

With just a push-button for casting and a drag adjustment mechanism, this reel couldn’t be designed any simpler for inexperienced anglers.

To fish, you just set your drag to the resistance level you want it at and press and hold the button while you cast. Once the line is out where you want it, push the button again to stop the line from feeding, and that’s it.

Another good thing about this reel is that you can use it for most types of fishing.

However, it isn’t easy to cast accurately. Spincast reels also don’t hold much string, and they’re not very durable.

The spinning reel or open-faced reel is probably the most popular type of reel.

Spin fishing is also one of the easiest types of fishing, being just slightly more complicated than a spincast.

Instead of having a button to control the string release, there is a metal bail that locks the line in place and prevents it from unspooling.

Hence, casting with this type of reel is really easy since you just need to open the bail while holding the string in place with your finger.

Then swing and cast, releasing the string around halfway through the forward motion. Once your lure or bait is out where you want it, close the bail and wait for the fish to bite.

Spinning reels perform best with light and medium-weight lures and spinners, whereas they might struggle with heavier gear or those used for bigger fish species.

Unfortunately, spinning reels are prone to line tangling, or as known in the fishing world, “birds-nesting”.

That said, you can cast some impressive distances with these reels. They’re a great middle-ground for most people.

With baitcasters, you can cast greater distances. They also offer more control and accuracy than spinning reels. They have a very sturdy build and can hold a heavy fishing line, making them ideal for catching large game fish.

It is a famous reel type, but mostly among experienced anglers due to the skill involved in using it and the heftier price tag.

They’re tricky to use because they have more adjustable parts on them, allowing you to control the speed at which the line goes out.

Therefore, a baitcaster reel will take some patience and practice to get used to it and finding all the right settings for different weight lures.

Baitcasters don’t have a bail, so when you cast, you release a clip and use your thumb against the line and spool to control the distance. Press the clip to lock the line, and you can start fishing.

Fly fishing reels offer the most accurate casting of all. In fly fishing, the fishing line’s weight is what carries your lure out, as opposed to the baitcaster and spinner that rely on the lure weight.

Fly fishing uses a very light lure that sits on top of the water to trick the fish into thinking it’s an insect that has just landed.

Most commonly used on moving water, fly fishing for trout and salmon can be enjoyable.

Fly fishing reels are best suited for lightweight rods since you’ll be casting a lot. They’re simply made, reliable, and very durable and could make an ideal one-off investment if you have salmon swimming near you every fall.

Fly fishing will require a lot of practice, though, because it is quite hard to learn.

Surf fishing reels can be baitcasters or spinning reels, but they’ll possess some qualities that make them more suitable for ocean fishing.

The first thing they need is maximum corrosion resistance from the salt, sand, and sun. That is why anodized aluminum and graphite are popular materials used in constructing them.

They also usually have sealed stainless steel bearings. They also need to be durable to withstand the surf, as well as be able to hold a lot of line for long casts.

Offshore reels are usually more expensive than other reels. They also can be either baitcasters or spinners.

They’re built to be extremely tough not only to withstand harsh offshore conditions but also to catch monster-sized fish.

Trolling reels are also known as conventional reels and are used on boats to catch big game and deep-sea fish. They can handle heavy fishing lines and a lot more, allowing you prolonged fishing battles with powerful fish.

They also often have a loud clicker for you to hear the line being dragged out by a fish over the boat engine.

The centerpin reel is one of the oldest types of fishing reels but is still widely used by anglers who fish the rivers around the Great Lakes.

They look like fly fishing reels, but they usually don’t have a mechanical drag function. As such, you need to control the resistance with your thumb.

They’re good for long-distance casting and are mostly teamed with bobbers that float your lure downstream. They’re also great for float-fishing both salmon and steelhead.

What Are the 4 Types of Reels?

The extra reels featured above are mostly variations of the baitcaster and spinning reel.

What Is the Difference Between Fishing Reels?

There are many differences between the reels, including ease of use, price, casting accuracy, and distance. When choosing which one to get, decide what fish you want to catch and what your budget is, then go from there.

If you’ve never fished before and want the most versatile option, we recommend investing in a spinning reel.

What Is the Best Type of Reel?

Choosing the best type of reel for you will require that you ask a few questions, such as:

1. How Easy Is the Fishing Reel to Use?

Some fishing reel types, like fly-fishing and baitcasters, are more challenging to operate than others, so they require greater skill and practice.

If fly fishing is the only option for fishing in the area you live in, you wouldn’t have a choice but to go for it.

As we said previously, though, it’s important to prepare yourself to put in time, effort, and patience to fly fish competently. Lastly, if you’re new to fishing, it is best to start with a spincast or spinning reel.

2. What Style of Fishing Is the Reel Best Suited For?

Baitcasters are also versatile, but require a greater skill level to fish with them.

On the other hand, fly-fishing reels are best for fish coming up to feed on the water surface.

For the other reels, trolling, surf, and offshore, they have more specific uses, usually based on their names. For example, choose an offshore reel if you prefer offshore fishing.

3. How Much Does a Fishing Reel Cost?

For the vast majority of us, the cost is always an important factor in making any purchase. Fortunately, you don’t need to spend a fortune to get a decent reel.

They will often offer smoother action due to a higher number of bearings in the gears and longer-lasting overall design.

If you plan on fishing a lot, then all of these features can be well worth the investment. However, if you don’t fish often, you may not be able to get your money’s worth.

If you’re also a complete beginner, it’s not worth investing too much in your fishing gear. At least wait until you know whether you like it or not.

4. How Long Will the Reel Last?

How long your fishing reel will last depends on its built, how much you use it, and how well you’ve cared for it.

If the reel is good quality and you clean and lube it regularly and have it serviced every year or more, there’s no reason it shouldn’t last a lifetime.

If something goes wrong with your reel that you’ve spent quite a bit of money on, it’s worth seeing if it can be repaired. Sometimes it’s just a matter of getting the level wind or pawl replaced.

There are several instructional videos online that can help teach you how to clean and maintain your fishing reel.

You’ll also find countless videos that will help you fix your fishing reel. This means you just have to buy new parts. Failing that, it still might be worth holding on to your old broken fishing reel in case you can use it for parts in the future. That is specially if you plan on buying more reels from the same manufacturer.

If your fishing gear has been sitting around for a while, you may wonder if it’s still good to use.

In this case, you’ll also need to consider the lifespan of your fishing line.

Monofilament has a shelf-life of around two to three years, while fluorocarbon lines will last longer at roughly seven years. A braided fishing line will also last a long time.

If in doubt, throw your old line out. You should replace your fishing line before it starts losing its strength. This will help prevent it from getting snapped off when a big fish bites.

If you’re still struggling to choose which fishing reel is best for you, why not investigate what kind of fishing opportunities you have nearby?

Consider: What kind of fish will you go for? And will you need to cast out quite far or accurately?

Refer back to our descriptions of the different reels. Then it should become clear which reel is the most appropriate.

If it turns out that you like fishing, then it’s more than likely you’ll end up owning more than one reel. Many people who fish own at least a few different types of fishing reels to enjoy various types of fishing.

As the season changes, so do the opportunities for recreational fishing. Plus, it’s fun trying them all to see which you enjoy the most!

Fishing is a fun hobby and sport. It gets you out in nature and is also productive. It allows you to bring home fish to enjoy.

How to make a fishing rod