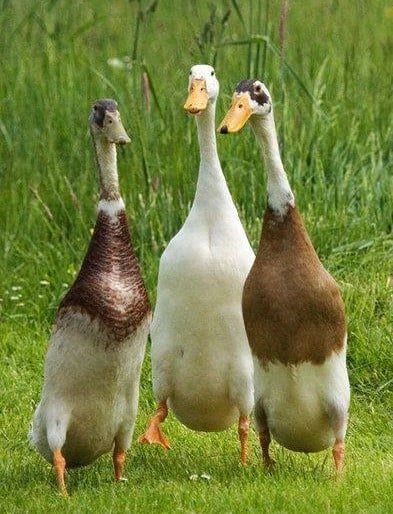 Indian runner ducks are known for their upright, slender bodies that resemble bowling pins. They resemble penguins more than any other duck breed, but they can run quickly.

This domestic duck cannot fly. People usually raise them for their eggs rather than meat because they are lightweight ducks.

Runner hens lay 300 or more eggs per year making them a great duck breed for eggs. They are active foragers making them ideal for insect extermination as well.

Keep reading to learn all about Indian runner ducks and why to consider them for your backyard farm.

When considering raising ducks, consider your purpose for raising them.

Runner ducks are reliable egg layers. While they are classified as lightweight ducks bred for eggs, you can use them for meat. They are tasty and make for a fine table bird. It’s just that they aren’t as large as meat ducks which were bred specifically for meat.

Other reasons to keep runners are they are easy to keep in a mixed flock. They will help manage insects and slugs. People keep them for the organic fertilizer they produce.

All the while, Indian runners are friendly, which makes them a productive pet. Indian runner ducks live for 8 – 12 years with proper care.

An Indian Runner duck will stand at about 20 – 26 inches tall and weigh between 3 – 5 pounds. Males weigh more than females.

Runners are considerably lighter than a Pekin duck which was bred for meat and weighs 7 – 9 pounds.

You can tell the difference between Indian runner drakes and hens as the males have curly tail feathers and the females are flat. However, you may not notice the differences until they have matured.

Indian Runner ducks have a lean, vertical stature with an upright stance. This breed is sometimes called a penguin duck, a bowling pin duck, and also considered to be a long necked duck.

Their bodies are cylindrical with legs further back than most duck breeds. This leg positioning allows Indian runners to run quickly rather than waddle.

Indian runner hens will rarely go broody and won’t hatch their own eggs. Being captive-bred, hens have lost many of their maternal instincts.

If you want to hatch fertile eggs, you’ll need to collect, incubate, and hatch baby ducks on your own.

These ducks have an outgoing personality. They are vocal when they dislike something, but they have exuberant enthusiasm. Hens are louder than the males.

You’ll enjoy having them in your flock as they are active, hardy, friendly and social though some can also be timid, anxious, and skittish. These ducks are fun to watch.

Health-wise, Indian runners are hardy and can withstand heat and cold without illness. Provide shade in the summer and a dry and warm shelter in the winter, and they be fine.

Their main health issue is worms. You will want to worm the ducks you purchase immediately and continue worming every three weeks for the first two months. Then, you worm them every six months unless you notice a health problem.

We also recommend dusting their heads for parasites. Mixing diatomaceous earth into their feed can deworm them naturally, or you can use a commercial wormer.

As far as duck eggs, runner duck hens can lay 300 – 350 eggs each year – that is nearly one egg a day! The eggs are jumbo in size with a green, white, or blue coloring.

If you want to raise ducks primarily for eggs, you should consider investing in Indian runner ducks as they are reliable layers. Hens can lay eggs consistently for four to five years until the amount diminishes.

Add a male to your flock if you want to hatch fertile eggs. Runners have high fertilization rates though hens don’t typically sit well, though some do. A domesticated breed, overall they didn’t develop maternal instincts to brood their ducks.

If you don’t have broody runner, and you have another breed of broody hen, she may sit and hatch Indian runner ducklings for you.

If not, you can collect the eggs and place them in an incubator. Raise ducklings in brooder. After they are a month old, they can spend time outdoors in the sunlight and return to the brooder at night.

In addition to laying in their nests, runner ducks also drop eggs wherever they are due to the high production quantity, so you will need to keep them in a duck coop at night.

Since Indian runner ducks are one of the smaller breeds, they are considered a light class in terms of meat production. Nonetheless, they breed quickly and have a solid flesh-to-bone ratio, making them a decent meat breed. Their flavor is similar to wild duck.

You will not often find fat on an Indian runner, and one mature duck can feed two people. One could readily raise several for egg and meat production if they wanted.

These days, more people raise Indian runner ducks for exhibition and shows due to their unique appearance. If you are not interested in pageantry, they also make a beautiful ornamental duck for your farm.

As far as husbandry requirements, runner ducks are one of the more low-maintenance breeds. They prefer large spaces to run around and forage for insects.

Runners will need a secure shelter to protect them from predators and from weather. They don’t roost so they won’t need roosting bars like chickens.

They will be fine to make a nest with bedding on the coop floor. Hens typically lay their eggs in their straw nests and don’t require nesting boxes.

Try to keep their duck house clean and dry. Allow a minimum of four feet of space per duck. It should be well-ventilated.

What to Feed Indian Runner Ducks

As far as feeding, this breed in particular enjoys foraging. If you are able to provide them with areas to eat insects, slugs, grasses, and other foraging foods, they will be content.

Offering the space to roam and a pond will decrease their needs for duck feed as they are active foragers. You can find them eating mosquitoes, larvae, grass, fish, snails, wild greens, slugs, and crustaceans.

Though not necessary, having a small pond for them to access their meals is highly beneficial to them.

For egg-laying hens, you’ll also need to feed them layer pellets or layer feed. While the drakes don’t need the extra calcium, they can also eat it.

Can ducks eat chicken feed is a common question when you are raising a mixed flock. However, it’s best to give the ducks the food made for them, especially when the ducks are young. Ducklings will require a starter grower. Learn what to feed ducklings to meet their nutritional and growth needs.

Ducks and geese can typically eat the same feed made for waterfowls.

Indian runners enjoy swimming more than most domesticated breeds though it’s not necessary to have a big area. A small kiddie pool will work just fine. They’ll enjoy dunking their heads in it.

You’ll also need to set up a watering system for them. They require clean, fresh drinking water daily.

They originated in Maritime Southeast Asia, most likely from the Indonesian islands of Malaya, Bali, Lombok, and Java. While scientists have confirmed their existence for the last 200 years, hieroglyphic records in ancient Javan Temples indicate that Indian Runner Ducks may have lived in Indo-China 2,000 years ago.

Indian runner duck herders often had flocks of 1,000 that would roam throughout Bali and India to reach the markets where their eggs were sold. The ducks would forage on trails during the long journey.

By the 1800s, the duck made its way to Europe. The name “Indian” comes from the East India Company. Indian Runner Ducks became popular for duck breeding in the 1800s throughout the United Kingdom and Europe because of their massive egg production capacity.

When they first arrived in the United States, Indian runner ducks were called Penguin ducks because of their appearance.

In the 16th century, Indian runners nearly went extinct in Western Europe due to extensive cross-breeding. People wished to integrate their beauty and personality into other ducks.

Now, the Livestock Conservancy considers them a recovering species. They also have a society devoted to them in the Indian Runner Duck Club.

Indian runner ducks are a unique breed that can bring joy to your farm. With their outgoing personalities and high egg production, you can find entertainment and utility in these ducks.

Providing them with a kiddie pool and areas to forage will keep them content. Indian runners are friendly, docile, and active ducks. They are low-maintenance foragers and keep to themselves.

While they may seem more like penguins or bowling pins at first, you and your other ducks will soon grow to love your Indian runners.

If you are considering a meat breed, consider raising a Rouen duck or Pekin rather than runners.