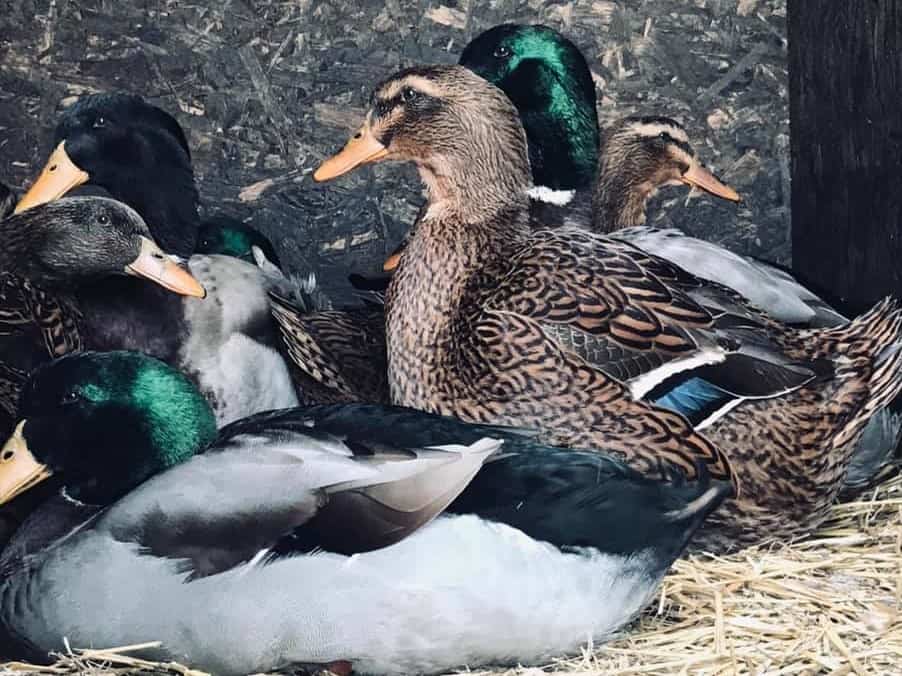 If you’re on the market for ducks to raise, the Rouen duck is an excellent choice. They are a large breed, well domesticated, offer delicious meat, and require little maintenance. In addition, they are excellent foragers, making them ideal for pest control.

Rouen ducks are not great egg layers. They are usually kept and bred for their meat. Rouen meat is considered one of the two best types of duck meat available, known for its incredible flavor and lean texture.

They are also kept for ornamental purposes or as exhibition ducks. They are not considered to be a dual purpose breed. Breeders designed Rouen ducks for meat production, though they are slow growers.

Here’s what to know about welcoming a Rouen duck to your farm.

Rouens are a heavyweight breed. Within the Rouen breed, there are two types of ducks:

Size is one of the biggest distinguishing factors of these birds, with the production Rouen weighing 6 – 8 pounds and the standard Rouen weighing 9 – 12 pounds.

The production-bred is the most common type people use when raising Rouen ducks for meat since they grow slightly faster than the standard-bred.

Rouen ducks are not ideal for commercial duck farming because they are slow to reach their full size and considered to be slow-growing birds. Although they have excellent quality meat, they do not reach their full weight until they are about a year to a year and a half old.

People usually wait until their ducks reach at least 9 months before butchering them. That said, you can eat a Rouen as young as 4 months old—the duck usually weighs around 5.5 pounds and has a lighter texture.

It’s important to note, if you wait to butcher your Rouen ducks until they reach one year or older, you’ll get to take advantage of more meat on their 8 or more-pound bodies. The meat also has a bolder, more desirable flavor once the Rouen reaches that age.

Also note, this breed produces leaner meat than a Pekin duck, which is the most popular commercial meat duck.

If your goal in having Rouen ducks is to bring a basketful of eggs to the breakfast table every morning, we advise you to look elsewhere. Hens usually lay under 125 eggs per year, with an average production of under 50 eggs. Egg laying varies widely, depending on the hen.

You can expect your hens to begin producing eggs at around 4 – 7 months old. Rouen eggs are large. They are larger than chicken eggs though the duck egg yolk is of similar size. Compare duck eggs vs chicken eggs.

They typically lay white eggs. However, they’ll sometimes surprise you by laying eggs that have a slight blue or green hue. They usually lay 5 – 10 eggs at a time.

If you are looking for a heavy layer, consider Pekins or Indian Runner ducks over Rouens.

Because of their brilliant colors and friendly nature, some people raise Rouen ducks for pet and ornamental purposes rather than for eating. You’ll have the benefit of enjoying their eggs in the process. Additionally, they make excellent ducks for exhibition.

The American Poultry Association welcomed Rouen ducks onto its roster in 1874. Nowadays, this domestic duck often places well in competitions, especially in the heavyweight category.

Rouen hens have a deep brown body with lighter brown feathers woven throughout, making intricate designs. They have lighter-brown heads and a brown stripe that runs from the base of their bill to the feathers behind their eyes.

Like the Rouen drake, the female ducks have a beautiful iridescent blue mark on their wings.

They have a docile, friendly, and easy-going temperament.

If you raise a drake with your hens, you can hatch fertile eggs. The Rouen duck incubation period is 28 days. The females are bulky and can sometimes crush their eggs during the incubation period.

Rouen drakes are more colorful than Rouen hens. They have iridescent green heads that trail down their necks. A white collar — a circular ring — divides the green from the remainder of their bodies, which is a primarily smoky gray color.

Male Rouen ducks also have blue speculum feathers like the females, black on their tails, and brown on their chest.

If you plan to raise a drake with your hens, you’ll need a minimum of 4 hens per drake but keeping 6 hens or more is better. Male Rouens are known to be very aggressive.

It may surprise you how similar Rouen ducks look to the Mallard ducks swimming around your nearby pond. Rouen hens and Rouen drakes both look almost identical to the Mallard hens and Mallard drakes. There’s a historical reason for it. The French and British used the Mallard to breed a larger duck with brighter colors, creating the domesticated Rouen we know today.

Adult Rouens are larger than Mallards. Though size is a big factor in telling the difference between a Rouen and Mallard, it’s a little harder to tell between ducklings. Buy Rouens from a reputable breeder.

When purchasing Rouen ducklings, check to see if they have a strip that runs beneath their eye. If so, they’re a Rouen duckling. Otherwise, if you only see a stripe that runs across their eye and not under their eye as well, those are Mallard ducklings and not the kind you want to raise if your goal is to have them for meat.

When it comes to deciding between duck breeds, it’s also important to consider your climate. Rouen ducks are very hardy birds and able to tolerate most all climates.

Their home can be a typical duck house with plenty of soft bedding and warmth. Their pond can be a kiddie pool or a small pond in your yard near their home.

The duck house should be a ventilated space that keeps them out of harsh elements year round.

Rouen ducks are an excellent bird for people new to raising ducks because they’re docile and easy to take care of. Below are some tips to get you started on raising healthy, happy ducks.

Because they’re so heavy, Rouen ducks aren’t great flyers. That’s good news for you because it means you can get away with installing a low fence.

However, these ducks are foragers, so it’s important to offer them plenty of space so they can search for food and live a life similar to how they would in the wild. They require an area to forage on dry land.

2. They Need a Water Source

Ducks are waterfowl. If you plan to raise them with access to a pond, they will be in their glory.

However, you can also raise these domestic ducks with a small pool for splashing and paddling around. At the very least, they’ll need to be able to dunk their entire head in an open water source in order to keep their mucous membranes moist.

They will also likely prefer to drink open water from the pond or pool, rather from a duck watering system with a nipple. Providing an open source of fresh, clean water daily is important.

3. Keep Them Out of Harm’s Way

Your Rouen ducks won’t likely fly over a low-lying fence. However, hungry foxes, coyotes, raccoons, badgers, and other animals will eat backyard ducks. Therefore, it’s important to lock up your Rouen ducks in a safe duck house and enclosed pen area at night.

Make sure their house doesn’t have any holes where predators can enter, and bury the frame at least a few inches into the ground in case something tries to dig its way into the pen.

Although you should give your Rouen ducks plenty of space to forage their own food, you should also supplement their diet with nutritious pellets. Duck pellets you find at your local farm store will do. Ducks shouldn’t have chicken feed.

Also, it’s important to know what to feed ducklings, as they eat differently than mature ducks.

How to Sex a Rouen Duckling

After about eight weeks, the males will develop curly tail feathers along with a raspy, deep quack, while the females will have a light, loud quack.

Males will develop thick heads, and after about 15 weeks, their green heads will begin to show. Rouen drakes can also be distinguished by a dull green bill after about six weeks, while the female bill will look orange or brown.

This duck breed originated in France. Other names for a Rouen duck include: Roan, Rohan, Rhone, and Rouen Fonce.

These ducks do not fly well. Rouen ducks will not fly away if you raise them with with pond access. They won’t stray far from their original home and water source, so they are great as a free-range pet as long as they have protection from predators. They like to stay as close to their nests as possible.

Yes, they Rouen ducks will lay eggs year round. However, they aren’t the best duck breed to raise for eggs. Plan on them for their

How Can You Tell if a Rouen Duck is a Male or Female?

Drakes have a white ring around their necks. You can also check the color of the beaks. Female Rouens have orange beaks while the males will have a green-tinted or yellow beak.

When it comes to sexing Rouen ducklings, you can a few days after hatching. However, wait two weeks before doing a vent check.

Rouen ducks have a mild temperament. They’re social ducks that get along well with each other and other birds. They’re also easy to tame compared to certain other duck breeds. They can even intermingle with different types of animals. Not only are they gentle and friendly, but they make excellent show birds.

If your Rouen hen has eggs, the drake can get protective. Therefore, it’s best not to get too close to its nesting site during that time.

What Do Rouen Ducks Eat?

Rouen ducks eat a typical duck diet consisting of aquatic vegetation, insects, seeds, snails, and more. As pets, you can feed them a store-bought duck feed and treat them to seeds, leafy greens, fruits, and grains.

How Long Do Rouen Ducks Live?

If you’re raising your Rouen ducks for exhibitions or egg production, you understandably want to know how long you can expect them to live. Typically, these ducks can live anywhere from 5 – 9 years, assuming you provide them with excellent care.

How Many Eggs Do Rouen Ducks Lay?

Rouen ducks are not known for their egg-laying capabilities. Exhibition Rouens lay 25 – 125 eggs each year, and Production Rouens lay 150 – 180 eggs yearly. These are considered to be low numbers for duck eggs.

Rouen ducks are a joy to raise. Classified as heavyweight ducks, Rouen ducks have many great characteristics that make them wonderful to keep as pets and raise for meat. They easily adapt to many different environments.

As long as you don’t mind waiting for them to grow and their sporadic egg-laying, they’re a tasty food source and entertaining to have on the farm. As far as your return on investment, you can expect utility Rouens to weigh 6 – 8 pounds at 12 – 15 weeks.

While they are not known for their egg production, they do lay large eggs.

If you’re new to the duck raising world or raise other duck breeds, this is a good meat duck to consider raising alongside other backyard farm animals. Farming Rouens for food is an excellent option as they produce lean, delicious meat.

These are great ducks for beginners as they do well as backyard ducks.