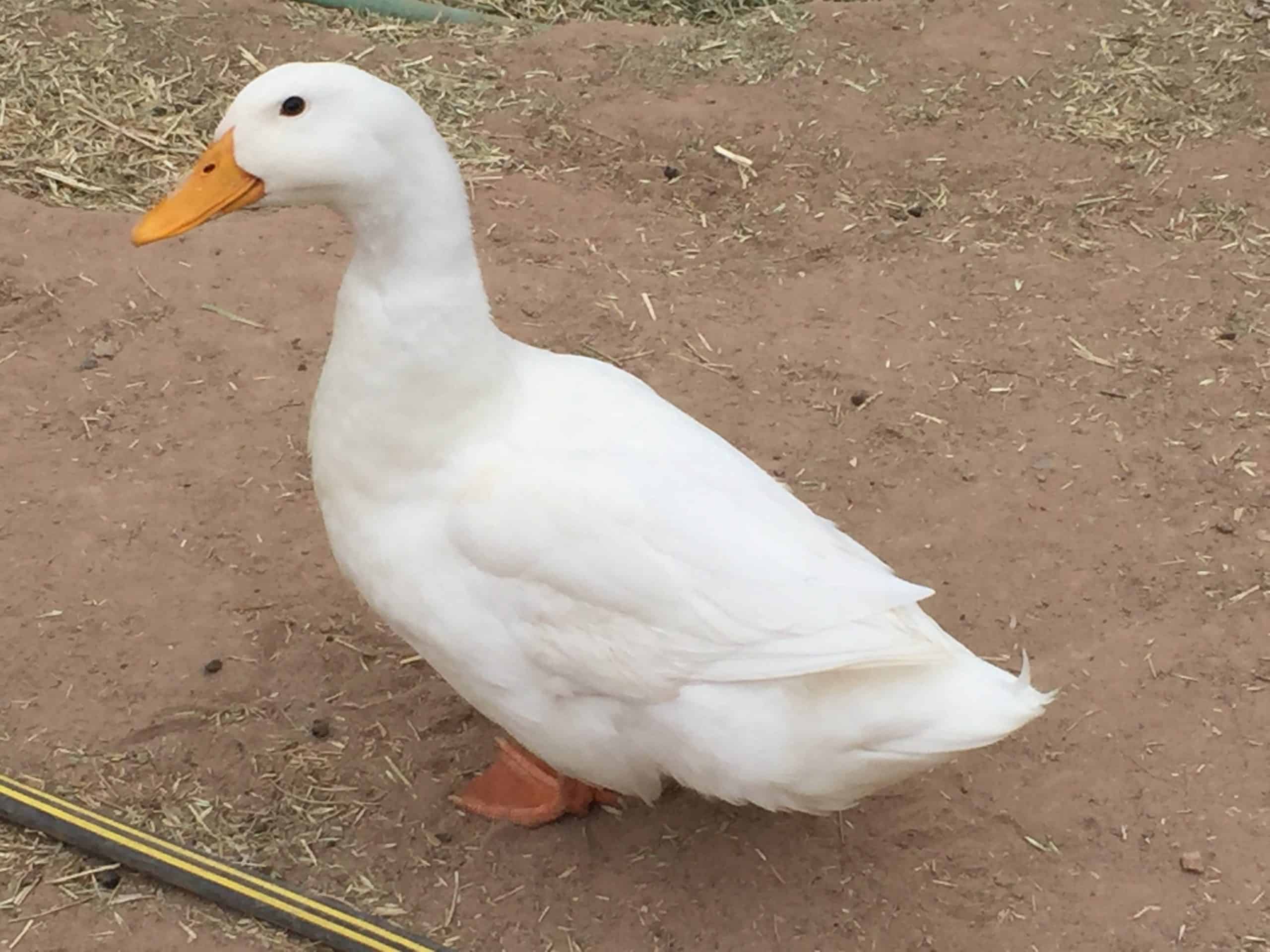 The Pekin duck is among the most popular domestic duck breeds worldwide. Here’s what you need to know for raising this white duck successfully for meat, eggs, as a pet, and other uses.

Pekin ducks, an American breed also known as the White Pekin or American Pekin, is one of the most recognizable breeds for many North Americans.

Its feathers are all white, contrasted only by its orange bill, legs, and feet.

Researchers believe that the original domesticators preferred white feathers because it made the ducks look cleaner after plucking for meat production.

If it had more color variation, the Pekin would have pigmented spots on its skin from darker feathers, which some might find unappealing.

White Pekin ducks are suited for meat production. In the United States, the commercial duck industry consists mostly of this breed. This makes them worthwhile to raise in your backyard.

In addition to meat, other reasons people raise Pekin ducks include producing down (e.g., using the down feathers for clothing) and for Pekin duck eggs.

This breed is widely recommended for backyard farmers and beginning poultry farmers. Some people start off keeping Pekins as pets while enjoying their eggs.

Female Pekins make poor setters and rarely go broody. They are non-setters. This means hens aren’t inclined to sit on their eggs in order to incubate them for hatching.

The advantage to this is that it makes egg collection easy. To increase egg production rates, humans bred this behavior out of this breed.

Therefore, if you wish to hatch Pekin ducklings to raise or sell, you’ll need an egg incubator to hatch ducklings yourself. You’ll also need to raise a drake with the females to produce fertilized eggs.

It’s not common for this breed to raise a brood on their own.

For some people, it’s an asset to keep Pekins because they don’t go broody. Some hens may display brooding tendencies but it’s not typical. Instead, the eggs are cared for and hatched with the help of artificial incubation.

Pekins have a large, round body, just like the mallard.

Duck breeders readily appreciate this animal’s plump body type. However, it’s not so great for the duck, practically speaking. Their heavy bodies prevent them from flying like their wild counterparts.

This is a relatively long-lived duck. Their lifespan is an average of 10 – 15 years in captivity, so they’re quite the investment if you’re raising them for eggs.

These domesticated ducks weren’t bred to live in the wild. White Pekin ducks fly but not like other duck breeds. This can make them a target for predators.

If you raise them right, you’re likely to get a high ROI (return on investment), whether you’re working toward becoming self-sufficient in your meat production, egg production, breeding, or looking to start a small homestead business.

How to Sex a Pekin Duck

To keep a productive flock, you’ll need to know how to tell your lady ducks, known as hens, from your gentlemen, called drakes. The easiest way to distinguish the two without even having to handle the bird is by listening to their quacks.

Hens have loud quacks that sound more like a honk. One identifying feature of drakes is their drake feather, a curly feather you can find at the end of their tail. These differences will become obvious around ten weeks old.

A more reliable method for sexing Pekin ducks involves venting. This should be done within the first few days after hatching. After that, it’s pretty challenging to sex them.

To vent Pekin ducks, locate the outer opening of the cloaca and very gently pull the skin down and outward. If a penis pops out (which, for ducks, is the shape of a corkscrew), you’ve got a boy.

Experts recommend against raising male ducks since they can become aggressive. However, if you want to hatch fertile Pekin duck eggs, keep the ratio at 12 hens to one drake at the least.

Baby Pekins are not white like their adult relatives. Instead, you can recognize baby Pekin ducklings by their bright yellow plumage.

It’s important to know what to feed ducklings to meet their nutritional and growth needs.

When they are babies, provide them with a shallow bowl of water so they won’t drown. It should be for drinking and not for splashing or paddling.

Mature Pekins will use it for floating and preening. Preening is a way ducks keep themselves clean. They produce a waxy coating they spread on each feather.

Other aspects of raising ducks are pretty straightforward. Here are a few of the most important criteria to meet for general duck-rearing and tips specific to the Pekin breed:

Since the American Pekin duck can’t fly well, you won’t really have to worry about having a tall fence. A short 2 foot fence will keep them in just fine.

You don’t have to have a pond to raise Pekin ducks, although it would be extremely beneficial to their health and wellbeing. Many people prefer to raise them with open ponds stocked with fish to develop a sort of small, self-sustaining ecosystem.

Otherwise, you can fill a kiddie pool with water. They will enjoy splashing and paddling. At the very least, they require a means to submerge their heads in water for their mucous membranes.

Recall that humans bred brooding behavior out of Pekin ducks. Because of this, you’ll need to take care of the incubation yourself and ensure the hatched ducklings are warm.

Ducklings need temperatures around 86°F to be comfortable and thrive until they fully develop their down and feathers. Developing and laying adults’ optimum temperature is 55°F.

Only incubate fertilized eggs. This means you’ll need to have a male duck.

Each duck needs a minimum of 0.31-3.02 square feet of living space, depending on its age. The youngest ducks fall on the lower end, while mature laying hens need the most space.

You’ll need to have a secure coop for them to protect them from predators. Ducks and chickens are compatible. Many people raise them together. Learn how to build a duck house.

These ducks need more water than your average chicken or turkey, especially since their waste is more than 90% moisture. Make sure they have plenty of fresh and clean water available to drink at all times. They’ll prefer to drink from open water sources rather than using waterers specially made for chickens.

Be sure to keep their bedding as clean and dry as possible to prevent bacterial or other illnesses.
It will also help keep parasites and diseases away. In addition, the eggs will be cleaner and the ducks healthier overall. This is especially important if you are raising meat ducks.

You can feed Pekin ducks using a feeder that’s designed for other poultry types, like chickens. Troughs are a good choice, too.

To ensure you get the appropriate feeder size, make sure each duck has a minimum of 2 inches of linear feeder space.

Pekin ducklings eat as often as chickens. They can eat up to 3.5 ounces or more pellets in a single feeding by four weeks old. General poultry feed is just fine.

They’ll also benefit greatly from free-ranging. You can also supplement with chicken scratch or small amounts of corn.

Timeline for Raising and Butchering Pekin Ducks for Meat

Pekin ducks are a fast-growing breed, another reason why they’re among the most popular ducks for meat production. The Pekin accounts for 90% of the duck meat production industry in the US.

Commercial producers can generally grow a duck up to its mature weight, 7 – 8 lbs, in as little as seven weeks.

Fortunately, it won’t be much different at your homestead. Small farmers can raise a 6 – 7 pound Pekin in only seven to eight weeks.

If you want to reduce the amount of time your duck needs to reach its ideal weight, your best bet is to go with a genetic strain known to produce high-quality and high-quantity meat.

Unfortunately, this option is really only available to large-scale duck meat producers, which is why so much of the ducks in grocery stores are meatier than those you’ll see on homesteads.

Just make sure not to raise them past the age of ten weeks. Once they pass this threshold, it’ll be extremely challenging to pluck their skin due to “pin feathers.” These are new feathers growing where an old one has fallen off during a molt, the equivalent of shedding in birds.

American Pekin duck hens lay roughly 200 eggs each year. They’re not particularly known for their egg production capacity, yet it is another perk of raising these ducks on your homestead. This may change in the future, as people have developed new lines of Pekin or “Pekin-like” ducks, especially for egg production.

Your hen will likely start laying around 26 – 28 weeks of age. After this, you can keep it for about 40 full weeks of production.

Just keep in mind that your duck may not lay every day, as experts pin them at a production rate of 90%, meaning 100 ducks should lay 90 eggs each day.

On a more realistic scale for a homestead, that’d translate to 9 eggs per ten ducks daily.

Other breeds, like the Campbell and Runner ducks, are preferred for their egg-laying rates, which usually top out at about 300 eggs annually, significantly outperforming the Pekin.

The Pekin duck arrived in the United States not long ago, first being introduced from China in 1873. There, in its country of origin, people first domesticated its immediate ancestor, the mallard duck, in a single domestication event just over 2,000 years ago.

This “birthday,” so to speak, makes it significantly younger than the world’s first favorite poultry source, the chicken. Records show that yummy bird was domesticated around at least 2,000 BCE.

Instead of the colorful plumage (a collective term for a bird’s feathers), you’d recognize on a mallard, complete with beautiful, earthy hues, the Pekin duck is beautiful in its own right, but it does not boast any of these vibrant hues.

A raft of Pekin ducks can become the primary source of income for some families.

One of the most common ways to raise Pekin ducks is by using a traditional herding system. This practice is better suited for larger flocks. For example, traditional Indonesian duck farmers keep flocks of 90 – 130 ducks per herdsman.

This practice is common among small farmers and can be used to manage groups of ducklings or adults.

When raised this way, farmers typically feed them in fields, allowing the ducks to glean (a type of foraging behavior where the bird picks meticulously for food) their feed as they go.

Hens are louder than males with their quacks. Overall, they are quieter than geese and louder than chickens.

This American breed of domestic duck is an excellent poultry choice for your homestead. Whether you’re raising them for meat, eggs, down, or all of these uses, you can bet they’ll give you a high return on investment due to the ease of raising them and their high meat content.

They also make for productive pets. Hens are easy to raise. Another breed to consider for meat is the Rouen duck, though they don’t lay as many eggs as Pekin ducks.