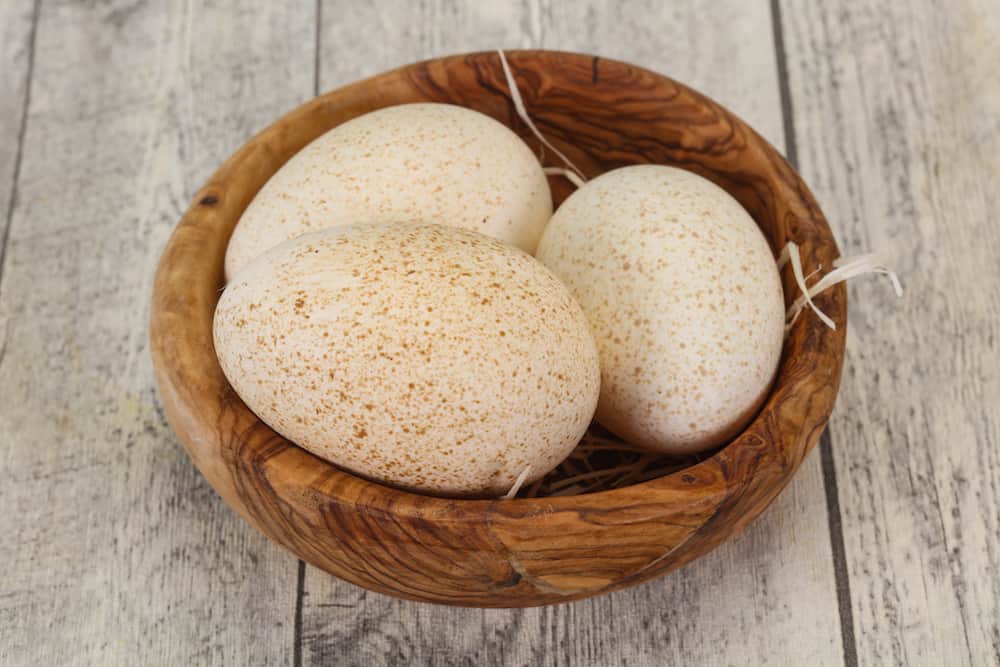 Here’s what to know about turkey eggs. The domestic turkey is a large fowl native to North America and characterized by its blue and red head with a prominent snood and wattle. It is often rotund and considered a form of poultry.

As domesticated birds, you would think people would eat more of their eggs. After all, people consume turkey meat. Many homesteaders raise turkeys from chicks.

However, turkey eggs never seemed to catch on as a type of food.

Here we answer the questions: Is it possible to eat a turkey egg or can you eat turkey eggs, and, if so, what do the egg look and taste like?

We answered some of the most commonly asked questions about turkeys and their eggs.

1. How Often Do Turkeys Lay Eggs?

The average domestic or wild turkey might lay at most two eggs in a single week. This is a big difference from chickens, which can lay an egg a day and still be healthy.

A turkey hen will also only lay one clutch per year in the spring. The clutch refers to a batch of eggs.

Clutches can be large or small, containing anywhere from two to 14 eggs. This means a farmer can expect to receive over 300 eggs from a chicken but might only get 100 from their best turkey hen.

A turkey egg is larger than that of a chicken and tends to be creamy or off-white with yellow or brown speckles. They are oval and tend to have pointier ends than the eggs of a duck or chicken.

The interior looks similar to that of a chicken. It has a noticeable white portion, plus a yellow yolk. The membrane between the shell and the egg is thicker than in a chicken egg. Also, the eggshell is thicker and will be more difficult to crack open, especially for someone used to a chicken egg.

The size of a turkey egg varies considerably based on the size of the mother hen and her overall nutrition and wellness. In addition, heritage breed turkeys produce larger eggs than their smaller counterparts.

An average turkey egg can be between two and 2.7 inches in size, with an average circumference of five inches. The interior can have between 65 and 115 grams of material. They are about the same size as duck eggs.

Still, when you think of the size and how often do turkeys lay eggs, you can surely feed more people with one turkey egg or maximize its use as compared to a chicken egg.

When you ask the question, “Can you eat turkey eggs?“, the answer is yes. Throughout history, people have eaten turkey eggs. They are tasty and work well in cooking and baking. However, most people have never eaten a turkey egg.

In North America and Europe, the turkey egg was a staple of the cuisine. Europeans who traveled to North America took turkeys back to Europe in the 16th century and cooked the large eggs by boiling and simmering them.

Many believed that the turkey egg was better for baking and making rich sauces to pair with  meats.

The eggs soon fell out of favor. In the 1500s and 1600s, some French chefs claimed the turkey egg was responsible for the increasing number of leprosy infections in the country.

Poorer people were also unable to afford the rich eggs and did not have the land to raise turkeys themselves, which drove the cost up and made the eggs a luxury only the wealthy could afford.

In modern North America, the reputation of the turkey egg has yet to recover. Turkey eggs are difficult to find in grocery stores. Even on Thanksgiving, a holiday dedicated to the turkey, people would still make deviled eggs from standard chicken eggs than those of a turkey.

On the contrary, people who raise turkeys are more likely to consume the unincubated eggs because of their similarities to chicken eggs.

If you do choose to eat turkey eggs, they can be used in most standard chicken egg recipes as long as you account for the new mass.

The taste is similar but is richer in fat and cholesterol due to the increased size. 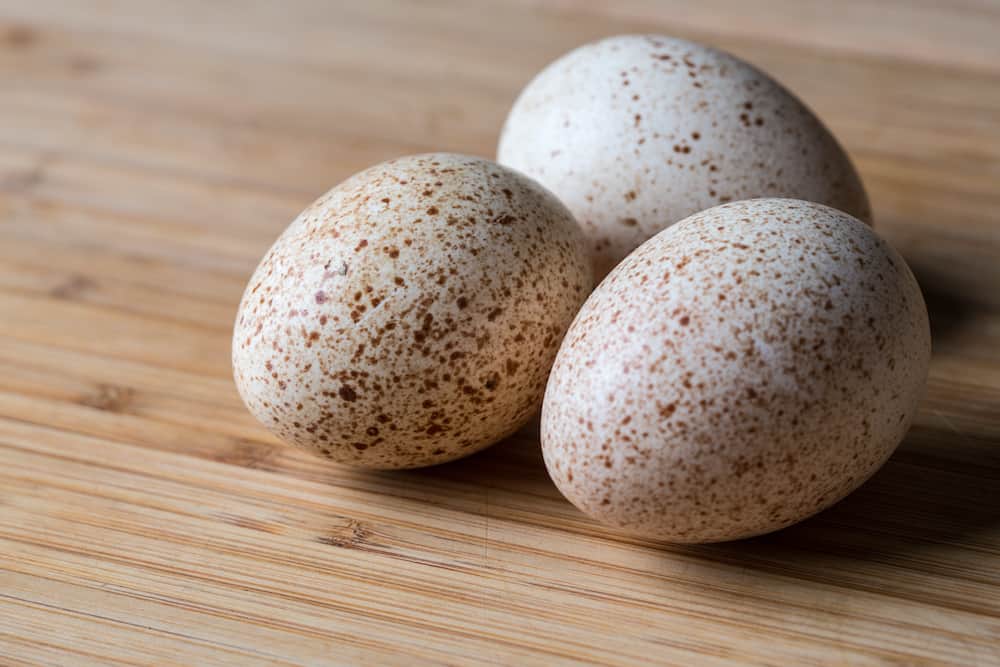 When the answer to the question “Do people eat turkey eggs?” is yes it can be confusing then as to why aren’t people eating them. There are two simple reasons: They are expensive and difficult to acquire.

Unlike chickens, which are egg-laying dynamos capable of laying an egg almost every day, turkeys have specific breeding seasons and only lay during the spring. That increases the average price of the egg.

In addition, turkeys lay less eggs per year than chickens do which means there is less supply.

While they make an excellent food source, many people who raise turkeys eat the eggs but don’t have enough leftover to sell. Also, they may raise gobblers (male turkeys) along with the hens and try to hatch the eggs and raise chicks.

Overall, the reason people don’t eat turkey eggs is because of economics. Turkey hens are larger than chickens. Therefore, they require more space and more food than chickens do. In addition, turkey hens take approximately 2 months longer to first start laying eggs than chickens do.

For all of these reasons, unless you are raising turkeys yourself for eggs, you will have a difficult time finding turkey eggs in grocery stores. Economically, it is too expensive. Farmers and commercial growers will earn more money raising turkeys for meat vs eggs.

No. When broken down and compared, the turkey egg has the same nutrients as the chicken egg. The main difference is that the turkey egg is far richer and contains twice as many calories, double the fat, and quadruple the cholesterol.

The turkey egg does make up for the increased caloric intake by being twice as large.

So, what kind of nutrients can you expect to receive from eating a turkey egg? Here is the breakdown of an average 3.2-ounce of an egg with the shell still intact:

The greatest difference between turkey and chicken eggs when it comes to nutrition is the chicken egg has a greater amount of vitamins E and D, which are essential components of the human diet.

If you do eat a turkey egg, you will discover it is thicker and richer than the standard chicken egg.

7. Where to Buy Turkey Eggs?

While you won’t find turkey eggs in grocery stores and local markets, you may be able to find them in the spring at farmer’s markets. Another option is to contact local turkey farms in your area. You may also want to consider searching or putting a post up on a local website such as NextDoor. You may find a backyard flock owner willing to sell the eggs.

Turkey eggs are safe to eat and delicious. They are a bit richer and creamier than chicken eggs, though they taste very similar to each other.

In summary, it is much more expensive to raise eggs from turkeys than from chickens. Turkeys are larger and need more food to reach market weight. While you can use the eggs in the same way, chicken eggs are smaller so you will need to adjust recipes when using them in baking. However, if you are making omelets, etc., it won’t matter.

The turkey is the quintessential North American bird. If Benjamin Franklin had his way centuries ago, it would have been the USA’s national bird.

Despite the popularity turkey meat, most people do not consume turkey eggs. This is because they are expensive, and also more difficult to obtain when compared to easier sources like chicken eggs.

So, while you can eat a turkey egg, you might have a difficult time finding them at the average grocery store.

To avoid this problem, you can learn how to raise domestic turkeys and have access to delicious eggs in the spring as well as turkey meat. Raising turkeys and other livestock is the path to sustainability. Learn about the best egg laying chickens and best meat chickens.

Turkeys need more space than chickens, are prone to escaping, and can be quite territorial.

If you are a dedicated backyard farmer, though, there is no reason to shun the turkey in favor of duck breeds, chickens or quails. Take a risk and see just what the world of the turkey egg has to offer your palate!
Subscribe to our mailing list:
Your information will *never* be shared or sold to a 3rd party.